The pre-production and production of a "simple" group shot.

I was contacted by an organization that needed a photograph of a large group of people, in a neighborhood where the houses had solar panels, with some Chevy Volt automobiles.  I won't go into the specifics of the use or the program for which they needed the images.  I'm more interested in talking about how a "simple" shot like this comes together.  Someone has to organize it all, get the people there, figure out the best location and the best angles, etc.

In this case the client knew the neighborhood they needed to shoot in.  We had several "phone meetings" to discuss dates and details and then arranged to meet on site several weeks before the shoot to determine a location.  We met.  We drove around.  We got out and walked a few streets.  I used a compass to roughly determine the direction the sun would be rising.  We were using people from the neighborhood to comprise our group of nearly 100 and we needed to shoot early enough so we didn't interfere with peoples' work schedules, but late enough so we had good sunlight.  We aimed for 7:45am.

We needed to get approval from the city to block a street.  The client took care of that.  We needed to go house-to-house to let the people on the street know what would be happening so they could park their cars in alternate locations (since there were only houses on one side of the street and a park on the other only four houses were really affected...).  To lure volunteers for the group we needed to have breakfast tacos and hot coffee ready.  And some sort of "swag."  The client chose T-shirts as their giveaway.  Our client was amazingly good at all the detail stuff leaving me to concentrate on the photo stuff. 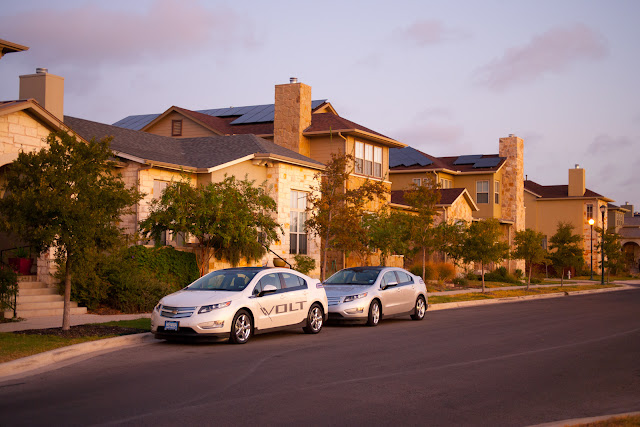 The morning of the shoot was glorious.  I got to the location at 6:30am to make sure no one inadvertently parked an unwanted car in the middle of our location, and also to walk around and savor the space before anyone else got there.  I love the quiet period before everyone starts piling in. 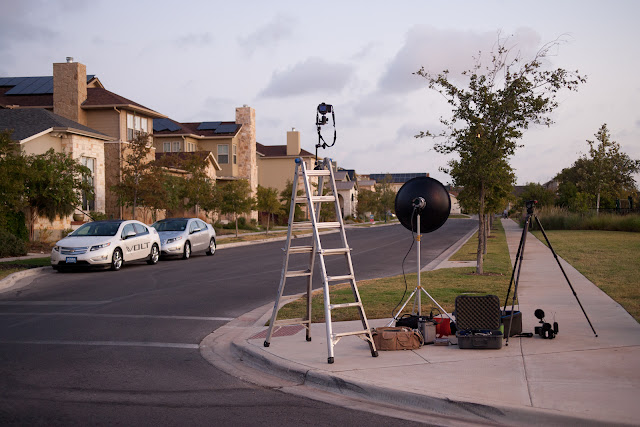 My set up and equipment was relatively simple.  When I scouted I found this angle which would let me fill the street with people and still reference the houses, with solar panels, off into the background.  Par for the course in shooting large groups it's important to get up high.  I brought along an extendible ladder and placed it (marking my territory) on the spot I would shoot from. 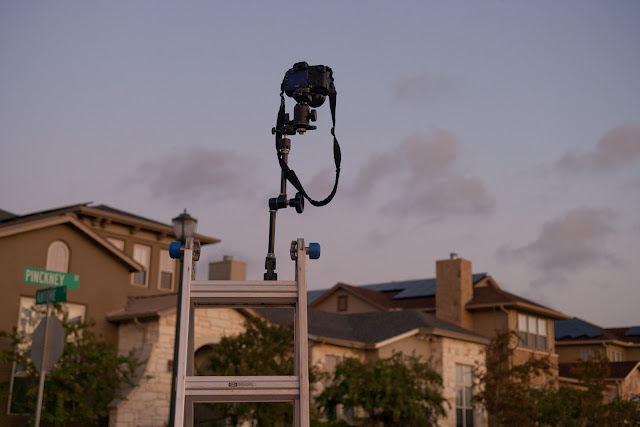 When I shoot from the top of a ladder I generally use a Manfrotto Magic Arm to give me another two feet of extension and to hold the camera still for longer exposures.  I love my ladder.  If folds down to around five feet and extends to nearly ten feet.  And it's sturdy. 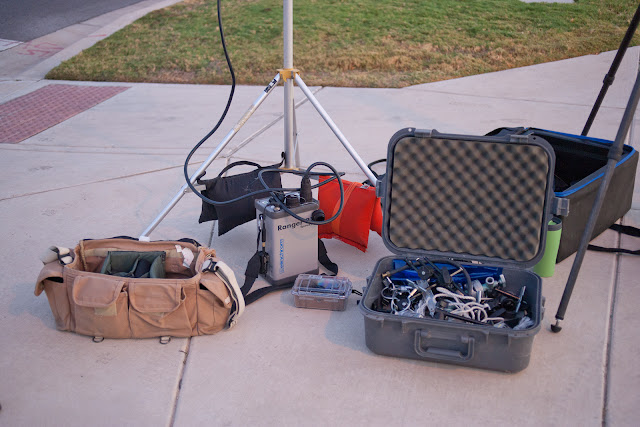 This is my pile of junk.  I always use Domke bags.  You can't be a pro if you are using something made of ballistic nylon.  It just doesn't translate.  Got some Australian bag or a some shiny black bag?  Just drive by the nearest dumpster and drop it in.  Get a Domke bag.  (I am unaffiliated with Domke!).
The flash is an Elincrom Ranger RX AS 1100 watt second pack.  Battery powered for my convenience. Please note the two twenty pound sandbags over the legs of the tripod.  Before I started shooting I also hung the 18 pound Ranger box on the Lowell stand as well.  And I'm glad I did because we had a couple of wind gusts that made me twinge.....
Just in front of the power pack is a little waterproof Pelican case that holds my Flash Wave radio triggers.  Two sets, just in case.  The case also holds all the batteries and assorted cables and alternative connectors.  The open, gray case next to it is filled with grip gear like Magic Arms and clamps of many varieties as well as rope, tape clothespins and more.  Just in case.
The tripod belongs to the video crew who documented the shoot and did some after the shot interviews. 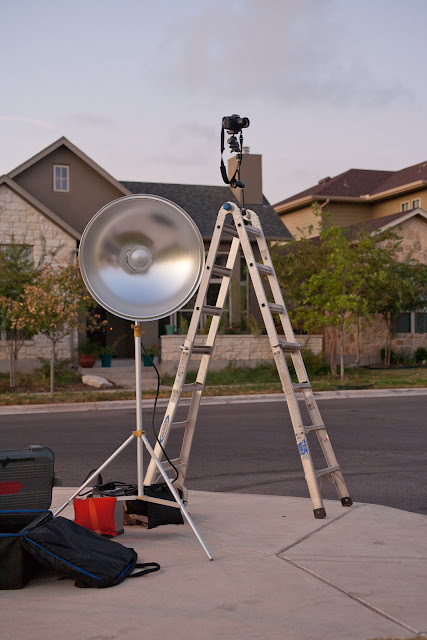 I used a 28 inch metal beauty dish reflector for the shoot.  I was depending on ambient light from the glorious sunrise for most of the light but I wanted to make sure I had a good strong light for fill light aimed from the camera position.  I was easily thirty or forty feet from the front of the group so I had to select a light and a modifier that would have the reach I needed and still not toss in ultra hard shadows.
The light stand is not fully extended here.  I did that just before I started to shoot.  But I knew that the higher the stand the more leverage the wind gusts would exert on the whole construction...... 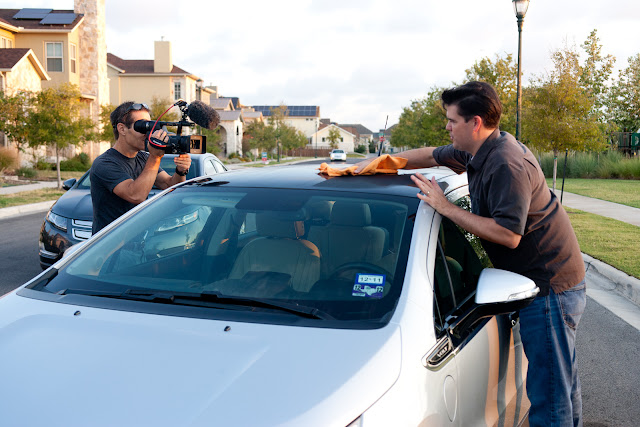 Once I had everything set up and tested I left a Canon 5Dmk2, with a Zeiss 35mm lens, on the tripod/ladder, pulled a Canon 1ds Mk2 out of the bag and walked around shooting some of the people and the last minute car preparation.  Not only did we have a video crew in attendance but also a stringer from the New York Times.  Nice guy. 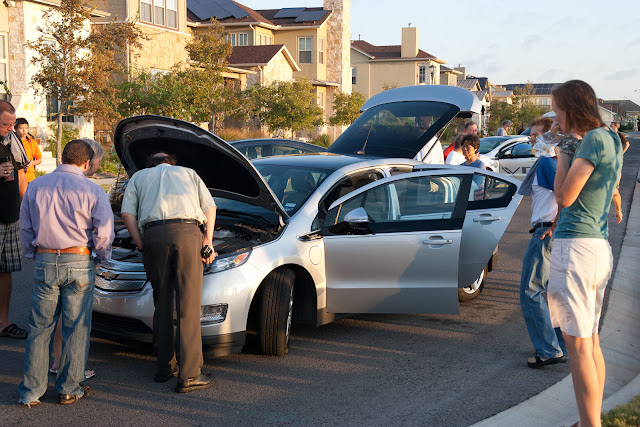 Everyone, myself included, was interested in the Chevy Volts.  We had four of them.  It's really cool technology.  At no time does the gas motor directly drive the car.  The motor is used at a constant and highly efficient RPM to drive a generator that powers the car after the original battery range of 40 miles is exceeded.  You won't get stuck somewhere.  Also, there's tons of new, smart technology that helps them make the power grid more efficient.  If they were in my price range I'd buy one. 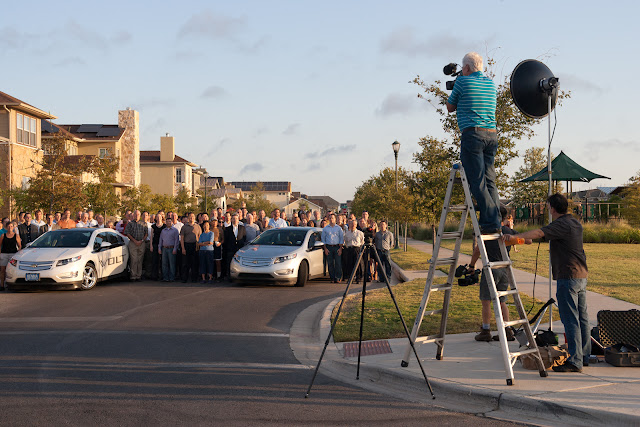 Once everyone had arrived I pulled the group together and placed everyone where I wanted them.  I shot twenty or so shots with the 5d2 set at ISO 100, f8.5 and 1/125th of a second shutter speed.  Then I got down off the ladder and let the video people (shown above) use the ladder to get a moving shot. The single hardest part of my job is always the part where we wrangle crowds of people.... 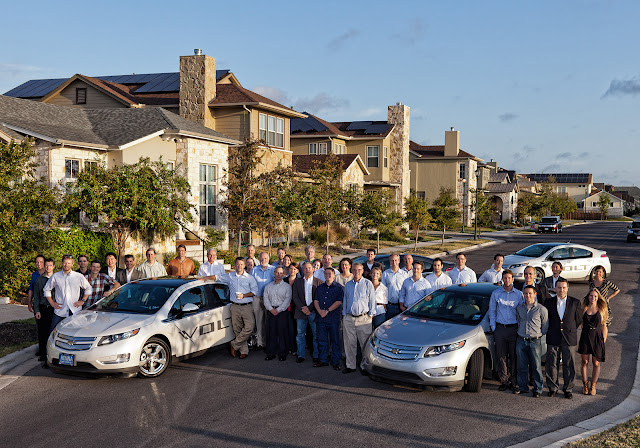 This final shot is of the dignitaries in attendance as well as staff members of the organization that hired me.  The morning's event got coverage in a number of places, including the New York Times.  I had some coffee and a breakfast taco with a University of Texas physicist and we discussed interoperability between the car batteries and the electric grid.  Interesting stuff when you realize electricity can flow in both directions.  Then I packed up the stuff, tossed it in the Honda Element and headed home to do some post production.
Not a glamorous shoot but fun, clean, and successful.  Just the way I like them...
Posted by Kirk, Photographer/Writer at 10:40 22 comments: