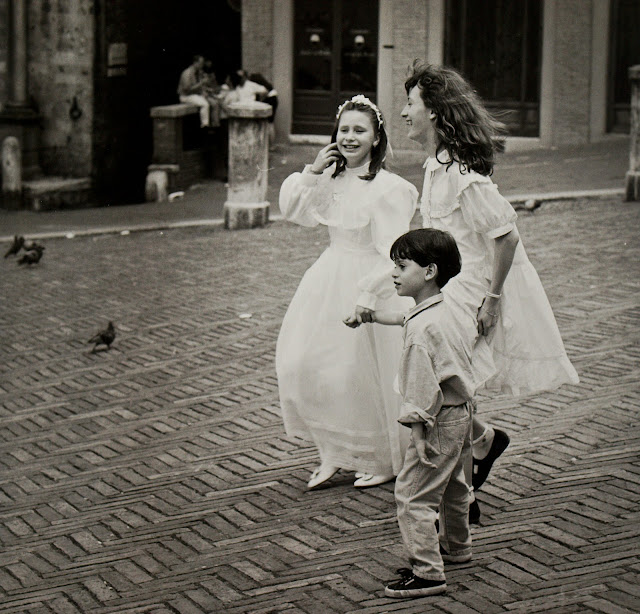 
In the past few days I've used a surprising number of cameras for a surprising number of uses.  I used a medium format camera with a mediumish long lens to shoot an available light portrait that just had to be one slice of sharpness in a sea of smooth tones.  I used a high resolution, full frame camera for an advertising project where the final manifestation of our work will be large posters and print ads.  I used an older full frame camera with a firewire socket to shoot twenty pieces of various kinds of artwork, yesterday.  I like to see the focus and cropping on a tethered screen to make sure I'm not getting small reflections that might go unnoticed on the small rear LCD of a camera.  The firewire connection is fast, mature and reliable.  Not as fast as "live view", just better.

I grabbed a small sensor camera with a built in flash to catch Ben blowing out candles on a chocolate birthday cake from Sweetish Hill Bakery.  The camera was fool proof and quick and I used it on the "P" setting. Last Friday I used a camera with a slightly cropped frame to shoot a cross country race.  It's the same camera I use for swim races.  It focuses faster than even my newest cameras and shoots 8 frames every second.  I'm bound to get something good....

And I used an old view camera because I needed a camera with which I could control both the front and the rear standards.  Plus, I had the nostalgia to see another one of those chubby, juicy transparencies.  I've come to believe that the Apple iPad screen experience was modeled after the look of a four inch by five inch transparency on a light table.  In the short space of a week I've used a collection of cameras not because it's what I had lying around but because, over time, I've selected an assortment of cameras that all do different things well.  Some get out of your way.  Some provide a technique that is unavailable elsewhere.  Some make my jobs easier.  Others make up for my aging reflexes.

Some people are happy finding "just the right camera for themselves."  I'm not sure every professional has that freedom.  We could pretend that we only do our very specific vision but that's not fun and it's not fair and, in pursuing that "one-ist" dogma you'll find that the more generalist market of a second tier city will beat you down with the demand for variety.

None of my cameras needs to be the latest.  My sports camera and my firewire full frame camera both were born in 2005.  They still amaze me.  My newest camera is also my cheapest one.  My favorite camera is my oldest one.  But they each serve a wonderful purpose: to realize my vision efficiently.

I have the same relationship with my lights.  I cannot imagine trying to do all the different things the average photographer is called on to do with only a bag of speedlights or only a Pelican case full of studio lights.  Each choice is rife with compromise.  About two weeks ago I set up and shot 70 people's portraits, from their toes to their heads (some even jumping into the air..) against a white background.

We used four lights on the background for an even wash, two lights in front of our subjects and two sidelights for a total of eight fixtures.  We set up at 8am and shot, altogether, 1,400 shots by the end of the day.  We needed to shoot generously to loosen up and emotionally involve our amateur talent.  We needed modeling lights to see the effect of the lights.  We had twelve light stands because we needed scrims to block light from hitting our subjects in the wrong way, and to keep light out of the lens.

After Amy and I shoved all the equipment back into the studio I hopped in the car and headed off to shoot a small shoot with two speedlights and a few 48 inch diffusion panels.  We needed one good portrait and I needed a fast set up.  The speedlights were my answer.  The next day we spent ten hours shooting video interviews with A/C powered LED panels.  We'll do it again next month and the month after and the month after.  Yesterday I spent the morning shooting ceramic art and two dimensional art.  I used a set of tungsten spot lights.  I used them because I could see exactly what I'd be getting all the time.  I used them because the tight spots keep spill light in the studio to a minimum.  They were exactly the right tool for the job.  Not the latest tool.....these lights are twenty years old.  But definitely the right tools.

And in the afternoon I was setting up a 4x6 foot softbox and one of the monolights because that was the right tool for a portrait I wanted to make.

I play with lots of cameras and lights because I'm curious about what they do and how they do it.   But I really own just the tools I've come to understand I need for the range of things I shoot.  And I don't apologize for having them, they are part of the business.

It's important to understand that I don't own all of the cameras I write about.  When I wrote a review of the Fuji X100 I borrowed a copy from my friend, Will.  When I reviewed three different medium format digital cameras in 2009 and 2010 I was using cameras loaned to me by the manufacturers.  While I appreciate what they can do I wasn't compelled to keep any of them around.  Not right for my business.

I think it's important to trust your tools.  And the only way to do that is to use them and find out what they do well.  You may need more than one device to do paying work.  If you do architecture you're pretty much going to need a shift lens.  You can try to make due but I never works out well and not everything can be replicated in PhotoShop.  If you are going to take commercial/advertising portraits you'll need some studio flashes with enough power to go big.  If you really want to shoot action you'll need a camera with lightning reflexes and tenacious focusing powers.  That's more important than file size.  Every thing is a compromise.

But clients don't like compromise when it comes to their projects.  If you are shooting for you the sky's the limit.  Or the ultimate in minimalism is that limit.  Your choice.  If you shoot for money you need to be open to finding the right camera, not just the latest or coolest camera.

I had an odd thought as I was reading over this blog to find errors (of which there are many, I'm sure).

I found myself wondering what camera different writers might choose if they lived in our time.  What, for instance, would Hemmingway shoot with?  And what about Dylan Thomas?  Would Tolkien shoot with an 8x10 Deardorf?  Would Sylvia Plath favor a Leica?  Don't know why it came to mind.

Program Note:  I'll be doing two demos each day at the Austin Photo Expo.  I'm planning to do portrait sessions with my LED lights.  I'd like to show what I do with them.  I also think it will help to build interest for the upcoming LED book. The Expo and the seminars are free.  If you are in Austin it would be nice to see you there.  Here's some info:  http://austinphotoexpo.com/
Posted by Kirk, Photographer/Writer at 18:25 2 comments: