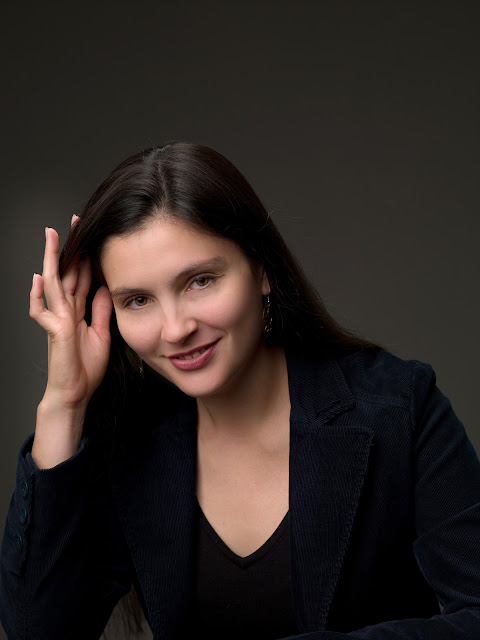 Amy.  Brought to you by Phase One.
I got some interesting mail when after I wrote my last two columns.  Those screeds were essentially essays to myself, telling me to stop wasting time and money and get out and work on the work instead of working on the toys.  One person wrote to tell me that I was a dilettante who just played with cheap cameras and didn't "get" the allure and the technical virtuosity of cameras like the Nikon D3x or any of the other full frame cameras.  I certainly can't argue about being a dilettante;  I'm not nearly as committed to the real craft of photography as I should be.  If I were I'd be rushing into the darkroom to use the last of the real technology before the art of photography dissolves completely into a totally subjective romp through the imaginary Disney Land of digital where anything from a snap made on a phone to still frame from a video camera counts as big art... (that should get us some mail...).
But I did take umbrage from the assertion that I didn't know "shit" about bigger, better cameras than the micro four thirds, "baby" cameras I'm "always going on and on about."  I did have another life before I started this blog and in that particular life (three years ago)  I spent some quality time playing around (all dilettante-style) with three different, at the time, state of the art, medium format digital cameras.  Leaf, Phase One and Mamiya all sent me their cameras and asked me, "pretty please!!!" to use them for a few months and then, maybe, write a review for one of the photo magazines I haphazardly wrote for back then.  The Leaf AFi7 was a bit unwieldy, but workable.  They sent it along with a 180mm f2.8 Schneider lens that made me almost cry when it came time to box up and send it back.  In the days when 12 megapixels was about the max for my then Nikon System the 40 megapixels on the Leaf sensor was a technical revelation.
But the camera I liked playing with the most, and the one I held onto the longest, was the Phase One with the 40+ back and two really fun lenses.  The lens I liked best (naturally) was the 75-150mm zoom. What a treat for a portrait photographer.
I spent many happy days blowing up the files really big.  But when it came right down to it I just couldn't justify the price tags.  Had they come during a different point in our economic timeline I confess that I would have tried to rationalize the Phase One.  It just flat out worked.  Well,  if I'm going to be totally honest, the two different batteries (which died in opposite cycles from each other) drove me a bit crazy but I guess that's a "first world" complaint.
I made big prints.  I looked at every pixel.  I shot the cameras with flash, daylight, tungsten, florescent and even some early LED fixtures.  And I could see a difference.  Not a $45,000 difference but a difference.  But I'm getting off track.  My real point was that I have played with bigger cameras and that, in fact, helps energize my enthusiasm for the smaller cameras.  Being able to do 90%  (with the pixie cameras) of what I was able to do with ultimate cameras is a profound thing.  An amazing thing.  And I appreciate the engineering we can buy these days for so much less money. 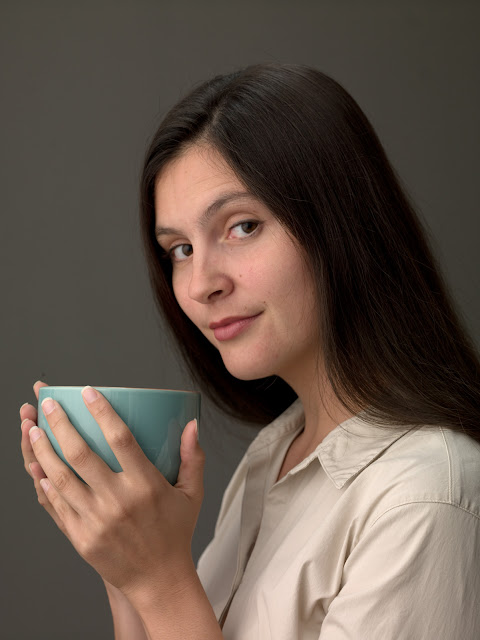 Amy with coffee.  All is right with the Universe.
But this was my "take away" from the year of shooting big:  If I do my technique really well, and I'm not making a print very big, then most people, myself included, really won't see the difference between a $1,000 camera and a $30,000 camera with a $8,000 lens.  Under perfect circumstances?  Printed really large?  Best Technique.  Yes, the big camera files will technically look better every time.  But in real life?  Naw.  Having a camera with a stout battery, menus you know forward and backward and enough pixels to make a nice 12 by 18 inch print is really a very sweet spot on the whole continuum. 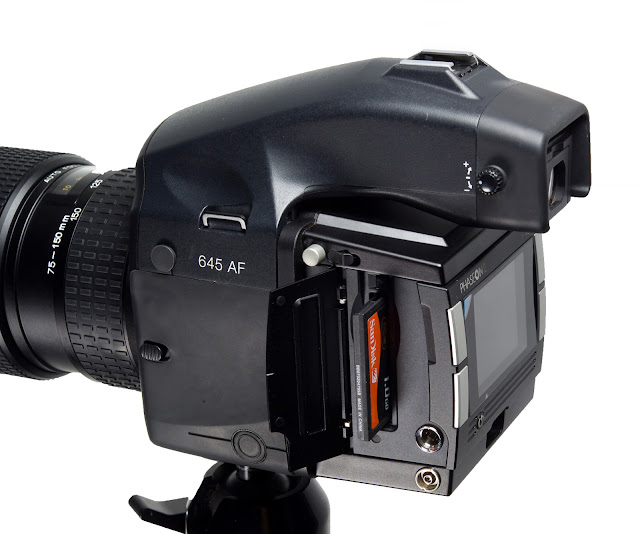 Big bucks.  Little screen.
Would I snap up one of the Phase One systems if it cost less than an old 2003 Honda Element?  I'd probably do that trade.  But it's like every other camera system.  No matter how good it is today someone will come out with a system to trump it in a year.  Learning to use any camera well never gets obsoleted.  People have warned me several different ways:  "Never drive a car that's faster than the one you have."  "Never work on a computer that's faster than one you can afford."
And it's like every other camera system in the world in that, if you have nothing particularly interesting to say, the images don't look particularly interesting.  And while high quality is nice, it's not art. 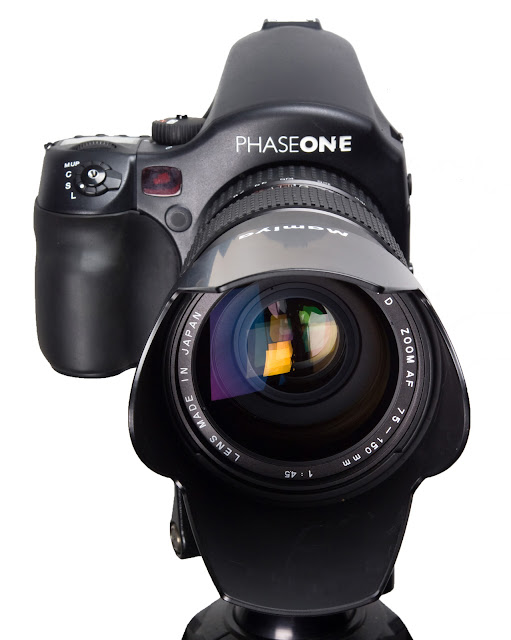 Even those who loudly proclaim to care nothing about gear (sneer implied) stopped to ask me about the bad boy hanging off the front of the Mamiya camera. Tech Chick Magnet (TCM).

Finally,  I was reading through a forum post  in which an insane person wrote about the need for there to be a mirror-less full frame camera from the micro four thirds companies.  Huh?  That's like Tesla cranking out a diesel Hummer.  But the argument was soon joined and, at one point a "professional" photographer stepped in to say that having the full frame was "crucial" in order to maintain "credibility" with clients and stock agencies.  I think that instead of eviscerating his logic I'll just let that whole concept hang in the air...

Hope you're having a great week.  Let us know if you decided to run out and pick up a medium format digital camera system.  The whiskers on a cat will never be sharper.

Posted by Kirk, Photographer/Writer at 16:34 17 comments: 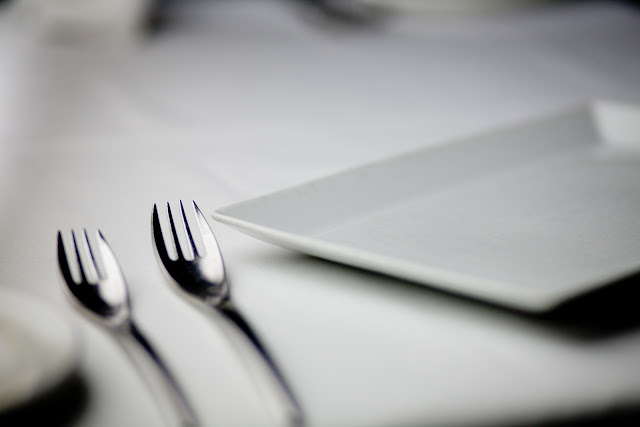 And, how do you do that?

Eat stuff you never tried before.

Make friends with people who are smarter than you.

Make friends with people who are actors, artist and musicians.

Go to museums. Look at the art.

Go to a mosque.  Go to a church or go to a synagog.  Go to a house of worship that's not your current brand.


Learn new stuff from your kids.

Pick a place that's one tank of gas away and go there.

Go on a life threatening adventure.

Spend a month on a cargo ship.  Or a fishing boat.

Take naps in the middle of the day and stay up all night.

Try your hand at abstract painting.

Date your wife.  Or husband.

Change political parties for a while.

Put down your cameras until you really learn how to tell interesting stories.