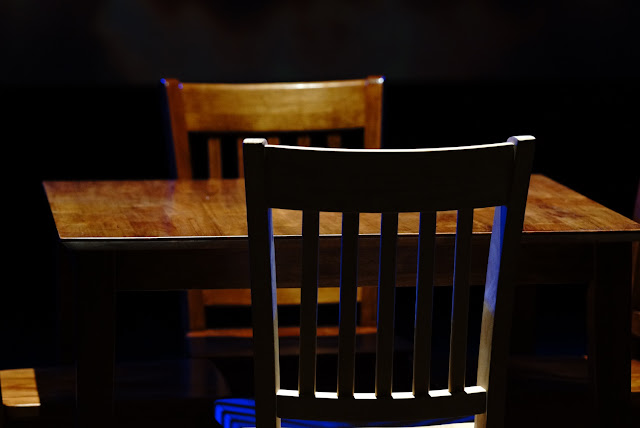 The Laramie Project (parts one and two) is a play about the murder of a gay college student in Laramie, Wyoming.  It's a powerful play about a heartrending event.  Zachary Scott Theater is producing the original play and it's follow up wherein the original writers go back to Laramie ten years later to understand the aftermath and the changes in the town.
It's a tough play to photograph and even tougher to watch.  It's an important piece of theatrical art that speaks to our ideas of tolerance and diversity in America.  These are images from the dress rehearsal of the "Ten Years Later."  (Click on any image to go to the gallery). 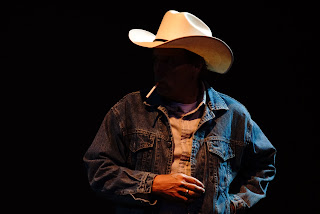 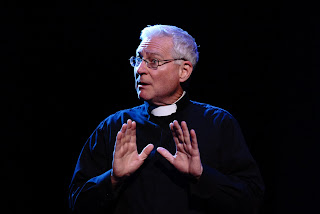 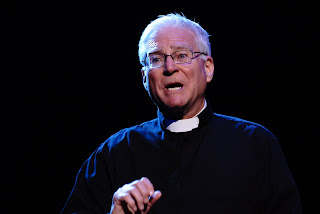 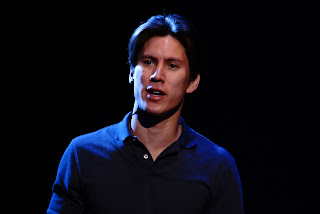 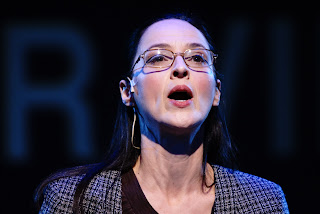 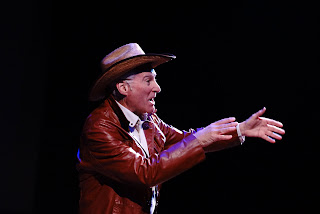 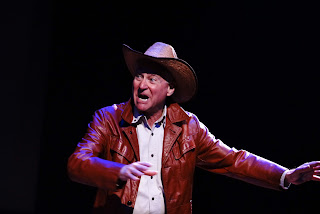 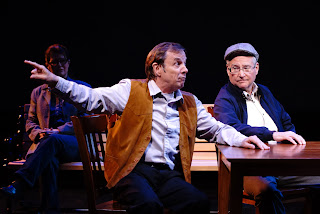 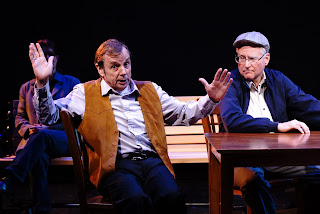 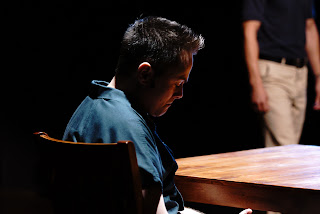 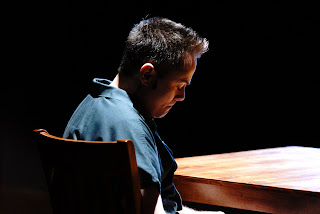 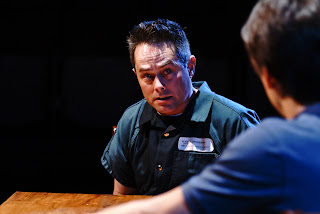 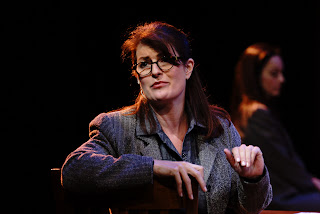 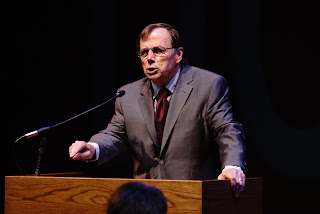 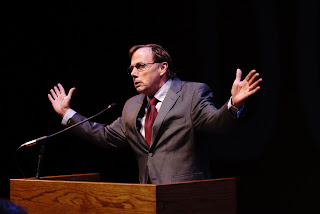 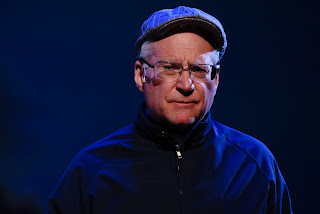 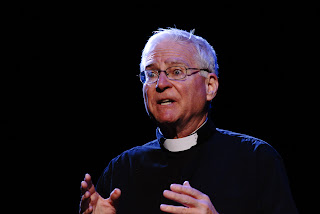 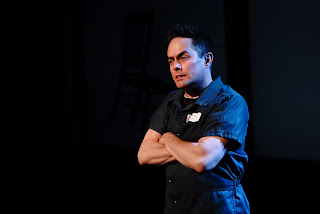 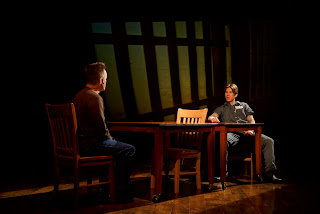 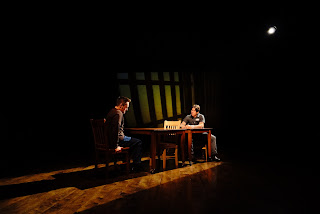 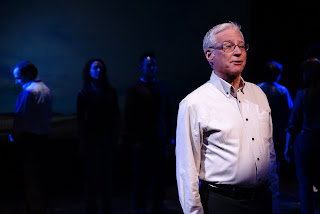 Photographic notes:  I used two Sony a77 cameras to document the dress rehearsal.  As always, I did all of the photo documentation without any supplemental lighting.  I used the 16-50mm 2.8 lens and the 70-200 2.8 G lens; one on each body.  Both bodies were set to 1600 ISO, medium size Jpeg (12 megs) at the extra fine setting.  I stayed close to the fully open apertures on both lenses and varied the shutter speeds to compensate for changing light levels.  I didn't meter but depended on the electronic viewfinder to assess my exposures.
I learned a few technical things after my first attempt to use these cameras to shoot low light theater photography. I'd left the cameras set to DRO auto which tries to expand the dynamic range of each shot.  That works by boosting shadow tones which increases digital noise.  This time I worked with that setting off.  The files are much less noisy.  I also used the medium Jpeg file size instead of the largest size.  This also reduced apparent noise.  The camera locks on focus like a badger and shoots as fast as I could ever want it to.  Being able to see what the image will look like, vis-a-vis exposure and color has changed the way I shoot theater.  I shot over 1200 files and lost very, very few to exposure errors.  It's a very elegant way to shoot.
The play is wonderful.  The Zachary Scott Theatre cast brought a level of feeling and emotion to this performance that defines, for me, the power of live theater.
http://www.kirktuck.com/site/home.html
Posted by Kirk, Photographer/Writer at 21:52 14 comments:

For me, taking a portrait is a process of reduction. 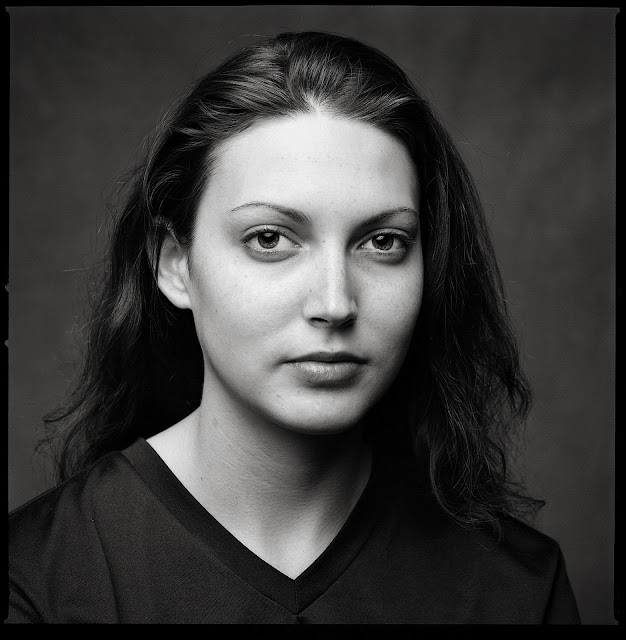 When I make a portrait I don't consciously think about what we're doing.  I ask my subject to sit comfortably in the studio and I try to look seriously at their face when they are not "on camera" so I can see what they really look like, and then I look again to see what they look like to me.

I may have paced back and forth before the person arrived and I may have set up some elaborate lighting constructions, the undertaking of which was no doubt a therapeutic way to keep my hands and my brain busy so I wouldn't have time to contemplate the very real possibility of failure.  Of inviting someone to my studio and then being unable to create an image/portrait/photography during the time spent together that either of us would like.  So I typically spend hours setting up lighting designs and testing them and then modifying them or changing directions altogether.

The first few minutes of a session are the most nervous for me.  I want to get right into the action of taking portraits but I know, intuitively, that I'd better slow down and start patiently so the person on the other side of the camera has a chance to settle in, get comfortable with the space, and make their peace with the camera.  Even though I am, in truth, a terrible introvert I feel the need to engage and entertain.  I don't want people to be bored in my space.  I don't want their boredom to negate our purpose.

If I'm shooting film I talk to the subject about the process.  I tell them that, unlike the endless supply of frames in a digital camera, we'll have to stop after every twelve frames in order to change the film. I tell them that the process will take more time than they might be used to.  I explain that, while in the movies about photographers the photo-protagonist leaps about like a gymnasts and screams out frantic and non-stop directions that keep the models constantly swirling and stumbling from one pose to the next to the beat of incredibly loud house music, our session won't be like that.

I explain that we'll move slowly so I can see what angles and expressions really look good in the camera.  When we find a look I like we'll try to hold in that basic set and make micro adjustments till we get everything just right.

Now, in the days of all digital, all the time, I've compromised a bit and given up shooting Polaroid tests.  It helps my process of rationalization that Polaroid no longer makes test film for my camera and Fuji doesn't make the kind I like.  So I take tests with an random digital camera set to the same ISO as my black and white film.  Once I've shot digital tests from a bunch of different angles and looked at the images on some sort of screen I am ready to proceed.

I can't rationalize shooting film in 35mm anymore.  It's different than digital but it's not what I learned on and it's not how I cut my teeth in portraits.  I shoot with a square, medium format camera.  Usually a Hasselblad 501 CM.  I nearly always use the 150mm Planar lens.  I like the 180 as well.  So my camera is on a tripod and the lens is well shaded from flare and other glancing light.  Kind of important since I'm standing right at the edge of my giant soft light.  I'm so close I bump my head into the side of the soft box, or the edge of the frame, a lot during the shoots.

On a small table next to my tripod is a stack of loaded film backs.  As I shoot I'll reach down and grab a new back from the table when I hit the end of a roll.  The used back goes on the table, but upside down.  That's my cue that the film in the back has been used up.  I have six 120 backs so every 72 frames we take a little break and I download the spent film and put it into an envelope.  Then I load all six backs with fresh film, put them back on the little table and we start again.

When we first start the shoot I think I'll want a fill light and a back light but as soon as I start looking at test shots these extra lighting instruments go away.  There's generally one light on the background and one light in a really big softbox or octabank.  These stay but the big light might get pulled in closer or raised, if the spirit moves me.

I know we're on the right track when the subject and I both feel a kind of electric excitement because we've discovered an angle, an expression and a gesture that feels so right.  I know we're done and getting stale when we start suggesting conventional poses.  These days I'm rarely looking for a portrait with a smile, unless it's genuine and unscripted.  I calm and quiet face is my secret for getting beautiful eyes.  A calm and quiet session is my secret for being able to reduce the noise, reduce distractions and reduce movement until we have a stasis and a balance that feels right.  Almost like a guided meditation.

And at some point, like an arrow shot into the air, we hit a high spot where we both know that we're "on" and that we're getting beautiful images, and then, like the arrow it all falls back to the earth.  We both know we're done.  And we thank each other profusely for the part each of us played and we promise each other we'll do it again soon.  And I hope we will.  Because almost everyone I shoot is so beautiful.