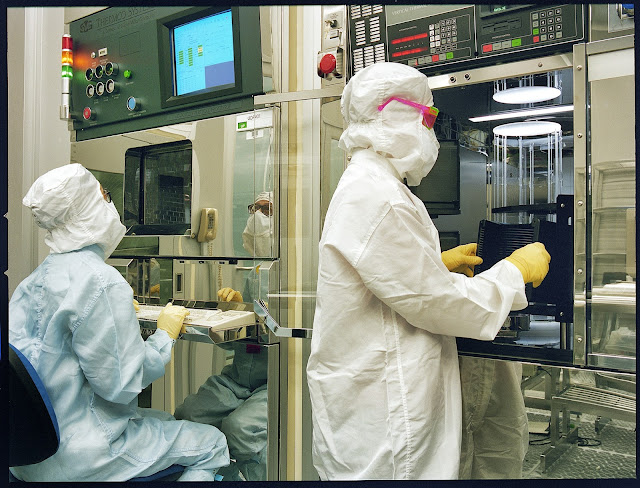 Lost to the vagaries of the web and a lower res scan from the original neg are the amazing amounts of detail and sharpness in the originals...

I love looking back in the archives and thinking about how we used to work in the days before digital imaging. This is a job for Motorola that dates back to 1996. They had just opened their MOS 13 facility with a large percentage dedicated to clean rooms that were instrumental in fabricating .25 micron geometry microprocessors and microcontrollers. Every industry magazine and our chamber of commerce wanted to be able to take tours into the fab but the company soon realized that having so many people coming through would be a productivity black hole.  Not to mention that keeping out contaminants would be more difficult with clean room newbies.

The marketing team and the engineers in charge of production hired my company to create a photographic tour  of the facility that would show the 12 major steps they take to create chips on a wafer.  We had some challenges.  The first one being that all the images needed to be of high enough quality to be enlarged up to five feet by six and one half feet. The images would be encased in acrylic and hung up in a giant entry hall so people would be able to stick their noses right up to the image. The images needed to be sharp, saturated, grainless and of very high quality. Our next challenge was that we would not be able to bring in any sort of lighting equipment. None. I called a friend at Kodak and we discussed all the parameters and came up with a solution. Because the lighting was very mixed we would shoot on color negative film.  That would allow me and the lab to do lots of fine tuning for color, after the fact.

Since we needed high sharpness and low grain we settled on using Ektar 25 (ISO 25) color negative film. I wanted to shoot 4x5 sheet film but the contamination officer (rightly) wouldn't hear of it because the bellows folds would be incredible dust magnets and the felt traps across the tops of the sheet film holders were also rated as high dust perils.  Seems one small bit of airborne dust could really mess up the process.

We ended up using several Hasselblad bodies with 6x4.5 film backs. The film backs were 220 (we were well equipped in those days...) and held enough film for 32 images in each. The cropped backs helped me visualize the final aspect ratio of the prints while shooting.  We used two bodies because we didn't want to change lenses in the clean room.  Each body had one of my favorite production lenses on it.  One was a 100mm Planar 3.5 (slight telephoto with no geometric distortion) and the other was a new 50mm Distagon f4 FLE (floating lens element) which gave me a nice, but not intrusive, wide angle view.

We loaded a back for each camera and then took out the dark slides and sealed the dark slide slot with approved tape before swabbing down the cameras with an alcohol solution in a semi-clean room. Then we ran everything through the high air pressure entries areas and brought them, along with a metal tripod (also scrubbed) into the clean room.

The Ektar 25 had a very good long exposure characteristic that didn't really show reciprocity until you went over a 1 second exposure. We used the camera on the tripod throughout and always used the mirror lock-up control on the camera to eliminate camera shake.  I shot sparingly because reloading the backs required me to exit the clean room and start the process all over again.

I spent a long day in a bunny suit with rubber gloves and safety goggles on. In the end we produced 12 enormous prints which still hang in the facility (at least they were there last time I visited).  If I were doing the same project today I'd probably use a medium format digital camera with a high quality zoom lens.

I worked with a lab in Dallas called BWC. The did the printing and the acrylic process and they did a great job. Fun to do a job whose results are still in use over a decade later. And fun to remember the role of slow, sharp film and precision mechanical cameras.

Posted by Kirk, Photographer/Writer at 10:12 11 comments: