Why I think the Sony a99 is the best camera around for documenting live theatrical performances. 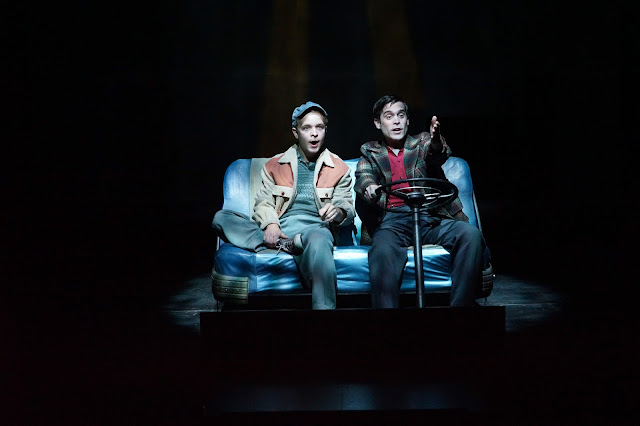 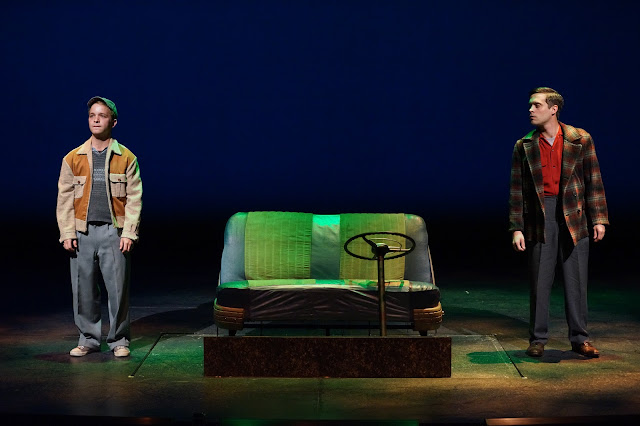 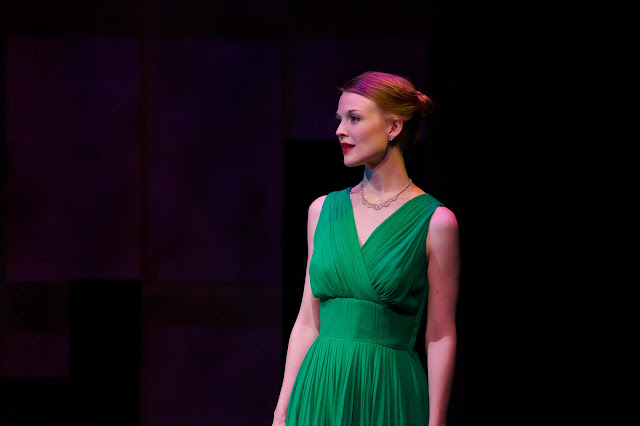 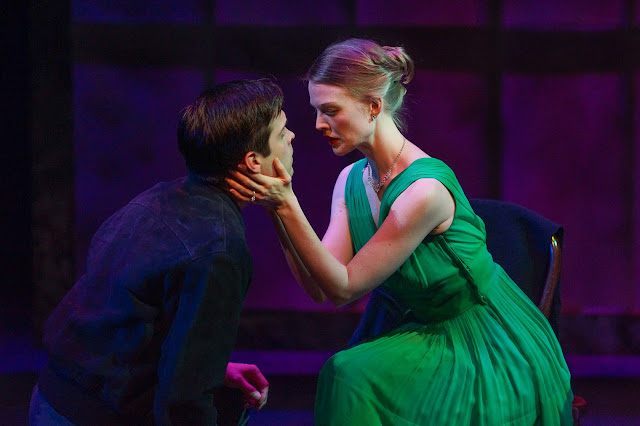 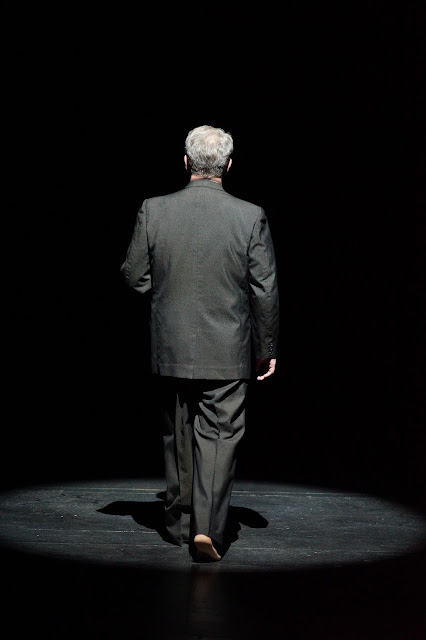 All images above are from last night's dress rehearsal of Mad Hip Beat and Gone, from director, Steven Dietz, at Zach Theatre. All shot with the Sony a99 and the 70-200mm 2.8G lens.

The play started at 8pm and I expected to get to the theatre at 7pm to get my bearings (It's only four miles away from the studio) but real life got in the way. We had a very rare and dramatic meteorological event here in central Texas...it rained. And sometimes when it rains here in Austin the clouds get all urgent and overwrought and try to rain down everything at once. And that's when the fun begins. It was almost Biblical for an hour or so in the late afternoon. Thunder, lightning and seventy mile per hour winds whipped fat rain drops and sharp, spitty chunks of hail at us with no mercy.

My dog cowered in Ben's room, hiding under the covers on his bed and trembling with every thunder boom. Ben, unfazed, continued to study his calculus. I had my hands full in the studio as water started to seep in on one side. The side with the French drain. A French drain that was clearly overwhelmed.

I meant to pack up and get out earlier by there I was with a bucket and a mop wondering if I was bailing out a life boat with a thimble. But as soon as the rain slowed down the seepage stopped and the rest was just a matter of mopping up.  I hopped into the studio's racing Honda CRV and thought it would be the usual quick jaunt to the theatre until I hit the first of several blocked roads. The water had come up so quickly that the main arterial from my house was closed by local law enforcement. Drat. I headed for the secret back roads but in the day of GPS and Garmin there are no longer secret back roads and so I inched toward my destination with thousands of other frustrated drivers.

I got to the theater and blocked off five seats in the orchestra section, dead center. The crowd settle and the play started. I was there to shoot so I had my usual, ever changing collection of cameras in lap and spread over the chair next to me. Two Sony Nex-7's and a Sony a99 with a 70-200mm G Sony lens. Last night the a99 got the most use with 1198 images coming from that combination. It was glorious.

Theater photography is where the EVF (electronic viewfinder) comes into its own. Since there is no single "correct" white balance you get to chose and what better way to keep a handle on the ever changing color of light on the stage but to monitor it in real time, with your correction overlaid and presented to you as a fait accompli in the high res view finder. You get to see, at a glance, exactly how the exposure and color balance you've set will render in your final image. The only way to get that with lesser, OVF camera is to take a "chimp frame" then make some corrections and then chimp again. And again. Eventually you'll get everything into the ball park and will be able to shoot in earnest but by then, chances are, everything will have changed and the play will have moved on to its next collage of colors and light settings and tone.

It sounds like a simple thing, right? But it's anything but. When I look through the viewfinder of an OVF camera I see what my eye sees. And my eye works with my brain to neutralize everything I look at. It makes magenta skin look normal and it makes green skin look normal. I can't see the range of colors that diverge from normal because the eye is only a good comparator, not a good stand alone color checker.  And when I look through an OVF the scene always looks perfectly exposed to me. The only two ways I can tell that it's not perfectly exposed for the camera's use is by either stopping to review images on the back screen or by watching the meter. But the stage is all about pools of terrific colored light and inky black shadows. Exactly what are we metering?

That's why I love the EVF on the a99. At a glance I can tell whether a scene is over exposed for the main subjet that I want to render.  The EVF shows me what colors I'm getting instead of me having to stop, push the review button and evaluate. And if the exposure or color does need changing I can watch those changes in real time as I push a button or turn a knob. I never need to stop and start and iteratively test each parameter. It's like looking at a Polaroid versus a video feed. The feed can be live/now/immediate. The review is past/moving target/gone.

If I enable DRO (Sony's in camera dynamic range expander) I can see the effect of DRO in the review of every shot that comes up automatically in the EVF. That means I don't have to remove the camera from my eye to evaluated a "proof." If I like what I see I tap the shutter button and the camera is ready to take the next shot.

Last night I hit the focus hold button in order to lock focus on a subject. When the camera went into MF mode the focus peaking feature automatically kicked in and the red (color I chose) surrounded the subjects that were in good focus. If a subject moved out of red zone I knew it was time to refocus.

An EVF means not having to upset the people behind you that are trying to watch the show. There are plenty of times we need to make control changes on the menu. With a non-EVF camera that means bringing on the 3 inch screen on the back of the camera and that means intruding into the darkspace of the show. The people around you now have an extra, peripheral stimulant to distract them from the action on the stage. Not so with an EVF. Hit the menu button with the camera held up to your eye and you can change menu settings or review images without spilling light out of the camera and creating visual stink for your seat neighbors. Truly a camera implementation with manners...

The same viewfinder qualities that make the Sony a superb theater camera also apply for all other EVF enabled cameras, such as the Olympus OMD EM-5, the Panasonic GH3 and even my little Canon SX40 IS.

But what makes the Sony perfect for me is the wonderful sensor inside the camera. It shoot well at higher ISOs, just like the Canon and the Nikon's do but it has one more trick up the sleeve that neither of the more primitive, traditional, conservative cameras have: It can do image stabilization with every lens you stick on the front of the machine because the IS is on the imaging chip.

Now my Rokinon 85mm 1.5 and my Rokinon 35mm 1.5 are both image stabilized and with focus peaking and in-finder focus magnification it makes the totally system the most accurate and fastest to use system for taking advantage of a giant selection of manual focus lenses. Pretty amazing.

Great Sensor, Much more useful and flexible finder, IS with all lenses, Great handling.  I'm trying to think of any downside to the big Sony flagship in regards to shooting live theater on the stage and I can only think of one thing that gets trotted out with regularity: Battery Life.

The big hit on the Sony is the idea that you'll only get about 400 exposures on a freshly charged battery. All depends on how you use the camera. Last night I shot 1198 images on one battery with 32% charge remaining at the end. Not so bad. Certainly good enough for me. But just in case I do keep an extra in my pocket...

Posted by Kirk, Photographer/Writer at 15:40 14 comments:

A very interesting mix of Live Theater, Still Photography and Video. How big is big? 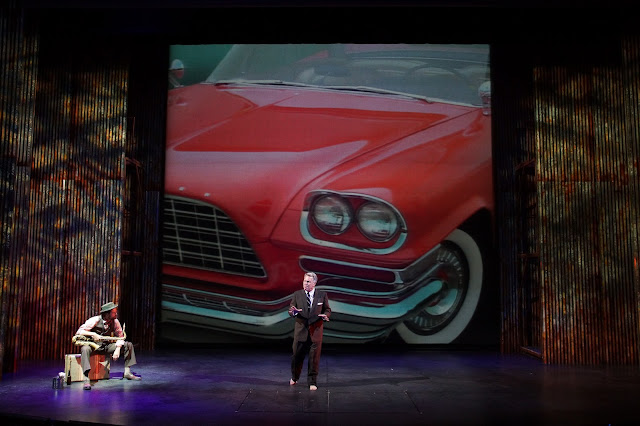 Everything changes all the time. When I first started photographing for Zachary Scott Theater we used medium format cameras and black and white film. The reason? None of the local newspapers, magazines or tabloids ran stuff in color. Color film was slow and grainy and hard to use under mixed stage lights. But with quick reflexes and some darkroom work the medium format Tri-X film could produce nice prints for the media. Last night some of dress rehearsal documentation was done with two pint sized Sony Nex 7 cameras.

While the theater has used projectors for quite some time the show, Mad Beat Hip and Gone, is the first production we've done that uses screens of this size (over 30 by 30 feet) and so ubiquitously integrates video and still photographic imagery into the DNA of the play.  The image above shows the size of the screen in relation to the actors very well. 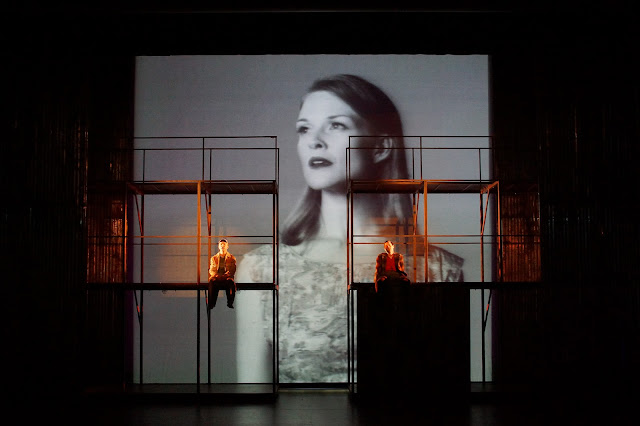 This image incorporates video on the background screen.
Apparent sharpness in motion comes from persistence of vision.
Since we've "frozen" a video frame it appears
less sharp that it  appears in the continuity of the video....

The incorporation of moving video, some in slow motion, as well as still images post processed to mimic the look of the time (1950's), added so much visual depth to an already well written play.

We shot the still images and the video inserts with a Sony a99 Digital camera and a Sony 70-200mm 2.8G lens. The black and white effect was done, in camera, during the initial capture (no turning back!) and the lighting for the stills and videos was done with LED panels modified with a large, one stop silk over the main light.

As more directors take advantage of new technologies (getting the images this large with a short distance behind the screen required that we use two projectors and stitch the images across both machines...) we'll definitely see more and more uses of creative stills and video to add layers of complexity, meaning, texture and nuance to performances. It's becoming a hybrid world for us out there. We might as well just call ourselves, "Creative Content Providers."

Posted by Kirk, Photographer/Writer at 13:51 7 comments: