My friend, Noellia, dropped by for a visit. We broke out some lights and make a few portraits... 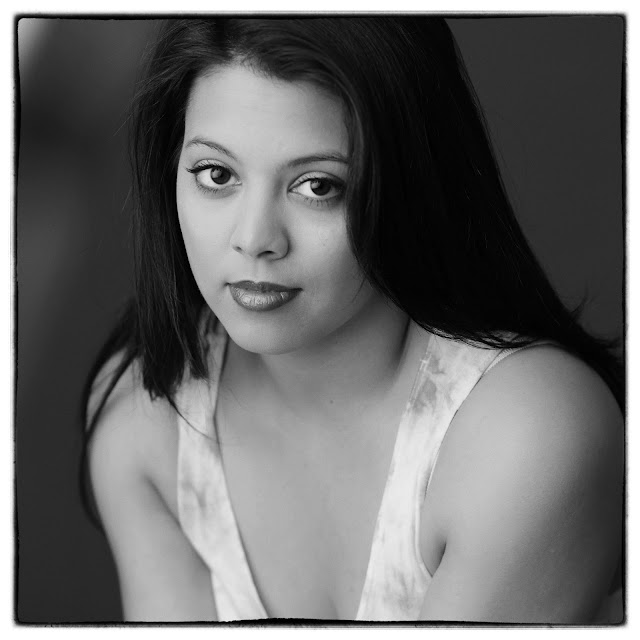 Noellia dropped by just in the nick of time. I'd promised to write a tutorial piece on lighting for a website and I wanted a beautiful person to sit on the posing stool and get photographed so I could have interesting stuff for the article.

Noellia is very patient, she's 26 and I think I've known her since she was eighteen. She never seems to mind when I fumble with a new camera or try out some silly new lighting technique.

Today I was using four fluorescent fixtures behind one of my 6 by 6 foot scrims to do nice soft lighting. I was shooting with the ever present Samsung camera and, embarrassingly enough, I was playing around with the touch focus and touch shutter on the touch screen. I think it actually works but I'd only want to do that technique as long as my camera was anchored to my tripod. If I was holding the camera with one hand and poking with the other I'm afraid I'd drop the whole rig.

I shot the image above with the 85mm lens at something like f2.8. I kept poking N's eyes on the screen to make sure I was hitting focus there. I think I got it at least 50% correct.

I have accidentally found another use for wi-fi. I pulled the microSD card out of the camera slot before I unmounted the card icon. To be honest I don't think I even remembered to power down the camera. At any rate the card wasn't readable in a card reader or in the SD slot on my computer but the camera was able to automatically upload the 800+ files we took to my DropBox folder.  Nice save.

Of course that means the camera is sitting on the edge of my desk endlessly uploading while my Dropbox account is endlessly syncing with my desktop application. The endless joy of technology.

Posted by Kirk, Photographer/Writer at 17:44 4 comments: