A New Camera Showed Up On My Doorstep Friday. It's the Samsung NX30. I Took It To SXSW. 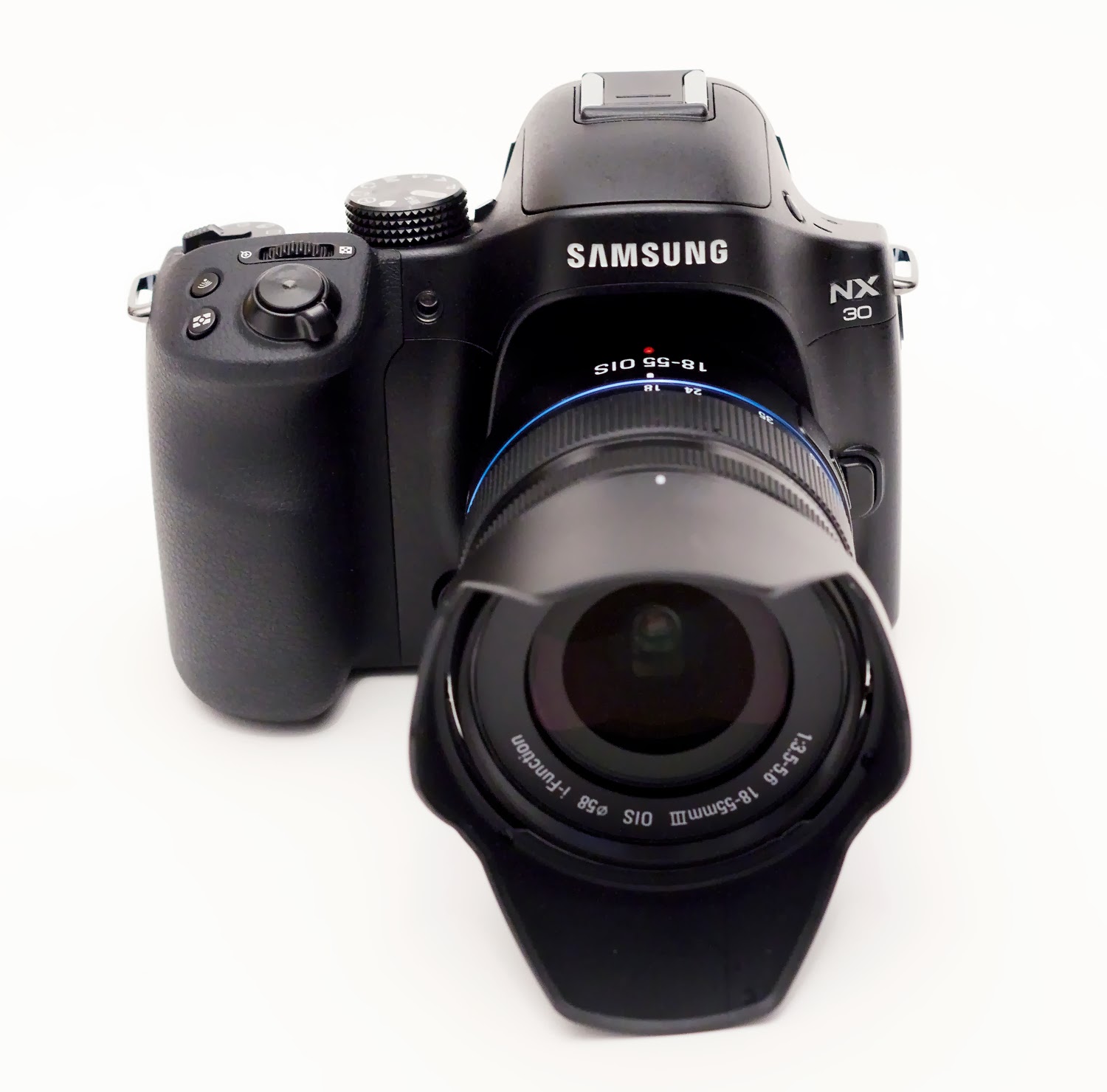 What is it? It's a Samsung NX30. A 20 megapixel, APS-C, Mirror Free
Interchangeable lens camera. It arrived on Friday in the Fed Ex
shipment and I've agreed to shoot with it for a while and post a few images on a regular basis.
No other strings attached. 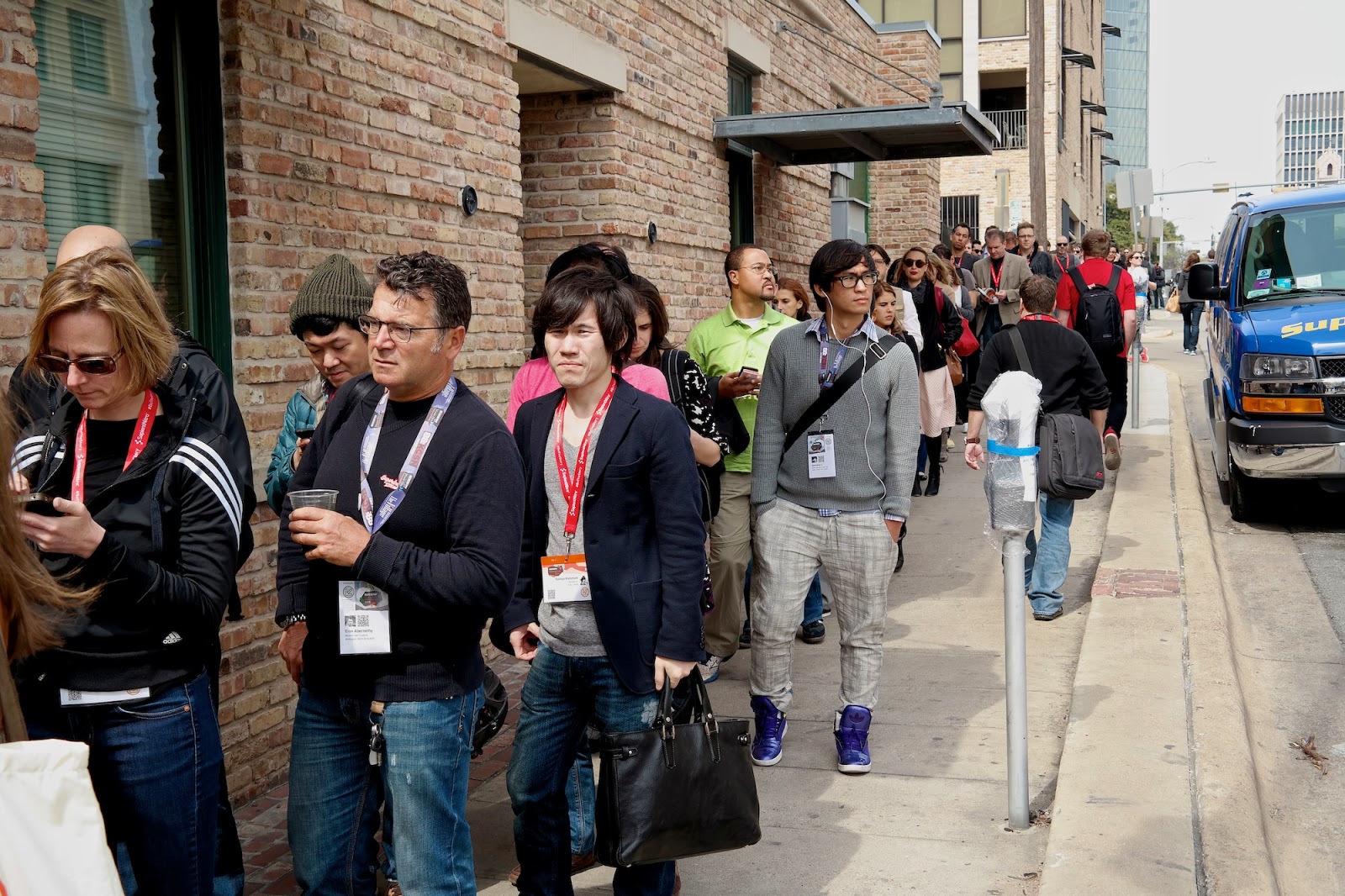 When I experimented with Samsung's experimental Galaxy NX camera last year I was very happy with the sensor but less so with the paucity of physical control interfaces (buttons and knobs). I also felt that the inclusion of the Android operating system and all of the software and connectivity bells and whistles interfered with the pure photography aspect of the camera. My final criticism was about the low res and not very color accurate EVF. When I sent the camera back to Samsung I also included my notes about what I wanted to see in a future gen camera. In almost every respect that camera is the new NX 30 camera. Samsung's P.R. agency sent me one and a kit lens to use with it last Friday. Here's a report of my first 24 hours with the camera:

The box was small. The camera is small. About the size of a Panasonic G6 but with a rounder design aesthetic. The camera body itself is smoother and more rounded. The camera is a mirror less, APS-C sensor camera that uses the entire range of Samsung NX series lenses and has both a "twisty/bendy" rear LCD screen as well as a nicely done EVF. The EVF is a much higher resolution than the previous Samsung cameras and it's nice to look at. It could use a bit faster refresh rate for fast moving objects but it's a big improvement and it's at least competitive with the majority of EVF finders in it's class. The EVF does have one magic trick. You can pull the finder eyepiece out away from the camera body and angle it up to 90 degrees. Nice for low angle shots and an advantage for studio table top work.

Like most of the new cameras I've come across lately it doesn't come with a conventional charger, the camera comes with a USB charger and cable that restricts you to charging in camera. Since I currently have only one battery I don't really mind... yet. From my point of view there's a lot to like about this camera. It's got a nice 20 megapixel sensor that seems to perform well. I shot stuff from ISO 100 to ISO 3200 yesterday and noise was not problematic. On a few frames I thought the noise reduction was a bit heavy handed but that's probably what I get for not shooting raw and not paying attention to the noise reduction settings in the menu. I've now opted for "off" because I love to go to extremes. I'll get it fine tuned as I continue to use the camera.

The exterior control buttons give me quick access to most of the operations I want to use and pushing the FN button gets me a few more. Once the camera is set up you'll rarely have to dive into the menus but if you do you'll find them logical and well structured. The camera has all kinds of connectivity niceties but as you might guess I've turned off as many of these as I could find. There's still a little drain to the battery but I'll try to hunt that down and squash it as well. For me a camera should be ALL about taking the image. Anything that interferes with that, even if it's just a quicker battery drain, is to be avoided.

I know that many of you feel uncomfortable if you can't upload your images immediately but until everyone gets the shooting experience of the cameras just right that fast access capability is just a distraction. Agree or disagree. But I'm speaking from my own experience.

So, on the camera you have buttons for a quick menu call up (FN--which is programmable), WB, AF, Drive Modes, Display, Metering pattern, a big exposure Mode dial and two control dials. There's also the EV compensation button and an AEL button. If you need more controls you can enable the touch screen and customize the quick menu on the rear screen. Also, some of these controls are available by pushing the fn button on many of the Samsung lenses. The settings come up on a dial and I actually like the representation and the sound effects that go with them. This is the first camera on which I have not totally disabled sound effects. Almost forgot, there is also a movie start button on the top panel of the camera. All of these physical controls are a good thing because I don't care how good a touch screen might be there are situations like cold, dry weather that interfere with the touch interface and nothing is more frustrating to me than a camera that can't be controlled at will. My will.

I'll confess that I didn't read the owner's manual. I felt like my experiences with the Samsung Galaxy NX would put me in the control ballpark for this camera and, so far, I have not been wrong. I charged the battery while I worked on a proposal and when the green light came on I packed up my stuff and headed out. We're in SXSW (South by Southwest Interactive, Film and Music Festivals) for two weeks. 50,000+ people from around the world descend on our town for this and the parking goes from tight to non-existent to $100 a day. I walked a half mile to our neighborhood bus stop and rode the bus to the epicenter of the excitement. It cost a buck. Chalk one up for mass transportation!

The bus ride also gave me time to go through every menu on the camera and personalize it to my shooting requirements/proclivities. S-AF, Single point AF, Auto-ISO, diopter fine tuned, Jpeg Super/turbo fine, matrix metering, etc. By the time I hit Congress Ave. I felt like I'd used the camera for weeks. Easy and straight forward.

I walked around downtown and shot a couple hundred snap shots. I was looking for things like: How fast the focus locked in (very fast! Snapped in is more like it...must be the PD on chip), How quickly the camera shifted from LCD to EVF (quick indoors and slower in full sun. When I shoot in full sun now I just go into the menu and choose EVF all the time. Works great.

The camera is a great size for my average hands. It's also a good size for my wife's smaller hands.

When I started my journey to the great intellectual marketplace being held downtown there was a weak but present sunlight punching through wimpy patches of clouds but as the afternoon wore the clouds moved in and everything was over cast. I took a very small leather backpack along with me for the usual collection of modern clutter. My cellphone. A pair of reading glasses. A back up camera in the form of the Panasonic G6 (in case the sole battery for the Samsung raced to zero) and two extra batteries for it. I also dropped in my Kindle Fire so I could read Anthony Artis' book, Shut Up and Shoot. (A good but slightly dated resources for videographers who do documentaries, interviews, etc.).

At first I was a bit put off by the camera for two reasons, both associated with viewing. The EVF is about a stop hotter than the LCD in its rendering of scenes. The LCD and the histograms agrees and my computer agrees with them too. But while there is a control to change the brightness and color of the LCD I haven't found the same control for the EVF. The second point was that in bright, exterior lighting the sensor that decides when to switch between the EVF and LCD seems to see too much ambient light and is loathe to switch to the EVF unless you crush your eye socket right into the eyepiece. Well, I don't much use LCDs in bright ambient light so I found the menu item that would allow me to select my viewer manually and I set it to always be the EVF. That will come in handy when shooting theater as well. Then I set up the menu display to always show the live histogram and I was making a subconscious accommodation for the bright finder within the hour. Done.

The rear screen is just like every other rear screen on cameras that I use. It's bright, sharp and detailed as long as you are in the studio controlling the light. If I'm are standing around in the sun shine I can't see a damn thing on the screens. And if I'm wearing something reflective like a white t-shirt I can see even less... This is why for the last few years I've railed about the need for all cameras to have some sort of eye level viewing mechanism. Even if it's the contrived, giant loupe I have for my Pentax K-01 Super Cameras. The screen on the NX 30 is no different. A pleasure in the studio or in a restaurant or bar but a freakin' nightmare in high EV settings with lots of photons bouncing around. Thank you very much, Samsung, for the EVF.

All in all my initial reaction to this camera is different from my reaction to the Samsung Galaxy NX. That camera refused to work for me, out of the box, until I logged on  and registered it online. The new camera comes with the connectivity in the "off" mode. And in no way does the mania for wi-fi or NFC effect my ability to snap the shutter in a timely fashion.

I've used two lenses on the camera so far; both with very good results. The first is the kit lens (18-55mm) which I originally got when Samsung sent me an NX300. It's a good kit lens and it has a control button on the side that you can push and the camera ratchets through four frequently used controls, including my favorites, EV and WB. The lens seems sharp enough and the range is nice. But the one I really like a lot is the 30mm f2. It has neither the I.S. nor the function button on it but it's small, light and quite sharp.

I was nervous about battery life so I found myself turning the camera on and off again much more so than I do when I use a camera which I have a pocketful of batteries for. But during the course of my shooting the battery indication never dropped below 70% and the battery does seem to charge pretty quickly.

I think Samsung has made a good competitor for the rest of the mirror less systems on the market. While it's not as polished as the Olympus OMD EM-1 the bigger sensor offers some advantages. Will I switch everything, drink the KoolAide and shoot everything with the Samsung? I think you know me better than that. I would get bored to tears just shooting one model or brand of camera. But I will stick a strap on this one and squire it around for a while to see just what I can get out of it.

Below are some images I shot at SXSW yesterday. Nothing spectacular but I was looking for technical stuff on this go around... 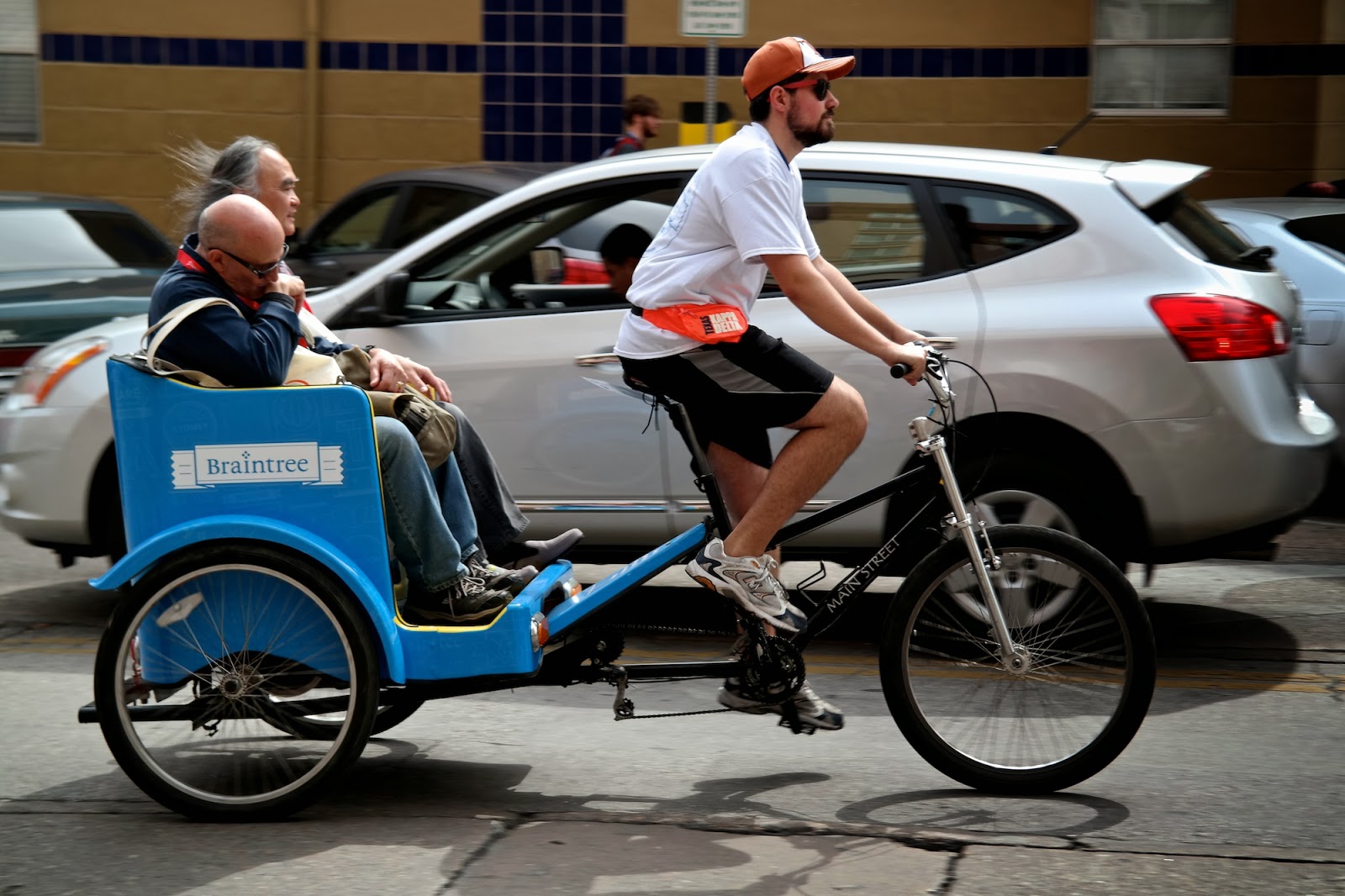 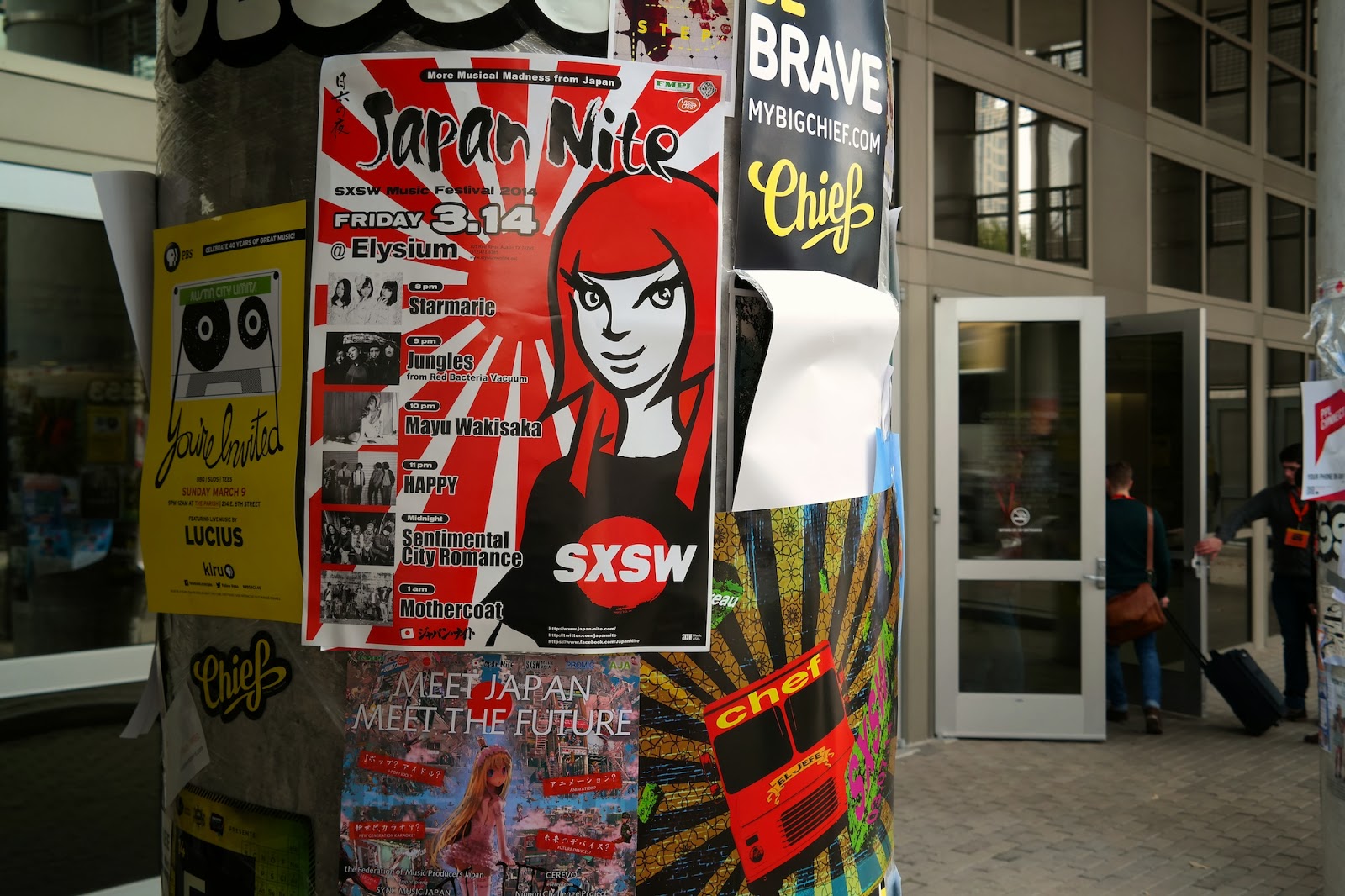 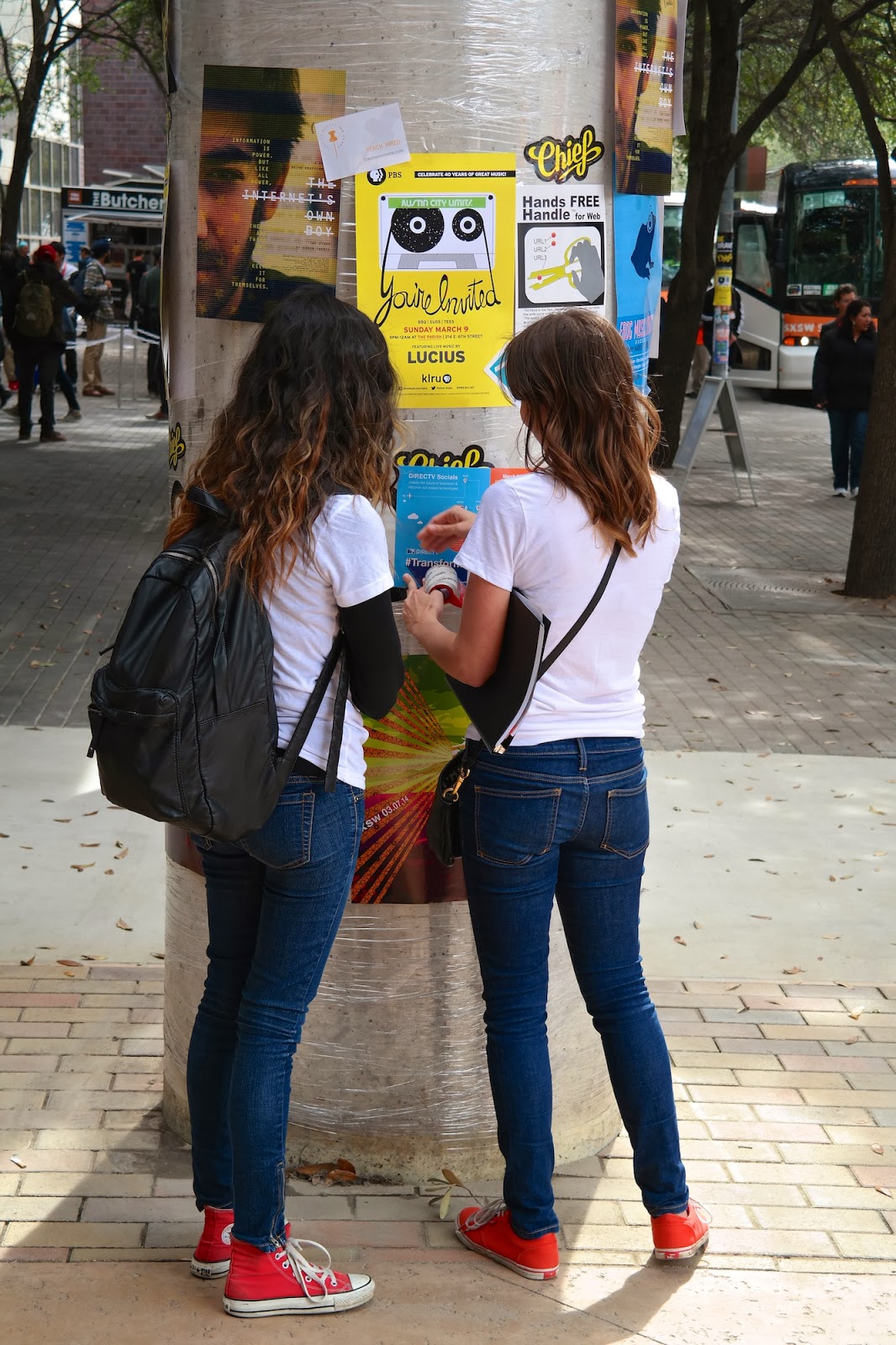 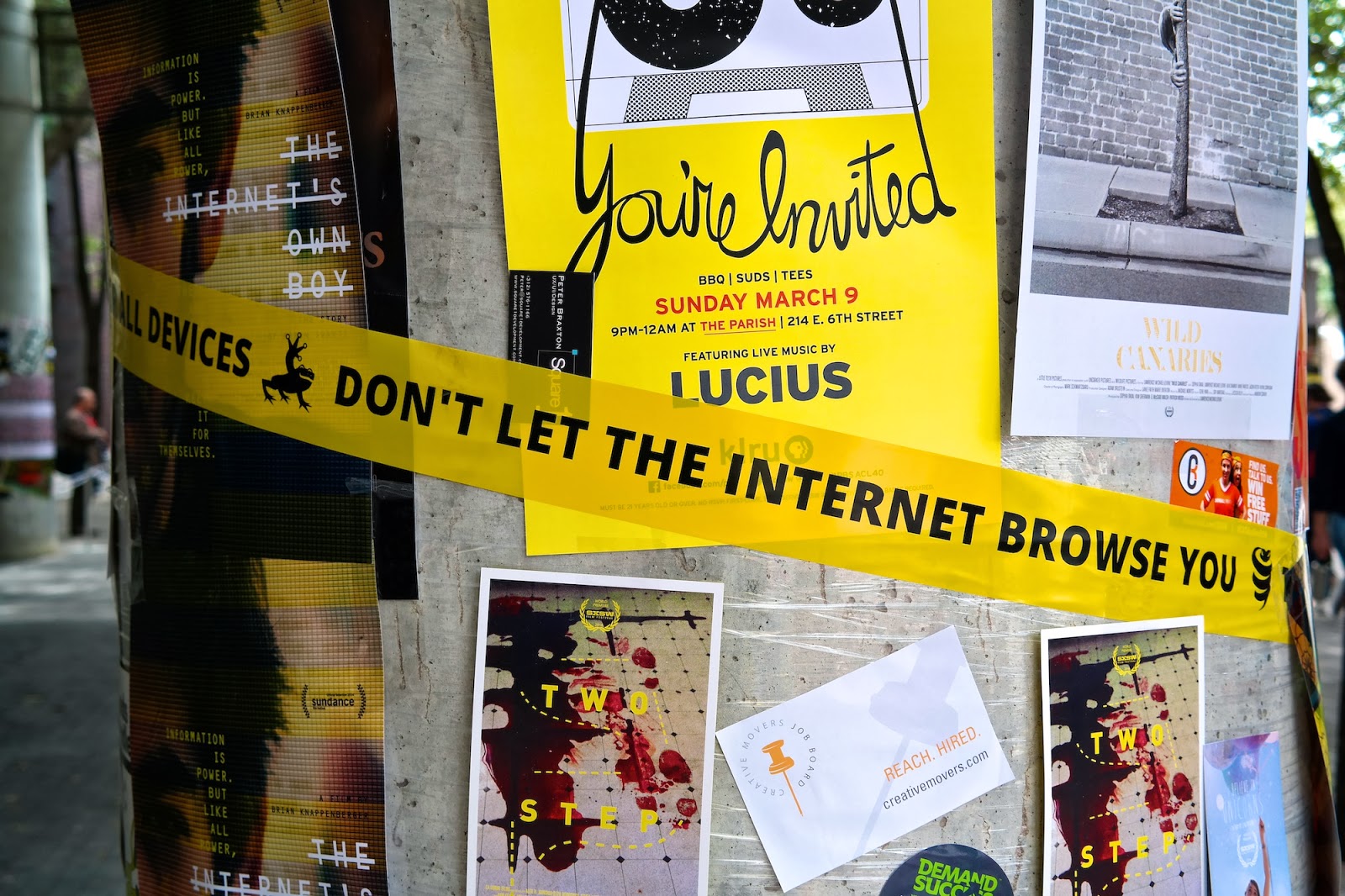 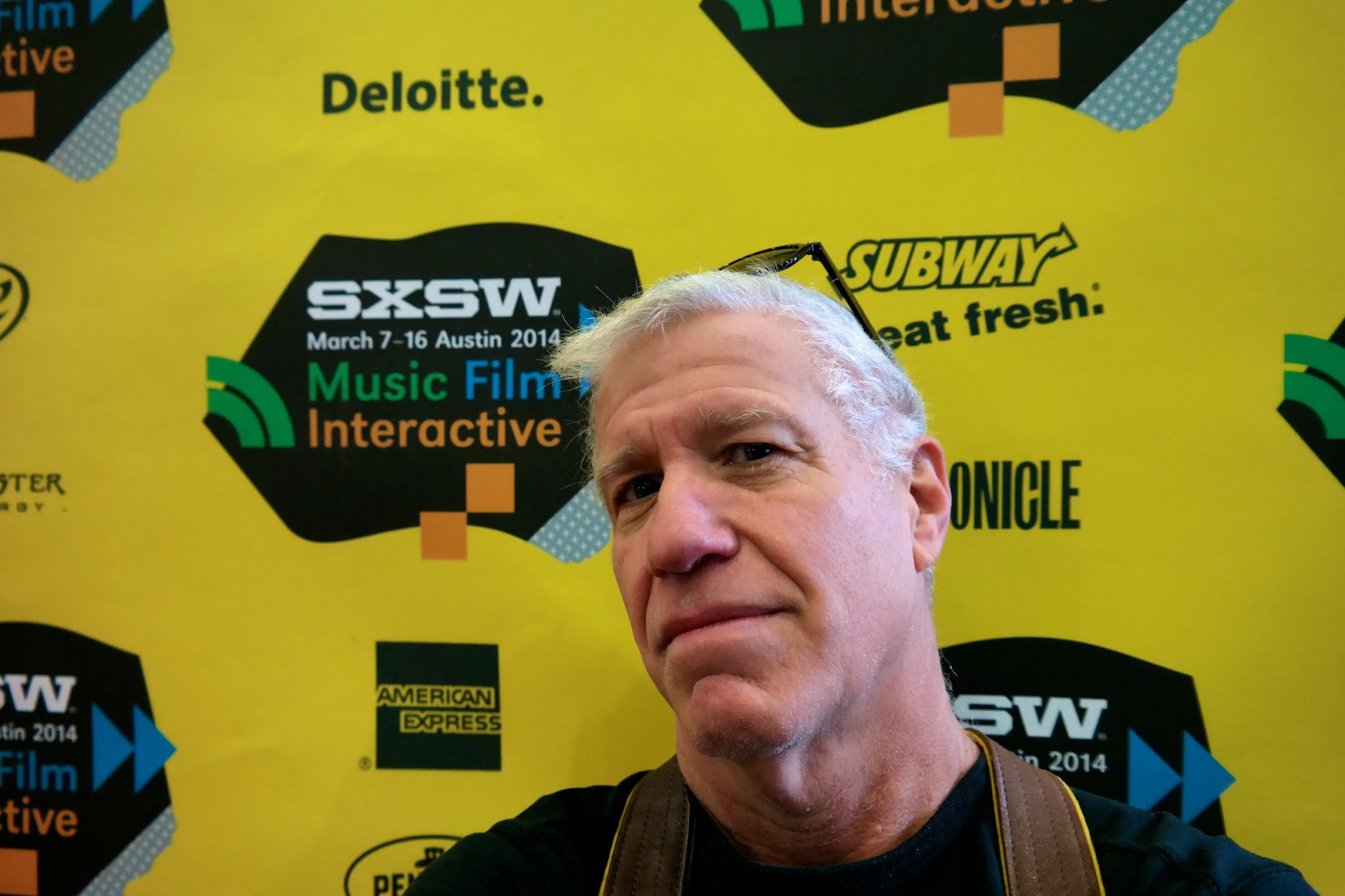 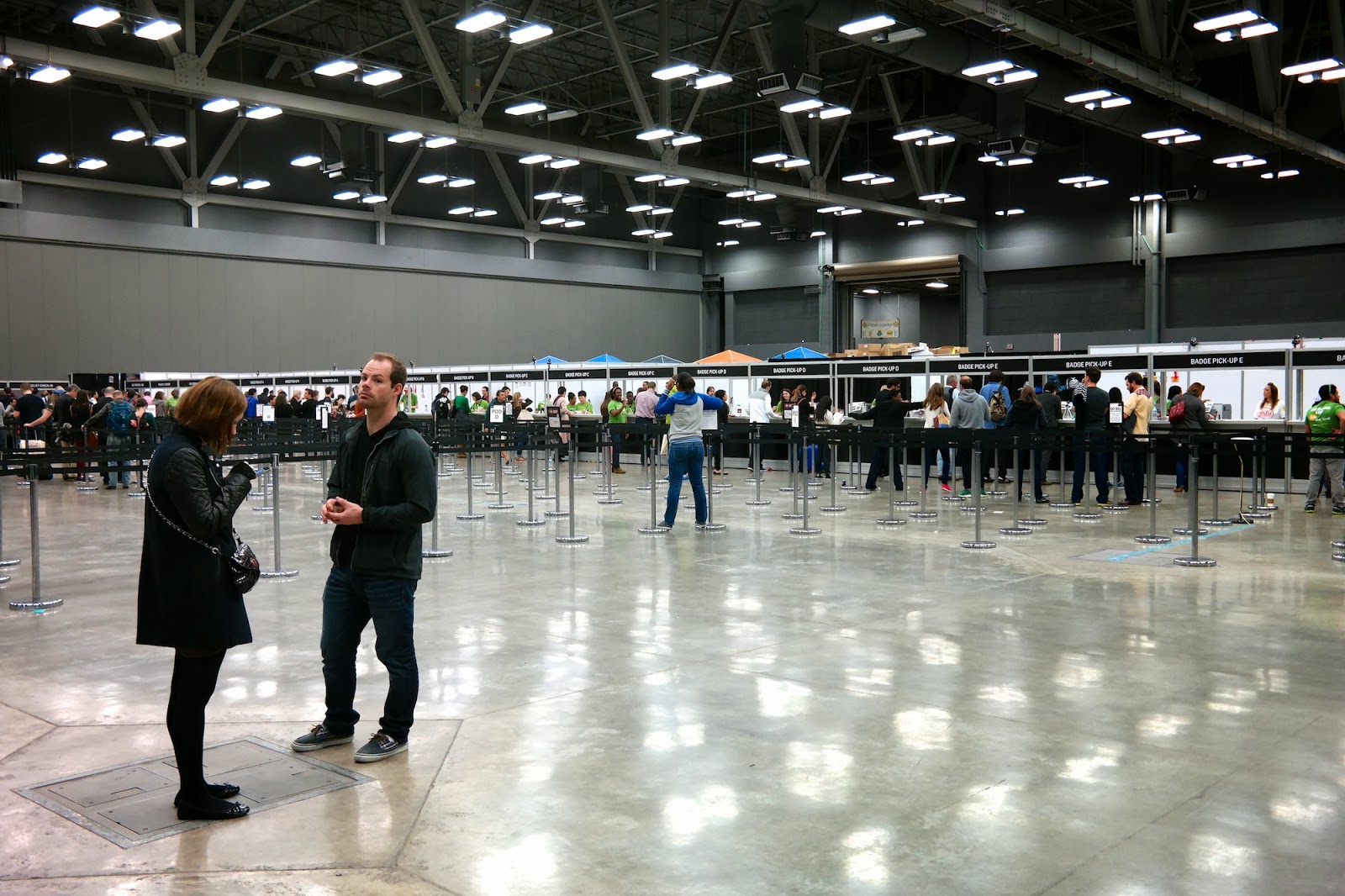 The Cavernous "Check in and Get your Badge" area. 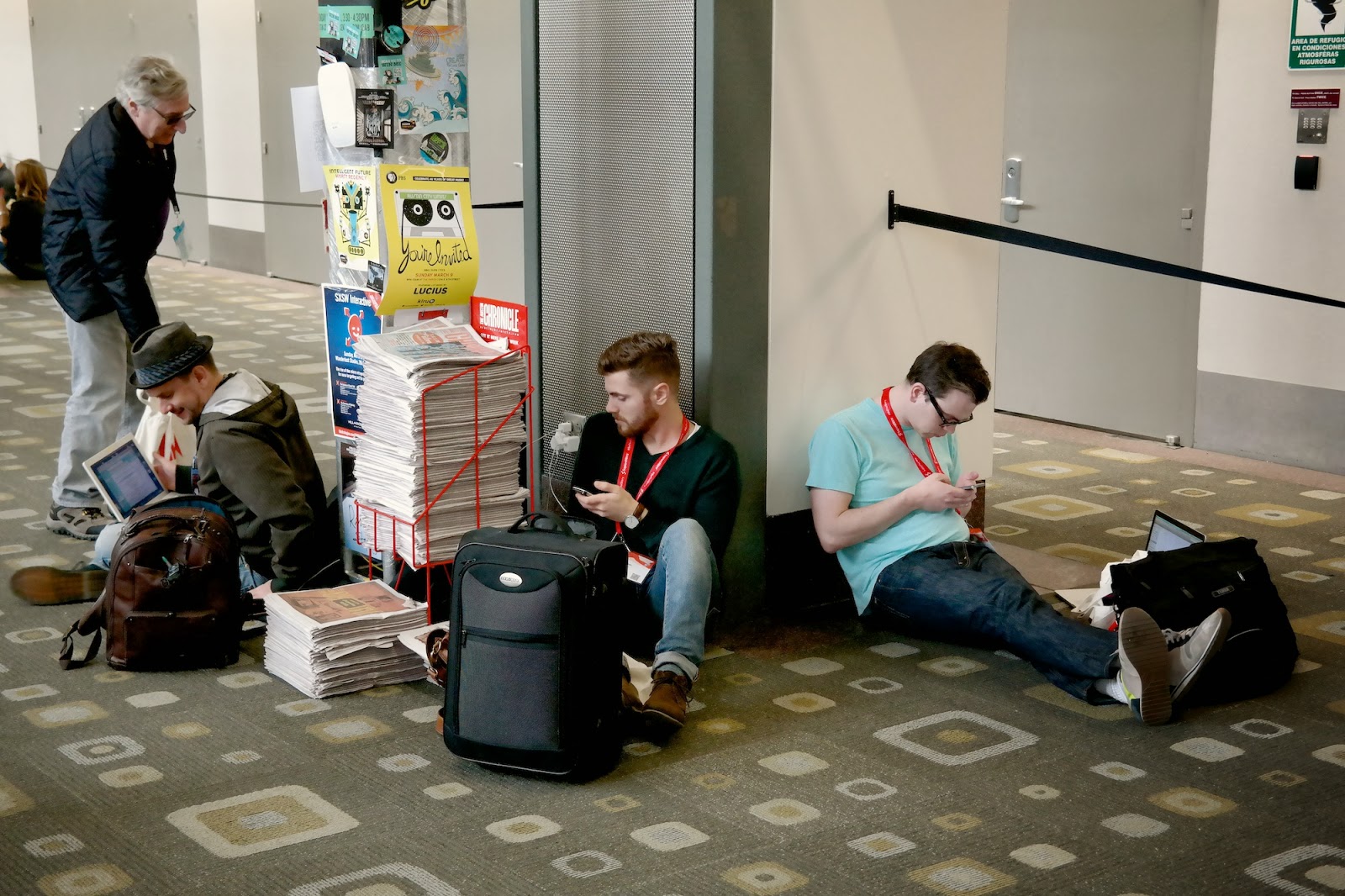 People of the floor. 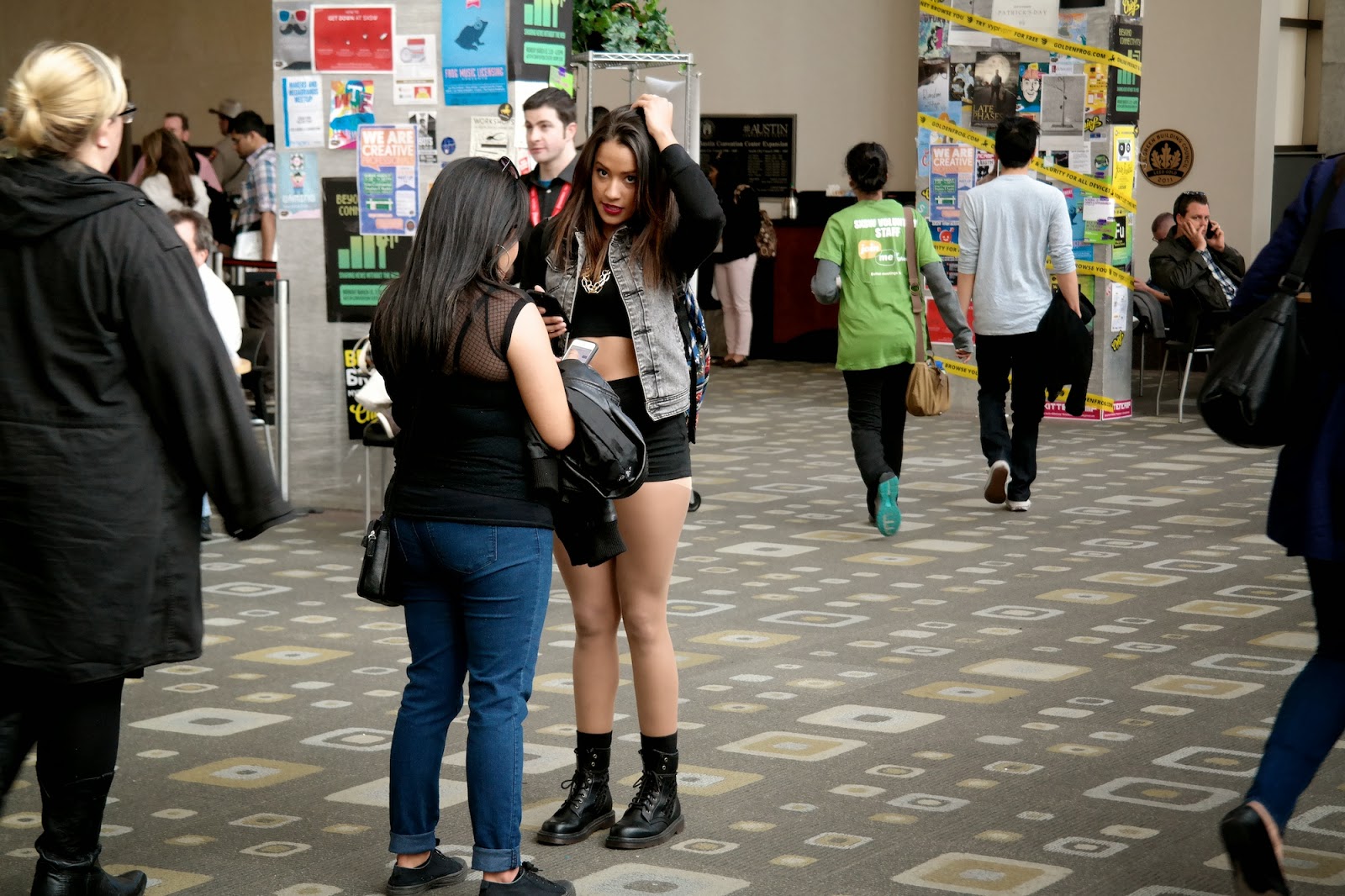 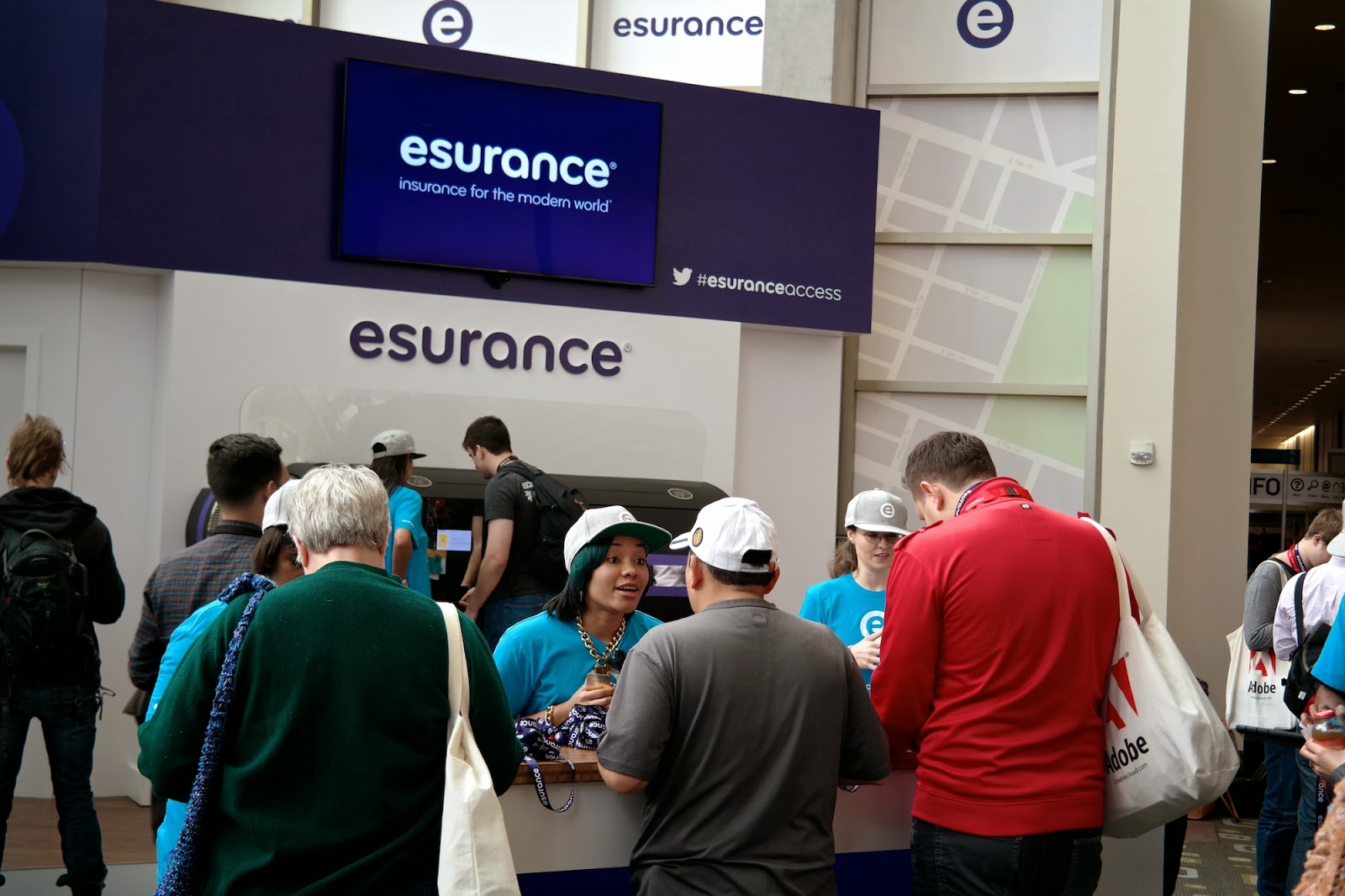 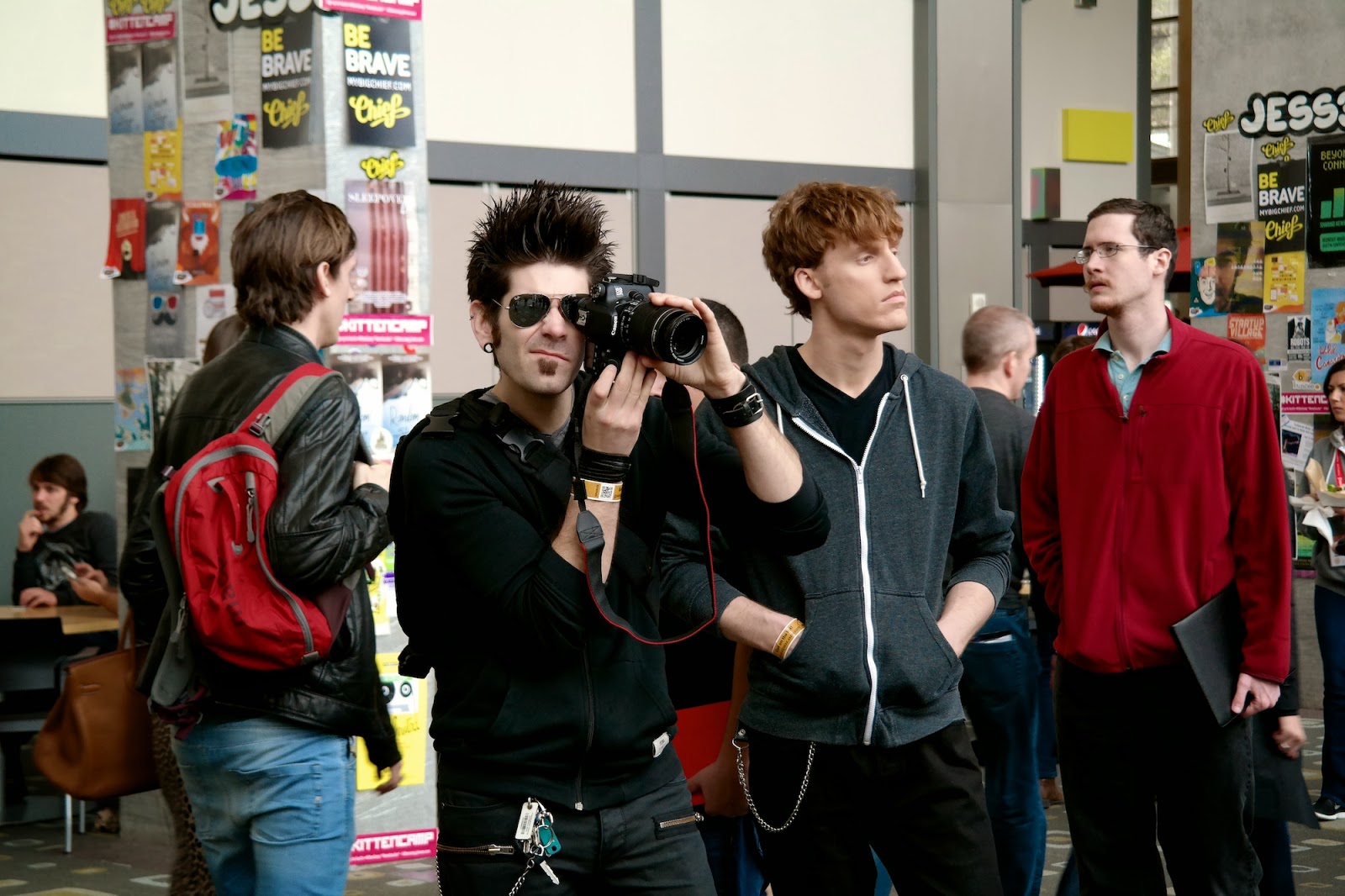 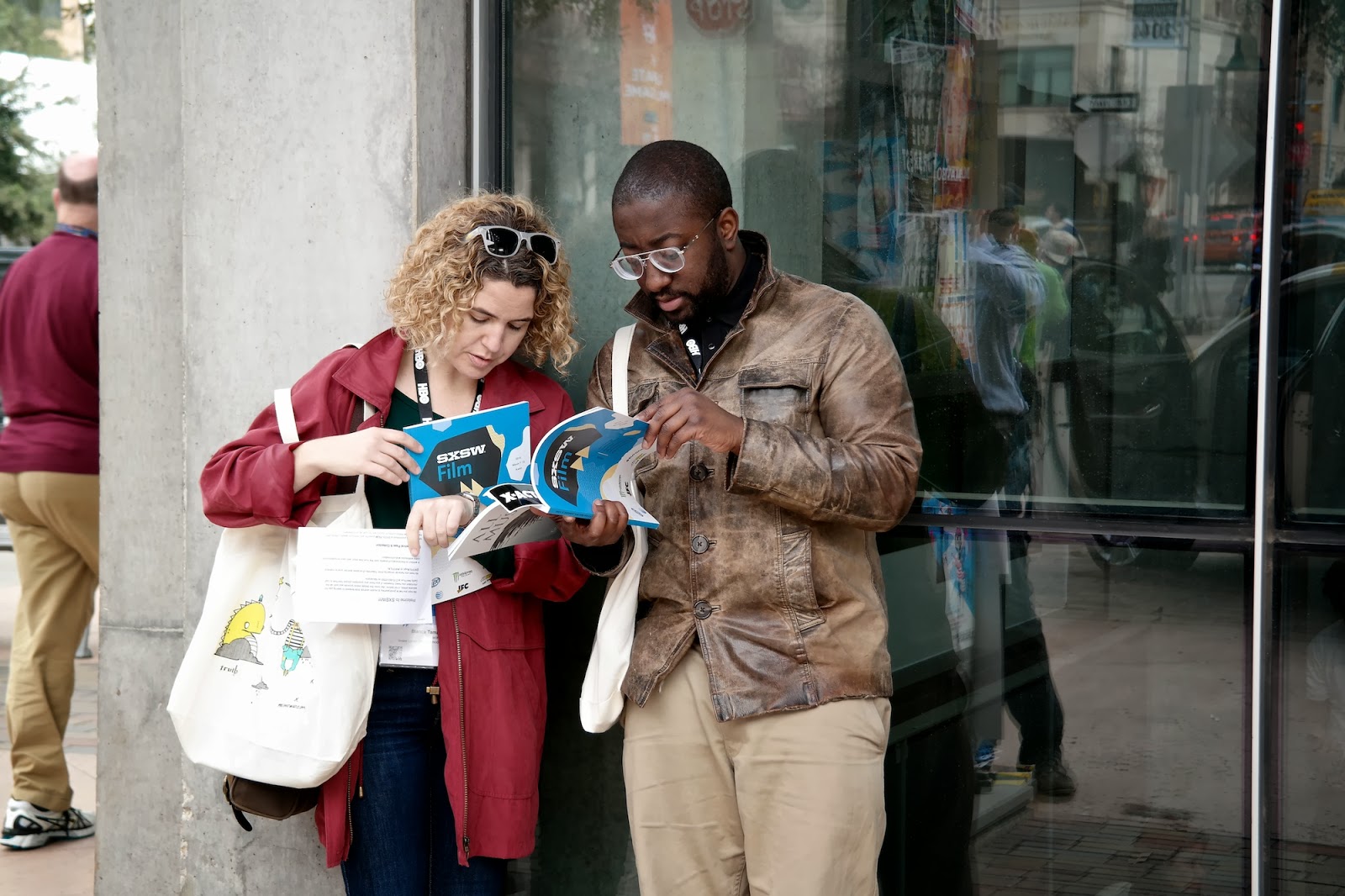 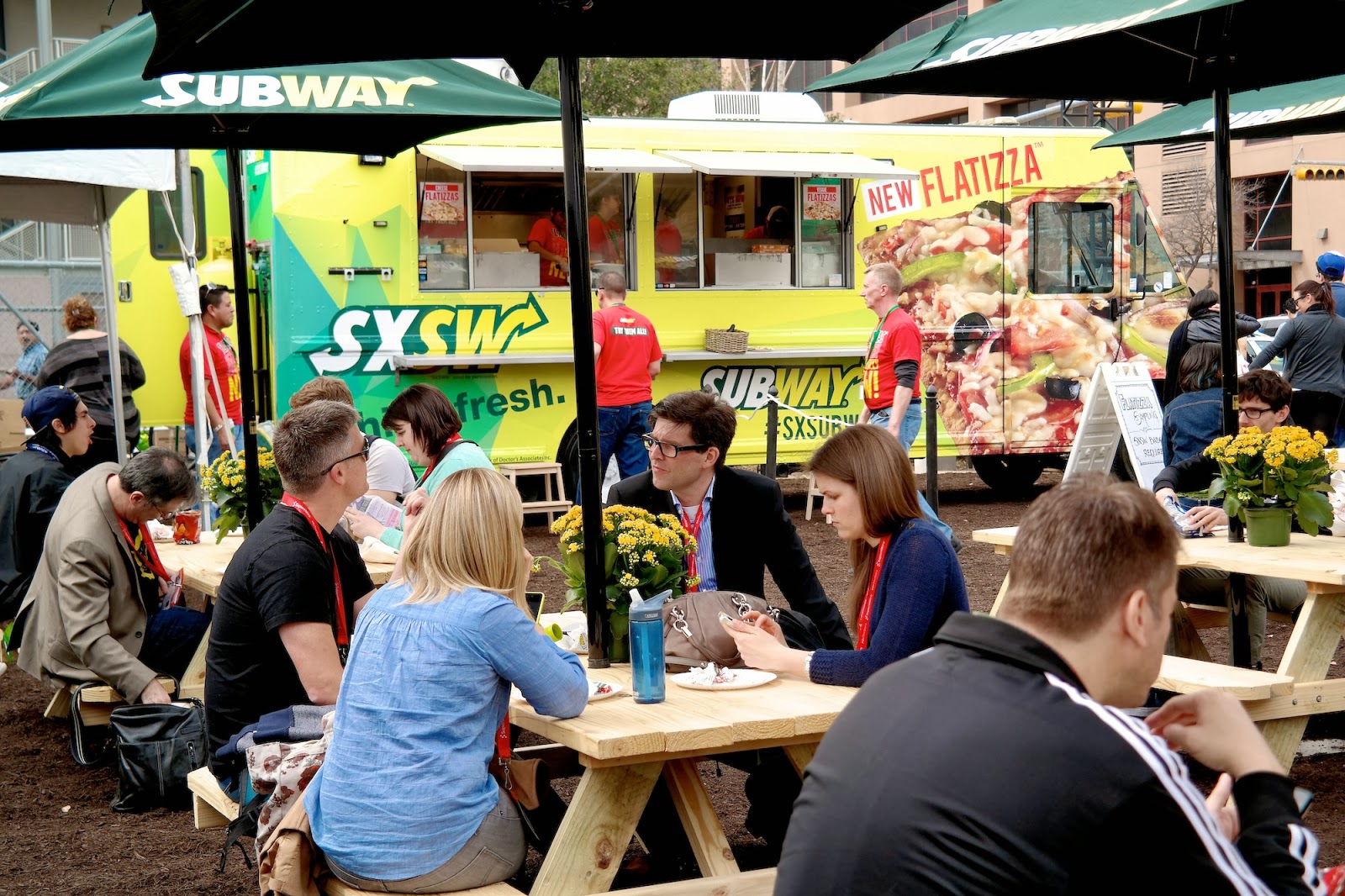 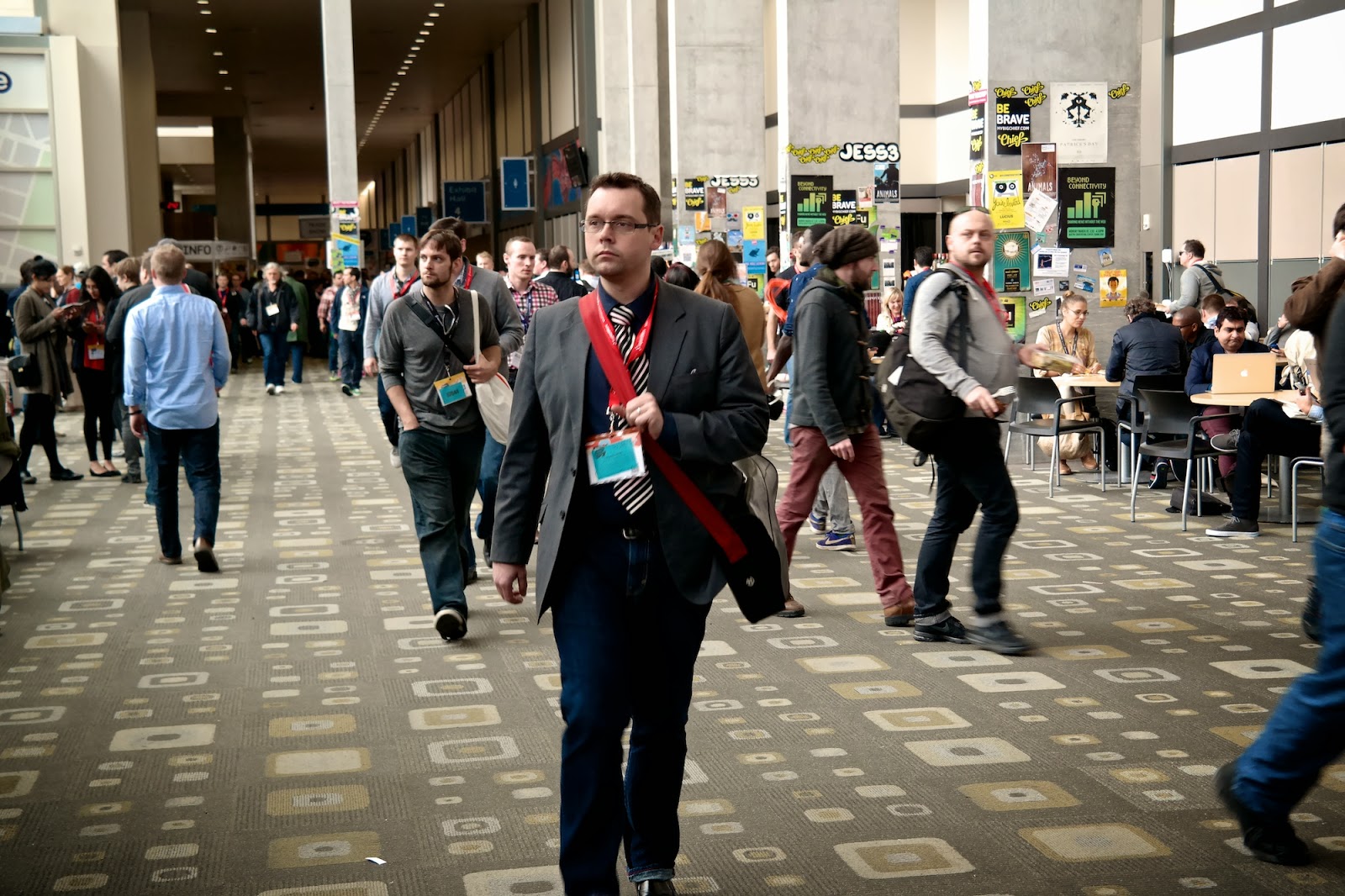 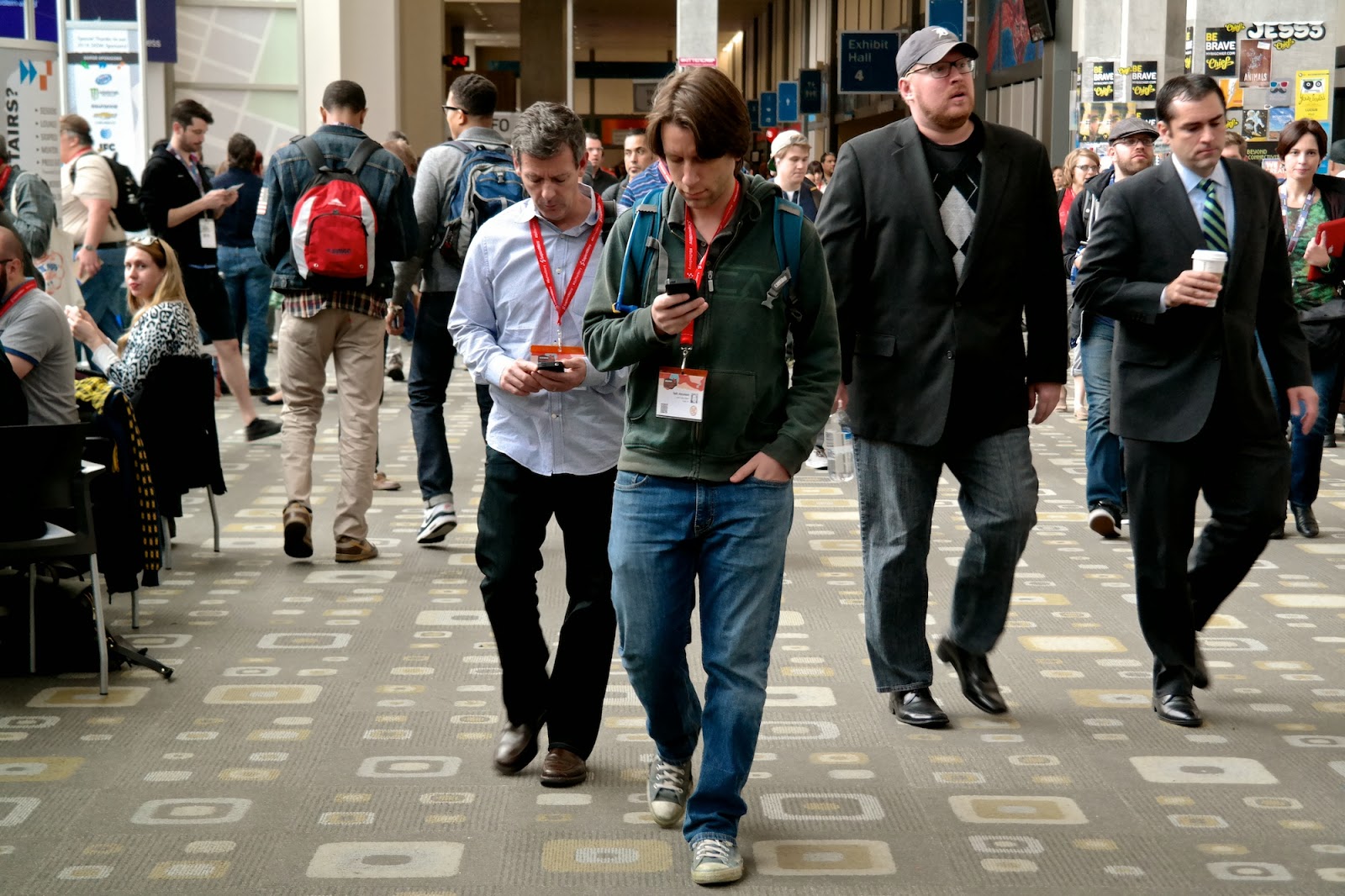 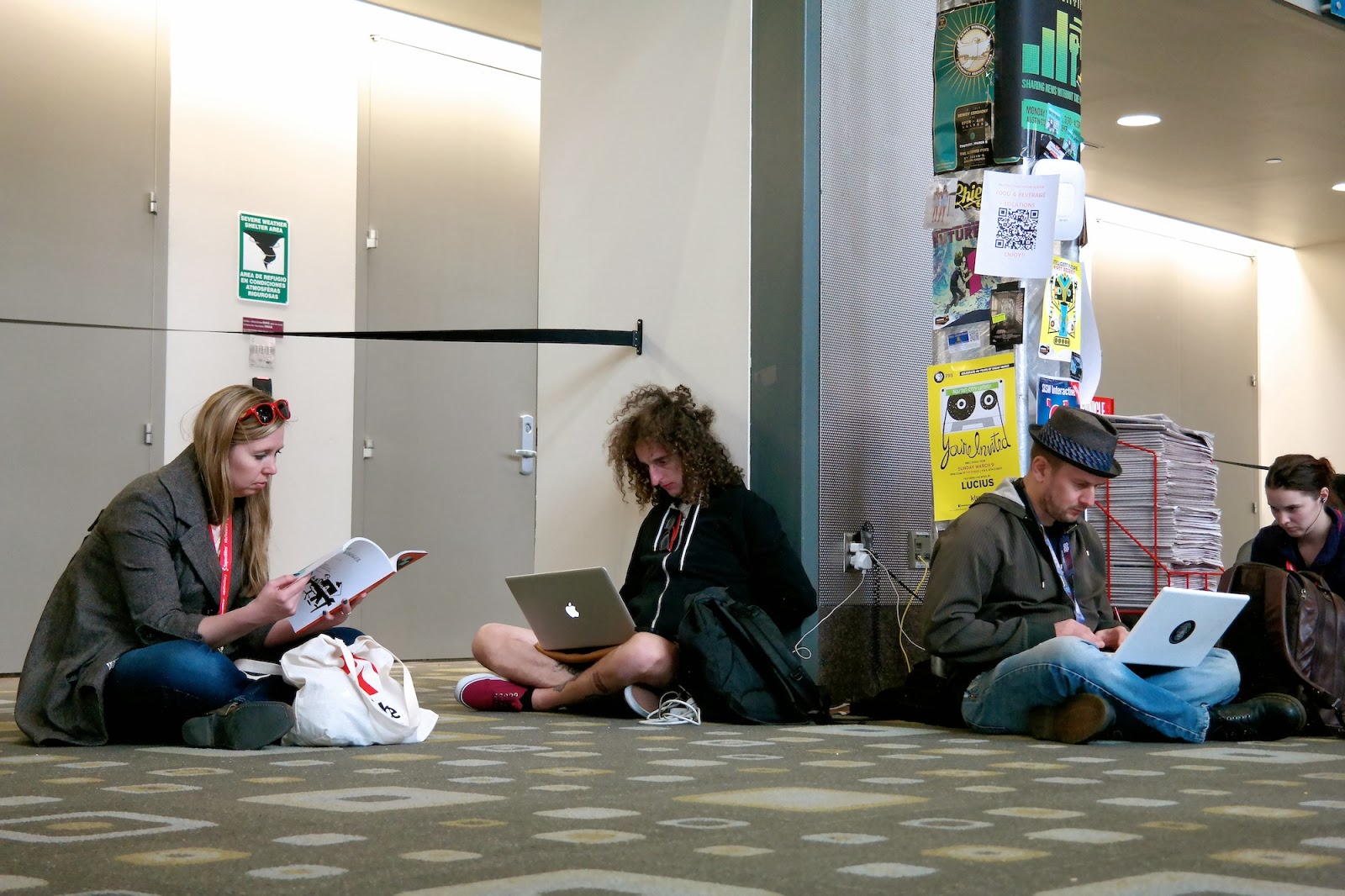 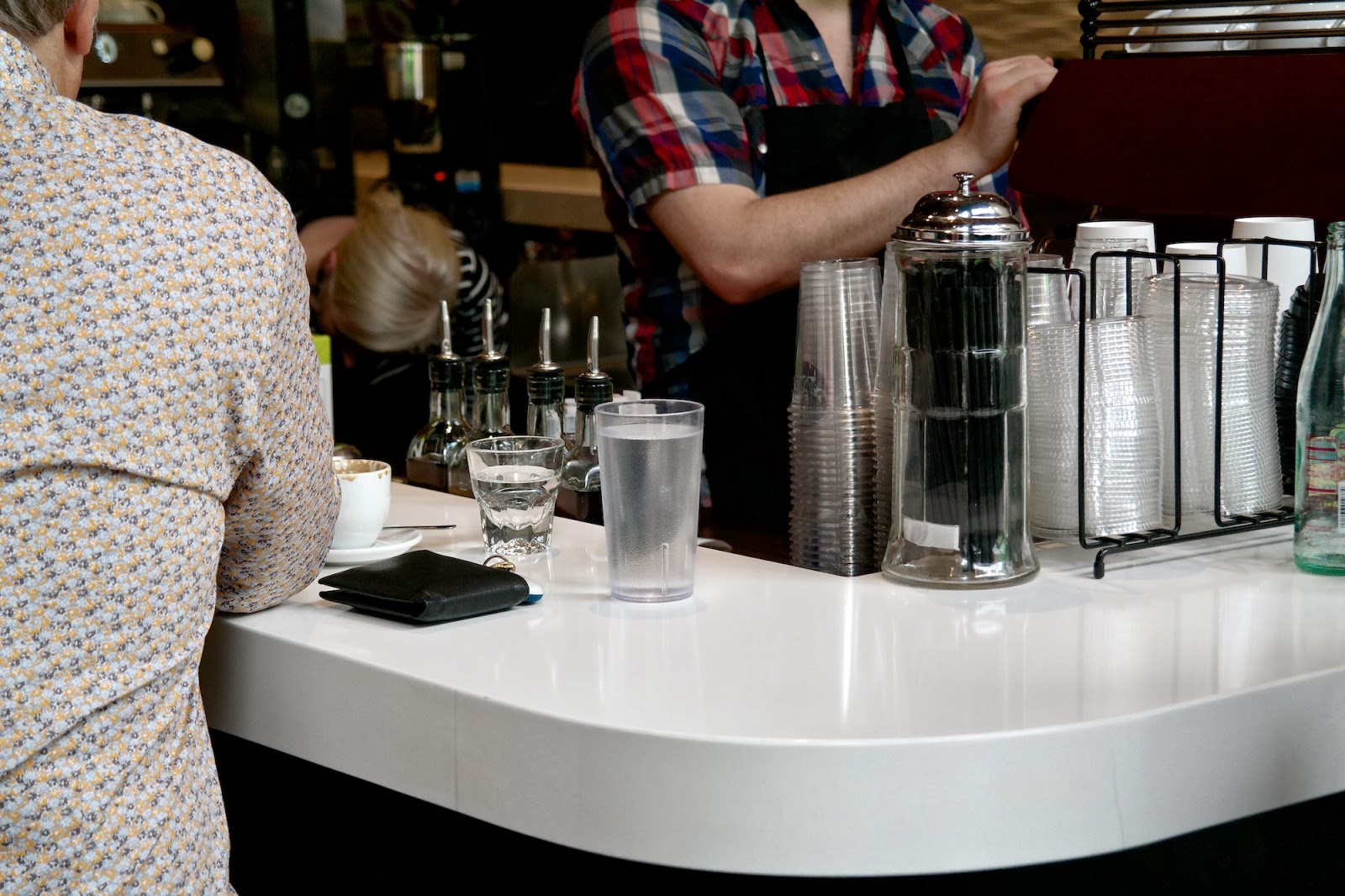 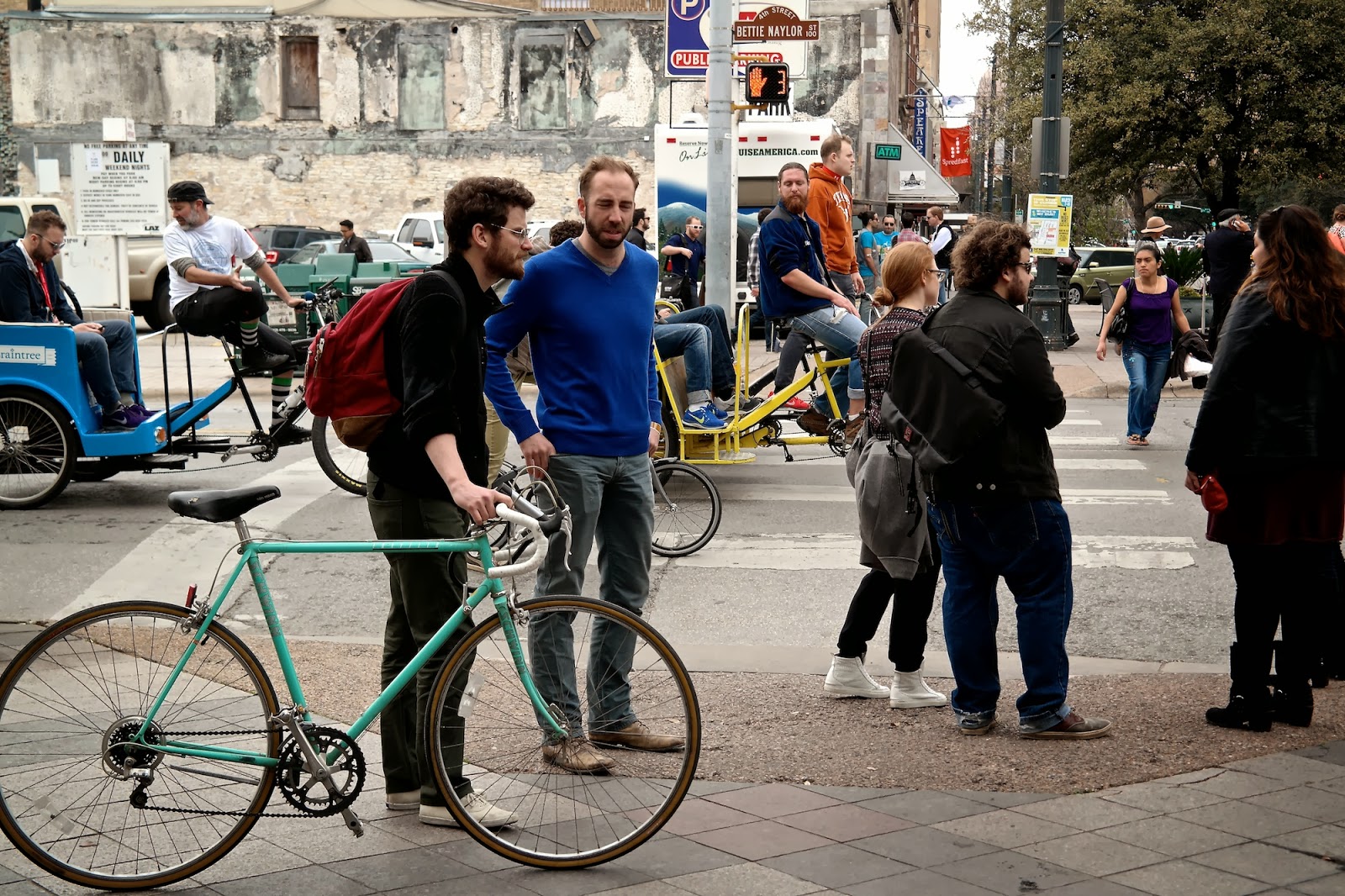 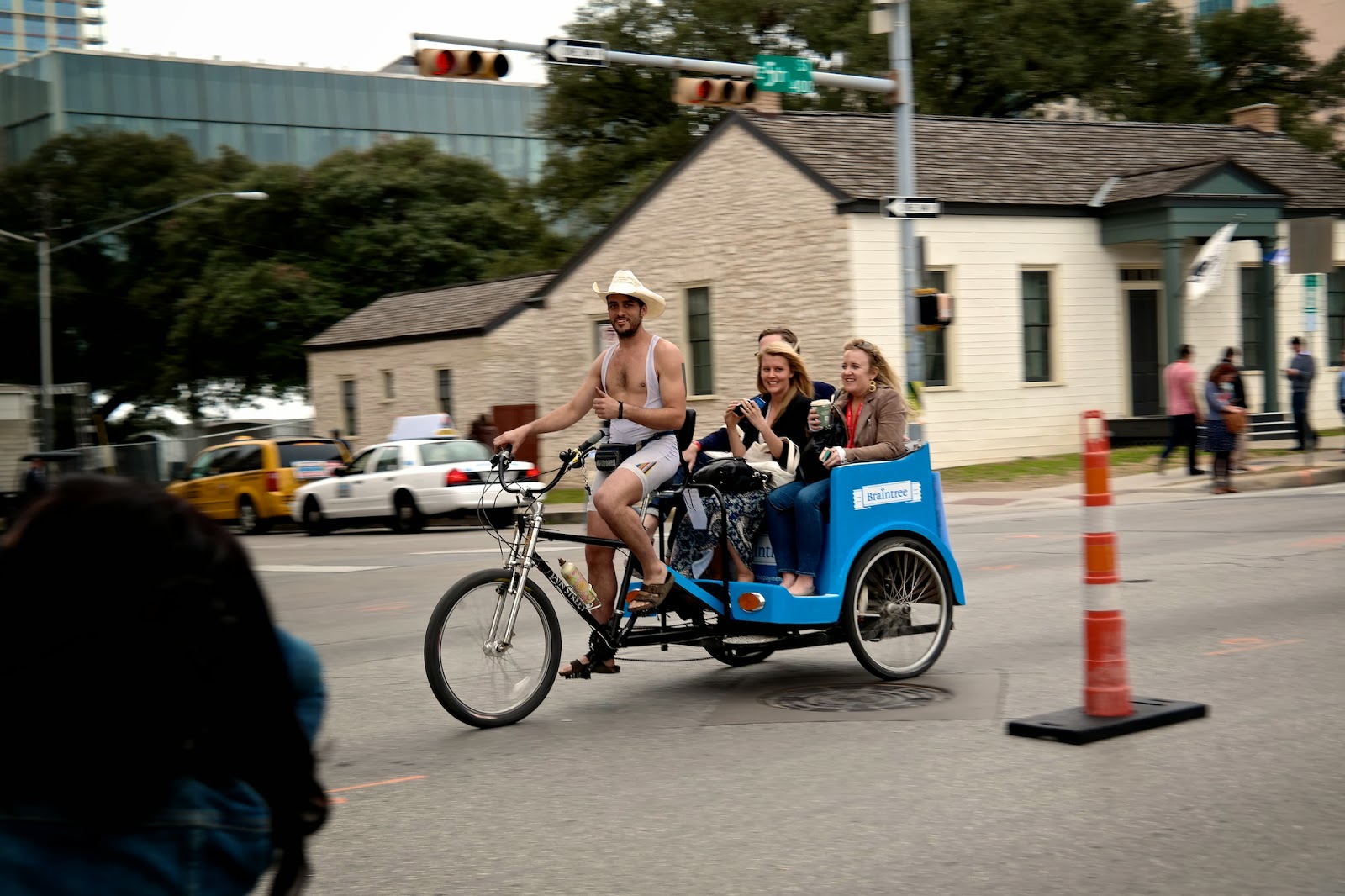 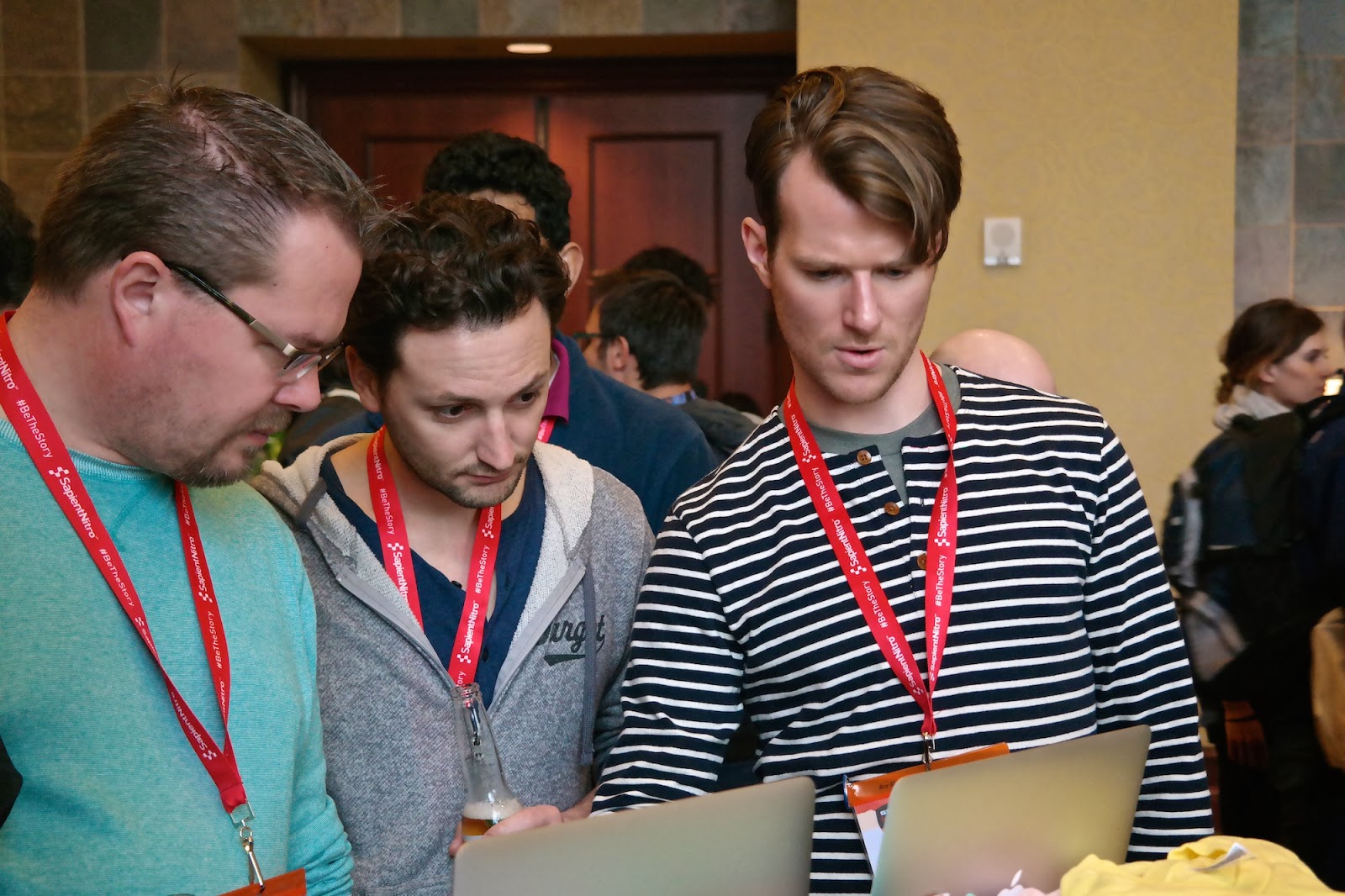 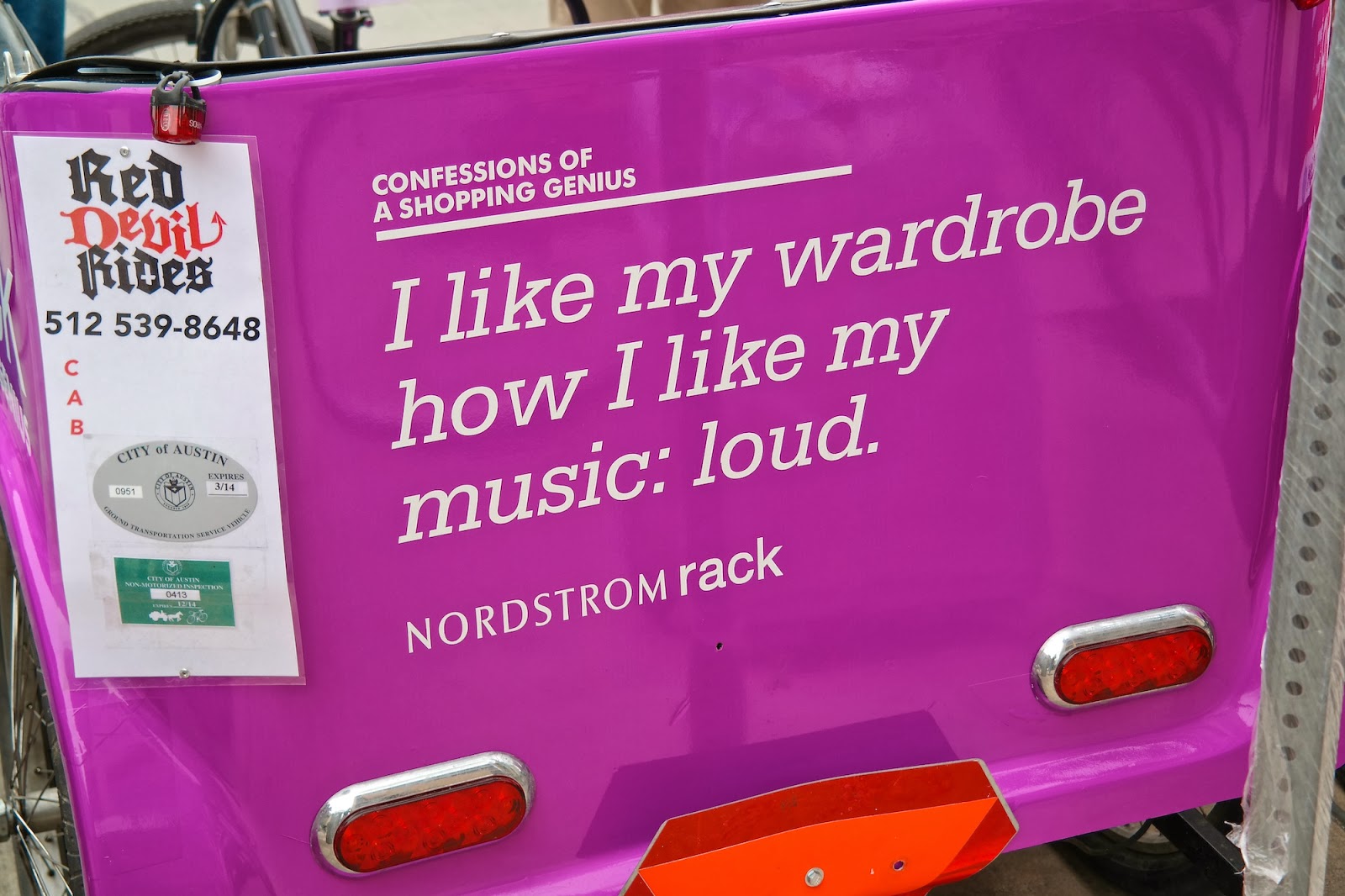 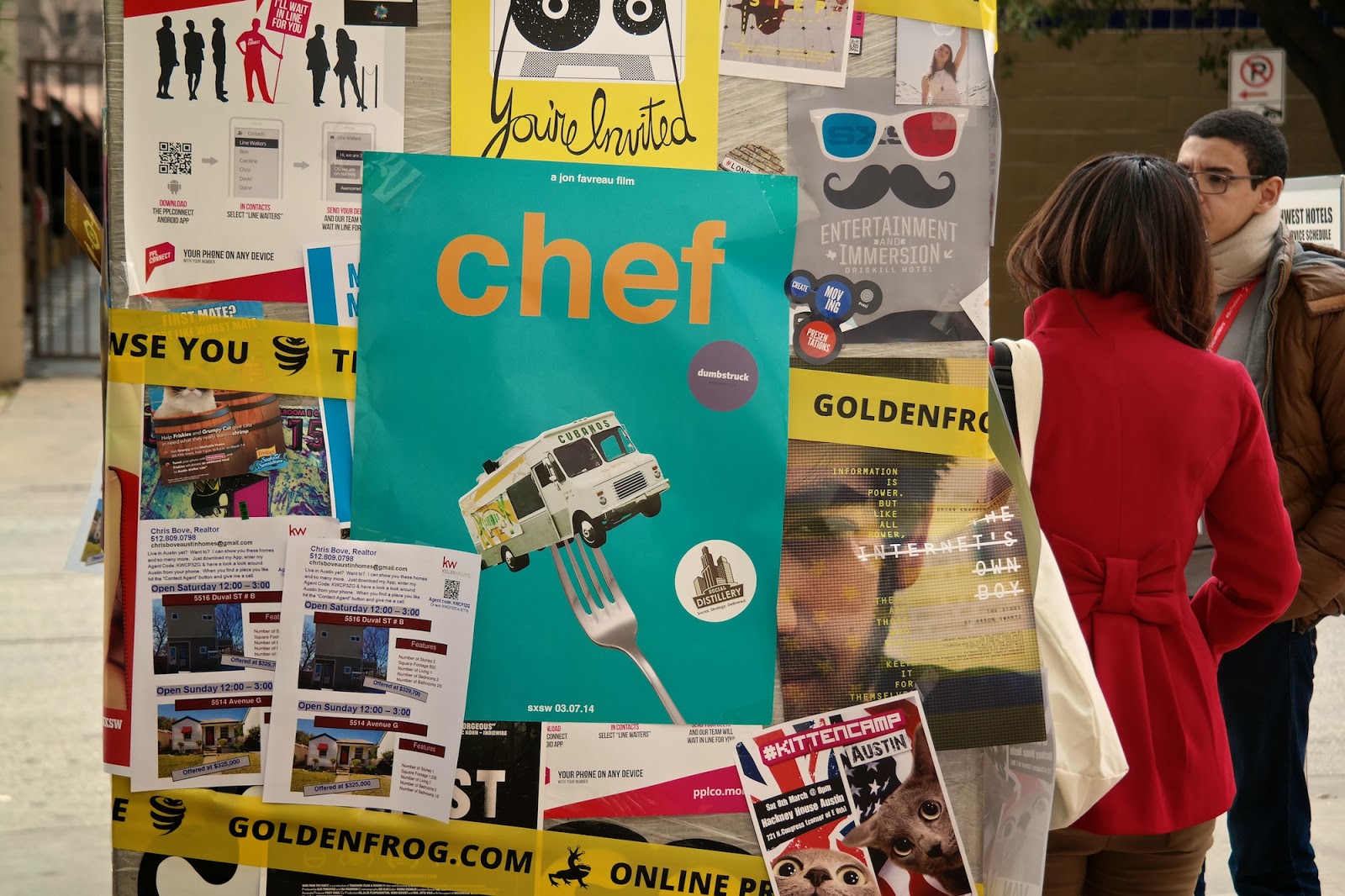 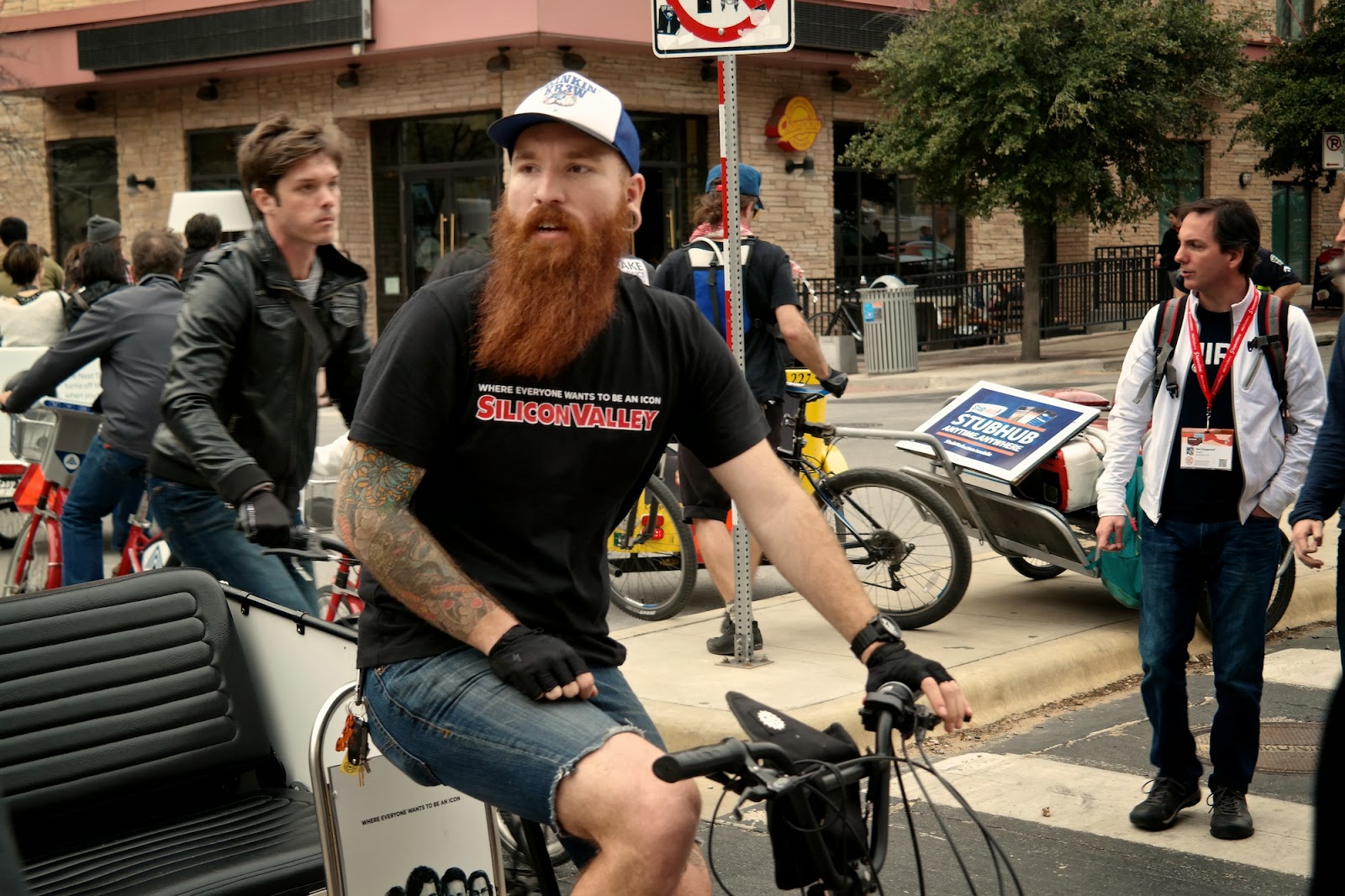 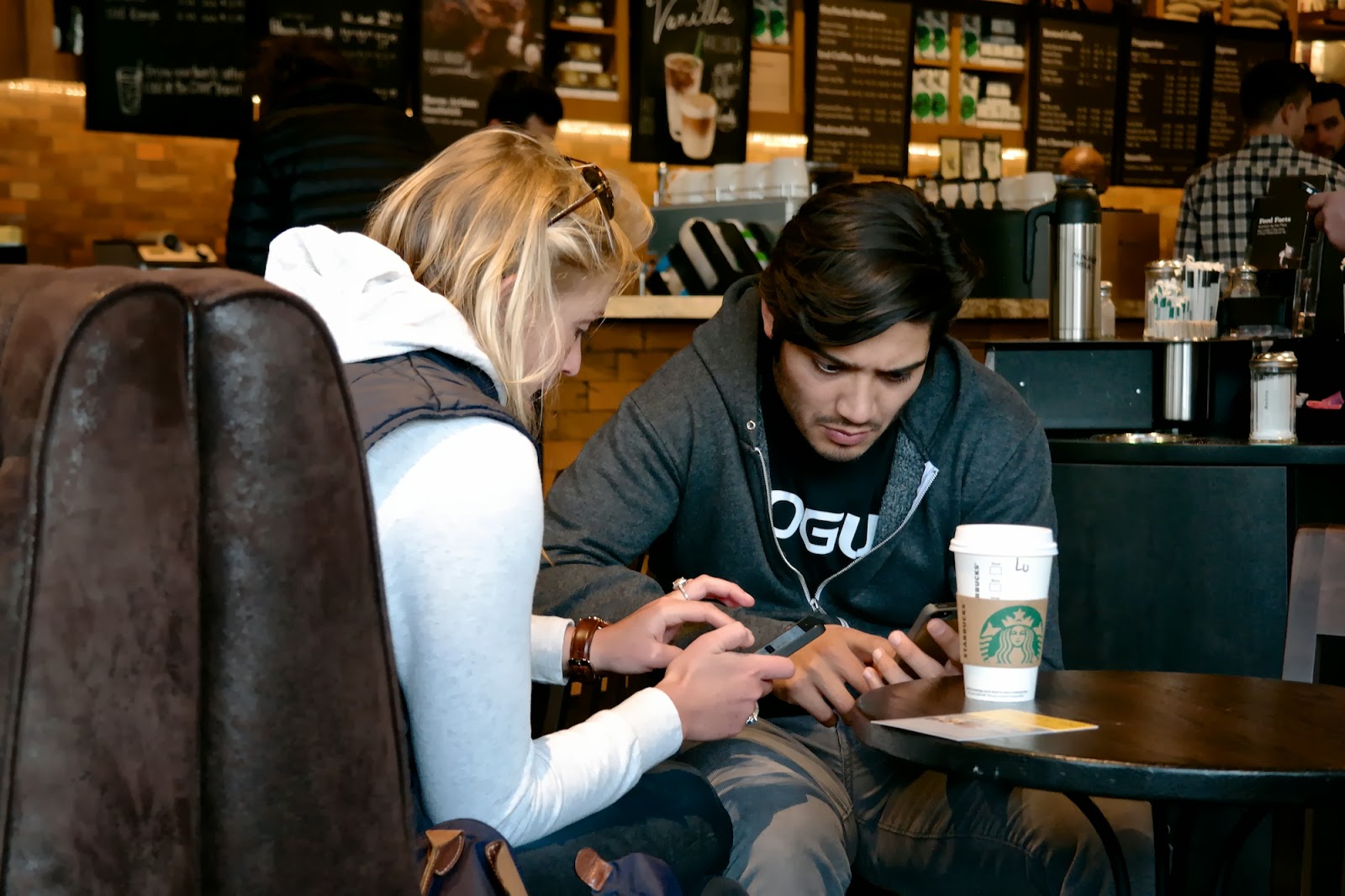 Posted by Kirk, Photographer/Writer at 19:01 12 comments: