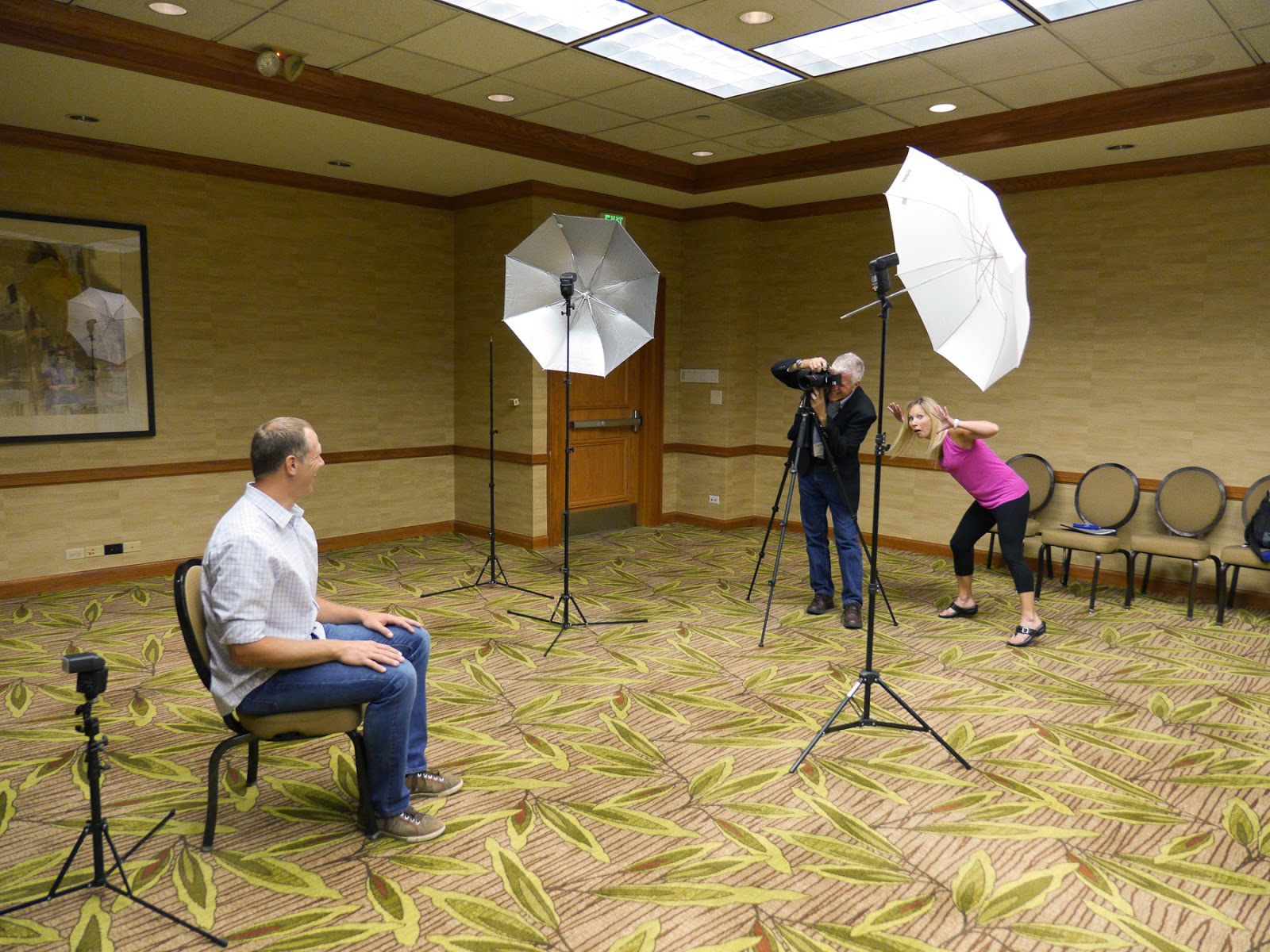 Background light at one sixteenth power.
Main light (on the right of the frame) one quarter power.
Fill light (near the center of the frame) at one eighth power.

Back in 2007 I wrote an entire book on the use of small, battery powered flashes used in the practice of professional photography. It's called Minimalist Lighting and it's still selling well on Amazon.com and in bookstores. The premise was the using small flashes with radio triggers or camera manufacturer's built in infra-red controllers would replace (in many applications) the older and more expensive traditional studio flash lighting we used to use. That book and David Hobby's Strobist site changed the landscape of lighting for professional and advanced amateur photographers.

But at some point I "fell off the wagon", went "cold turkey" on the "little flash Kool-aide" and started pulling out the bigger flashes again. Maybe I missed the modeling lights or maybe I got tired of changing batteries---I don't really know but it happened. Until the conference in Denver moved up the priority scale and I realized that I needed to put together a make-shift studio to take a series of group photos and head shots in. I wanted to travel light as there was no budget for an assistant and I hate dragging tons of stuff through airports (bigger lights generally mean bigger stands, heavy cables, extension cords and bigger cases!).  At that point I realized that I'd sold off all the Nikon flashes, all of the Canon flashes and all I had left was a little, dedicated flash for the Panasonic cameras and a nearly useless Sony HVL-60 flash from my a99 days.

I did my research, bought some Yongnuo 560 type 2 flashes, charged up all the Sanyo Eneloop batteries I could gather together, and packed a case with stands and on-camera flash adapters. Those and a brace of cheap umbrellas. Everything fit in one case.  And it was a case with wheels on it.

I got assigned to the "Gold" room, which I thought was a good omen. I set up the flashes as you see them above. Lost to the angle of the photo is the beautiful, muslin background that I dragged along.
We did maybe a dozen head shots and a big group shot and then I packed everything back up and continued to do my mobile work for the rest of the conference.

I learned (once again) that $120 for three flashes that have their own built in optical slaves is a screaming bargain. I learned that 1/4 power rocks for most stuff....especially now that all cameras are graceful at 400 ISO. I once again learned that traveling light is traveling happy. Small cameras and small flashes are just lovely for the post "fun to travel" times. 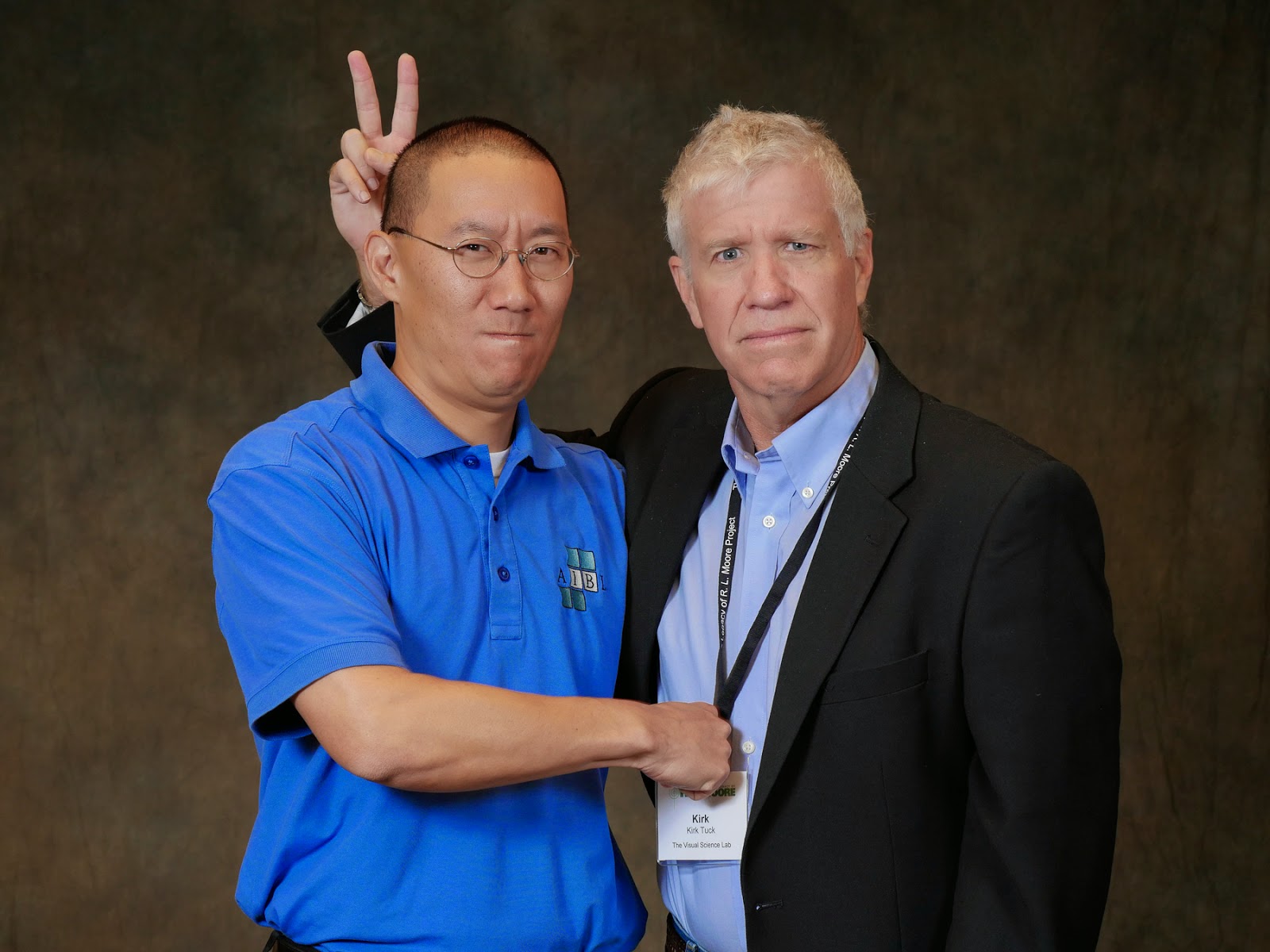 Stan Y. and Kirk test the lighting set up. 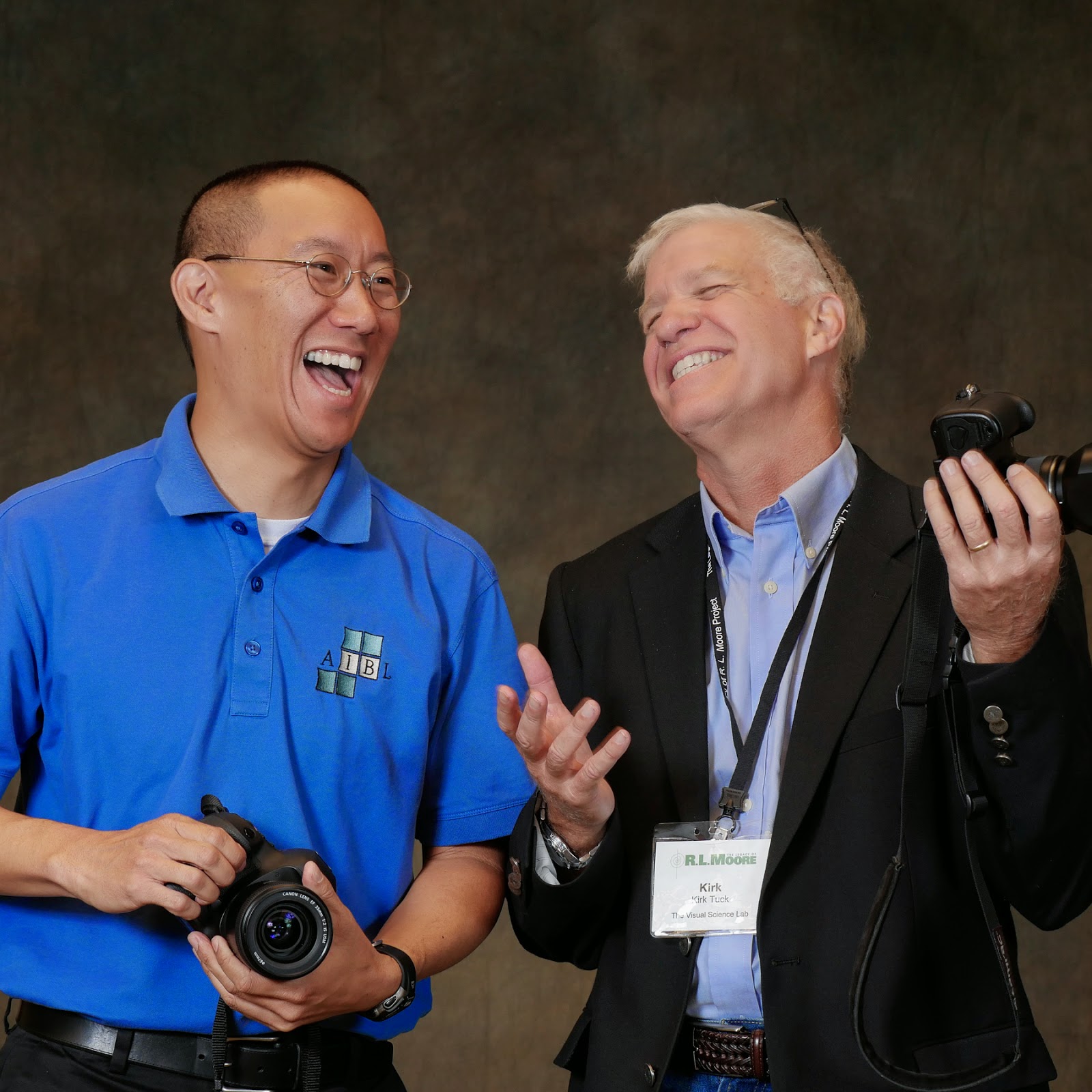 Stan and Kirk have a genuine good time at the Math Conference shoots.

Get your best bet for Summer Photo-Fiction Action and Adventure! Read it today!

Posted by Kirk, Photographer/Writer at 20:56 11 comments: 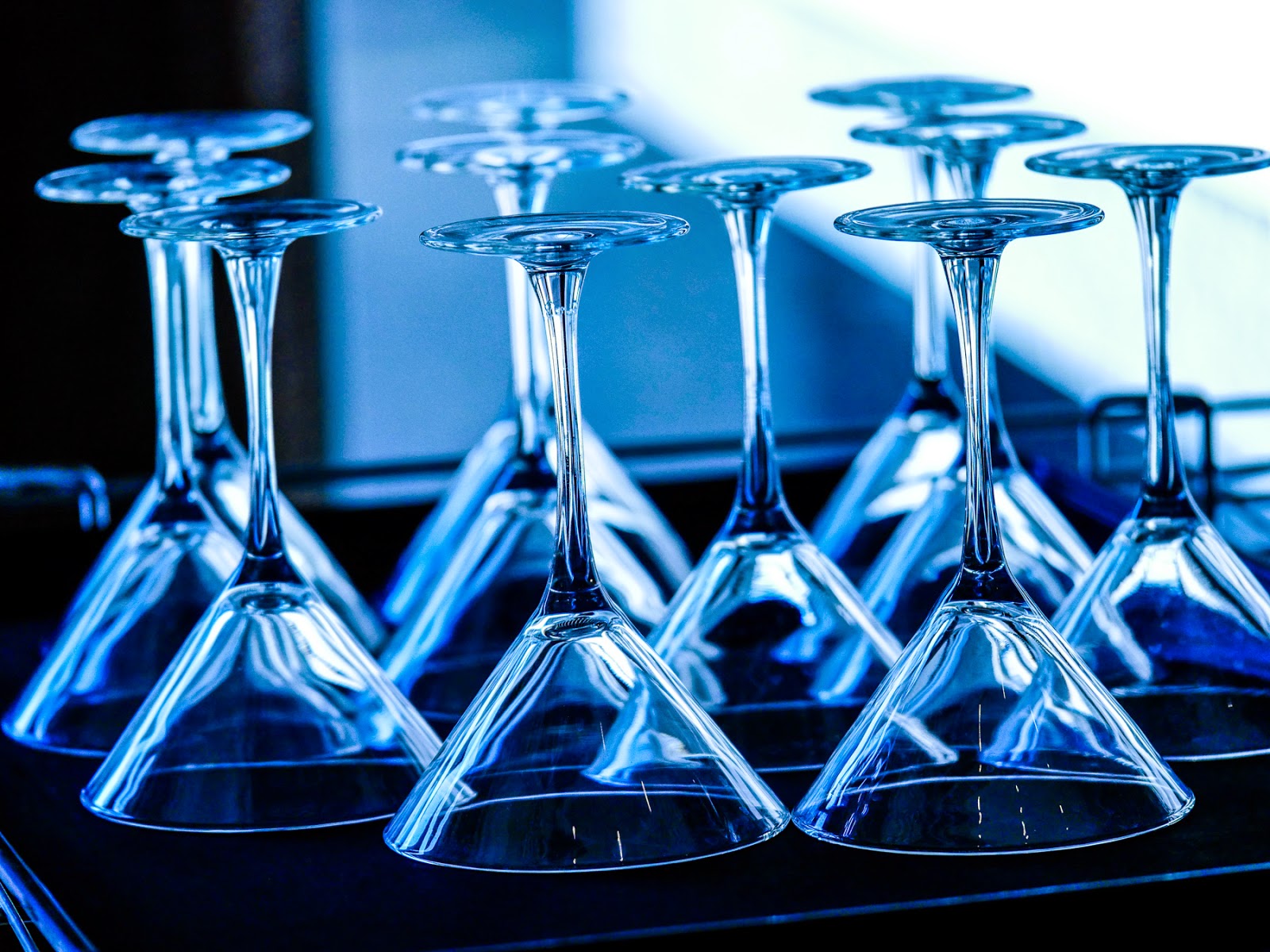 On Sunday I wrote an article about shooting a conference. I went on and on about the need to do custom white balances---especially if you are hellbent on shooting everything as a JPEG file. I forgot to mention (although most of you already know it...) that sometimes it's okay to use the "wrong" color balance setting.

I had just walked out of the very tungsten-y main ballroom and came across a rack of glassware that the hotel was bringing out to set up for a reception/happy hour. I love shooting repeating glass patterns so I grabbed the camera with the 12-35mm and banged off a few shots, neglecting to re-apply color sanity. Since all my cameras are "pre-chimp" capable I saw the issue right away and corrected back to "interior with predominant daylight" setting.

But when I got back to Austin and started editing and polishing the 3600+ images I'd taken I came across the "mistakes in glassware" and found that I loved the effect of the cold blue. Similarly, a "correct" white balance can also kill the wonderful colors of a sunset. When I shoot sunsets I've learned to set the camera's white balance to the little "sun" icon which puts the camera at 5500K with no hue shift. In this way I get all the rich, warm colors of the sunset because the prevailing color is much warmer and more color nuanced than direct sun would be.

Gotta love it when being wrong is more beautiful that being right...

Be sure to get the Novel! It's the perfect action adventure Summer Read for serious Photographers.

Posted by Kirk, Photographer/Writer at 16:25 2 comments: