This is the best wide angle lens I've shot with in a long, long time. For APS-C camera owners it's a treasure. Above is the Rokinon 16mm f2.0 wide angle lens for smaller than 24x36mm cameras. It's very good.

This is an article written to talk about the virtues of one lens. I buy Rokinon lenses because I've never been burned by the company. Everything I've owned has performed flawlessly. I bought three lenses from them that were sold when I abandoned the Sony a99 and it was sad to see them go. The most used of the three was the 85mm 1.4. I used it almost exclusively to photograph the partners at three different law firms in town and I used it at or near its widest aperture many times. It was reasonably good wide open but stopped down to f4 it was remarkably good. Better than the Zeiss 85mm 1.4 (MF) that I used to own for the Canon system.

The second Rokinon lens I bought was the 35mm t1.5 Cine lens for the Sony Alpha mount. It too was a fine performer. Not perfect wide open but by f2.8 it was darn sharp and didn't have many visible flaws, even hanging over the from of a full frame 24 megapixel camera. The final lens, also a cine version was the Rokinon 14mm t3.3. While that lens had geometric distortion galore it too was very sharp and there were many resources for lens profiles that tamed the honking big barrel distortion with no sweat in Lightroom and PhotoShop.

As I dive deeper into the world of APS-C it becomes obvious that the underserved part of the lens spectrum for those cameras is fast, wide angle primes. They mostly don't exist from the big name manufacturers. There are variations of zooms galore but damn few fast single focal length lenses. And the wider you go the fewer the choices. 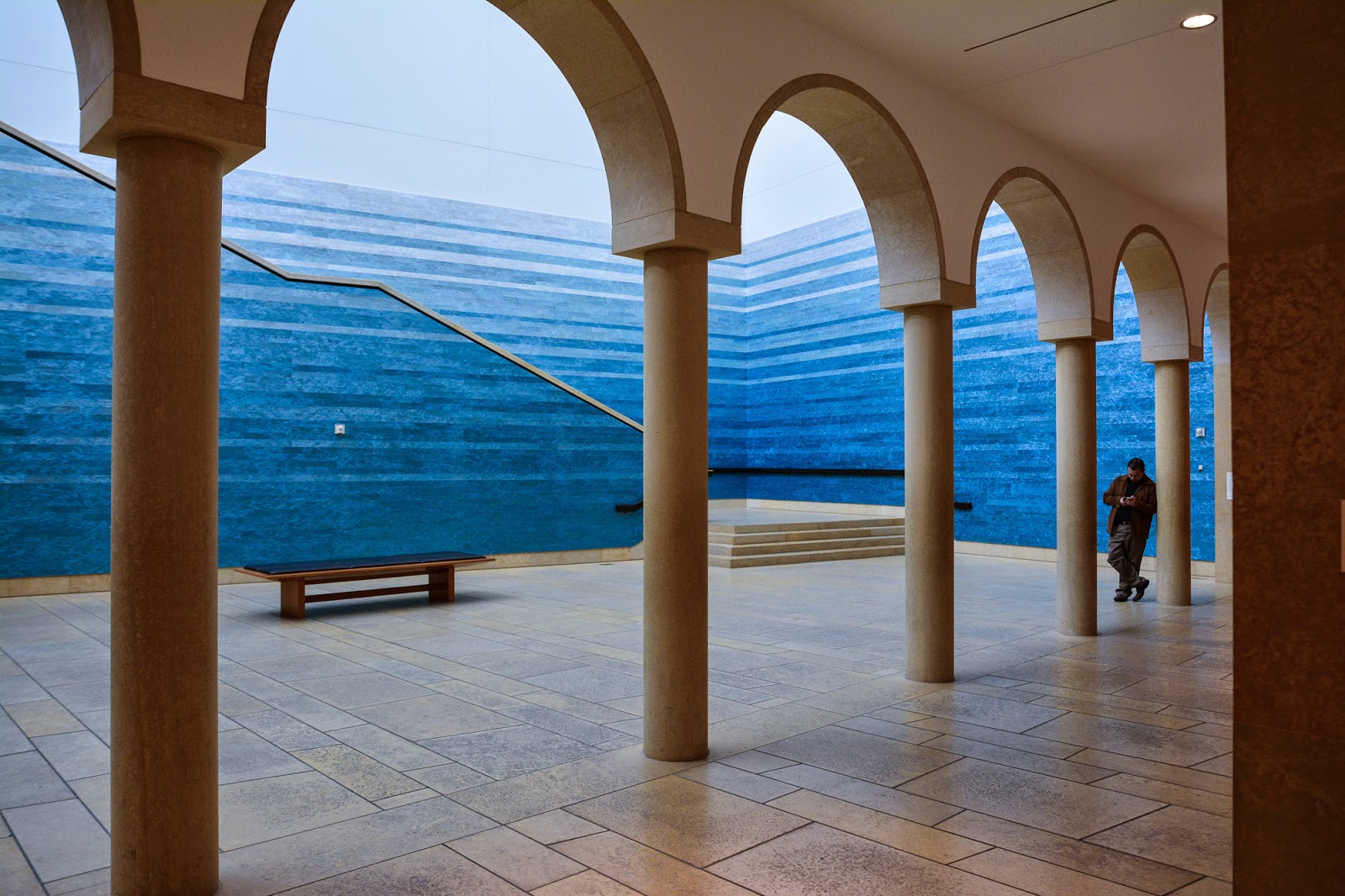 The lens I wanted most for the Nikon D7100 and 7000's, a fast focal length around a 24mm equivalent (based on traditional 24x36mm). I looked through the Nikon inventory and the Tamron and the Sigma catalogs but I didn't find the "Goldilocks Formula." I found it in the Rokinon offerings. And, frankly, I trust the lens design and construction of these simple, manual focus lenses a lot more than I trust everyone else's over featured, zooming and stabilizing lenses. Call me old fashioned but my past life training tells me that the simpler the design and the few the number of moving pieces the more reliable a piece of equipment will be. I nosed around on Amazon and found just what I was looking for; the Rokinon 16mm DX f2.0 Asperical lens in a Nikon mount, complete with a chip that tells the camera what the f-stop settings are and enables autoexposure and accurate exposure. 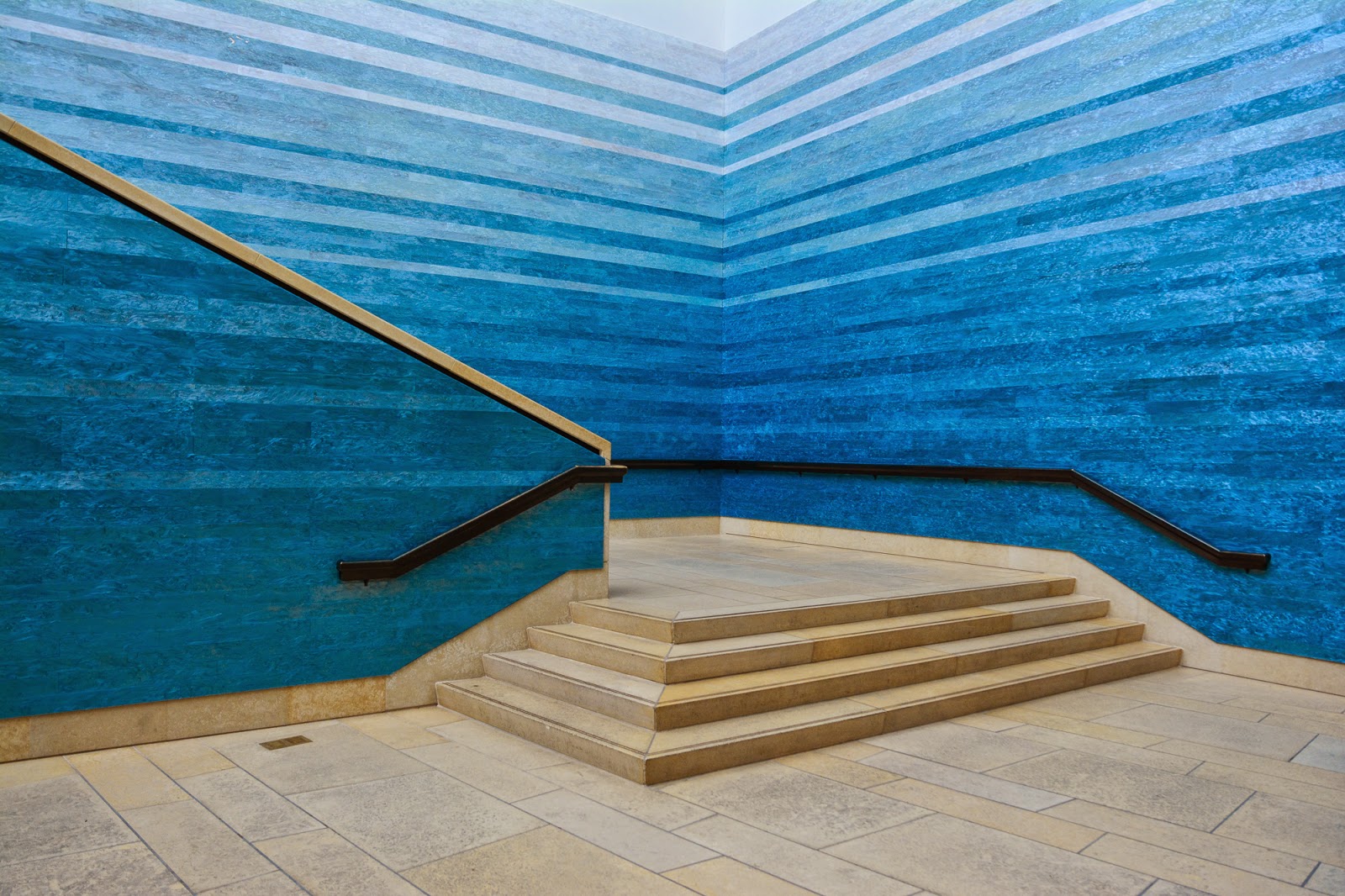 The lens is solid but purists will gnash their teeth and rip their garments when they discover that the filter ring is plastic as is a fair proportion of the body of the lens. I don't care because I know plastic can be more indestructible and reliable than metal. The lens feels great in action because it features a smooth, wide throw focusing ring that's as smooth as Hollandaise Sauce. The lens is made up of thirteen elements in eleven groups and that includes two aspherical elements. The front of the lens has a 77mm filter ring and comes with a hood and a pinch style lens cap.

Since I never take an untested lens for granted I could hardly wait to get out and put it through its paces but Austin weather hasn't been cooperating. It's been unseasonably cloudy and gloomy here, not nearly the usual paradise of sunshine and open outdoor bars that December has featured in the past. So after I finished all of my work and answered my e-mail and went to swim practice (yay! swim practice...) I grabbed the D7100 and the Rokinon  16mm and headed over to the Blanton Museum where I could act like I was enjoying the new, James Drake: Anatomy of Drawing and Space (Brain Trash) show (which I actually did like very much) but instead I was using my attendance at this venue as a foil for my real purpose, the testing of the lens.  Here's what I found: 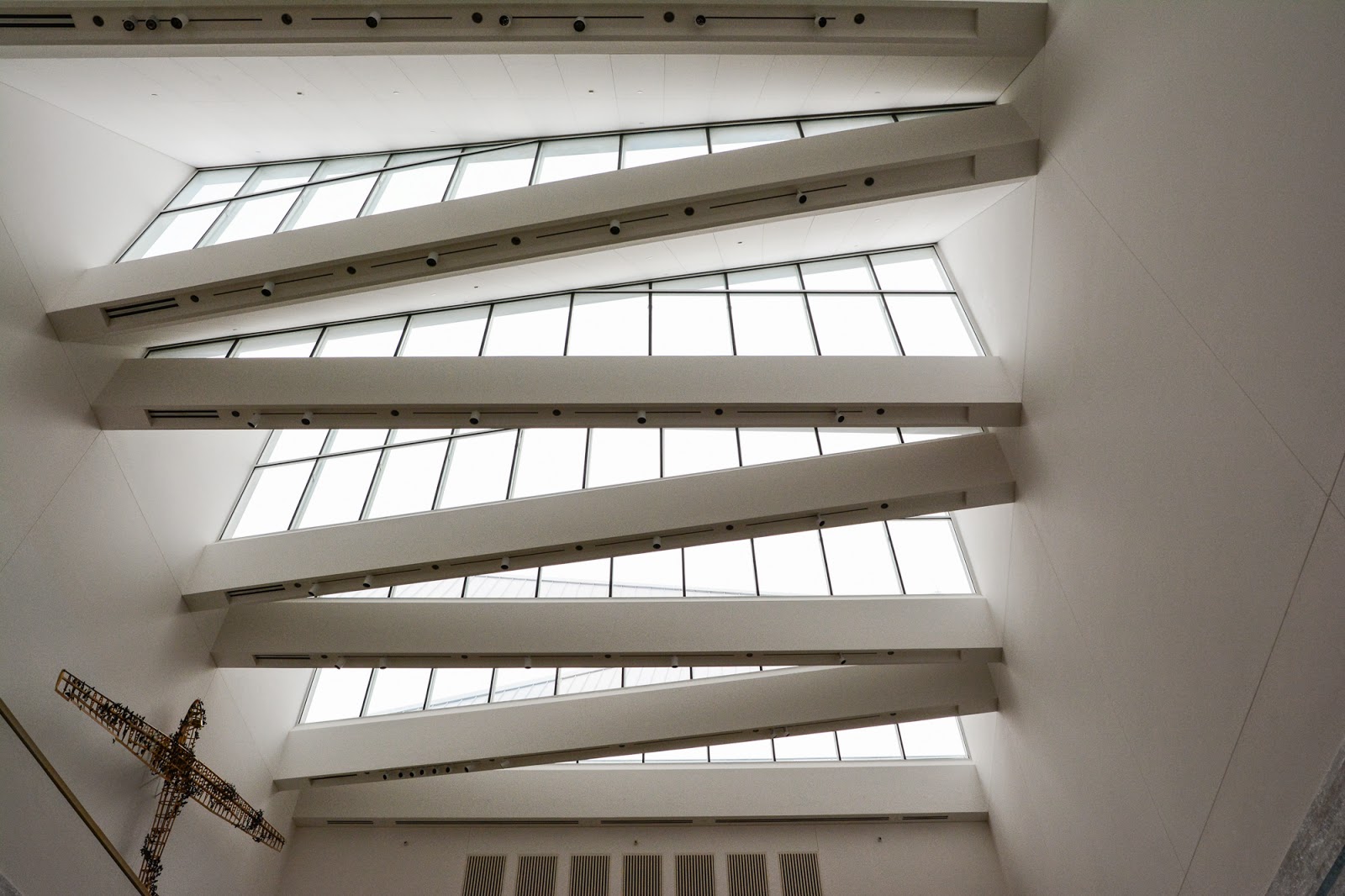 While it's never easy to manually focus a fast, wide lens on a small sensor optical screen with no good focusing features like peaking or split image focusing aids live view makes up for a lot of that. The lens is very, very good wide open. Sharp as a lancet over at least 66% of the frame, from the center out. Stopped down to f2.8 it's sharp everywhere and by f4 and even more so by f5.6, it's a monster of exquisite sharpness over every nanometer of the frame. Top to bottom, left to right. 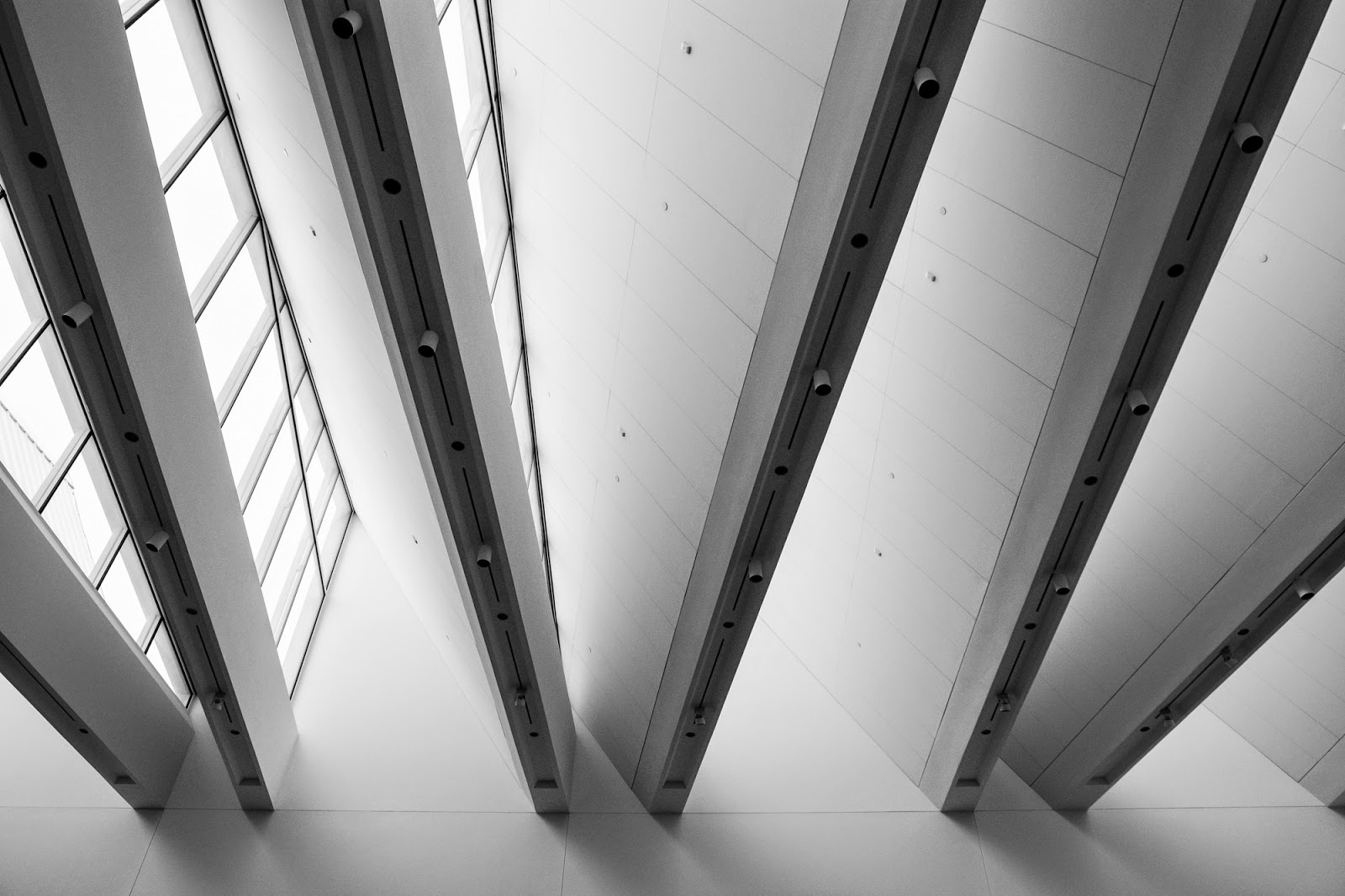 I started with wide shots at f4 and f5.6 and went from there. Here's the ceiling (above) over the main atrium at the Blanton Museum. I looked at the image at 100 % and I can't find the flaws. If I can't see them there then they don't exist for me. 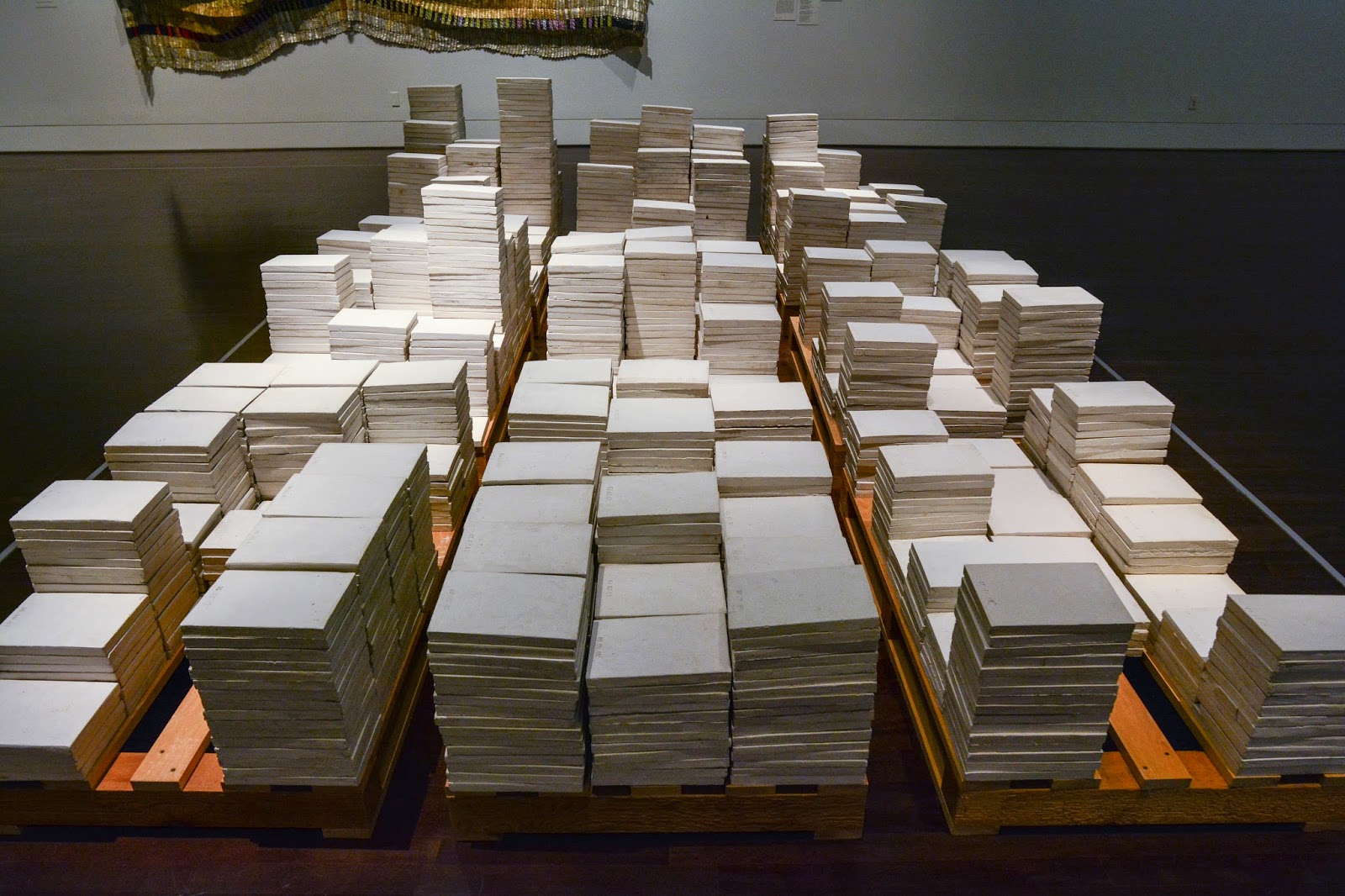 The above image of the square tiles is a great test of left to right, edge to edge sharpness. I hope I've given you a big enough file to look at. I can see lots of texture and detail in the original 6000 x 4000 pixel file. The lack of an AA filter really does benefit the fine detail at lower and low/middle apertures. 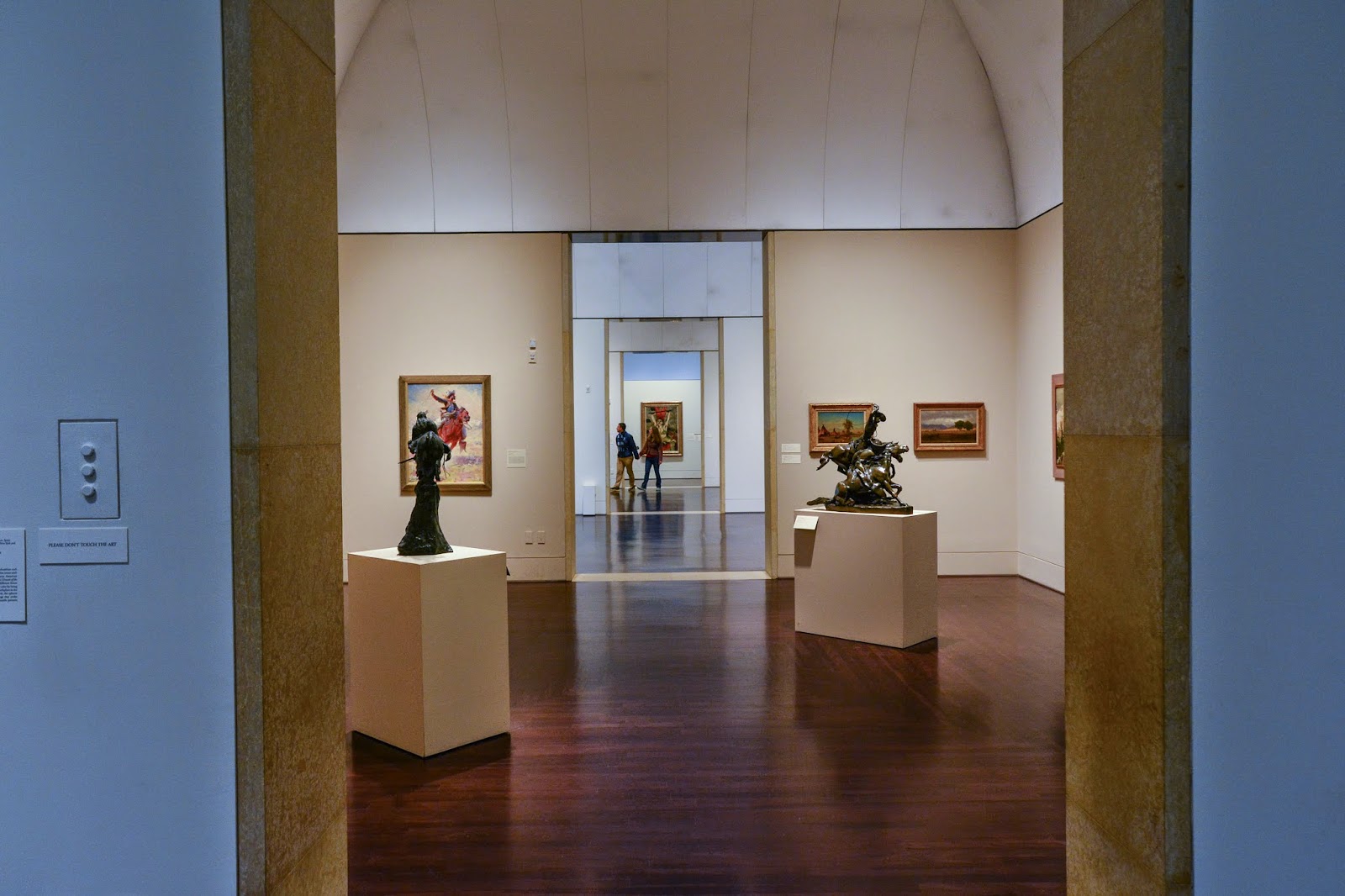 The lens does have some gentle barrel distortion that I found easy to correct in PS. I left the frames intact, as shot, so you can see what the lens actually does when you shoot it without corrections. 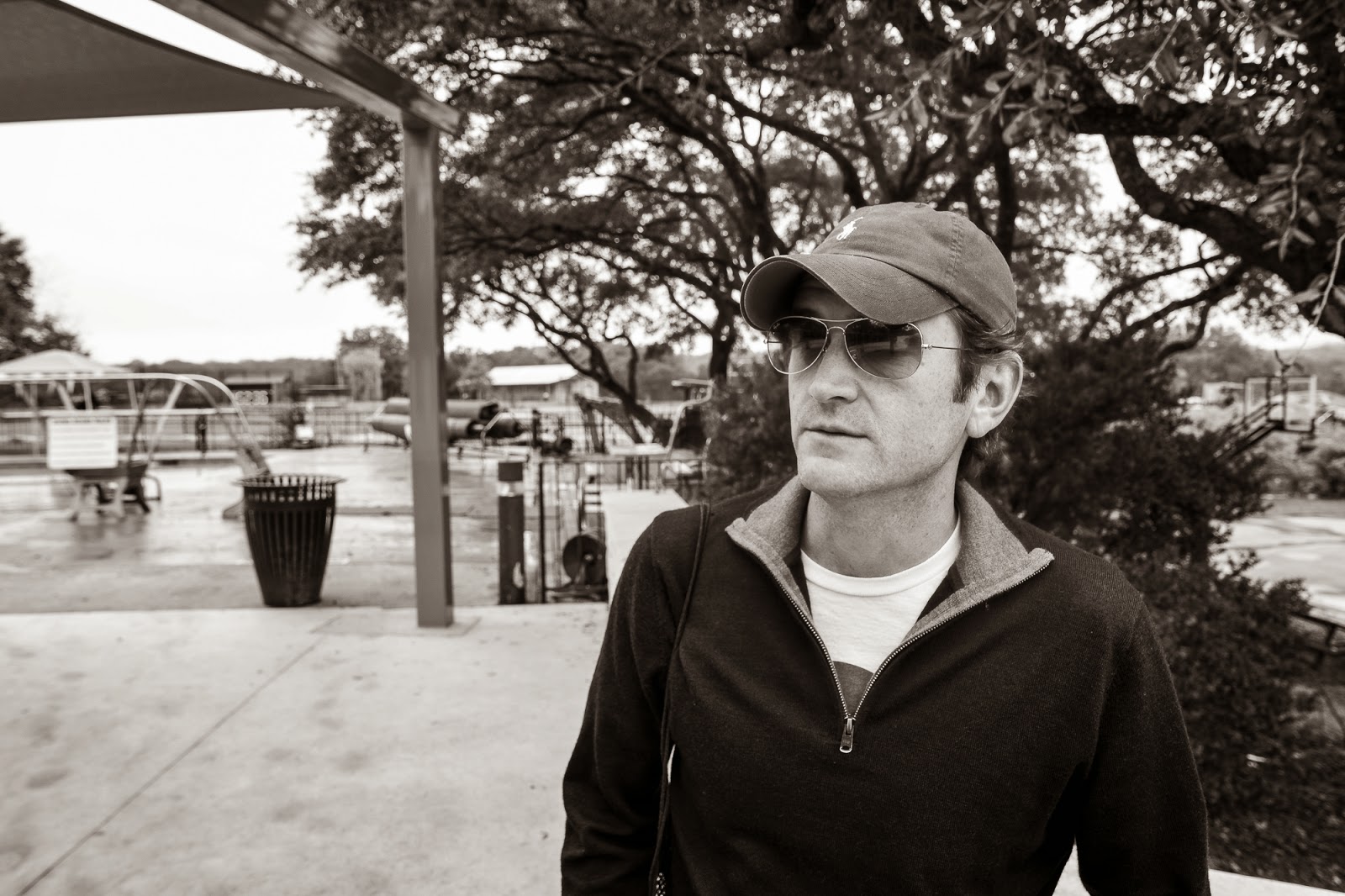 My friend, Ross, at the pool just before noon workout. I thought I'd switch to black and white to neutralize the effect that color has on our subjective appraisals of sharpness and contrast. Shot wide open on a gloomy day and you can see the limited depth of field as you look at the background objects. 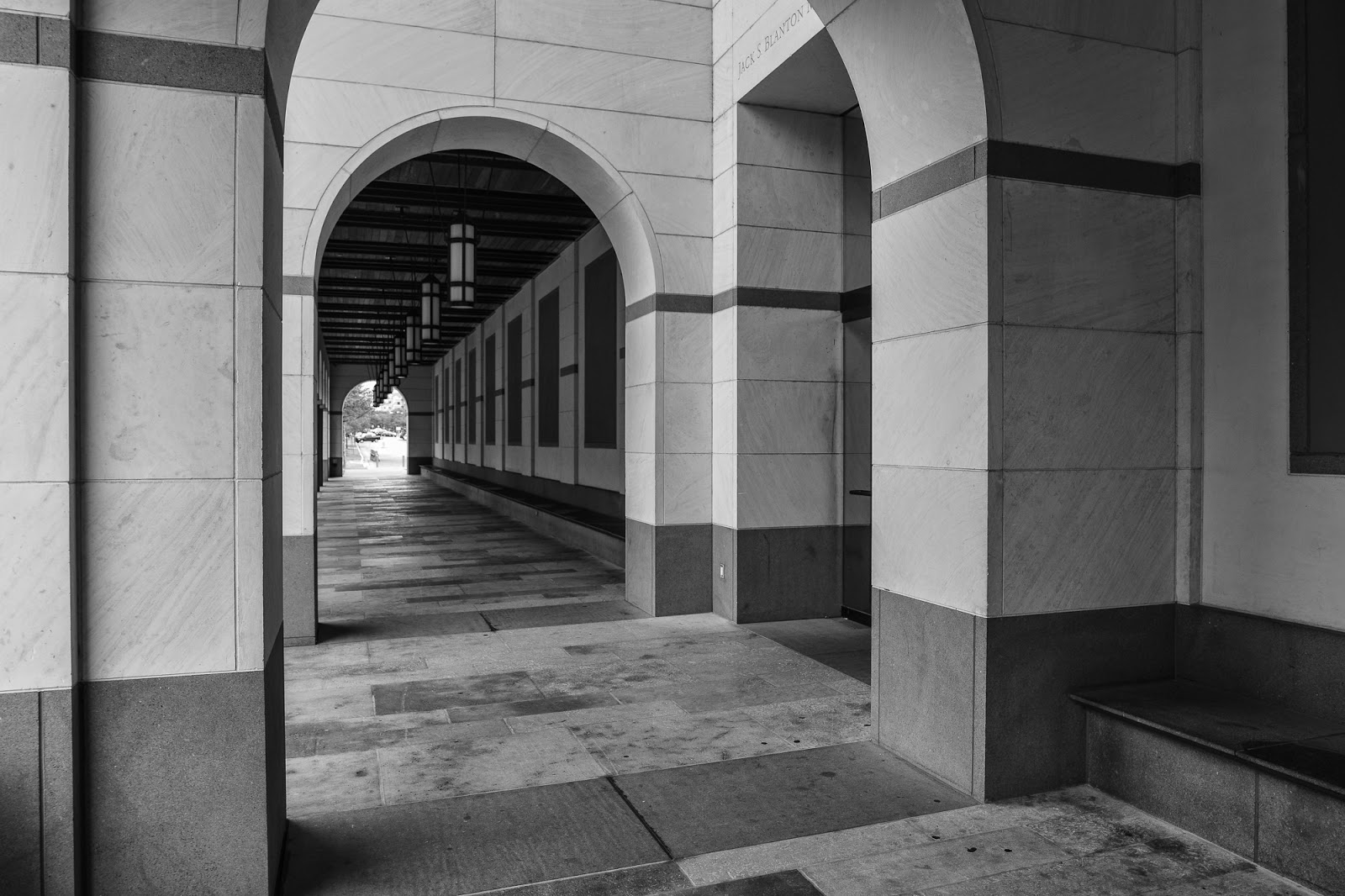 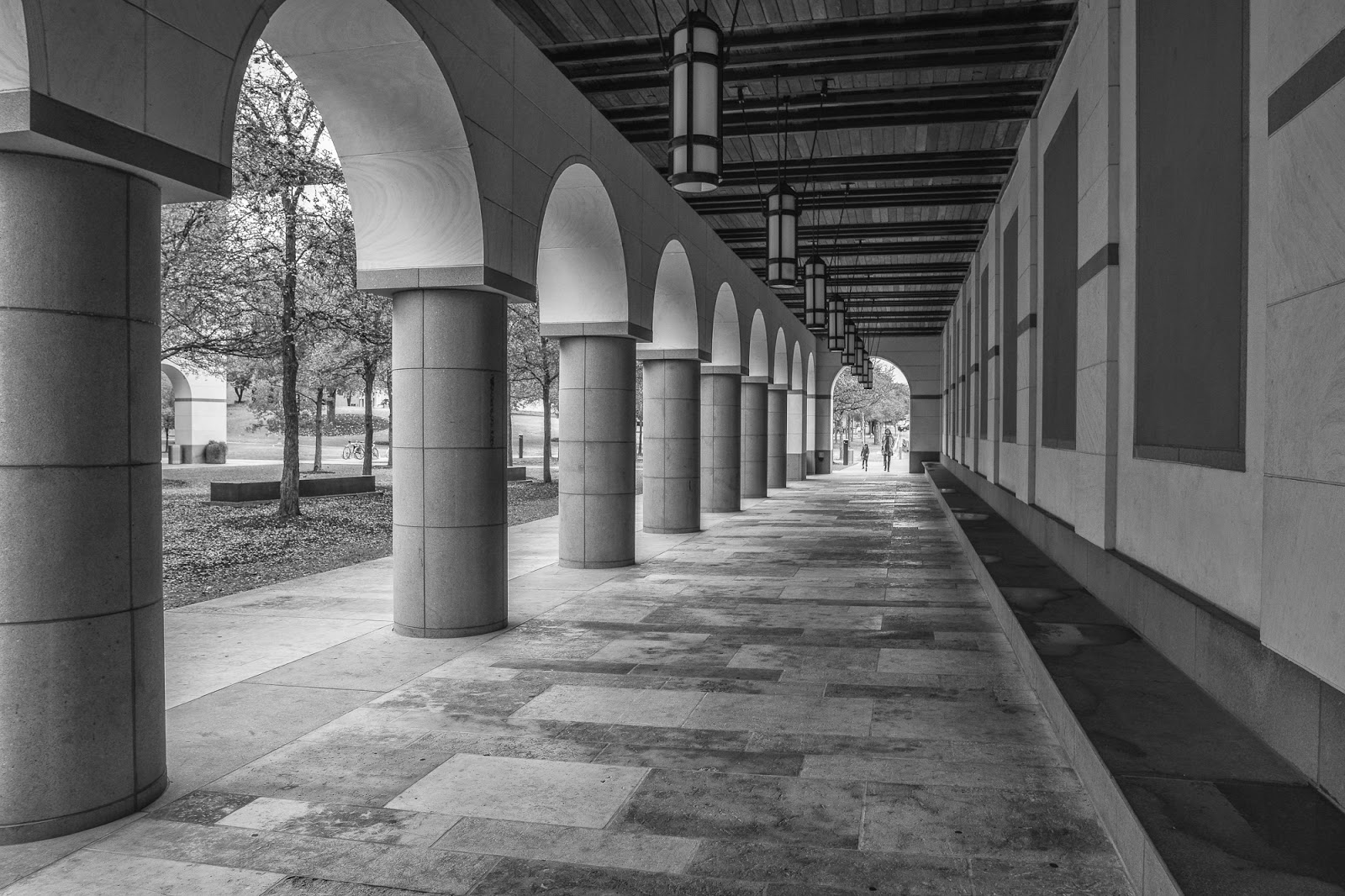 This is a look down the walk way in front of the Blanton Museum. I find the lens and the huge depth of field at f5.6 to be amazing. At the very end of the frame is a mom and a small, young girl who are heading to the museum. I thought it would be interesting to go more than 100% and see how the lens handles blow-ups and detail. See below for a small part from the image above... 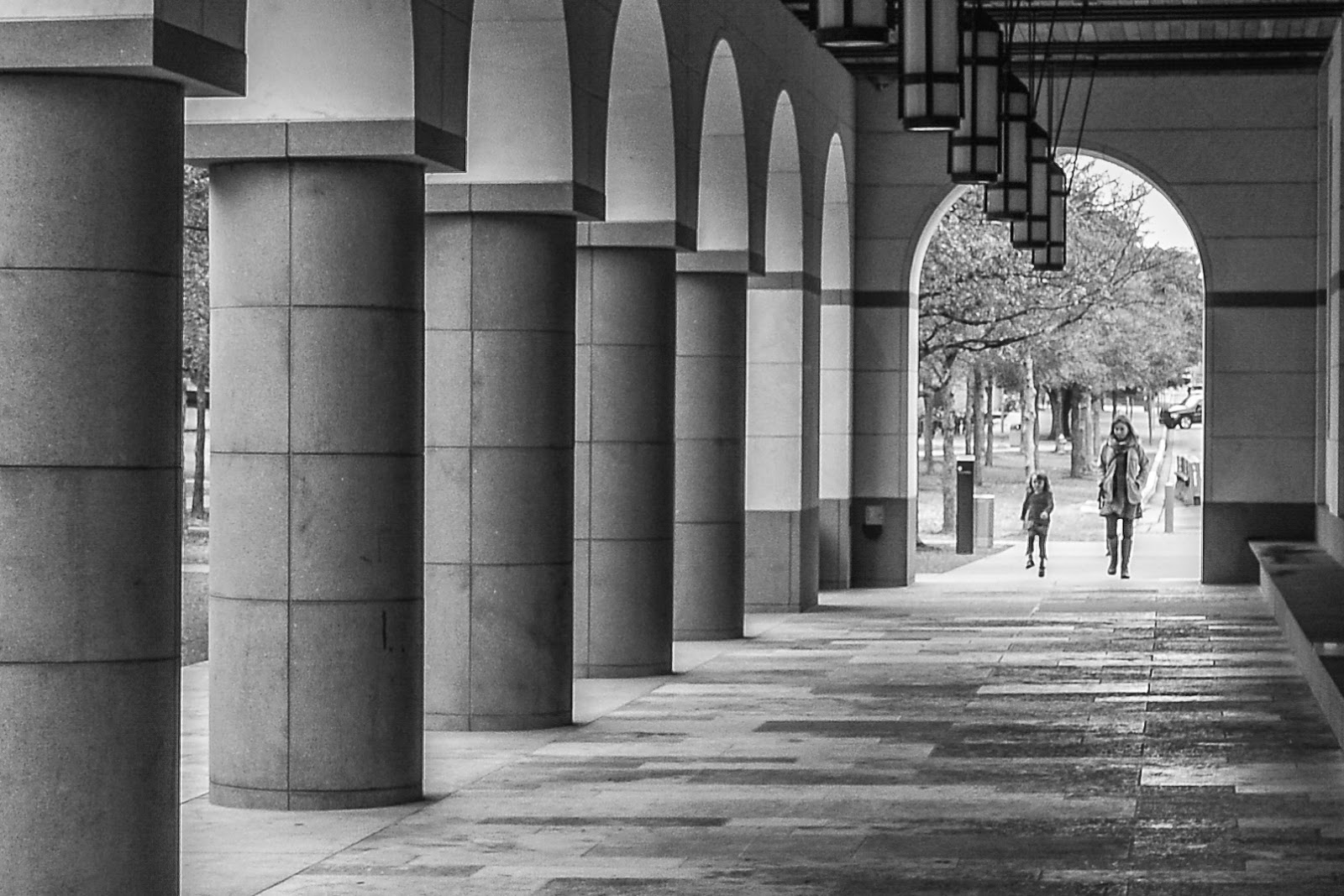 I think the response of the lens and the camera sensor is pretty amazing and I can only imagine how much better it might have been had I had the camera securely attached to a stout tripod. Again, at 100% the sharpness is very, very convincing. 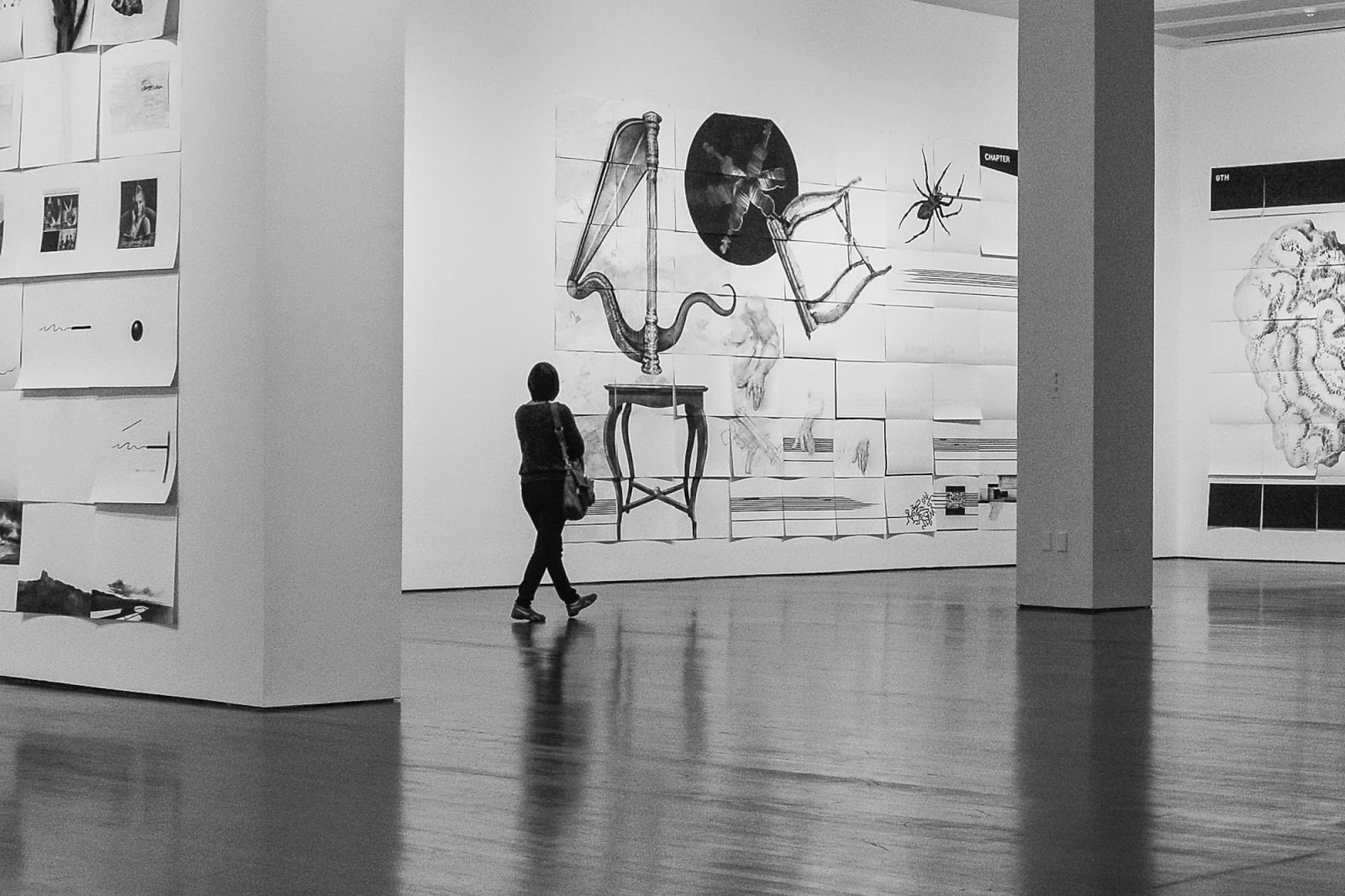 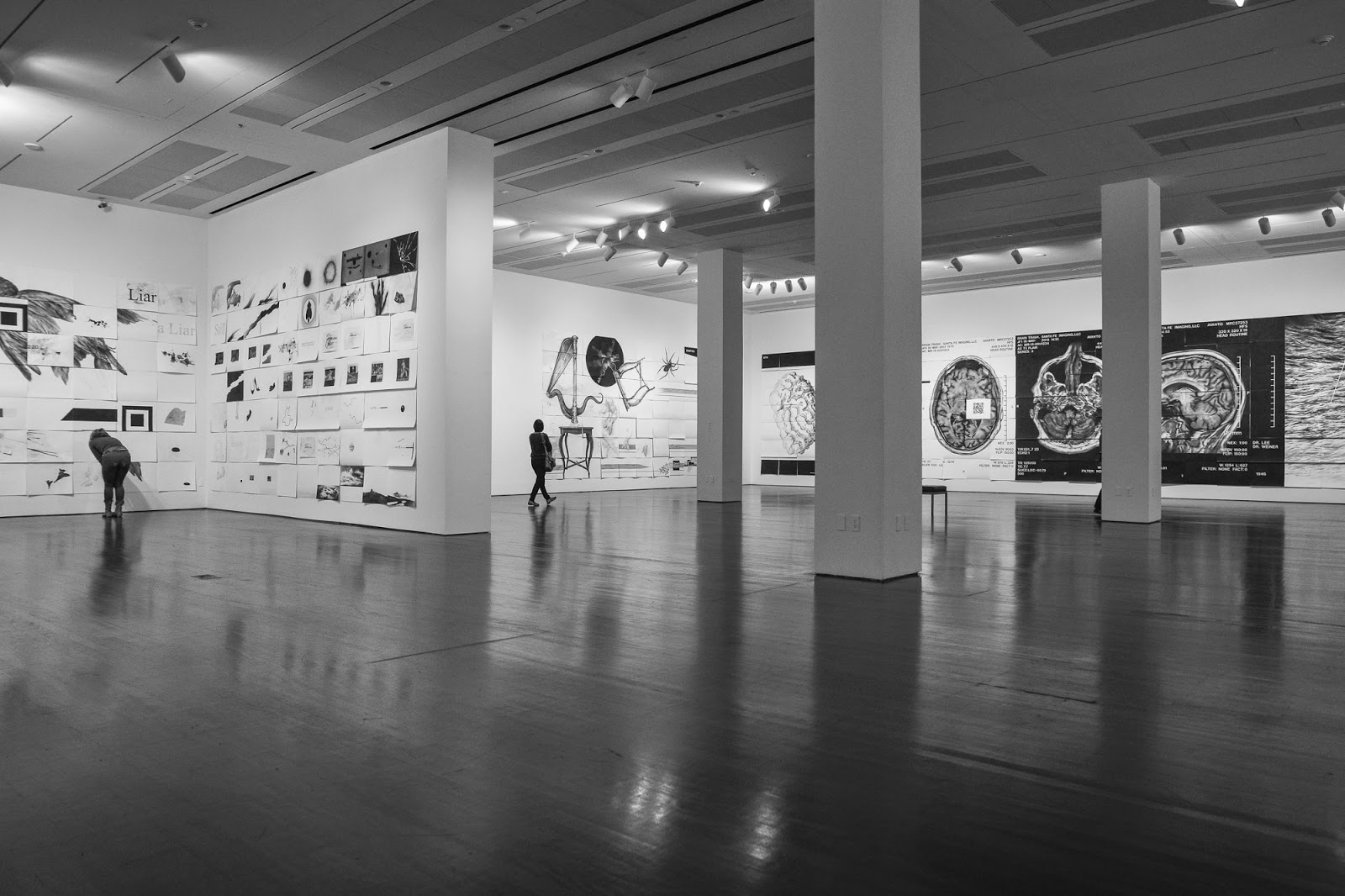 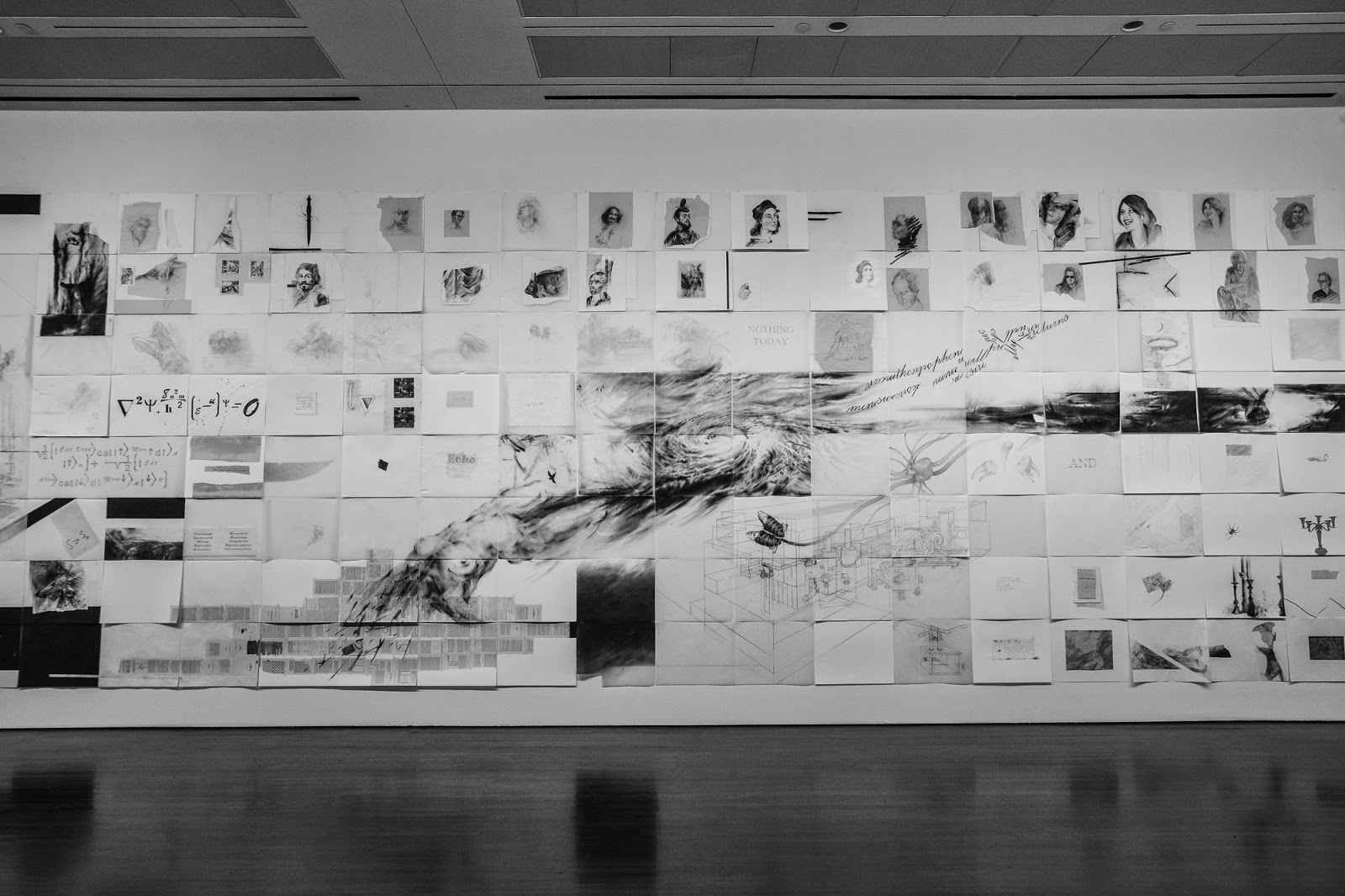 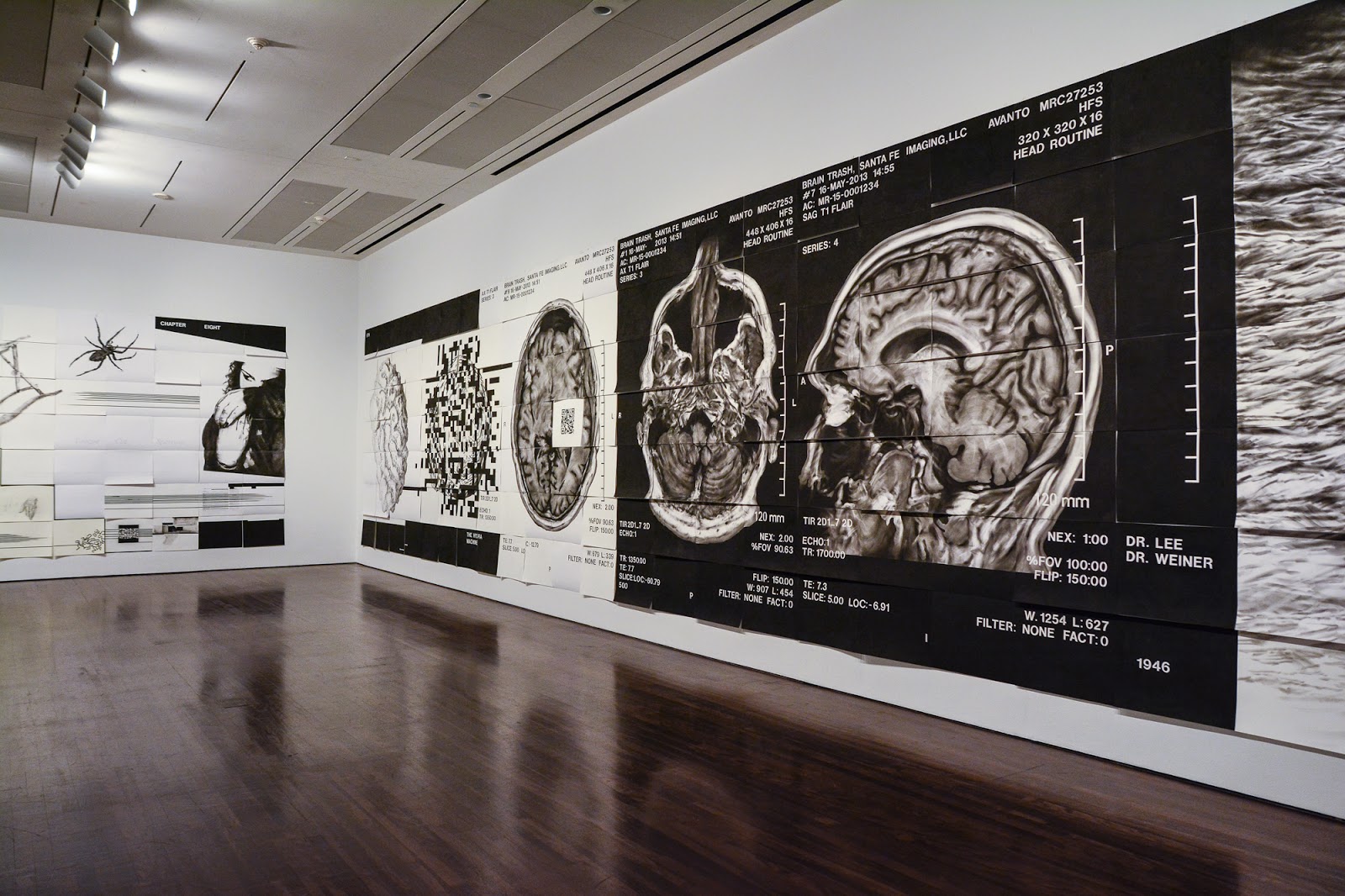 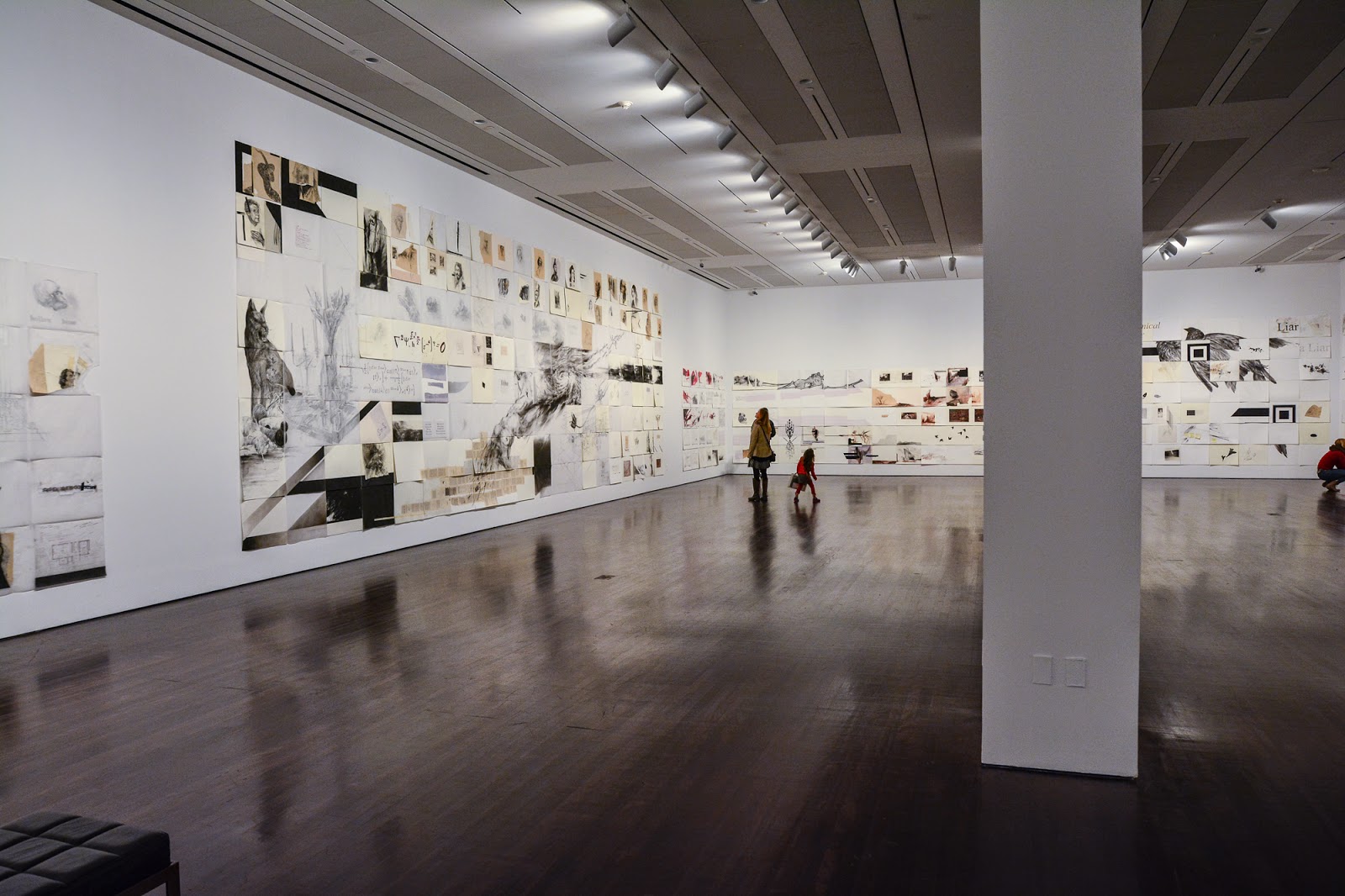 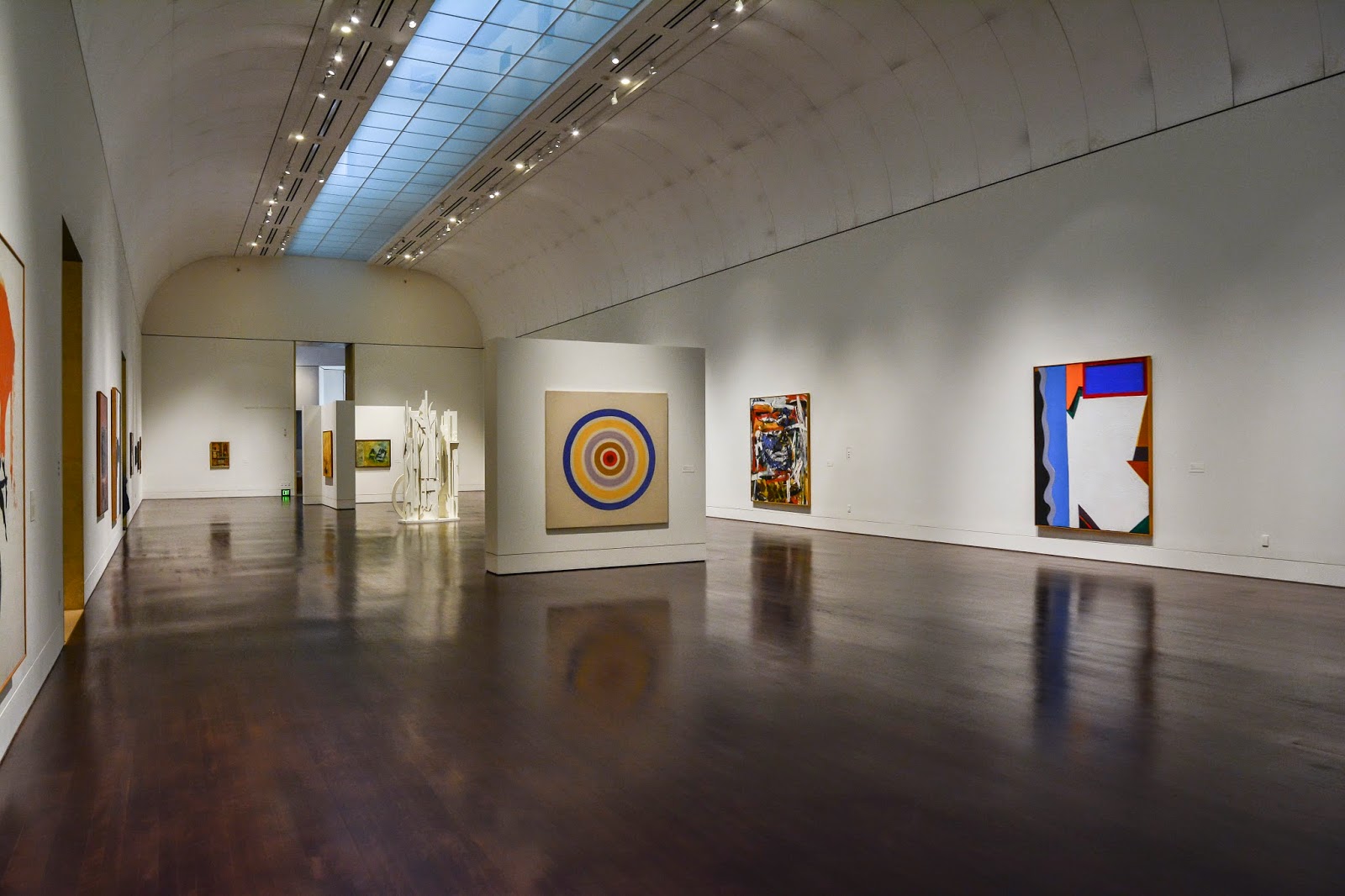 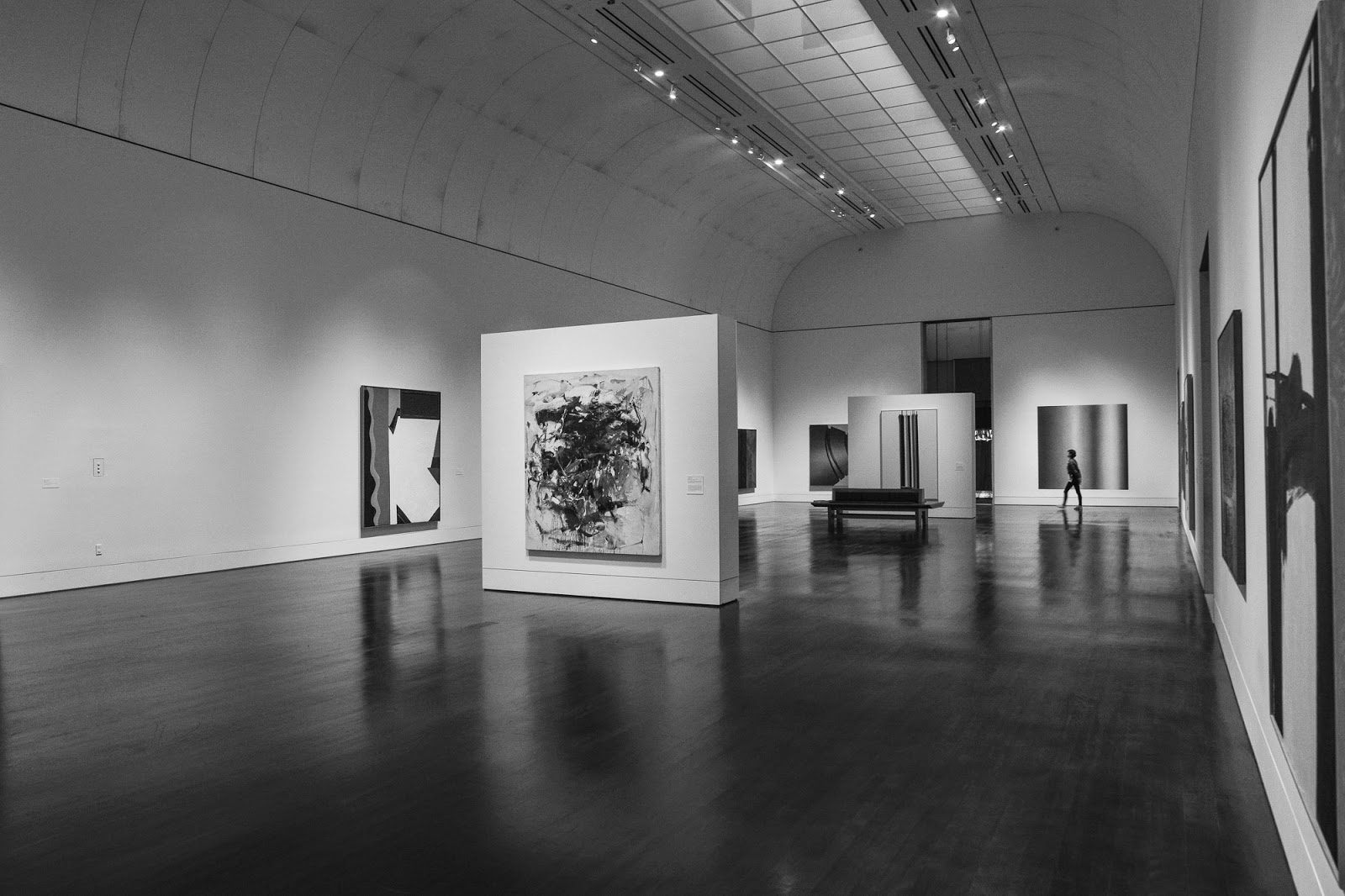 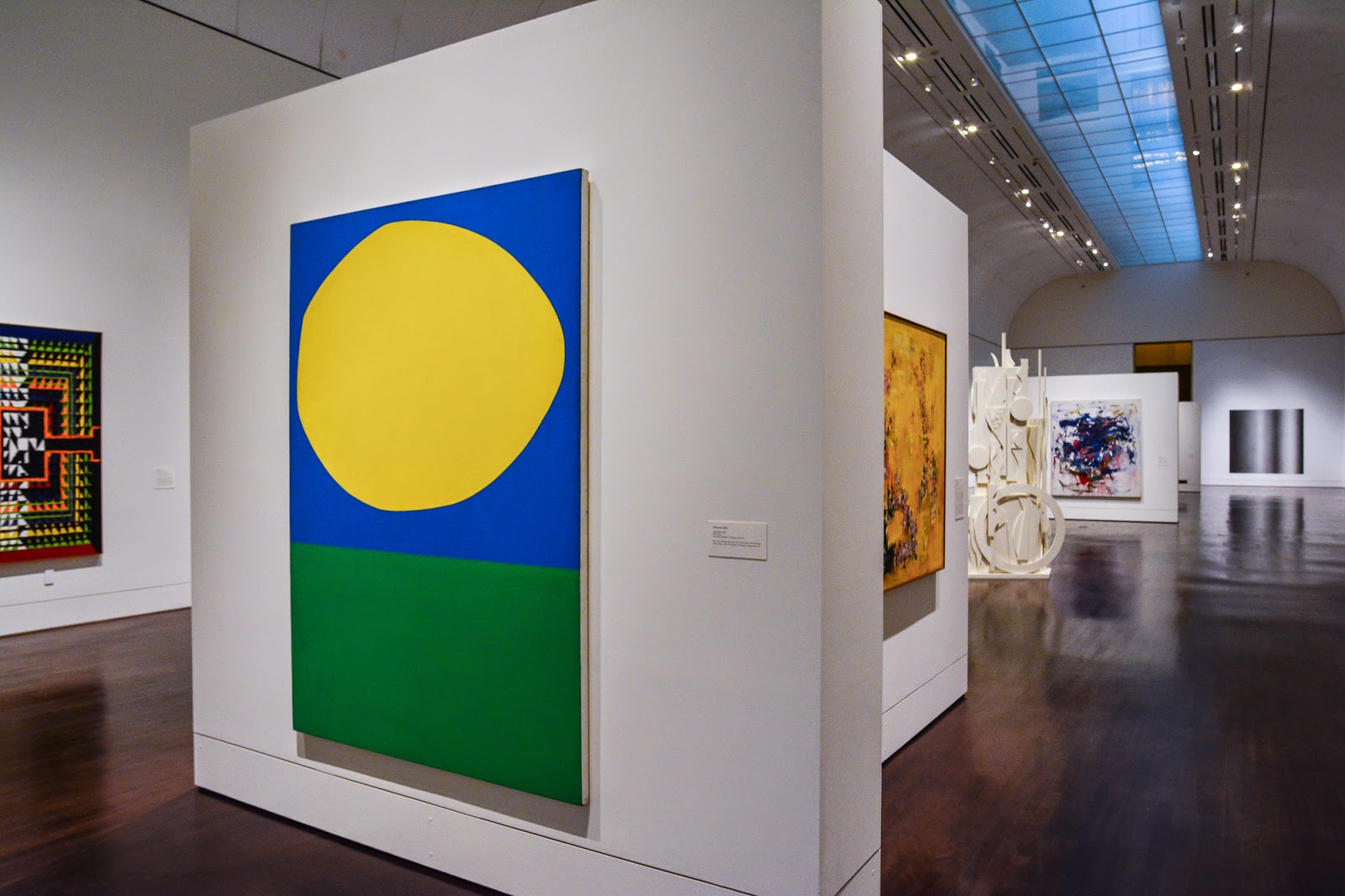 Below are two interesting tests. On one hand I wanted to see just how much I could open up a severely underexposed frame from the D7100 before experiencing banding or objectionable noise. I was able to bring the image up directly below by 2.5 stops to create the image just below it. An amazing feat, and indicative of just how far digital cameras have come, and how close we are to seriously "good enough" technology that serves to stave off the rhythmic buying of ever newer products. 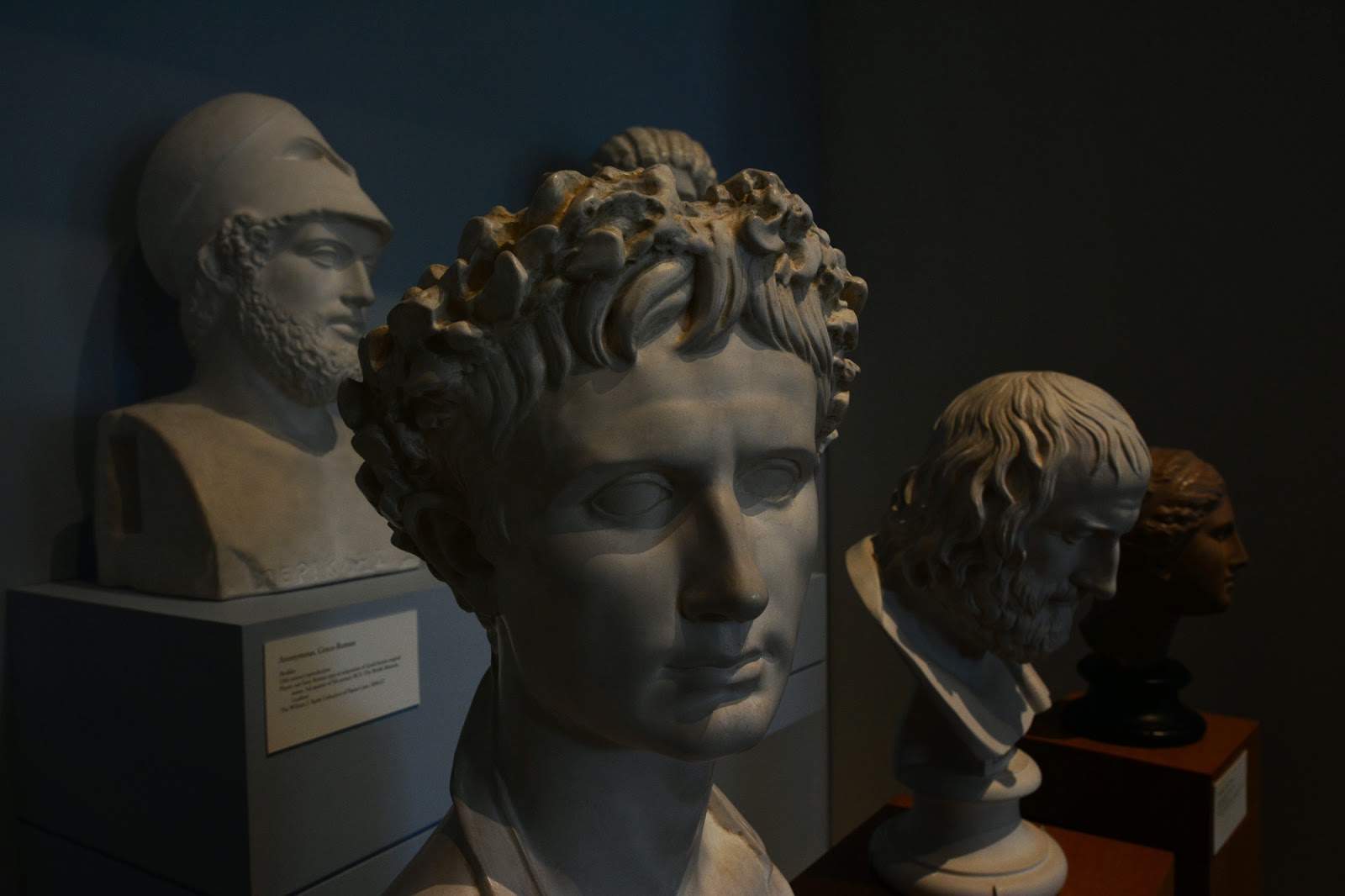 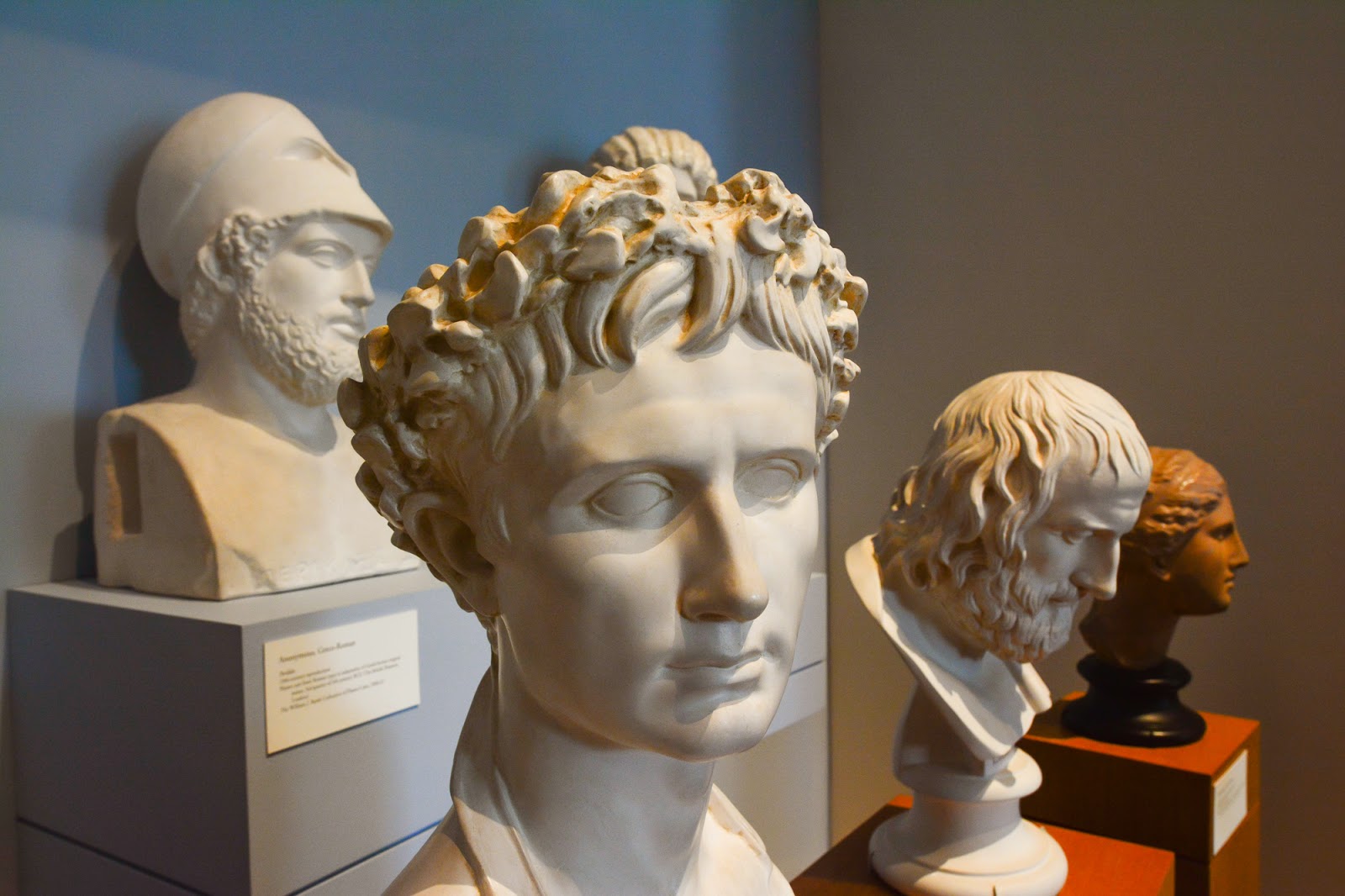 The frames just above and just below were shot at the widest aperture of the lens and an ISO of 800 in a dim room. I was really getting premium practice in hand holding a camera and lens at between 1/15th and 1/25th of a second. Nice to know I can still manage a few sharp frames.... 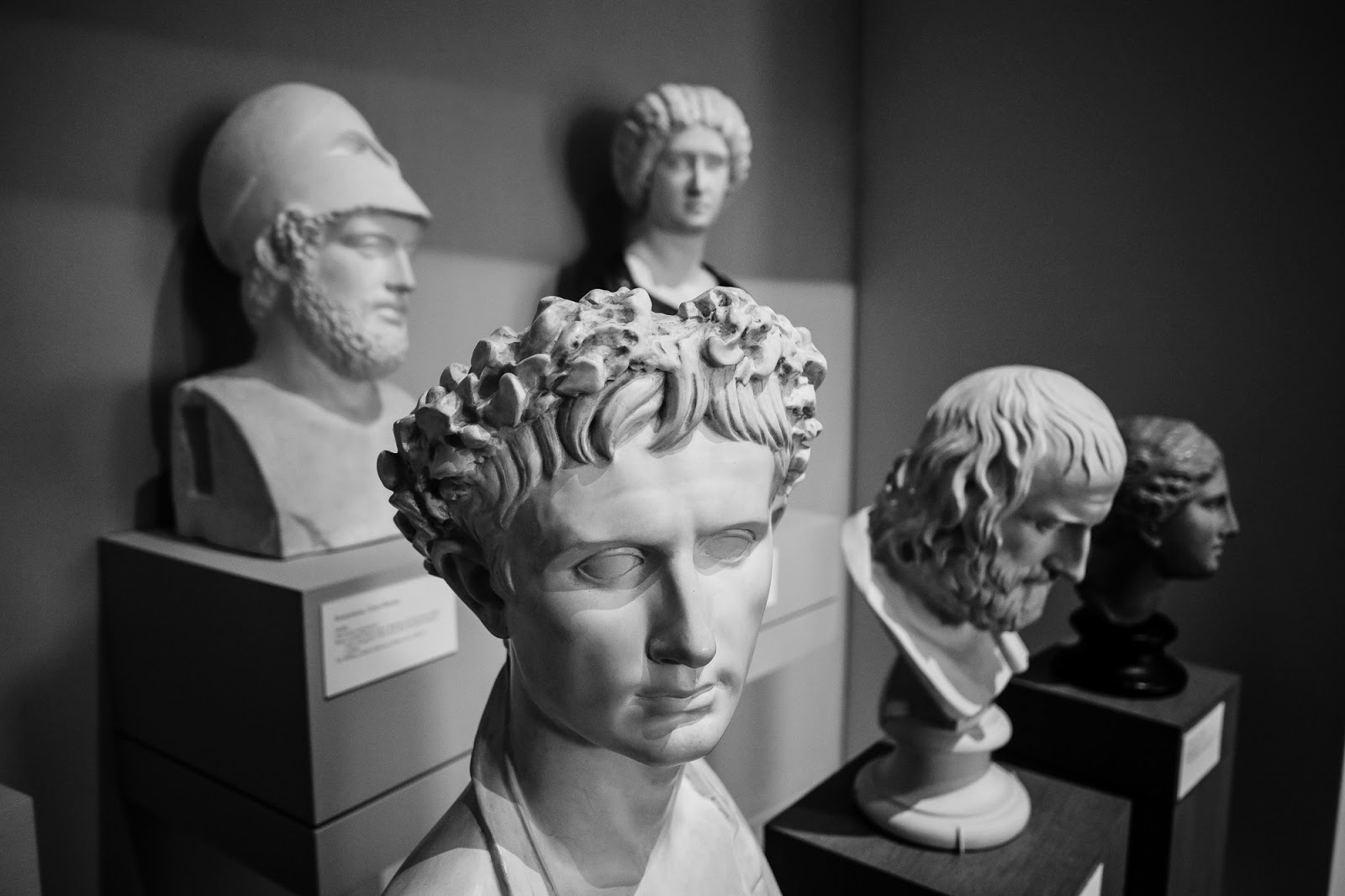 Since I love the Battle Collection of statues I spent some time photographing the heads. I switched to the monochrome setting and tried to use the lens to its highest purpose: Images with enormous feeling of depth. That calls for one to get as close as possible to the primary subject. While I don't shoot this way often I was really feeling it today and I love the effect in the black and white image of the heads just above. Be sure to click in--- the eye closest to the camera really is quite sharp. 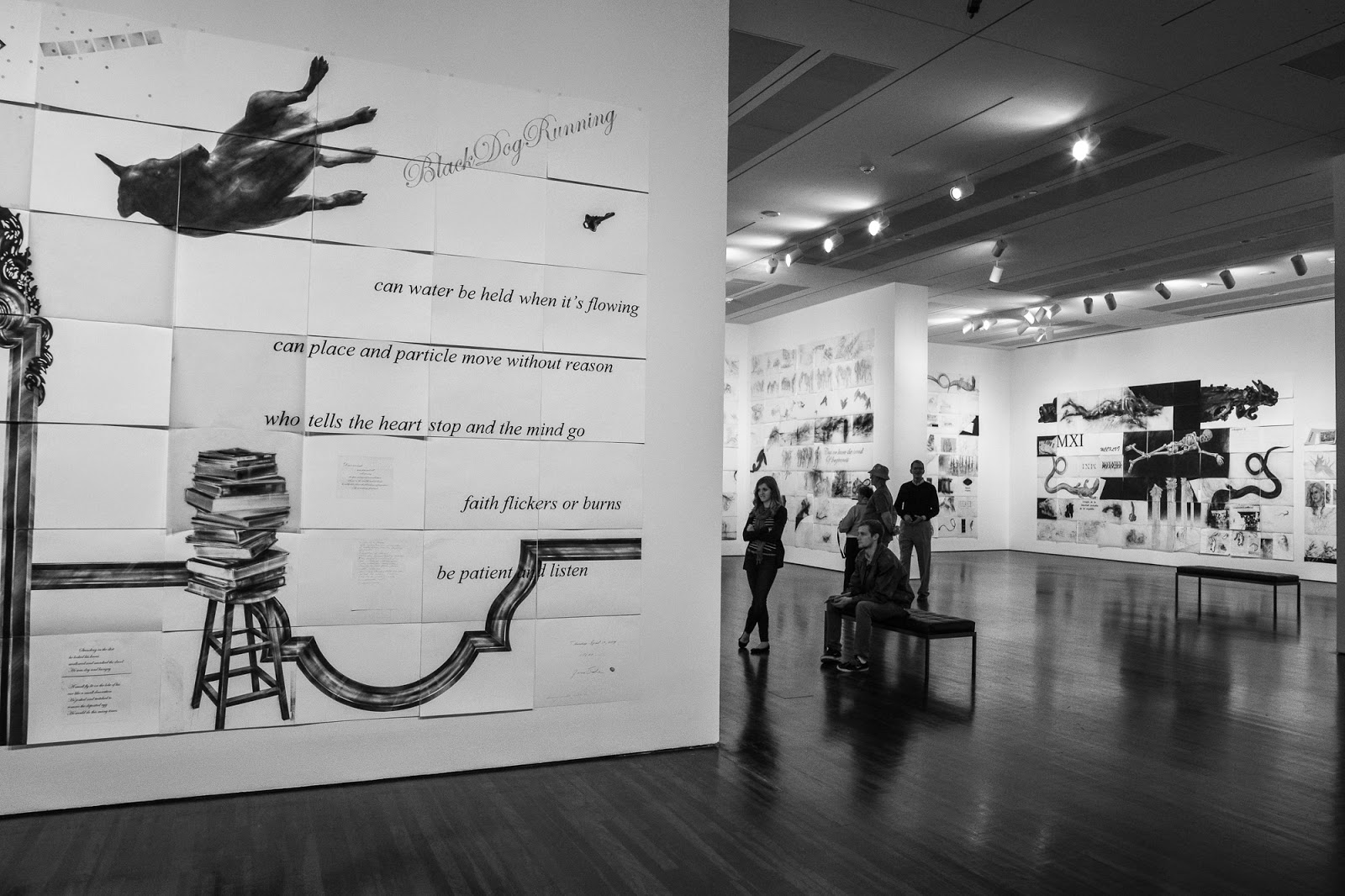 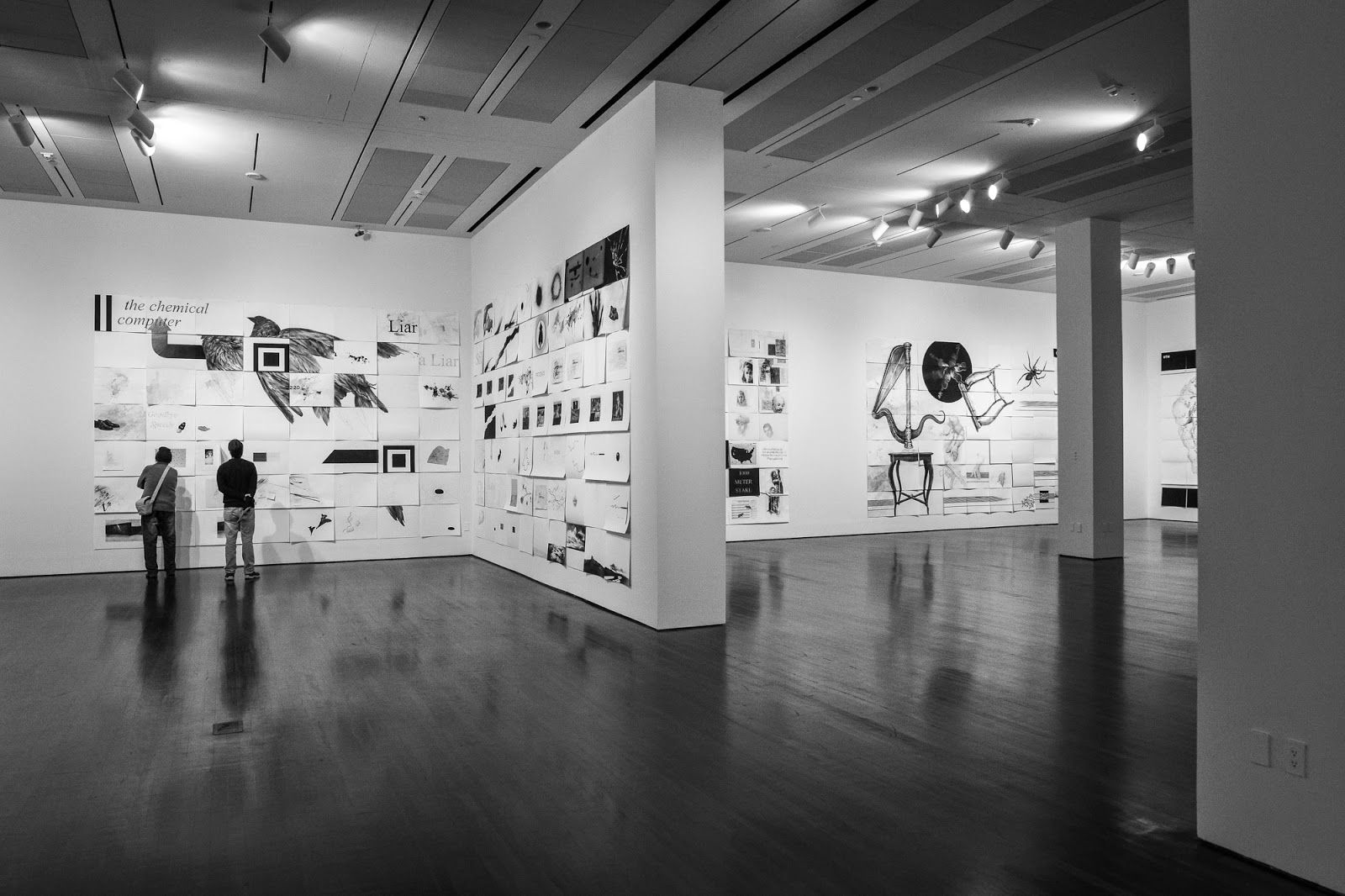 After I exhausted my targets at the Blanton Museum I went across the street to the Bob Bullock Texas State History Museum and tried my luck with an airplane engine. Below I have two versions. The top image is shot wide open at f2.0. Where it is in focus it is critically sharp.

I then did the same basic shot but with the lens stopped down to f5.6 and I am still amazed at how sharp and satisfying this lens is. 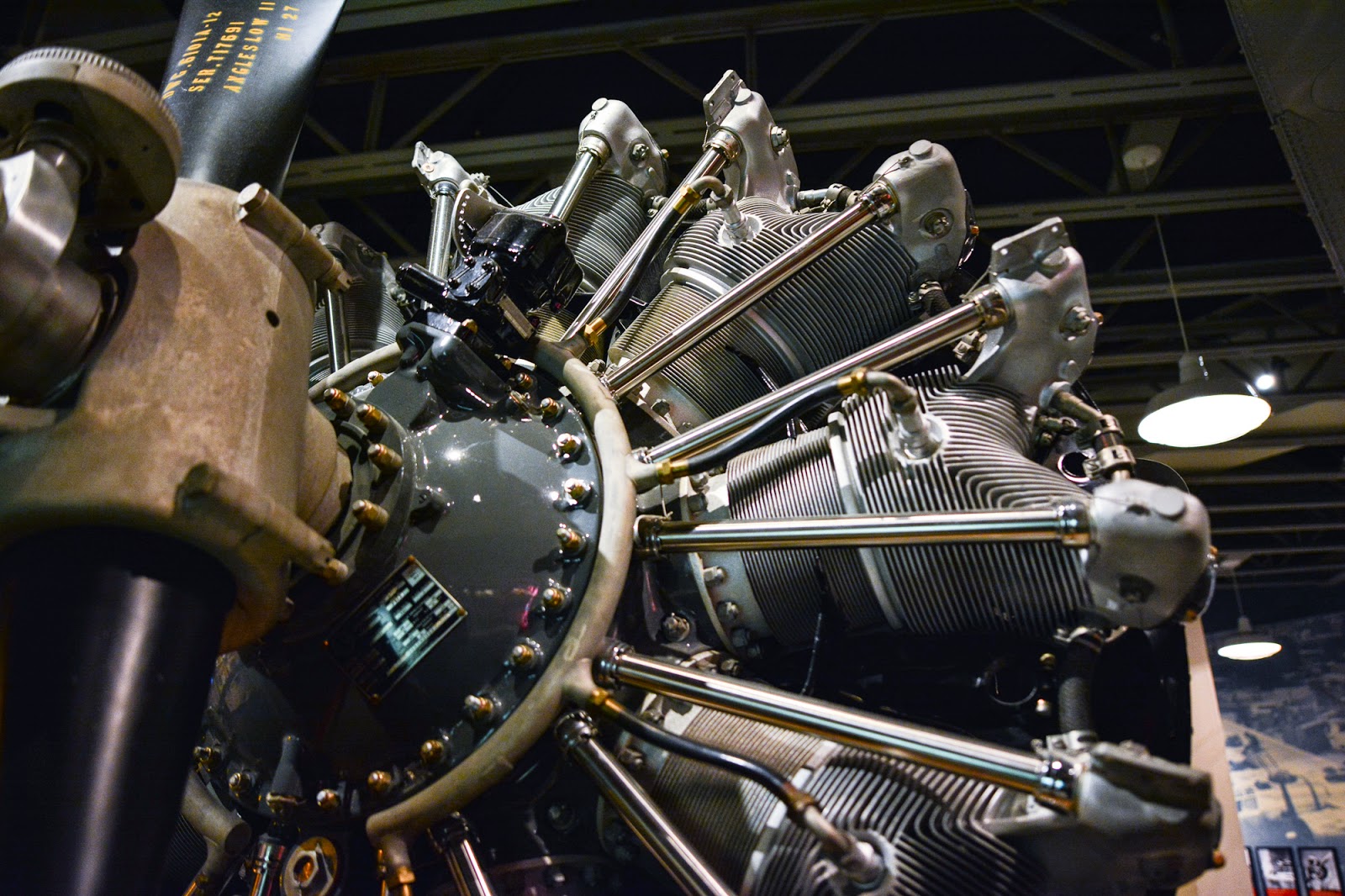 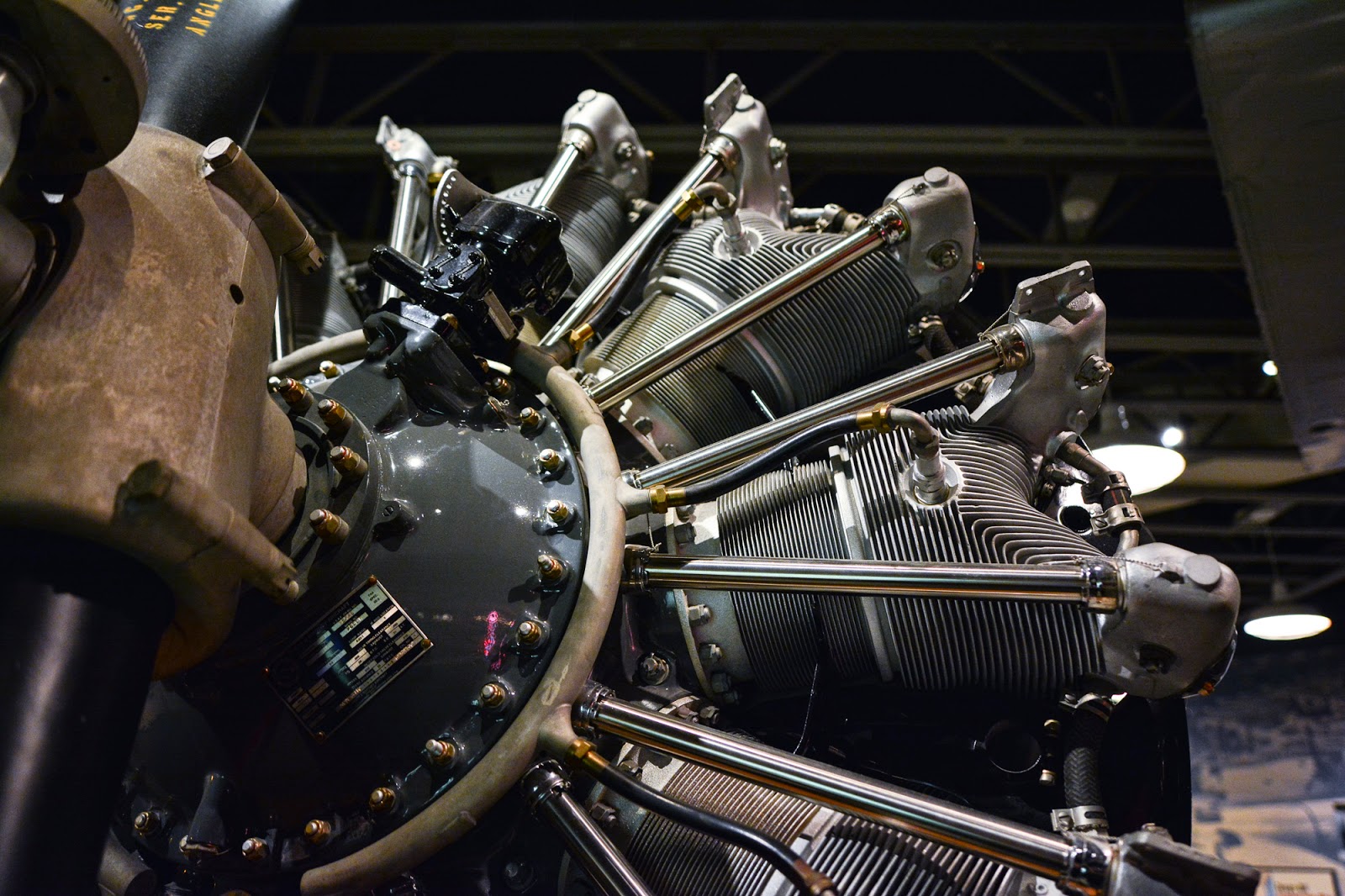 Hand held and shot at f5.6, brace against a railing.
And, of course, let's zoom in on the same frame and see the real details..... 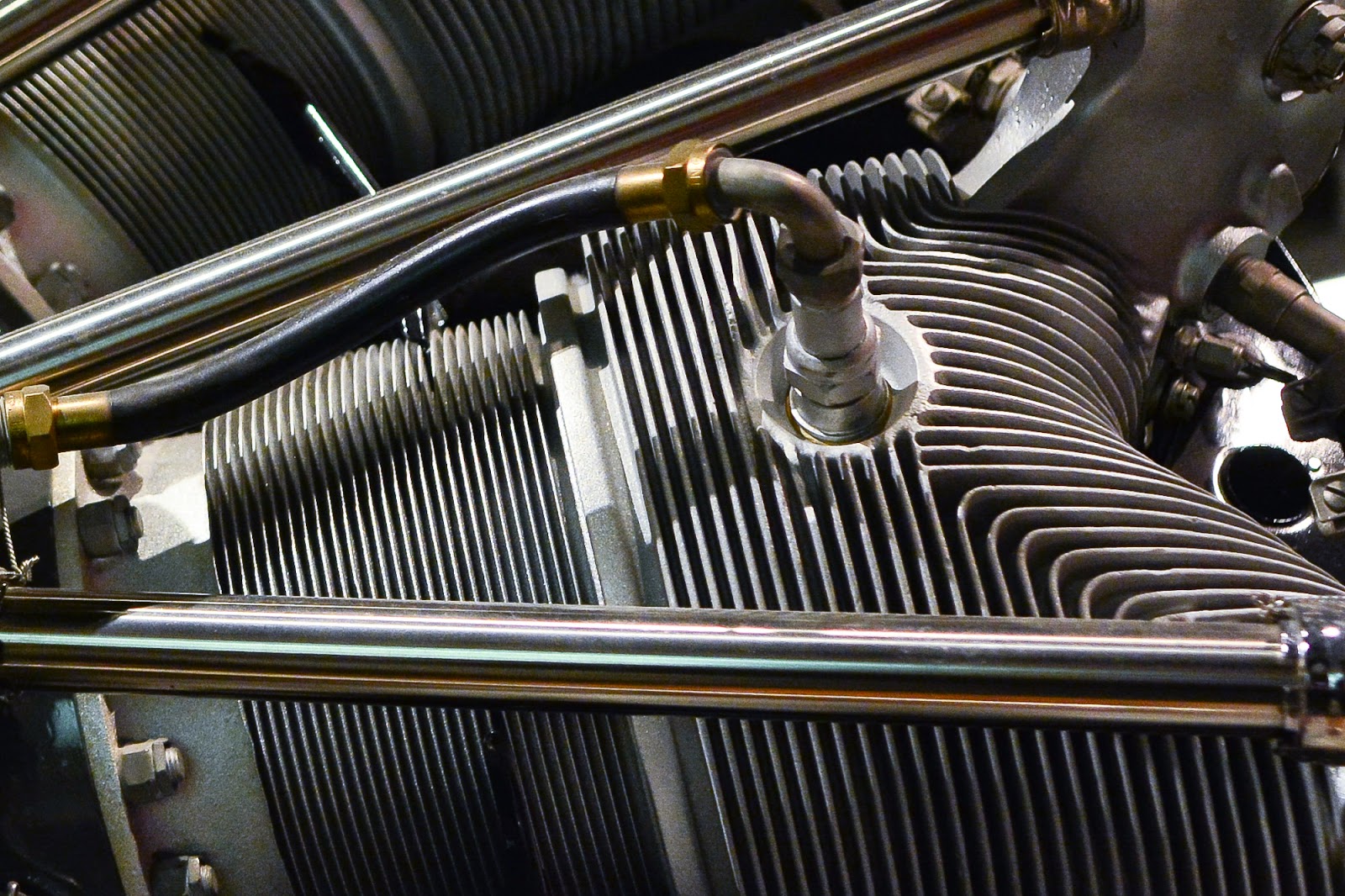 A crop of the image one above the image just above. Sharp enough for me any day of the week.

In the end what do I really have here? It's a trade off, of course. The lens is slow to focus and you have to have your technique down to get a sharply focused open aperture frame. Live view is your friend with any fast, wide optic. For around $300 I'm getting a razor sharp, eye slashing acutance and a nice, wide frame that seems to have been designed to be just right on an APS-C camera. I love the lens. It's great and I'll keep it in the bag along with its 14mm brother that I replaced this Summer with a Nikon mount version. The 16mm is a stunning lens for the price and I can hardly wait to press it into service at my very next architectural or lifestyle-ly shoot. For $300 it's a classic bargain. And it makes me really curious about Rokinon's new 50mm t1.5 Cine lens in the Nikon mount. Everyone here should know that I'm a real sucker for 50mm lenses. Especially fast and sharp ones. 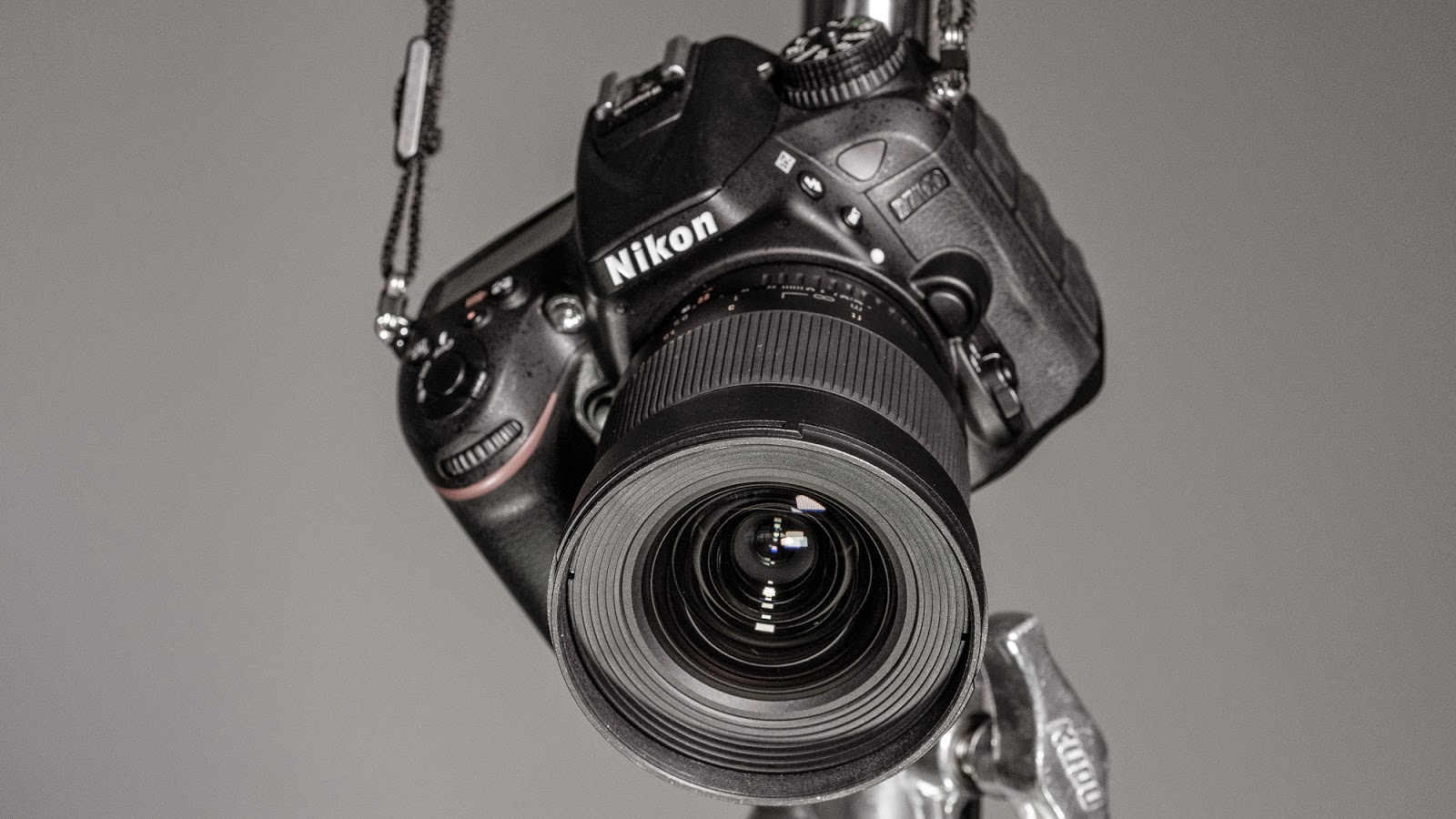 Added the next day.  While I lay in bed this morning I had the idea to try this lens on a totally different camera from a different system so I grabbed the Panasonic GH4, along with a converter/adapter and put the Rokinon 16mm (Nikon mount) on the camera. Now we're peddling in the right gear! The lens is a 32mm equivalent with a fast aperture and the EVF+focus peaking makes operation and viewing an absolute joy. Now I'm able to use this lens in a quick, snapshot mode, with impunity and immunity from mis-focus. Is it sharp enough for m4:3? We'll look closely at some tests but I'm already thinking yes, just based on reviewing a few test shots on the nice rear screen of the GH4. Much better handling situation that any MF lens on just about any non-EVF camera. KT

Posted by Kirk, Photographer/Writer at 21:22 8 comments: