Shooting a live performance of the "David Bowie Project 2" performance with a full house of ticket buyers. Stealth? 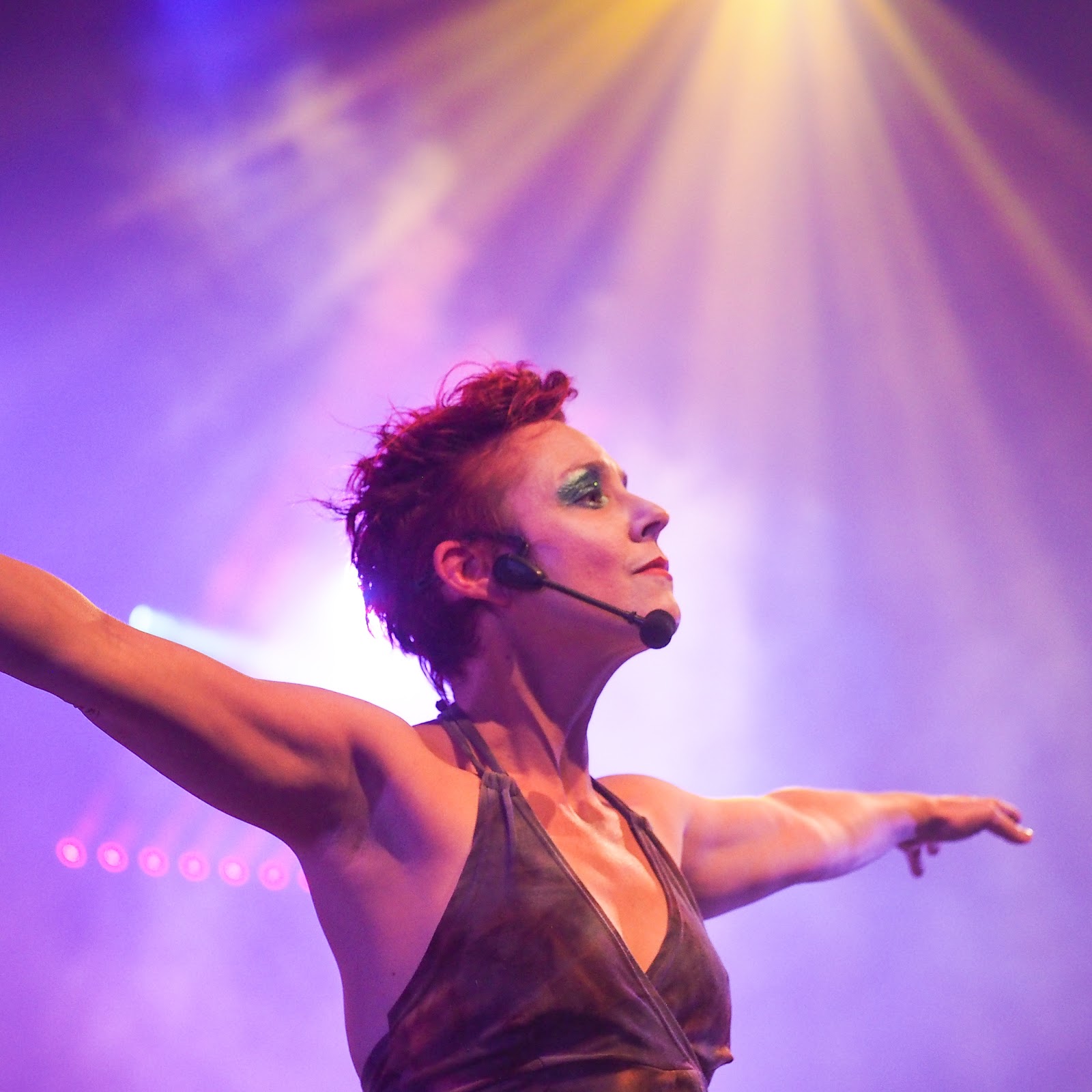 Yesterday I posted a bunch of black and white images from the Ariel Dance Company's latest work, The David Bowie Project 2.  This is not a traditional play but a multimedia performance piece that combines modern dance, dramatic dialogue, live music and light painting. The Company calls what they are doing, "sound painting" but I think it is more than that.

Each performance runs 70 minutes and each performance is different. Three people from the company take turns using a sophisticated sign language to cue different music, sound effects and movement. The piece is loosely wrapped around the various dialogs of David Bowie and interspersed with his music and actor delivered quotes attributed to Bowie.

On the first night, the final rehearsal, I was feeling my way through the piece trying to figure out where to be during each part of the performance. I shot 1200 images between the big Nikon D610 and the tiny Olympus EM-5. I shot the EM-5 entirely in monotone and my experience with it reminded me of what a great shooting tool those smaller cameras could be. Especially small cameras with unmatched image stabilization.

When I went back again last night I packed only the Olympus mini-cams. I took a small Tenba photo backpack housing three EM-5 bodies. I stripped down the bodies so that they were unencumbered with battery grips. I brought one lens for each body. The lenses were the 17mm Olympus f1.8, the Sigma 30mm 2.8 dn lens and the Sigma 60mm f2.8 dn lens (my current favorite for the m4:3 cameras). That and a few extra batteries comprised my entire shooting inventory.

Since there was a live, paying audience in the house I had to make sure not to call attention to myself or my cameras. Before I left the house I dressed completely in black. Black shoes, black pants and shirt and even a black skullcap to cover my zone 7 silver hair. I was able to shoot from either side of the audience as long as I didn't go past the front row. I could also shoot from the left and right side of the back of the stage. I took care to slow myself down so sudden or quick movement wouldn't catch people's eyes. I also did my best not to make eye contact with either anyone in the audience or the actors.  I didn't worry too much about shutter noise since the music usually masked the noise in all but the quietest moments. At those times I re-upped my gratitude for the EM-5's quiet and low tonal profile shutters.

Since the performance is all about movement and a lot of the moves and choreography were unknowable to me before they happened I broke with my usual style, put the frame rate for the cameras on high and shot tight, fast bursts of action. The auto focus of the cameras had no problems locking on to the dancers even though the stage was well fogged---which always lowers the overall contrast. With the small backpacked stashed behind stage I wore the cameras instead of trying to maneuver with extraneous holders or bags. The body with the long lens always went over the left shoulder while the body with the 30mm went over the right. I wore the body with the 17mm around my neck. In almost every frame I shot wide open (with both Sigmas) and one stop down with the Olympus 17mm. I needed shutter speed more than I needed deep depth of field and I wanted to keep my ISO at 160o or under.

At some point I realized that I could get down near the floor with the articulated finder on the rear and I would be able to capture the rays of light falling on one of the "conductors" in a nice way. Then I remembered that I could also use the square aspect ratio. At that point it all fell into place for me and that's the way I shot for the rest of the performance.

Why didn't I use the Nikon cameras and lenses? I felt like they were too big and with the fog in the atmosphere the benefit of the high resolution would be lost. Why carry a bigger camera with a bigger set of files if the limitation exists under the common denominators of both cameras?  I'd rather work in situations like this with cameras set to manual exposure, using me EVF as a defacto meter. The instant visual feedback loop is a hard (nice) habit to break. (If Canon and Nikon really want to save sales they'd do well to realize that enthusiasts aren't all rushing to mirror-free because of the small size benefit, hordes of us embrace them because the change to EVFs is a paradigm shift that will eventually kill off the OVF cameras. Size differences be damned, it's the feedback loop, stupid).

The combination of the great music and kinetic flow of the dancers pretty much ensured that I was almost totally invisible to the audience (and hopefully to the dancers). I delivered a huge batch of files today and I'm certain that the company will get a ton of them into the hands of the press and event websites before sundown. This is how local art gets marketed.

One last note: I've always been warned away from shooting video with the EM-5. The experts are not happy with the look for the files or the "brittle-ness of the codec" but last night I decided to thrown caution to the wind and see what the video really looked like. I set the camera to 24 fps, 1/50th, f2.8 and blazed away handheld. The I.S. is a revelation for video. It's amazingly smooth. I loved shooting that way and, in situations where it's warranted shooting handheld with the EM-5 could be a great technique. Seems perfectionism can create roadblocks to creative practice. I can hardly wait for the rumored new EM-5 type 2. It's rumored to have tweaked I.S. as well as a really decent video file implementation. Not perfect but perfectly usable. Count me in! 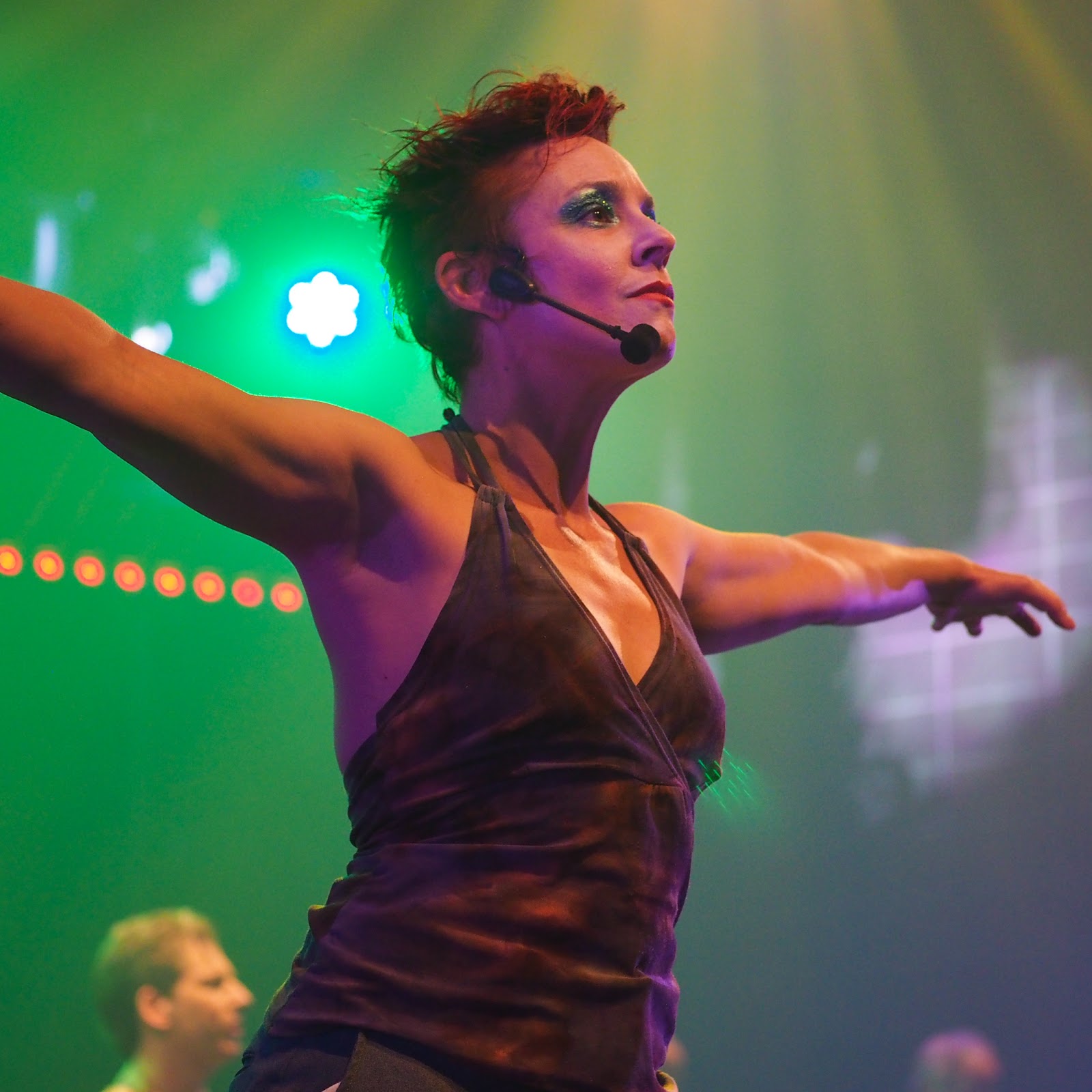 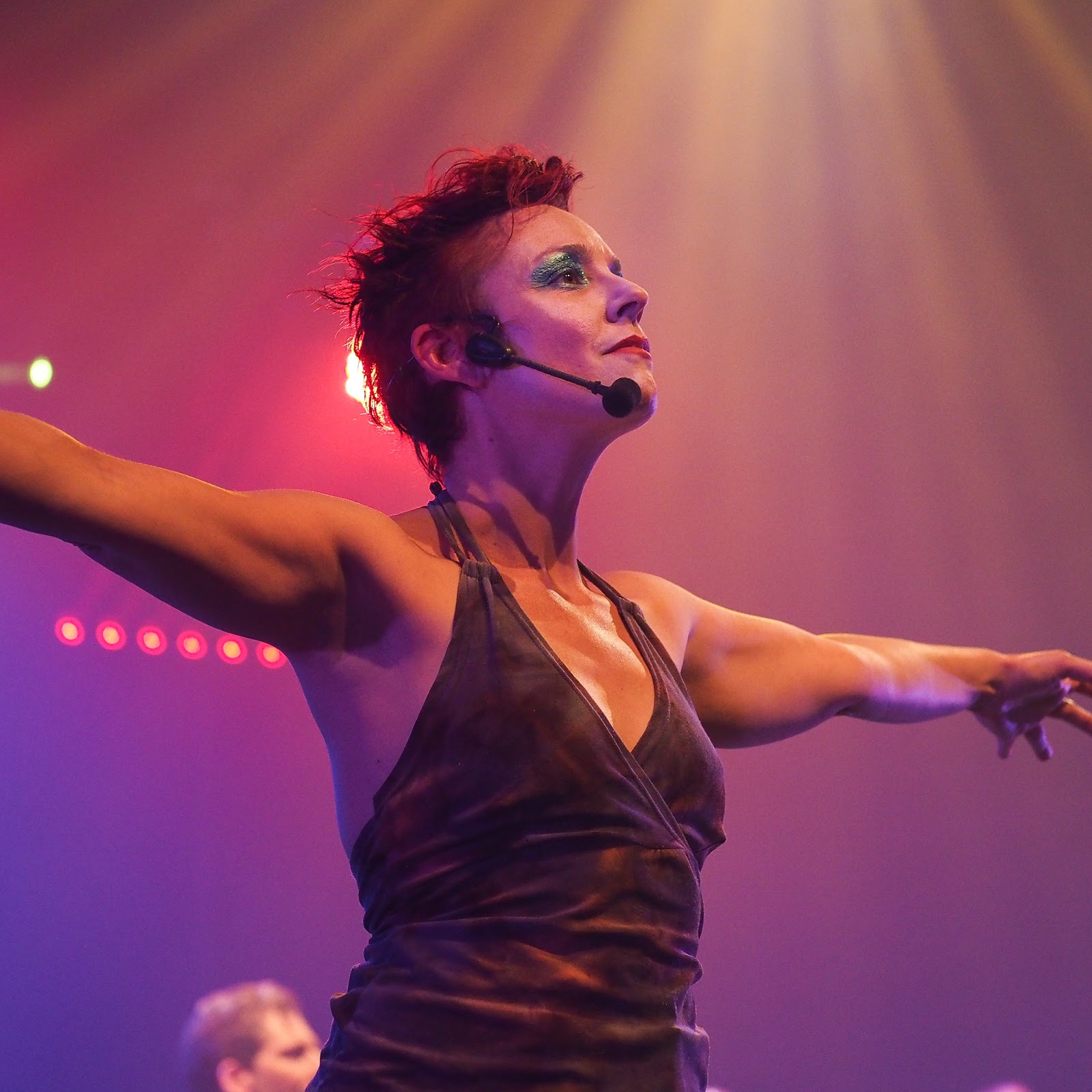 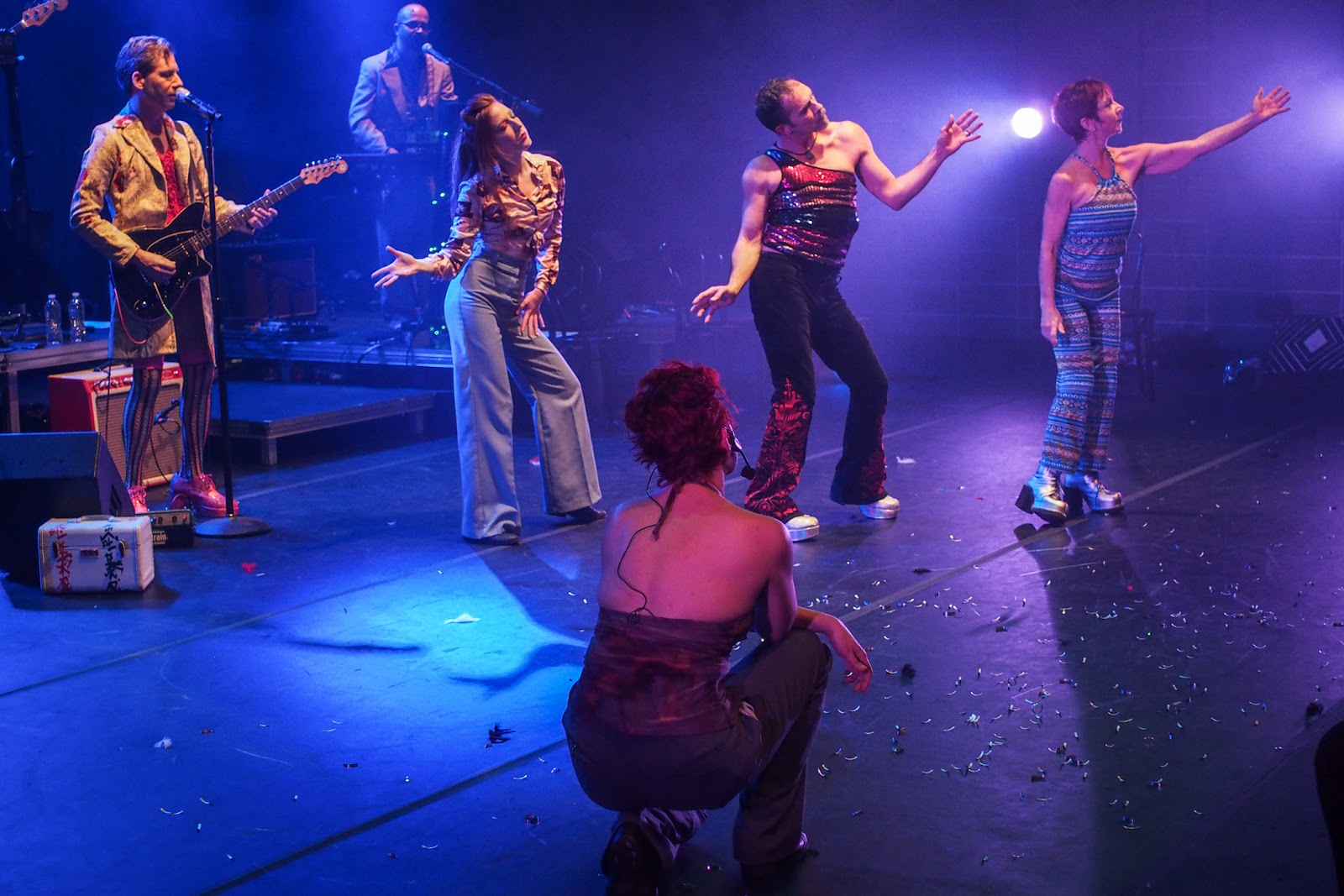 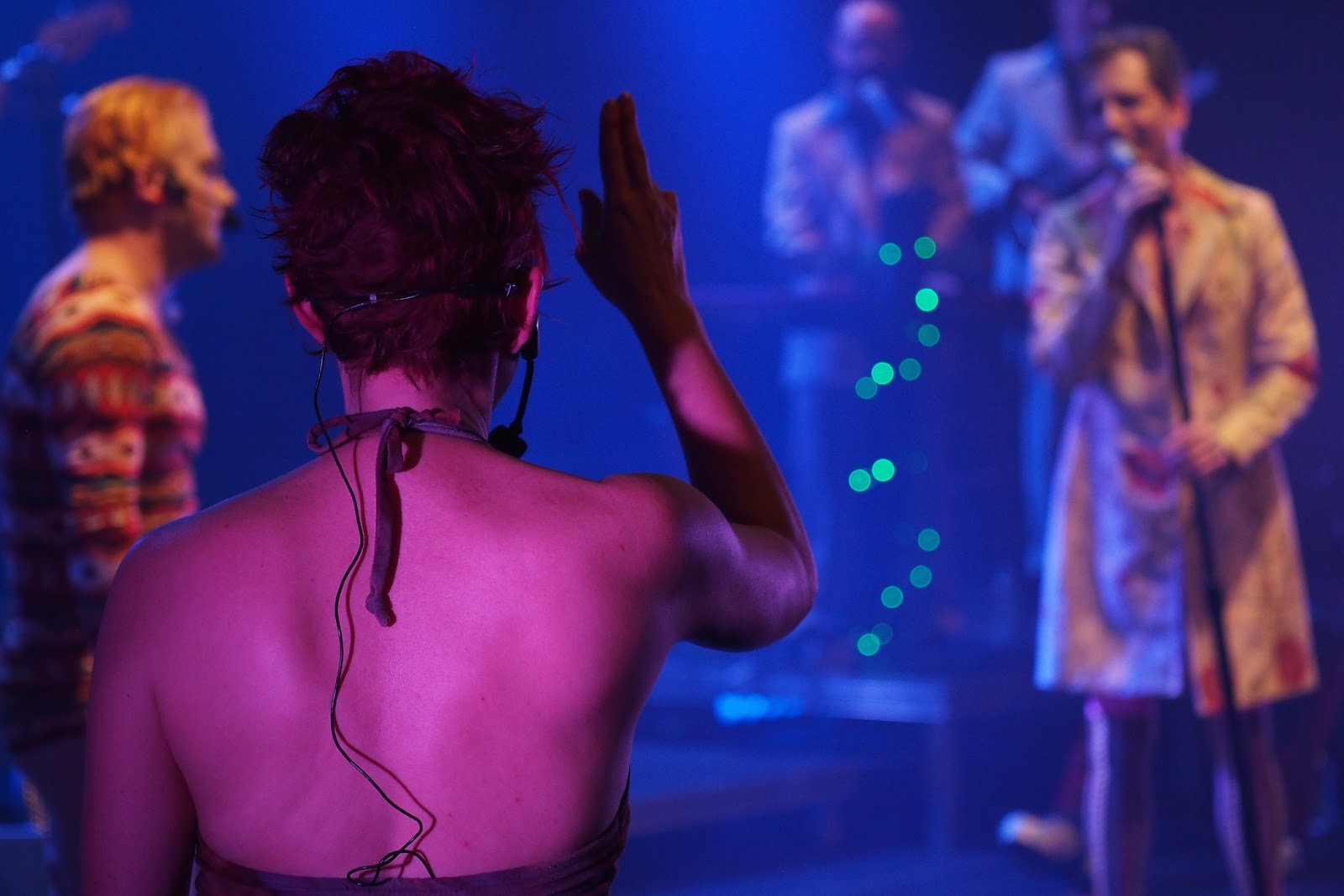 The above is a link to a new EM-5 but if you go to that page you'll
be able to navigate to the used EM-5's offered. They start at just
under $400. Still a bargain the way I see it...

And while you are there deciding that you really do want to take a chance on an older camera model, please pick up a Kindle or Print copy of the Novel to help support VSL's house writer....

Posted by Kirk, Photographer/Writer at 15:55 8 comments: