We're wrapping up a complicated annual report job and I have some observations to make. 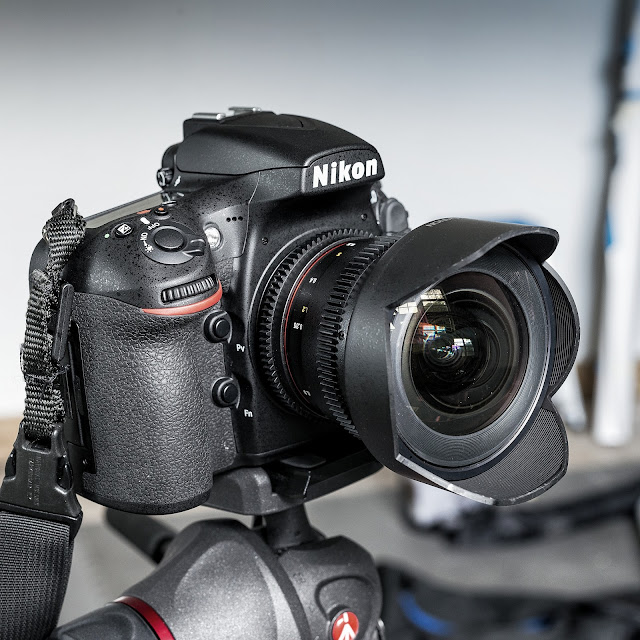 First of all, when you are trying to do a particular look, the right tools really do make a difference.

I'm not saying you can't go out with XYZ camera and, with a lot of work and elbow grease, get a great image with enormous detail but if you want a great image with enormous detail and a wide enough dynamic range to help you tame direct sun you could do a hell of a lot worse than selecting a Nikon D810 for your project. While there might (might) be better cameras to be had in the medium format catalogs or in some secret lab, I've never used a better all around corporate image making machine than this one.

It sneaks up on you. It does all the typical camera stuff while you are out shooting. It has the same screen on the back as other cameras so there's nothing to cue you to the differences. It goes "click" like every camera I've owned. It takes the same lenses as the previous generation of Nikons I've used but the difference is easy to see when you bring the camera home from the field, drop the files into the latest rev of Lightroom CC, and then sit down and start editing.

This thing held on to detail in shiny skin like nothing I've ever used before across film or digital product lines. If you are hell bent on never burning out a highlight again you can set this camera to ISO 64, underexpose by over a full stop and then bring the files back up to a normal exposure setting while protecting your highlights without taking any hit in quality whatsoever. Nothing. No grain, no color shifts. A lot of the current annual report project we are wrapping up was done in direct sun or with direct sun playing over the backgrounds. I worried but I didn't need to (the story of my life...) because nothing I shot was in anyway technically unusable. But the thing that got to me over and over again was the ability to take a full length, standing portrait, zoom in and fill the screen with a face and still not see noise or a lack of sharp detail.

And do I even need to mention how cool it is to have ISO 64 as your base sensitivity? That means you can go to 1/4,000th at f2.0 if you really need to get that skinny depth of field everyone talks about. You even have a stop's worth of shutter speed in reserve. Just like a camera should be.

Look at the lens on the front of the D810. It's a cheap, cheap, cheap Rokinon 14mm f2.8. It vignettes a bit and has wickedly bad "mustache" geometric distortion that makes simple distortion corrections in PhotoShop or Lightroom almost impossible. But the fun thing about this lens is that at f2.8 the center third of the frame is really sharp. Probably sharper than anything else in the focal length. Stop it down to f8.0 and the whole frame is very, very sharp. If you use the lens and the software as it is then you basically are trading straight lines and nice corners for a sharp middle section and that probably convinces most people to stop using the lens after the novelty of its wide angle of view wears off.

I loved the idea of the lens but it was hard to justify using it and giving files to clients if the files had visible and awkward distortion built-in. Clients seem more sensitive to distortion than lower sharpness. But I discovered a custom lens profile made by a guy named, Sven Stork, that can be added to the Adobe lens profile library and basically turns your $300 wide angle novelty lens into a priceless and high performance keeper. And with the D810 you've got more than enough pixels to be able to throw some away during the correction process.

I just finished post processing some abstract images we did in a big electrical substation and one of them has already been earmarked by the art director as a cover shot for their printed annual report. The details are amazing and the color and contrast of the image, after some post processing, is as good as anything I have ever done. The lens is a damn advertisement in my camera bag that constantly "suggests" to me that I load up on Rokinon's other cine lenses. Hello 24mm f1.4?

I used the D810 for almost everything in the entire AR project. I used the 14mm for both of the double-truck spreads that will appear. But that's not the only combination I used.

The Nikon 25-50mm lens got its due in the VSL blog a few days ago and I'm still impressed by just how well the lens makers did their craft in the age before autofocus and plastic barreled lenses became the norm. We've reviewed our older Nikon 80-200mm f2.8 push pull zoom before but an entire section of the AR, mostly shot against the sun also made me appreciate enduring craftsmanship.

The king of the camera bag this week, though, has been the Sigma 50mm f1.4 Art lens. Every time I see how sharp and how three dimensional it can be in its renderings the  more unwilling I am to remove it from the camera. But I'm not going to write about that lens now. I need more time with it to see just how good it can really be. 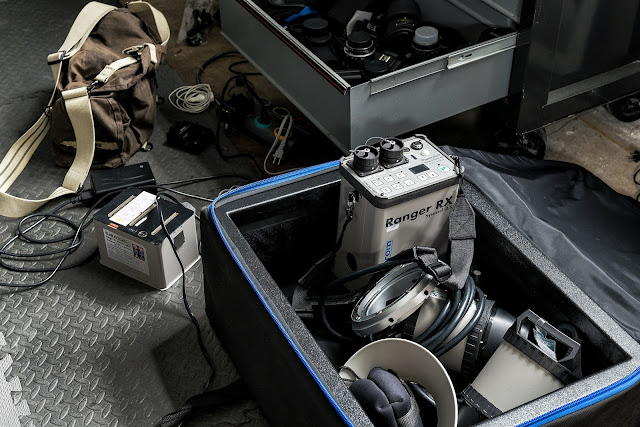 The longest tenure of a flash in my whole studio.... the Elinchrom Ranger RX system.

Sometimes I find myself a bit mystified at just how long a battery powered system can last. I know that my flash system was designed and built by the Swiss (who make watches that run for decades or centuries) but I continue to be amazed at the life of the sealed lead acid batteries the system uses. I've had the rig since 2008 and it just continues to pump out flash after flash under all sorts of conditions. Freezing cold, light rain, tremendous heat. It even refuses to shut down when I'm shooting boring dreck. It's right there with me.

I can't believe I was trying to sell this system a few years ago. In the time since I've made tens of thousands of dollars shooting with this machine and it's still one of a very small fraternity that can belt out precise 1100 watt portions of flash about 250 times in a row from one battery. We haul around a second battery when we are out shooting in the middle of a barren field or in the oil patch but it's rare that we've ever pulled out the spare and pressed it into service. The last time we did was when we were taking photos of swimmers for Ben's old Summer swim club. We photographed about 250 kids, five or six shots a piece, along with twenty or thirty different group shots (well over 800 images) before the first battery yelled, "I surrender!"

This is the flash system we hauled out to a park for the beginning of a day of shooting with the company's CEO. Our first shot was of him standing in a large field with big trucks in the background and the sun over his right shoulder. We put up a big softbox and matched the sun, lumen for lumen, as we coaxed just the right expression across the executive's face. Again and again and again. No shut downs, no hiccups and no interruptions.

Our Elinchrom systems has two heads and sometimes we supplement the system with three cheap flashes. We have one brand new Cactus flash that the company sent me to try our and I have two Yongnuo flashes that I picked up to use as slaves. They have slave triggers built in and so far ( a year down the road) both them work flawlessly. That was the bulk of our lighting package on this adventure but I would be remiss if I didn't mention our most valuable modifier for shooting in the sun. That would have been our 4x4 foot Chimera aluminum panel with a one stop diffusion silk stretched out across it. The first thing we did on almost every shot over the course of the week was to put that scrim up on  sturdy C-Stand (with sand bags) between the sun and our subjects. It turned hard light into soft fill. The big softbox did the rest. 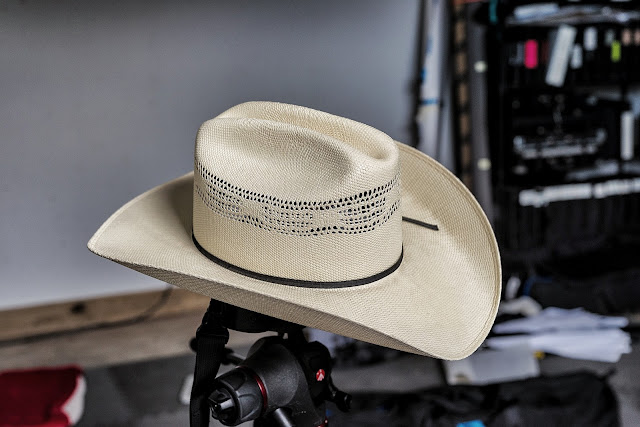 While we're talking about necessary tools of the trade....

Doesn't matter if you live in Texas or Norway, if you stand out in the sun for a couple of hours you're going to get burned. Your skin will turn red and you'll be uncomfortable in the short term. It might kill you (cumulatively) over the long run. I generally always wear a cap with a bill when I am out and around for a while but that kind of hat does nothing to keep overhead sun off the tops of your ears and off the back of your neck. The older, black cotton one I have had for years doesn't do much to cool you off either. If you are going to spend a week outside in Texas you need your Texan Wear. And in most cases that might include a stray cowboy hat from Stetson. The weave around the top is great for cooling ventilation and, as you can see, the wide brim does a good job protecting tender skin. You might have to tilt yours back while shooting but really, isn't most annual report photography ( or any photography for that matter) really a lot more standing around figuring things out and talking people through the process than actually working with the camera stuck on your face?

If the action gets thick you can always get your assistant to hold your hat for that part of the program. But really, it's nice to have when you are walking around a big electrical substation looking for just the right shot. Keeps light off the viewfinder too.

So, those are the pieces of gear that are new to me for this annual report. I'm happy. The client is happy. The assistant is happy (and wonderful) and everything is right with the world. Now I'm just resigned to the long process of retouching and bending the finished images to the mercurial wishes of the client.... But that's part of the job.

Here's my happy face at being done with all the shooting and the first round of post-production on our current annual report project. The balls are now in the hand of the client and my retoucher until I get back from New York. Hope y'all are doing well. Happy trails. 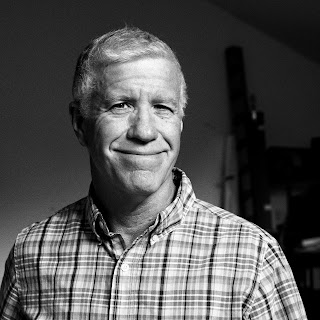 Posted by Kirk, Photographer/Writer at 18:03 15 comments: