Keeping up with the Joneses. Competing on the set against the new super video cameras. Dang, that's fast. 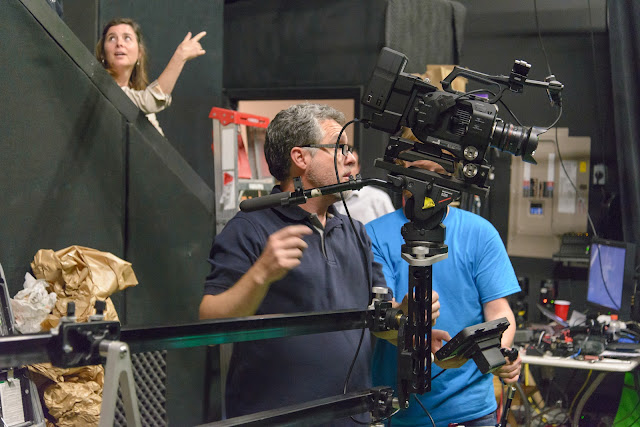 Dan Powers operating the FS7 camera on a jib.
(This image made with house lights on...)

My photography assignment yesterday called for me to shoot still images during a video shoot for a large radiology practice here in central Texas. In the past still cameras handled noise better than video cameras and most sets were so well lit that we could routinely shoot at ISO 320 and get great images. Things are changing very quickly. Now the video cameras have the advantage; especially when they are equipped with a file called S-Log that allows the camera to shoot a very flat image, capture tons of dynamic range and start (yes!!! Start!!!) at ISO 3200. That's their baseline when shooting in some of the Sony S-Log profiles.

Yesterday I worked side by side with videographer, Dan Powers. When you shoot on a video set you basically depend on the lighting the video crew is using for your light because, quite frankly, no one is going to wait around while you toss together a totally different lighting design hammered together just for the still guy. When the schedule starts to slip and crew overtime looms in the near future the still images take a back seat to making sure the motion team gets exactly what they need.

Dan had recently taken delivery of a brand spanking new Sony FS7 camera. The camera can output enormous 4K video files and that's exactly what Dan was doing. The files feed into an Convergent Technologies Odyssey digital recorder and were also backed up to second hard drive. The camera is really amazing, and especially so for the price. One of the things that makes it such a killer tool is the ability to shoot 4K at ISO 6400 with almost no noise and no perceptible degradation of the image quality.

The set we were shooting on was draped in black and the floors were black plexiglas. There were two main lights on set and each of them was dimmed way, way down. I needed to be very mobile to work in and around Dan who used his camera on dolly track, on a tripod and, at times, on jib. This meant that I needed to figure out the exposures that would allow me to handhold non-stabilized lenses without loss of image quality due to camera shake.

I'd brought along an incident light meter and I stepped in and took a basic reading of the position in which our talent would be standing. I can handhold a 50mm or an 85mm lens pretty well at 1/125th of a second and faster and I want to be shooting them at around f2.8 to f4.0 in order to get enough depth of field so that the backgrounds aren't just mush. The extra depth of field also helps to give me a wider window of acceptable focus in case the talent or I drift a bit during series of exposures. Basically, in this lighting set up that meant using ISO 6400 as my standard ISO for the day. In some configurations I needed more light and I weighed the pluses and minuses of shutter speed versus aperture based on the focal length range of the lenses.

While Dan's FS7 handled the low light with ease ISO 6400 meant that even with my least noisy, state of the low noise art cameras, I would still need to apply some noise reduction fine tuning in post processing. I guess there's still no free lunch for still photographers....

Before arriving at Dan's studio I was set on using the D810 for my shots. The camera does great files in most situations and I love shooting the flat profile and then tweaking in post. But I took one look at the light levels and tossed the D810 right back into the bag. While that camera is great for lots of stuff it really shines in good light and starts to fall apart (just a bit) around ISO 1600. My choice for this shoot had to be two Nikon D610s. Those cameras are quick and uncomplicated to shoot and they are at least a stop better in high ISO situations that the D810. My primary lenses for the day were the Sigma 50mm f1.4 Art lens and the Nikon 85mm f1.8 G. Both cameras nailed focus with both lenses with no need for micro-adjust (whew!).  How did I come to have two D610s in the case? That's a story for another blog.... 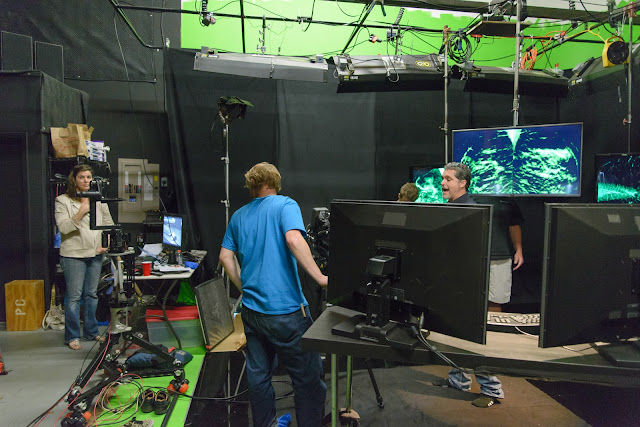 While the FS7 is a low light machine one of the additional issues for someone using a full frame still camera is that the FS7 has a "Super 35" sensor size which is smaller than full frame and just a tiny bit smaller than the APS-C size. This meant Dan also had one more stop of depth of field that I would and so could open up one stop more on his lens.  Since he was capturing in 4k he also had the luxury of shooting wide and then downsampling in his edit to hide even more noise as the final product for the client would be several 2K commercials. I guess the underlying point of my article today is that in the near future videographers will be able to shoot full motion at ISOs that leave still cameras behind and we'll have difficulty pulling the stills we need for clients because of the lower light levels.

The low light levels made sense in this project because they had four or five large monitors hung around as part of the set and it was critical to get well exposed images on all of the screens. And those exposures needed to match the light on the subjects. Plenty dicey stuff.

Funny to think that just two weeks ago I was using my cameras at their lowest ISOs and marveling at the detail and dynamic range I was getting from the files.... 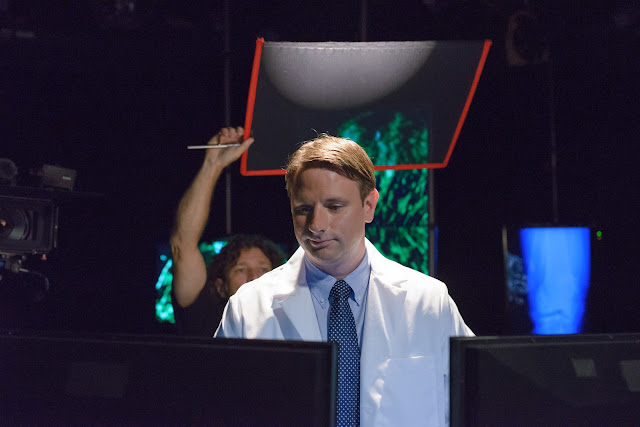 I often write about using nets to control lighting in my shoots and here is a perfect
example of how useful a two stop net can be. The jacket is bright, bright, bright but the hair light was needed to separate the doctor in the image just above from the inky black background.
A grip is moving the net around to see where he can get the maximum effect on the jacket and the least effect on the doctor's hair. Once the right position is determined the net will be positioned on a C-stand and we'll shoot around it. 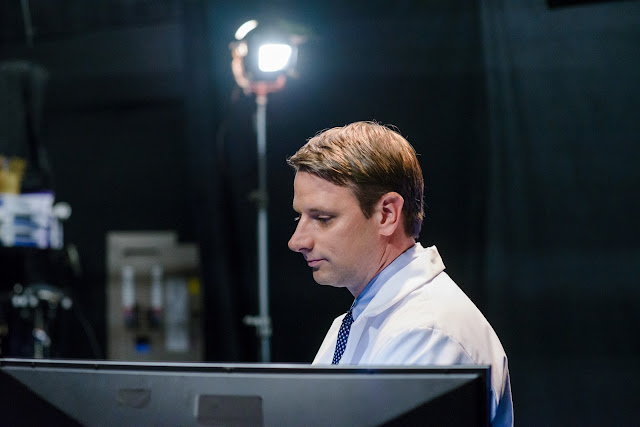 The Sigma 50mm 1.4 Art lens is a trouper. This is shot with a tungsten light aimed almost
directly into the lens and the lens is almost wide open. Its ability to resist flaring is very
good and the high levels of sharpness and detail are most welcome when the ISO goes up... 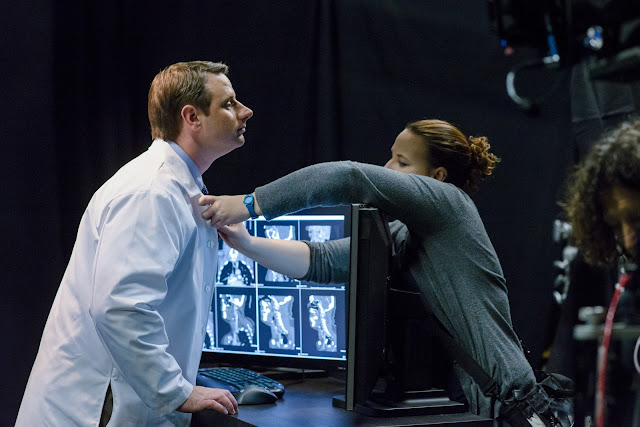 Make up and jacket styling are ongoing throughout the shoot.
Above, our make-up person jumps in during a lens change to
fine tune a pesky collar. 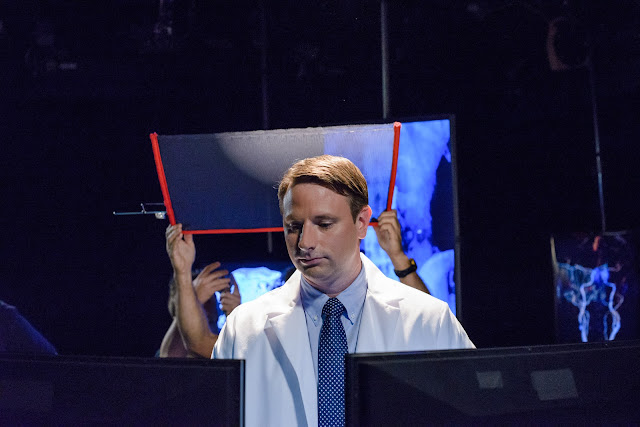 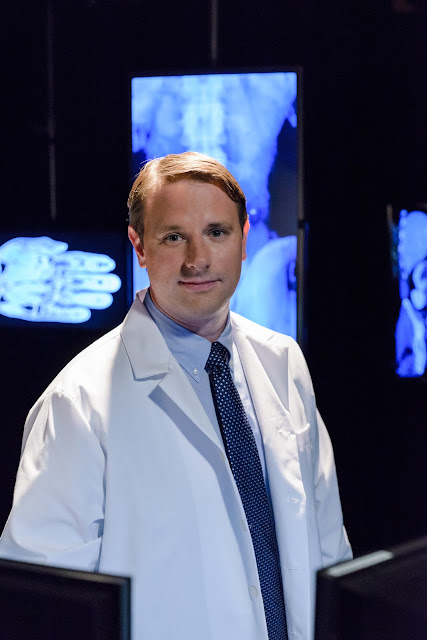 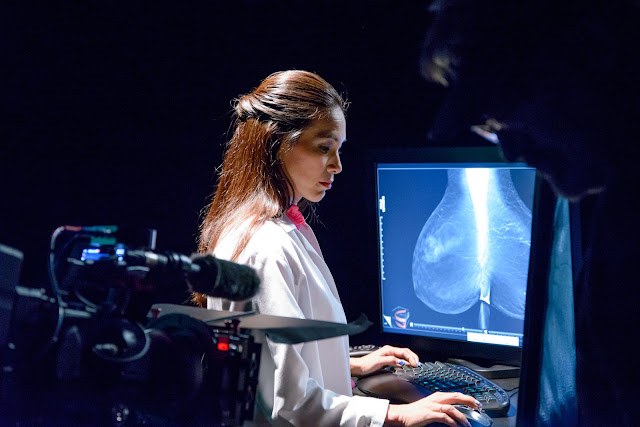 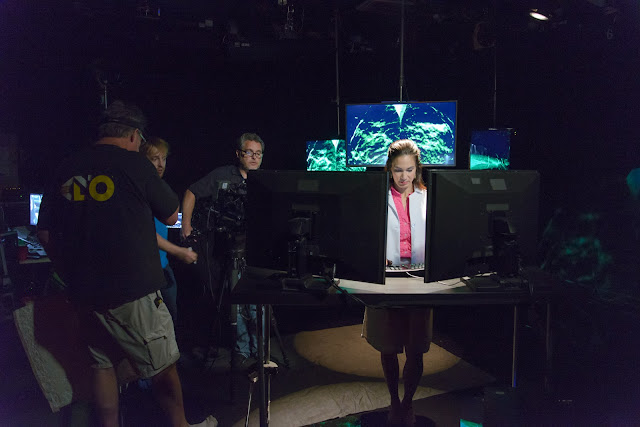 This shot (above) is a more telling representation of the lighting levels than
the shots done with the work lights on in some of the crew shots above....
As in: "You'll need a flashlight to see your shoes." 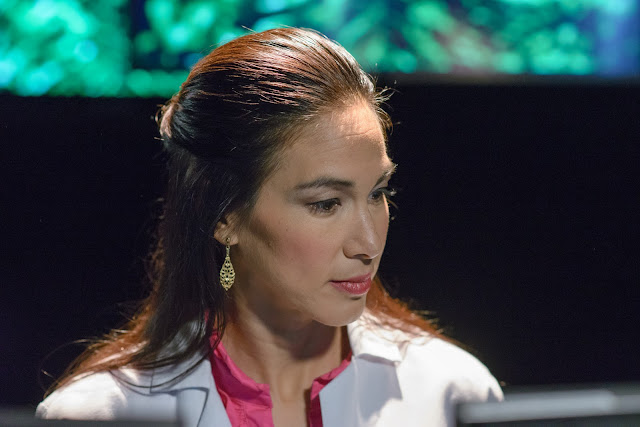 With a bit of Lightroom post processing the files turned out quite well.
I was impressed by the low noise and detail I was able to get out of
the D610s and the lenses I chose. 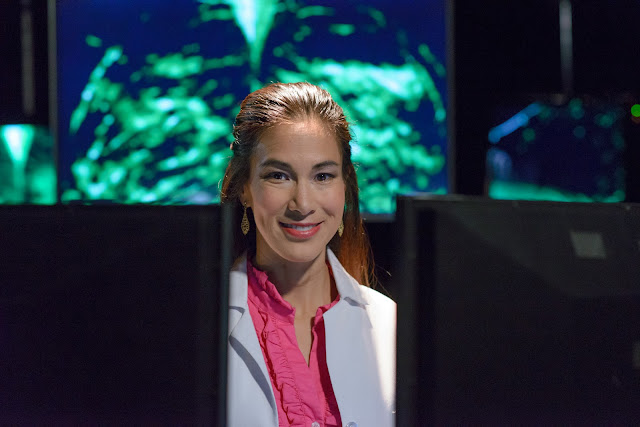 Some interesting points (at least to me) about the shoot were Dan's DIY servo controlled dolly that smoothly moved the camera through a wide arc. The dolly wheels ran on round, hard rubber track so re-locating the track was quick and easy. Dan and his assistant were using a wireless follow focus mechanism to hit their various focus points at different locations around the track. Dan controlled the camera motion while his assistant shifted focus using a wireless controller to rotate the focusing ring on the lenses they used. They never really needed to touch the camera unless they wanted to start or stop recording, change lenses or change batteries.

I shot about 1,100 shots and edited down to fewer than 900. Unlike the video team I had no script to work from and the potential uses of the still photos are wide and varied and undetermined at the moment. They include everything from new content for the client's website to printed ads in magazines and newspapers (yes, we still have a daily newspaper in Austin....).  Not having a comp or ad design to shoot to meant I needed to capture wide and tight shots, horizontals and verticals, and as many different facial expressions as possible.

In a shooting scenario like this one I shoot as much as I can to avoid getting caught short with a memory card full of blinks and grimaces. I'll want the client to make the subjective choices for expressions and compositions and so I tend to give them a wide range of files.

When I sit down at the computer my goal is to do a quick pass to dump all the blinks, smirks, shots destroyed by subject motion, etc. And, of course, we edit out anything that's out of focus or out of the safe range of file enhancement. Once that's done I do a second pass to color correct in groups and tweak shadows, highlights and sharpness and noise reduction. On this job I've spent about four hours in post to get to the point where I am confident to send over 800+ large minimally compressed Jpegs at full size. If the client selects an image that needs more work we'll be happy to charge them to go back to the raw files and work on the originals.

I really enjoyed being a still photographer on a video shoot. This is something I used to do on a regular basis for Time Warner and several production companies in town. I knew about half of the crew and the lighting director and I had worked together on video and film projects for over two decades. Nice to see the continuity in that part of the market. But really, next time can you give the still photographer a little more light? And maybe a little more fill in the shadow areas---just around the talent?  I know, I know... we were going for an effect. On the other hand I didn't need to carry lights, stands and all the other heavy equipment, only a case full of cameras and lenses and a tripod that saw minimal use.

I can't wait to see what the finished product looks like from the video production company. Dan was one of the hardest working directors I have seen and quite the technical wizard. I've still got a lot to learn.