Why I keep the Olympus OMD EM-5.2 cameras around. "It's not the horse it's the arrow!" 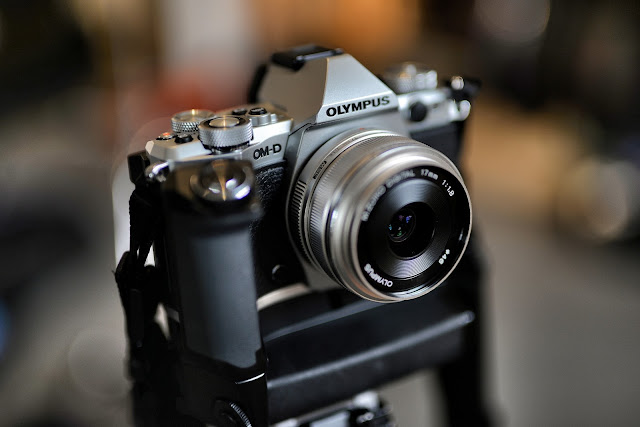 Oh sure, I love the big Nikon full frame cameras, especially when I have the time to put them on a tripod and take test exposures and chimp. Seriously though, it would be hard to dispute that for many applications that require very high resolution and very high sharpness the combination of the D810 or even D610, coupled with a killer lens (like the Sigma 50mm f1.4 Art), is tough to beat. But that presupposes that every shooting situation requires those very structured and measurable performance attributes. Your jobs with a camera may the same day-after-day and year-after-year but mine sure aren't. And when I'm off the clock and shooting for pleasure my mind wanders into other areas. Other camera system strengths. On most routine jobs the bigger cameras are overkill.

Don't get me wrong, I love overkill as much as any other red blooded American male who grew up driving big block V8's too fast. Always nice to have some in reserve in case you need to pass...

The flipside  is that I also sit in the other chair. The editor's chair. The post processing strato-lounger. The Eames chair of file enhancement. And setting there for a long time takes the creative starch right out of you while making your butt bigger.  I re-discovered this yet again on Tuesday morning when I sat down to convert about 900 D610 raw files into Jpegs and Tiffs. The fast SD cards (UHS3) and the quicker buffers of the newest generations of cameras make it easy to shoot fast, and shooting fast generally ends up meaning, "shooting a lot."  I could have shot less but you never know what you'll get next and....the cameras make it so easy. Hand me another slice of pizza...

But dang! Processing those files took longer than I'd like and in the end I'm going to guess that 98% of the images won't make the final cut into the two or three ads that are planned. And in the same vein once the client finds those three killer images they'll probably abandon everything else from the day's take and use the "keepers' over and over again. In this instance I felt like I needed the high ISO performance that the D610 provides. It's no little deal to pull off ad-ready images while hanging out at 6400 ISO.

When I shoot for myself I mostly come right back to the Olympus micro four thirds cameras and the motley assortment of Panasonic, Olympus, Sigma lenses, and the weirder, third party lenses I have adapted to the format. And I sat down today to figure out why.

I started shooting with the micro four thirds Olympus cameras the minute they got the first EVF enabled body ( the EP-2 ) into Precision Camera in Austin, Texas. The size was perfect and it was the first camera I could really use the Olympus Pen FT lenses from my half frame collection on. While we'd never call the 12 megapixel sensor "state of the art" the camera made mighty good images from day one. In fact, when I go back and look at work I did with that camera in 2010 I find that I love the color and really can't see the visual manifestation of lower dynamic range the way I thought I might. The color is as gorgeous as I remembered.

The full frame Nikons are great for things like theatrical photography where I need to make images during a dress rehearsal performance of a play.  The size of the sensor and the speed of available, long lenses makes subject isolation easy while the high ISO performance of the same sensors makes getting good, rich exposures with low noise easier as well.

The Olympus OMD cameras make nice enough images of stage performances but they have lose out to the high ISO performance of the D610s by at least two stops. The alternate reality is that the OMDs have great EVFs and that means every bit of action I shoot during a show comes pre-chimped and well corrected before it's even been shot. And the 16 megapixels on the sensor is the absolute sweet spot for almost every application while keeping editing from being a full time, cave dweller job.

Where the OMD cameras come into their own is travel. Whether you are traveling from your house to downtown and then walking around for hours at a time or when you are traveling to faraway places and need to pack and carry what you'll be wearing and playing with for weeks at a time the smaller cameras just have it all over the bigger, heavier ones. I can pack two cameras and three small lenses in one of my smallest bags and have everything I want in a package that camera be carried across my shoulder for an entire day without screaming for a chiropractor to fix my lower back, shoulder and neck as a result (not that I would ever willingly see a chiropractor...).