A quick break from my vacation break to add to my rambling review of the Sony RX10mkiii. Video. 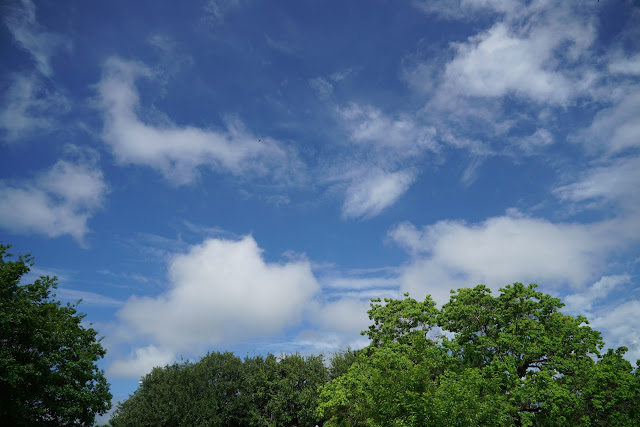 The Texas Sky Over the Top of My House.

I'm taking a break from my break to quickly talk about my recent good and mediocre experiences with the Sony RX10mkiii camera. I've been using it non-stop since Monday so that makes over forty hours of hands-on use this week. I've learned more about the camera.

I used the iii to shoot video on Monday. I was following a crew from an electric utility company as they restored service to various rural customers after heavy rains hit last week. I used the camera under an inexpensive rain cover as well as naked in the mists. I used the camera on a stout, video tripod and on a shoulder mount. I used it as a still photography camera this week to shoot archeological artifacts of the Southwest U.S.A. and I used it for four day this week as a production video camera. Here's what I know now:

I'll start with stills. I needed an all purpose camera that could take images of all sizes of native American artifacts in a temporary studio setting against a black background. The artifacts ranged from less than an inch across to about four feet in length. I lit the small "studio" with two SMD LED lights in 24 by 36 inch soft boxes. All the images are very well detailed and the color; set with a custom white balance on a Lastolite target disk, was very accurate and matched what my eye was seeing. I used a Gitzo tripod, sometimes with a side arm, and also used a 2 second self-timer setting to kill vibration. The result was high sharpness and detail right into the 100% view.

The pluses in this set up were the lens flexibility, the very accurate color and the convenient operation of the camera (loving the "punch-in" magnification for fine focusing....). I should also mention that I got through about five hours of off-and-on shooting before I needed to swap out the battery. All very cool.

The minuses were twofold: The AF hunts as the focal length set on the camera gets longer and longer. It's not a camera I would choose for low light, super long telephoto work. In good light it is superb. In less good light it hunts. The other minus is that its minimum focus distance is too long for good magnification of close ups of small objects unless you go to really short focal lengths. I want the angle of view I want and I want close focusing. It's a lot to ask but I want my fast, 24-600mm lens to also let me focus down to fill the frame with a one or two inch object. I don't always get my wish so sometimes I pulled out the RX10ii which focuses closer. Problem solved; just not very elegantly.

I shot still life artifacts all day on Tuesday and processed files till late in the night. Delivered via FTP in the early hours of the morning. Why the rush? Because I had three long days of video production ahead of me and didn't want to have to split my attention. Better to be done and billed than changing gears all the time. In hindsight, I would have loved to have shot the still life stuff on Monday but the video schedule required that Monday, as my time and involvement revolved around the schedule of a lineman crew and several large trucks. You can't always schedule perfectly --- as evidenced by the fact that this is the first work week in months in which I had no time to get to the pool and swim with my master's team. Absolutely tragic.

I shot on Monday with three Sony cameras. I used the RX10mkiii to shoot rainy roads, low water crossings, and skilled technicians forty feet up in the air fixing electrical lines. We also shot footage of a crew fording a river in an ATV. I used the RX10iii for long shots with nice compression, I used the RX10ii as a stationary "B" camera and I substituted the a6300 with the 18-105mm G lens when I needed to do continuous focusing while following a fast moving ATV parallel to the camera, and coming toward the camera. This was all video which I shot in 4K at 24fps, generally at ISO 100 and usually with a variable neutral density filter gracing the front end of the cameras.

The VND filter slowed down the continuous AF on the RX10iii.  Compromises abound.

On the other side of the coin are two things the cameras (the RX10mkiii and the RX10mkii) do very, very well; those are video and audio.

I've now shot over half a terabyte of 4K video with the cameras and am consistently amazed at the quality of the images when viewed on a 27 inch monitor. The detail is amazing and, with few reasoned adjustments to the picture profiles, (reducing sharpening by half) the tonality and integrity of the images matches what I am seeing from the A7Rii in the Super35 mode, right up to ISO 400. The images hold together past ISO 800 but you start to see more noise in the shadows than you will get from the A7rii. I think that's fair considering the difference in price and the mix of features.

The true testament to the quality is when an experienced videographer walks into your office, looks at a paused frame on the monitor and asks if it's a still photo from the camera. The 4K files are that good.

But the other thing I wanted to mention is about the sound quality of the cameras. I read a lot of stuff that led me to believe that you could NOT get good sound in the camera. That in order to get reasonable quality one would have to buy the hotshoe interface kit from Sony, with its own pre-amps, or resign yourself to shooting double sound. Here's my experience: I plugged a Sennheiser wireless receiver into a Tascam DR60ii and caught the signal from the Sennheiser lav mic. I adjusted the levels with the DR60ii preamps and fed the signal from that machine into the microphone input of the camera; being careful to adjust the levels to a minus 12 average (in terms of Db). The sound I've recorded on the SD cards is noise free and very clean. There are no negative inflections to any part of the sound. The issue I think most people are experiencing in their glancing trials of the camera's audio system have to do with the fact that there is a mismatch in terms of input/output levels from some microphones and,  in those cases, the camera must boost the signal more that it was designed to do.

Given a good signal to work with the audio circuits are amazingly clean.

I have one warning about using one feature on the camera!!! If you choose to use the face detection AF in movie mode you'll be walking a dangerous line when the light levels drop. In good light the camera locks onto faces and holds on to them tenaciously. As the light drops the camera loses its ability to grip onto those faces and starts flailing around, looking for something with more contrast to grasp for. If there are nice, solid lines and angles in the background that's where it's going to set focus.

If you aren't shooting in enough light to keep your exposures at ISO 100/200 with f4.0 you need to switch to MF and punch in to focus. Just a word to the wise... Every feature has its limitations; don't get bit on the ass by exceeding the "envelope" of engineering promise.

If my studio burned to the ground and everything inside melted the first two things I would replace would be the Sony RX10iii camera and my Apple Computer. Everything else could wait. It's really amazing how good this camera is.

Now, I'm going back on break. I've got a full week of editing to do and the client just added another video project in which I'll be dealing with making the CEO look good. Counting down the days until I am once again unencumbered by the reality of earning a living and am able to saunter back to the keyboard to chat about life, love, copyright infringement and why I don't have a Fuji camera......(kidding about the Fuji, just kidding).