I wrote about the importance of chairs earlier this week. What an odd topic. No, we won't be starting an affiliate relationship with a furniture store.... 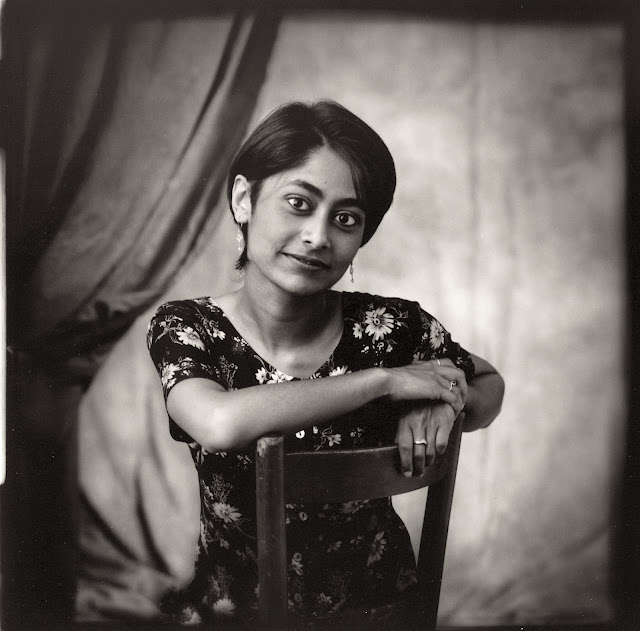 A while back I had a walk-up studio in an un-air conditioned hotel in downtown Austin. It was primitive but then so was Austin at the time. There was a couple who shared a space across the hall from me. They converted their studio to a live/work space, which required a level of suffering in the Summer (from the heat) and the Winter (Because the only shower was a cold water hook-up outside in the courtyard at the back of the building.

Since we were all in the same big building we leaned on each other for artistic support. I would often have them over to my studio when I needed to practice my lighting or work on posing. When I was ready to move on from that space they presented me a with a chair they'd found. The seat had been recovered with several different textures of leather and they had carved "R&P" onto the back. It stood for Robin and Paul.

That was the chair I was referencing in the previous post. I loved that chair and used it for dozens and dozens of portraits. It was just the right size for most people. Sitters seemed to sink in and come to grips with the chair quickly. I hesitate to say it but I think it had some sort of posing magic in it.

Eventually the chair disappeared. I guess that happens to magic stuff. But I keep my eyes out even today for a replacement. As you can see in the image of Mousumi, above, the chair gives people a resting place for their hands and helps to anchor them in the scene. Most of my favorite, mid-1990's portraits were done with this chair somehow incorporated as a prop or a posing tool. I'm at a loss to explain why I have been unable to find another one to replace it... 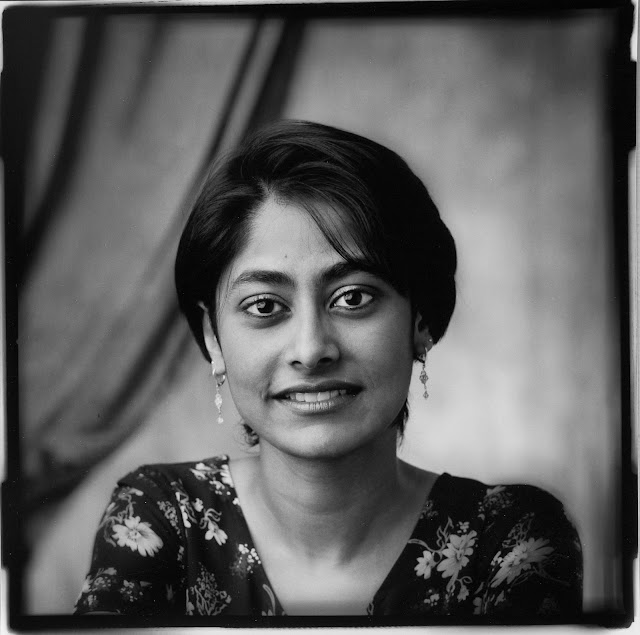 On another note someone wrote that they enjoyed seeing the latest stream of portraits EVEN THOUGH they were done on OBSOLETE equipment and with dead processes. Sorry, I don't see it that way. While I know the tools help to drive practice I have to say that changes in my portraiture have more to do with the acceleration of culture that we are living through.

People seem to be more frenetic and rushed and the idea of settling in for a half an hour or an hour of conversation and experimentation just seems out of most people's mental reach these days.

I recently watched a movie called, Shakespeare In Love. I've watched it several times before and each time I walk away amazed at the brilliance of the movie and a new idea about life and process. I've come to believe that most of the great art through the ages was created by people who rejected distraction. They worked at a pace determined by the art and the process itself instead of working to external deadlines and irrational and breathless hurry. If Shakespeare was alive today he'd no doubt be rushing from meeting to meeting, from coffee shop to coffee shop and answering messages so often that something would have to give. Probably the Sonnets. And maybe, after the first successful play, he'd be paralyzed by the process of giving profitable playwriting workshops and never write another.... But maybe he was so mindful of his process that he might be one of the few who could turn off the distractions and work without regard for the invitations for interruptions.

Artists seem to work with a mindfulness that's almost entirely missing from the frantic lives so many of us engineer for ourselves. We'd like to write a book or paint a painting or create a body of work but we reflexively answer our phones, send cascades of vapid texts, compulsively check the weather and our stock portfolios on a parade of screens. On iPads, Laptops, phones and even the obnoxious TV screens infiltrating restaurants (like a nasty plague) we are glued to streams of information that are irrelevant to our own best interests and our day to day lives. Everything adds up to keep us from our real work.

I am amazed at friends and acquaintances that watch sports on TV for hours and hour a week. What a horrible way to bleed down the clock of life. Watching endless newscasts via CNN on a big cellphone is just as bad.

People's work has changed not because digital cameras are amazingly different tools but because everything conspires to quicken (and cheapen) the basic process of creating work. Instant review robs us of continuing to experiment because we think we have "something decent" in the tank. Post processing has become archly codified and almost automatic. And without sufficient time to sit quietly and ponder the unique flow of our individual lives everything becomes homogenous. The constant pull of the devices in our lives robs us of so much and replaces it with so little.

I did a portrait of an actor yesterday. He came into the session with the idea that I expected him to be efficient. He was ready with outfits and he was ready to pose. We started talking and sharing life experiences and then we started photographing in drips and drabs and when I finally slowed him down he began to smile and gesture in a genuine and authentic way. When we ended up the session he was amazed at how focused we'd become during the session and how different it turned out to be than the sessions he'd done with photographers recently.

For me it was a re-learning experience. I re-learned that one of the things I need to control in a portrait sitting is the pace. That's something I do have control over. I also need to create space for a genuine connection. In deference to the idea of mindfulness I left my telephone on the dining room table before getting in my car and traveling to the theater. I didn't even want the pull of the phone from my glove box, quietly coercing me to check messages, check updates, check to see if people still like me, to check and see if I am still "connected."

It's a subtle thing but having the intention to concentrate is pretty vital to a pure process. Anything  you can do to eliminate distractions from what is right in front of you is a valuable move. It's not enough to turn something off because its very presence and availability is a temptation. A phone in the pocket is an invitation to break concentration during a costume change and change mental gears toward reaffirming something different --- your fear of being left out, or becoming micro-uninformed.

My exercise in leaving the phone totally behind made a difference to me. Sure, if the actor called to cancel I would not know until I got to the theater and someone gave me a message but I'd already blocked the time and it's not like a client will call in a panic and try to book an emergency shoot...
I might have had car trouble and it might have been good to call to let people know but really, car trouble is rare with modern cars. There really is no reason for us to carry phones all day long. If we keep them in our pockets we're probably giving ourselves butt cancer (if you keep the phone in a back pocket) or we're frying our upper thigh (in the front pocket). But the intention to carry the phone around is an invitation to becoming distracted and fracturing your attention to process.

Back to cameras. There is some stuff we learned to do with film that created interesting work but none of it is beyond the capabilities of modern cameras, if we are comfortable with shooting images that don't look good on the review screen. By this I mean that one of the many reasons we had unique art in the film days is that people didn't judge the intermediary part of the process. We knew that creating really flat negatives gave us opportunity to control contrast and preserve highlights in a very unique way. We can do the same thing with digital files if we aren't so compulsive about seeing a perfect histogram and a perfect review file on our camera screens. Heck, we could even shoot in one of the video S-Log settings to good effect. But it's the willingness to delay our visualizing gratification and accept processes that might take a number of steps to reach fruition that are important. And it's our acceptance of possible failure that allows us access to make interesting (from a technical point of view) images in the first place.

The emphasis everywhere now is on perfect files in the camera. Post processing is little more to many than making sure everything is brutally sharp and exposed within conventional parameters. Give me a flat and nasty file that has promise and I'm betting the image will be more interesting.

If you feel pressed for time to do your work and do your art I suggest you have two paths. One is to give up taking pictures and find something that occurs in smaller portions in order to occupy your time. The second would be to cut off the cable TV, turn off screen devices of all kinds and leave the phone in a drawer when it's time to really think clearly and produce. The distractions are not a positive feature but a insidious tool that creates resistance in nearly everything we try to do.

Just a thought on my birthday.

Finally, I do like the old work. But I like the new work I am creating just as much. You might not appreciate it the way I do but that's why you get to do your own work....