End of the year light purchases. A little upgrade in the LED division of VSL. Light Storm. 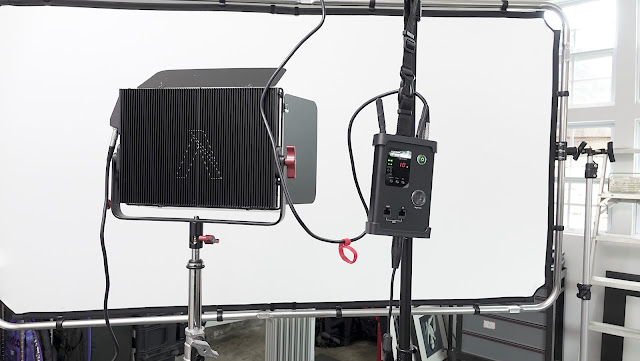 If there's one sector of photography that's changing as fast as camera technology (or faster) it's in the area of LED light engineering. The lights keep getting brighter and brighter while the color accuracy gets closer and closer to 100 CRI. There's a more modern standard for color accuracy that's being used in broadcast and that's TCLI. Here's a quick overview: TCLI

When I first started buying LED panels in 2009 they ranged in the 80-85 CRI range and I can imagine that they would have fared even worse in the new TCLI tests, which measure spikes and chasms of color response in these kinds of lighting instruments. The lights, at the time I wrote the book about LED lights for photographers, also put out much less light. We worked higher up the ISO scale and made other accommodations.

Last year, and part of this year, I started buying what I call, new technology LEDs, in that they use SMD (surface mount device) technology which has yielded a much higher output. The first of these lights for me was the cute and cuddly Fiilex 360. But I soon augmented that lower powered light with a brace of RPS CooLED, 100 watt fixtures. They used a new SMD designed, dense, 1/1 inch LED that acted more like a traditional open-face lighting fixture and less like a panel. I liked that because I could use my soft boxes on those lights. While the color was better than previous generations it still required that I pay attention and make custom white balances and use caution mixing the "daylight" LEDs with actual daylight...

I'd heard rumors that the newest generation of lights were getting closer and closer to 100 CRI but it was only when my friend, James, a very color-picky cinematographer, bought the latest DraCast LED panel lights and started gushing about them that I sat up and took notice. I've spent the last week or so researching and what I finally landed on as the best compromise of price, color, output power and rugged build was the new line of lights from Aputure marketed under the name, Light Storm. And the products I liked best brought me back around, full circle, to the panel form factor.

With a fairly big video project looming, and an intense studio still life project just around the corner, I decided to improve my light inventory by getting a set of the Aputure Light Storm panels. It didn't hurt that I needed to buy and put a few more things into service in order to reduce my tax burden....

I ended up getting two of the LS-1s panels, which are very bright, and two of the LS-1/2 panels, which are smaller but only a stop less powerful. According to reputable sources, who have measured them with the latest Sekonic 700 series color meters, both of the units exceed 95 CRI and the smaller unit measures at 97+ CRI. We're well into the territory where the diffusion material you put in front of the lights makes more of a difference in color accuracy than anything else. They are color accurate plus they provide the punch I used to get from a 750 watt tungsten bulb in a decent, open-faced fixture. Hard to beat at the price. (They retail for $695).

Each light is not exactly self-contained. They come in three "parts." The first is the light itself which is mounted in a sturdy yoke and has no controls or connections, other than a power cable. The cable connects to a control box which allows one to raise or lower the power of the lights in 90 discrete steps. Since the control box is separate you can put the actual panels up high and you'll have two benefits.  First, you move a good amount of the weight off the top of the stand, which makes the light and stand more stable. Secondly, you can adjust the intensity of the light without either bringing the light back down or standing on a step ladder.

The controller will also allow you to mount up a V-lock battery. With these bigger, more robust batteries you should be able to get about an hour of full power lighting without having to look for a wall plug. That's great for remote locations but the cost of the batteries is atrocious. Ah well, there's rarely free lunch.

Just downstream from the controller is a black, rectangular power supply. This plugs into the wall on one end and into the controller on the other. So you have three physical devices (light, controller, power block) as well as the interconnecting cables. A bit messy but manageable.

One more interesting feature is the inclusion, with every light, of a wireless, 2.4G remote control. With the remote you can turn the lights on and off, and you can control the power settings. Great for changing ratios while you are at camera position; especially when the lights are hung up high. There are separate channels so you can control three different banks of lights from one remote. Interesting, but I still keep reaching for the controllers and enjoying the tactile reality of lighting control.

The bigger light, the LS-1s, uses SMD LEDs but, like previous generations, hides them behind little plastic nubbins or clear lenses that create directionality (or micro focus) for each LED. The way the light is designed gives it a 20-25 degree light angle. It's got more throw that way. If you need a softer or wider beam you can easily put diffusion in front of the fixture. In fact, the maker provides an envelope with sheets of carefully selected diffusion to do just that.

The LS 1/2 uses its SMD LEDs naked. The light emitting business end of each small "lamp" is right on the surface and the fixture uses nothing to focus the beams. The light seems exceptionally bright but it does cast a very wide spread of light. You'll either want to use them with big diffusion or as background lights. They have beautiful color but you'll need to practice what you learned working with Lowell Tota-Lights from the tungsten era in order to get the most out of them, vis-a-vis modifications.

So, now that I've had a chance to play with them what's the bottom line assessment?

The color is so clean that this by itself means they've grabbed a spot as my preferred lighting tools. It's just so clean and perfect. The flesh tones require very little (usually none) work in PhotoShop and the power is quite welcome. Since the entire back of each lighting unit is one big, extruded heat sink I'm going to give them two thumbs up for engineering and (hopeful) reliability.

The ones I bought are single color temperature models. They just do daylight. 5500 Kelvin daylight. I've had bi-color panels in the past and, while the color flexibility is great to have, you lose half the power since the flexibility comes from turning a daylight set of bulbs up while turning tungsten bulbs down, and vice versa.

I bought four lights in total. Two big ones to use with diffusion as main lights and key lights and two of the half units to use to evenly (and widely) light backgrounds with direct (unmodified) lighting. They pack down smaller than the RPS lights and are smaller and lighter than the previous panels I owned.
All-in-all it's cost effective package for around $2400.

Were I to persevere as a still photographer only I doubt I would have even considered the upgrade but one of my goals for 2017 is to drive the business toward a 50/50 split; photography and videography, and a set of Profoto strobes just won't hack the moving part of that equation. One more acquisition to write about before the end of the year. Stay tuned. 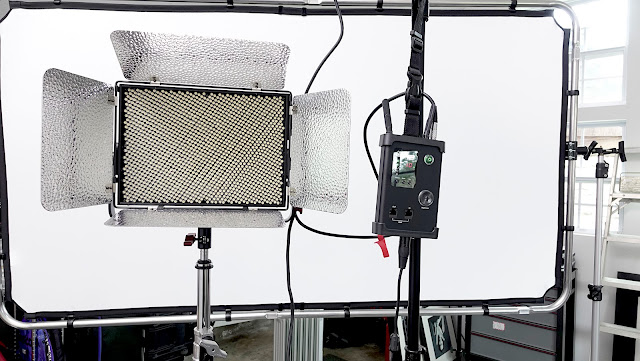 The Aputure Light Storm LS-1s fixture on the left, controller on the right. 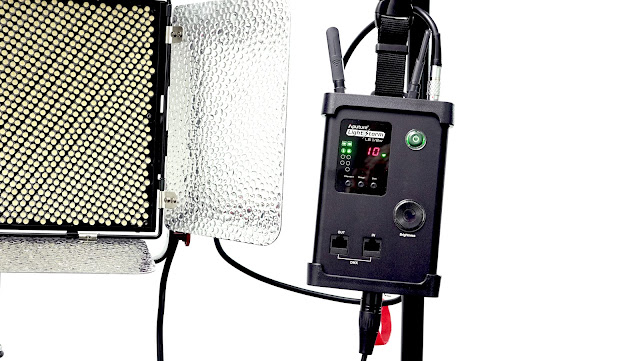 A closer view of the controller, which also features DMX control. 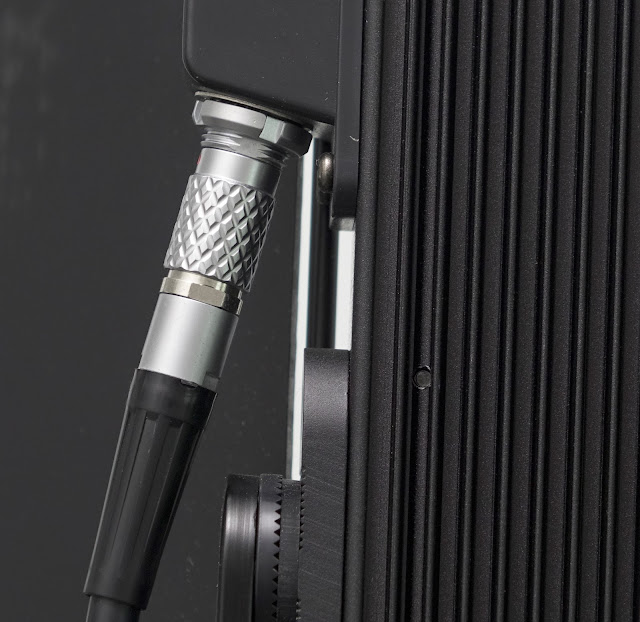 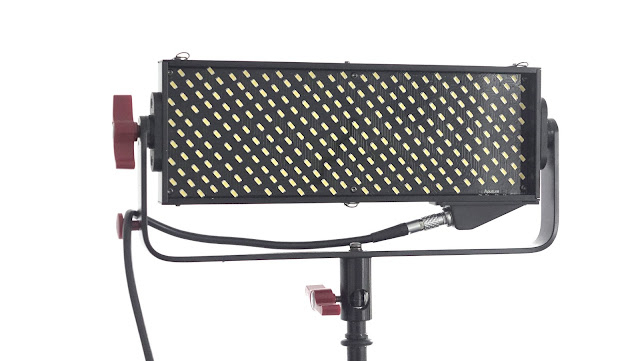 Posted by Kirk, Photographer/Writer at 14:35 3 comments: