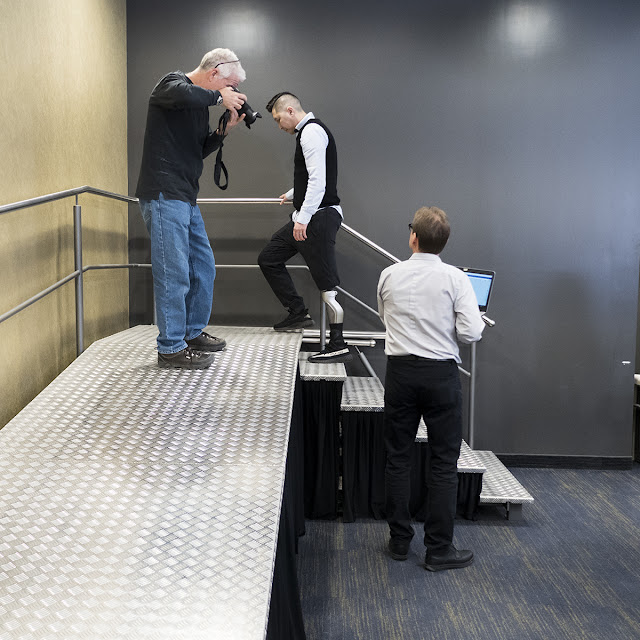 Habit is a powerful deterrent to change. Most of my friends who have been in the video business for quite a while started out shooting with big, over the shoulder, ENG video cameras. They weighed a lot and came with batteries that are heavier than my entire RX10iii camera. Most people used them planted on stout tripods. Part of the process was connecting multiple people to the camera.  Umbilical cords running off to sound techs and cables running off to remote monitors so everyone on the crew and client side could second guess and comment on your shots. People standing next to the camera to focus.  It's a process that depends on a slow, step by step collaboration with one's crew.

I was the still photographer on an advertising video shoot last year and I was amazed at the  waste of time a relatively large group of seasoned professionals was able to engineer. We waited for 1990's style lighting to be set and tweaked by a crew of three. We waited as the sound person went through cord after cord, trying desperately to track down a persistent hum until someone finally pointed out to him that his cable was running directly across one hot extension cord and running parallel to another...

I am certain that the audio would have been just as good run directly into the videographer's FS7 video camera instead of monkeying around with dual sound into a high end audio deck.

The videographer was experimenting with flexible, rubber dolly track and a motor driven set of tripod wheels and we lost a time to all the jerky motion, caused by the on-off of the motor ,out of the system.  I would have suggested turning the servo driven motors (complete with game style joystick controller) off and having one of the many superfluous people on the set just push the whole assemblage.

With the camera fully festooned with "pro" crap it must have ballooned to double its unencumbered size and weight. Fancy grips, electronic zoom triggers on the handgrips (doh! Prime lenses), giant matte boxes on rails, Anton Bauer batteries hanging off the back (and we were surrounded by electrical outlets....go figure) and a gigantic, third party EVF replacing the stock one ---- even though the whole camera rig was tethered to a monitor just to one side of the camera. It was an amazing example of last century necessity translating into this century overkill. All the touches, the job specific crew, the tight anchoring to the tripod, the emotional anchoring to the failed dolly track, and the constant fixing of unproven new tech cut the total number of in studio shots to about 10 that day. And when I saw the final product I didn't see the value add of the time expended. It reminded me of a mid-tier corporate video from 20 years ago.

I am baffled at people's resistance to change. I can't imagine trying to get enough fluid and dynamic shots in a day straitjacketed by such a clumsy process. Especially when most of the video being produced is headed straight for your phone.

The "big crew" approach to video production is entirely at odds with the style of video content and editing that's popular today. Watch commercials, good web content, or a modern event presentation, and you'll see fast cuts. Except for interview segments it's routine to see a new scene, from a new cut, every two to three seconds, and four to five seconds now feels like an eternity. If you are editing a current, three to five minute, video ( see our "Cantine" video) you're likely going to use about 60 to 100 short clips (or more)  cut together to make the program. This edit pacing demands a faster, more fluid approach to shooting ----- unless your client is comfy giving you days and days to move the big camera and crew around, and to stand stationary, problem solving your rig for a while...

I like using my RX10iii, or the model 2, for the majority of my non-interview shots. If I'm on a tripod (a nice, lightweight tripod with a good head) I can shoot lots of moderately long shots with good stability in 4K and also have the advantage (when working in a 1080p timeline) of being able to crop in, use the "Ken Burns" effect, or lay on additional image stabilization in post production.

These cameras come into their own when you pull them off the tripod and use them handheld. In this capacity I switch gears and use them in 1080p so I can take advantage of Sony's very, very good "active" and "active intelligent" I.S. modes. With practice one can learn to do steady, even, short pans that work. In wider angle settings, when using the continuous focus modes, you can use your feet (or bend at the waist) to "push in" or "pull out" instead of zooming. No need to set up sliders or improvise dollies for these kinds of clips. And, with good performance AF used in close, wide shots you certainly don't need to travel with a focus puller.

We were shooting mobility this last week and I thought it would be great to do some trucking shots; moving the camera parallel to the talent while he walked with the camera cropped in close to the talent's microprocessor controlled leg. The old school method would have been to have the extended crew bring in dolly tracks and piece them together for the fifty foot stretch we might be traversing. We'd also need to rent a dolly.

With a stellar lens and really good image stabilization we made good use of a Metro cart with a heavy book and a soft, pliable scarf as a camera holder. It's hard to see in this illustration (below) but I have a small (7 inch) monitor on the top shelf of the cart so I can accurately track the talent and match his speed. It took five minutes to rig and the shots looked great. Total time getting 8-10 variations was about ten minutes. Then we were on to the next scene.

And it's not just "about the camera" it's about the need to embrace a newer, faster production mentality if you want to work efficiently in a modern visual idiom. I could do the same thing with a Sony z150 video camera but I couldn't do the same kind of work with an FS7 and a handful of single focal length, manual focus lenses. Not the same. Difference in quality? Tell me when you see that FS 7 programming on the small laptop screens, telephone screens and on your iPads.... 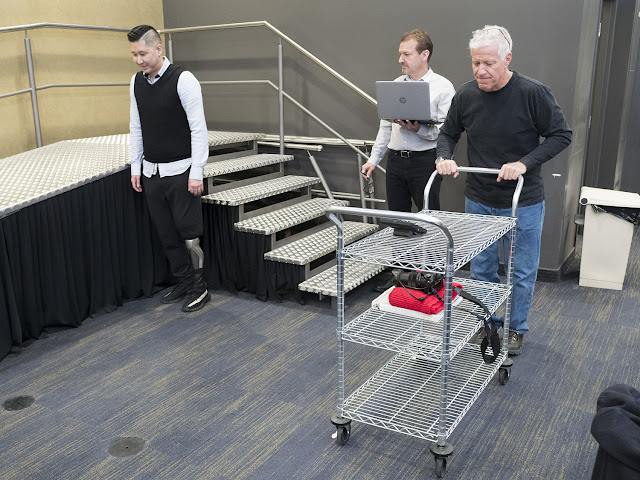 One of the most compelling production features of the RX10 series cameras are those great lenses on them. The shot I was working on below tracked along with our talent couple as they walked up a long sidewalk toward the camera. Using the center focusing sensor the camera was able to accurately track the couple while I use the power zoom control next to the shutter button to (slowly) zoom out and maintain the same frame composition as I slowly and smoothly zoomed from nearly 600mm (equiv.) to about 35mm (equiv.) as they strolled past my camera position. One take. We reviewed it, saw that it worked and moved on. Can you imagine doing this same shot "old school" style? A bigger camera on a solid tripod with an operator moving the camera to maintain the couples' comp in the frame while a focus puller racks focus on a super heavy and super expensive, manual focus zoom lens! That takes coordination, rehearsal and manpower. And for what? To match the quality of a shot we were easily able to get while handheld, in blowing snow and freezing wind? A shot of which only a small portion will be included in the final edit... 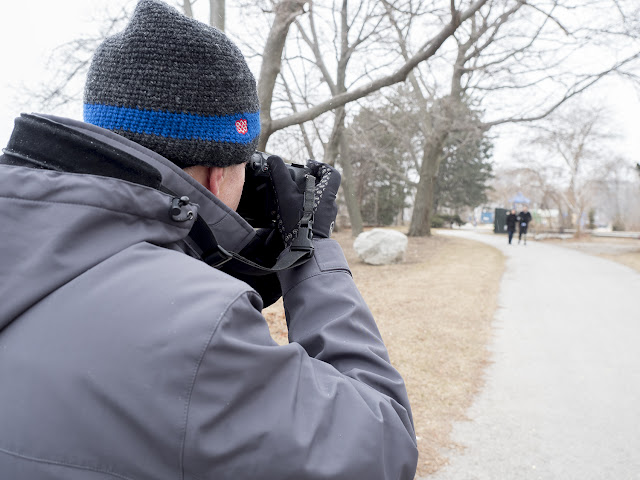 When my (videography) friends and I talk and the conversation comes around to how we shoot video they are always quick to dismiss the Sony RX10's (and other non-conventional cameras) and when I ask them what's different they point to XLR connectors, built in ND filters and external controls. Really? Adding a filter, and an audio interface from Sony is child's play ---- and very affordable. External controls? Set your camera up before you start shooting and you'll have it nailed. For high end work I totally get the bigger, denser files from more expensive, dedicated video cameras, but.... the Sony UHD looks pretty good on big screens; especially if you nail the exposure and white balance before you push the red button...

I could be missing something but the final results tell me I'm heading in a direction that feels right for me. Smaller, faster, happier.

Posted by Kirk, Photographer/Writer at 09:59 10 comments: