First Walk Around Downtown in Weeks. Took my favorite "trash camera" the A7ii. 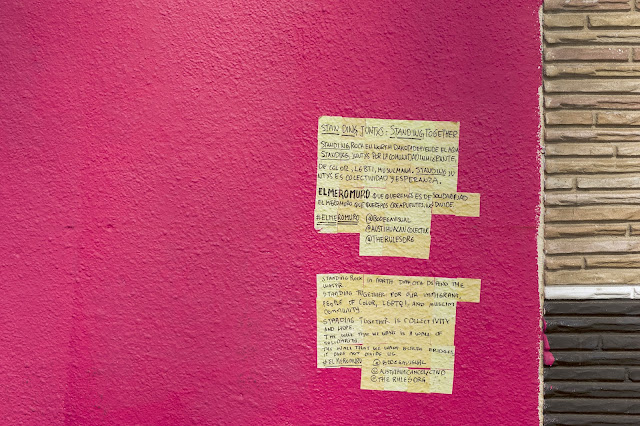 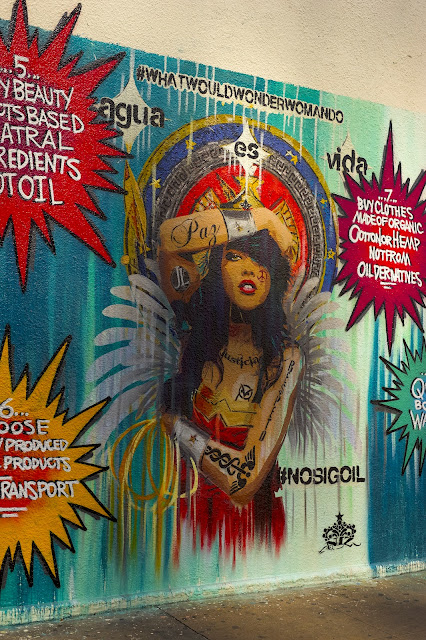 I worked on editing video all weekend and right up until the middle of Tues. When I felt like I had a fairly solid "rough cut" I uploaded a copy to Vimeo to share with my clients. I'd been "nose down" on the project for several weeks and felt overdue for a little photographic downtime. I also realized that I hadn't been in downtown Austin is a couple of weeks; and a lot can change in 14 days.

Yesterday started out at a chilly 51 degrees but by the time I got out the door it was in the 80s and headed for a (late February!!!) high of 91 (f). We went from jacket weather to shorts and flip-flop weather in a matter of hours.

Being a traditionalist I took along the Sony A7ii camera and the new-ish FE 50mm 1.8 lens. It's a nice, small combination. I like using it the way we used older cameras. I keep the exposure setting to manual, pretend I'm using Kodachrome 64 by setting that ISO, and then setting the white balance to generic daylight. Of course, I am cheating because I have the camera set to generate raw files.

The walk was non eventful. Austin is in a quiet lull. The calm before the storm that we call, SXSW.
The restaurants looked a bit empty and the streets were strangely almost clear of traffic. In the first five minutes of my walk I passed by five different 30+ story building projects that will add more class A office space and high end residential capacity to the central business district. The next part of my walk was around Congress Ave. heading towards the City Convention Center -  ground zero for SXSW. All over this area crews were working to clean the chewing gum (and worse) off the sidewalks, putting up new food trailers, getting signage ready, finishing street projects in order to have open traffic lanes for the estimated 100 million people who will be escaping here from the frozen North to listen to bands, listen to panels about the future of social media and to either get drunk or overdose on coffee.

The most interesting stuff I found in my walk was, again, wall murals. The one just above is more or less an advertisement for how to reduce your consumer footprint/impact. But I'm a sucker for "exploding balloon" graphic design so I just had to document. The entire wall was fun but I didn't feel like standing in the middle of a four lane street to try and get it all in. Just note taking here.

If you are keeping score then you should know that I had a blast doing the latest video project. After our last project the biggest thing on my to-do list for the current project was to do a much deeper dive into pre-production. I wanted to have all my ducks in a row before I even pulled a camera out of the bag. I wrote a detailed scripting outline (our project was composed of unscripted interviews but I still wanted to concept the structure and direction as a map to lead the interviews....) a two page shot list and a "look and feel" statement (just for me).

I asked for the names of the people we would be interviewing in Canada and took time to call each of them and do a phone pre-interview so that the interviewees and I knew something about each other, shared some stories, and didn't have to fire up an interview cold. That was a huge help!

I know we tend to spend a lot of time talking about gear but it's generally the least of my worries on projects like this. The big concern is whether or not you'll be able to create the right emotional space for the person on the other side of the camera to share their story in a way that will work for the whole of the video program. So much rides on the way you ask questions. You also have to create a physical space that makes people comfortable opening up and sharing.

I could have used any number of cameras or microphones and gotten into the same rings of the target, technically. If the content seems transparent and the story keeps your attention then you have more or less gotten the hard stuff done.

It's no different than photography in the sense that pre-production and having a plan makes for a much more efficient and light hearted shoot than just waiting for the client to show up at the door with a grab bag of stuff to shoot.

Sometimes I feel like I ask too many questions when we begin discussing even the simplest shoot but, knowing that we'll be shooting chrome against white, or interviewing someone who has had a recent trauma, means we can be ready with dulling spray (for the chrome) or a quieter, more sympathetic demeanor for our interviewee. It's like scouting. A walk through of your primary shooting location before the actual day of the shoot gives you a mental map of the best locations in which to shoot along with understanding the location challenges for which you need to come prepared.

Is the perfect room, visually, a bouncy, echo-y room, as far as audio goes? Knowing this in advance means you can prepare and treat the room with sound blankets and padded furniture to subdue acoustic problems. Is the interviewee prone to forehead/nose shiny-ness? Maybe bring along a make up person. Is the HVAC noisy and old? Find out who can help you turn it off for a half hour so you can get good audio. Heading out to shoot exteriors in the snow? Bring great gloves and shoes.

In the hierarchy of tools I guess I'd have to say pre-production, scouting and familiarity with the subjects, are much more important than which type of camera you'll use, or what brand of microphone you'll hang out in front of your subjects.

As I write this I know that it's a lot more boring to discuss pre-production than talking about which lens we might get if we decide to buy the new Fuji medium format camera, but --- the real mission of this blog is to share real information about what I do for a living in.....the real world. All the organizational stuff is really where the "rubber" of the businesses of photography and video production meet the road.

The amount of time shooting or recording is about 5% of most projects. The rest is selling the project, casting, getting props, figuring out the logistics of getting there and getting back, archiving, editing and post production. Camera in hand? A couple hours a day. When working. Everything else? Days. Weeks.

note on boy: Ben made it safely to Seoul (a bit jet lagged), he's having a blast. I am relieved.


Posted by Kirk, Photographer/Writer at 10:17 6 comments: