The process of "standing in" so we can figure out lighting and what needs to be cleaned up. 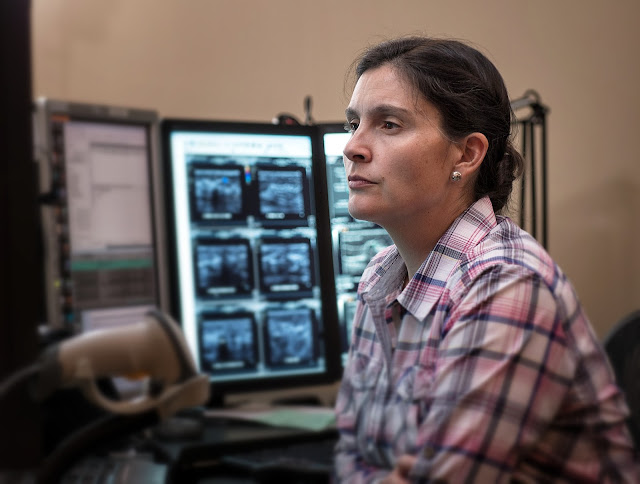 Amy stands in for a Radiologist as we begin the prep of the scene.

I've been working for one large radiology practice here in the Austin, Texas area for nearly twenty years. They are fun to work with and have lots and lots of cool gear that looks great in photographs. Every few years, as the gear changes and the practice evolves, we get to do a series of daylong photo assignments in order to help them build an ever-changing image catalog that the practice's marketing team can use for advertising and public relations.

Yesterday Amy (my assistant) and I met up at one of the practice's mid-town clinics to make environmental portraits of doctors and health navigators. Our client wanted to use selective focus in the images in order to focus attention on the people and pull attention away from unnecessary background detail. It was an opportunity to give one lens in particular a workout. I used the Rokinon 50mm f1.2 lens as frequently as I could and supplemented with the Sigma 30mm f1.4 when I needed a wider angle of view. The important thing for my was how well each lens worked at or near its widest aperture. In that regard both lenses passed my tests.

Since we were aiming to work with the taking lenses used as wide open as possible I decided to skip electronic flash and do all of our lighting with LED panels. Working this way made it easier to get an exact balance between the room illumination and the brightness of the reading screens that were somewhere in nearly every frame.

My method in setting up lighting was: First get the right illumination intensity on the dominant computer screens. Second, set up lights that would mimic the direction and type of light illuminating the face of someone sitting in front of a monitor. In the case above we had a tight space to work in behind the computers (less than a foot). I taped white paper on the wall in front of Amy, behind and above the monitors and bounced a small LED panel off the paper. It made a convincing computer monitor light source that was controllable.

The next step is to balance the primary illuminate on the subject with the illumination on the screens. This is straightforward as most good LED lights can be adjusted from 10% power to 100% power in tiny increments. After the balance is achieved we bounced several lights from the ceiling to bring up the overall light levels so we could seen into the shadow areas in a believable way.

Once we got everything lit we started cleaning up the clutter that would be in the shot. We removed the lighting fixture just behind Amy's head, cleared off papers, eliminated the bar scanner in the bottom left hand corner of the frame, etc. Only then were we ready to bring in our physician and start the process of posing and fine tuning. If we are photographing someone in a white coat we keep the portable steamer close at hand to get rid of wrinkles.

Since I was shooting at or near wide open it was important to go beyond focus peaking and punch in as far as possible in preview mode in order to get a highly magnified section of the frame for fine focusing. I compose the shot and then move the target for focus to the eyes of the subject without moving the camera. Focus and recompose is NOT an option with narrow depth of field....

I've also learned (the hard way) to check focus frequently. When manually focused any sway on the part of the subject might be just enough to kills the sharpness where it's needed. We worked on a tripod for all but two of the shots in our assignment yesterday. It helps. 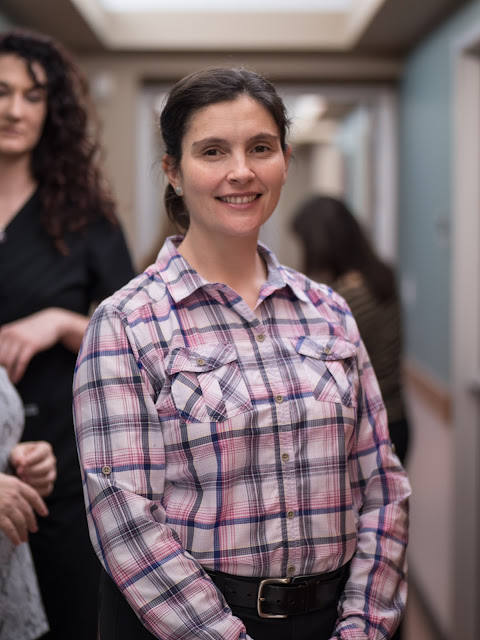 Amy stands in for a classic "hallway" portrait.

Clients sometimes like backgrounds that dissolve away. But with m4:3 cameras making backgrounds dissolve works best if the subject is fairly close to the camera and the background is fairly far away. We found the hallway above and decided it would be a great place to make portraits of busy doctors.

My first impulse was to block the existing light with a scrim and then re-light the subject but when I put Amy into the location the art director and I decided on I noticed that the ceiling lights were indirect, firing into a white barrel vault ceiling that made the lighting very soft and flattering. All that was really needed was a white reflect just under the bottom of the frame to bounce light back under our subjects' chins. Before Amy set the white reflector in position we used it as a target for a quick custom white balance. When the art director saw the results on the monitor she decided that we could do two other people in the same location. As with the first image I am using a tripod, shooting wide open and re-focusing frequently.

(Note: if you are using an AF lens in a situation like this, and it's one of the Olympus Pro series, make sure to switch the AF off on the camera body. Using the manual clutch on the lens is great but once you take your hands off the lens barrel  and then touch the shutter button the camera will re-focus your lens UNLESS you have set the camera into MF).

Our biggest challenge in the shot above was to keep people out of the background. While we were shooting after hours we had a bunch of talent waiting for various shots and they wandered in and out of the hallways. A lot. Had the budget been even more generous I would have hired a second assist and tasked them with keeping people corralled and keeping an eye on clients who wander away from the set just when I'm looking for shot approval.... :-)

Having a stand in is great because getting busy doctors to stand still while we change this and that is a money losing venture of the practice and they are not nearly as cooperative in the pre-shooting part of the exercise as a good assistant. 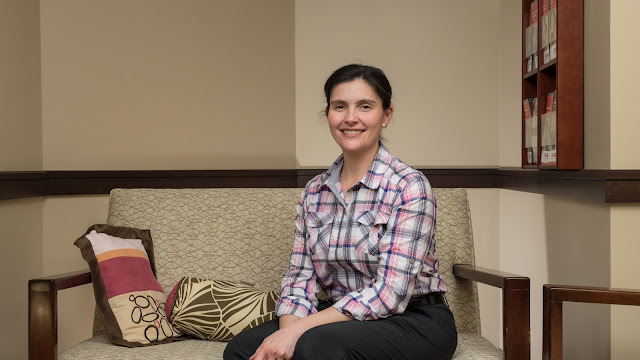 Amy stands in on our "consultation" location.

A lot of location photography is about moving furniture so it works for our compositions. Consultation rooms and exam rooms are small because....they don't need to be big and square footage in Austin is expensive. But the tighter the space the harder it is in which to light and compose. Our quick stand in shot showed me that we needed to cant the small couch and the matching chair about 20 degrees counterclockwise in order to best show both faces of the talents who would be in our consultation shots. Since the room was tiny and my back was against the wall we needed to have the art director and the talent wait outside the door as we brought in three lights, some modifiers and a bounce card or two. It's easier to put a plan into place if you aren't dodging closely packed people.

The shot above is our starting point. There is a process which involves putting up the lights you think will work and then fine-tuning and the looking, again and again. Better not to bore your subjects or your art directors with too much picky rearrangement; especially when you have a good and patient assistant in tow. 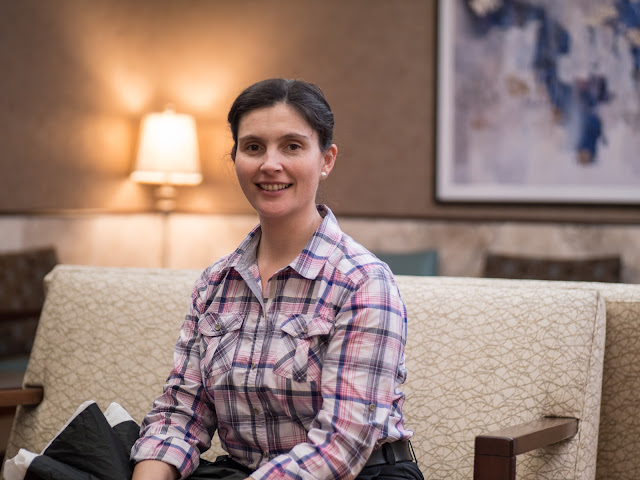 Our final location. Another spot for consultations.

We were on our way to another consultation "closet" when we walked past a big, welcoming waiting area and it dawned on me that this would work much better, photographically. I liked the nice, warm light in the fixture at the back-left of the frame and the colors were great. We switched around some chairs and then started lighting by using the illumination of the "practical" light as our starting point. Some top light and a bit of back light from the right side of the frame were just right. I backed up as far as I could and shot with the 50mm Rokinon (which is the equivalent to a 100mm in full frame).

About two hours into the shoot Amy walked up to me and handed me a bottle of water. "Drink." She commanded. She is aware that sometimes I get into the rhythm and schedule and forget to stay hydrated. It's good to have assistants that are watching out for me.

The entire shoot yesterday was lit with two Aputure Amaran 672S daylight LED panels and one smaller Amaran 96 panel. The bigger panels both use Sony NP970 batteries which are enormous and heavy. The benefit is that we were able to shoot for about five hours and still come back to the studio with at least 50% in reserve for each light. Since both of the big lights take two batteries I also packed two more sets. Just in case. You never know when you'll need to run at full power for long set up.....

I think of yesterday's shoot as a warm-up for our shoot coming up on Saturday. We'll be on location for a full, long day at a different location. We'll have about 12 models and 3 marketing staff with us as well as a hair and make-up person. The client is arranging craft service and, so far, they've done an exemplary job.

The Panasonic GH5 continues to exceed my expectations ---- as long as I use premium optics and use them correctly. The LEDs are priceless for work like this. But the best productivity on jobs like this is a good assistant who keeps an eye on schedule, clothing details, stuff intruding into the frame and more. Amy is a great assistant! On a busy location it's best not to cling too strongly to the "one man band" concept of production photography.

Hope your week is good. We're packing up for tonight's video project. More on that tomorrow...

Posted by Kirk, Photographer/Writer at 13:21 5 comments: