Musing about last Saturday's photo assignment where the critical parameter (as usual) was the lighting. 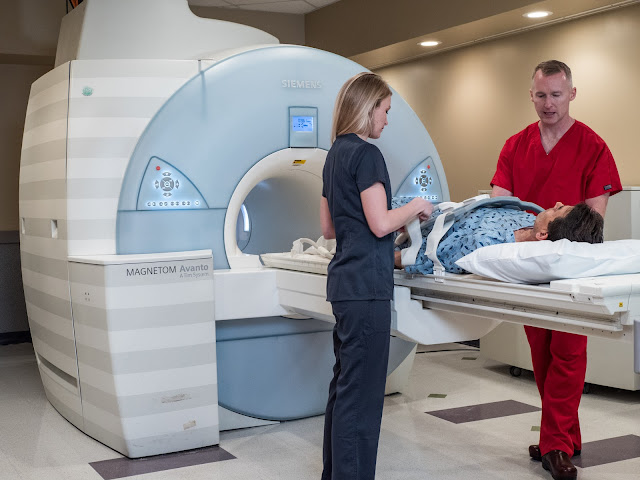 This shot is here to illustrate what I write about in the blog below.
It is not a "finished" "polished" portfolio piece. You didn't pay for that.
We'll fine tune and enhance the final image that the client chooses from
this set up. We don't routinely polish everything that gushes out of the camera.
There's not enough time for that. But I think this illustrates a point
I'm trying to make below.

Amy and I were on location by 9:00 a.m. on Saturday morning. We were shooting another radiology clinic in Austin, Texas. Our shot list was ample but that's par for most image catalog shoots these days. These kinds of assignments can be done with just about any good interchangeable lens camera made in the past few years, anything from 16 megapixels to 50 megapixels will work fine. And based on the metadata associated with the files the quality of the lenses you use is a lot more important that the advertising impressive fast apertures. Most of our shooting through the day was done with a wide ranging zoom and it was used almost exclusively at f4.0. That's not f1.4, that's f4.0.

But the unforgiving piece in every scene is the lighting. Nearly every room we worked in had a combination of fluorescent lights, each with their own unique color characteristics and light properties. The long, ceiling mounted tubes gave off a softer, greener light, with a mix of blue. The compact fluorescent bulbs in the recessed ceiling cans had a deep yellow cast to them. Mix them together and you've got a real Rubik's cube of a color puzzle to solve.

The worst set of problems come when you need to photograph a scene like the one above in which you are showcasing an MRI machine. An MRI creates a very, very powerful magnetic field which requires the room in which it sits to be shielded. It also means that any ferrous metal isn't allowed anywhere in the room. The magnetic field is strong enough to wipe out your camera's memory cards and can also damage both the imaging sensor circuits in your camera, as well as the electro-magnets that drive the shutters and aperture blades in modern cameras.

We could not put lights in the room and we had to shoot from just outside the door which isn't the best recipe for composing a great image!

Our strategy was to figure out the dominant light temperature within the room and then supplement, through the doorway and via the heavily screened observation window about eight feet to the right of the camera position. The overwhelming majority of the existing light in the room was about 3,000K with a small dose of green. In most situations (those without MRI machines to deal with...) we'd just turn off the room lights and re-light the room with flash, or our choice of continuous light. But turning off the room lights in this situation meant that the back half of the room would go dark, which would look unnatural.

I filtered a strobe with a 3200K correction gel and put the strobe into a 24x36 inch softbox, positioning it near the top of the doorway, about three feet above the camera. Then we took one of our battery powered LEDs, covered it with the same gel material and aimed it through the observation window. The combination did a decent job lighting our two techs and their "patient" but there is more we can do in post to enhance the photo. We'll select the people and get their flesh tones into a pleasing color range and then inverse our selections and balance the light in the room a bit more. But the filters and the additional light went a long way toward cleaning up a visual catastrophe.

During the day it became (once again) very clear to me that the lighting in situations like this is nearly always more important and harder to achieve than getting the camera gear right. In retrospect I could have shot all day long with one GH5 and one 12-100mm f4.0 zoom lens but over the course of the same day we used five different flashes and three different LED panels in order to get a natural and pleasing look to the light in each scene.

Had we brought a $100,000 Phase One medium format camera and no lighting we would have been much less successful. Color balance works the same across all formats. Mixed light nearly always needs to be corrected. With no lights and a super high res camera we'd have many highly detailed unusable files to play with. Conversely, I could have brought along that old Nikon D2XS and some ancient, manual focus Nikon lenses and, together with a box of strobes, could have done photographic work that would fit into the use envelope of my client, regardless of the media selected for final output.

Everyone seems to couch their shooting needs in terms of camera capabilities but in the commercial field it's generally lighting that rules the day. You can spend a fortune on a great camera and I'll concede that with the same lighting you'll make images that are fractionally better than images made with a lesser spec'd camera. The differences might not make any visual difference at all in most uses; for instance if the images are to be used on websites or inserted into video programming, etc. But for most of the work I do, which is profitable and fun, there is no need for fast frame rates, no need for super high ISO performance, and no need for spectacular resolution. There is always a need for good lighting even if it's just to clean up the lighting inconsistencies of a tough room.

We used a collection of cheap speed lights to do our work on Saturday. Nothing over $150 per light. All of the flashes could be sync'd to radio triggers or slaved from each other. Having five (an investment of about $700) meant I could put them in small places and add light to areas that needed more light without running cables. We use the lights in the same modifiers we've bought for our bigger mono-lights. Softboxes, umbrellas, diffusion disks; you name it.

One thing we lean on a lot is the intertwined use of LEDs with the small flashes. Most mono-light have tungsten modeling lights and when we need to drag the shutter in a combination flash and ambient light exposures used to make the screens on computers or the panel lights on machines glow correctly we get tungsten contamination in our daylight leaning shots. But it's nice to have a modeling light as a work light for focusing. It's common practice for us now to just grab a daylight balanced LED and bounce it off a ceiling, or even off the front end of the modifier we're using for flash. We get the focusing benefits of a modeling light and no color contamination of our mostly daylight flash exposure. Nice when it all works together...

During most of the day I worked the camera around ISO 200 and ISO 400. Using a smaller format meant I could use wider apertures and still get the depth of field I needed to get both techs, patients and machines in acceptable focus. All of our lighting units and modifiers fit into one, big rolling case and, since the battery powered strobes are small and light, we were able to use smaller, lighter light stands which helped us keep our overall footprint smaller and the overall weight load lighter.

Generally, on locations, the use of the camera is never a puzzle or mystery. Use the lens that gets you the composition you want and you are good. Lighting is a totally different story. Some rooms are filled with reflective surfaces that have to be tamed. Lights have to be placed just right for best effect, and all of it has to be balanced so nothing sticks out and beats our viewing audience over the head.

Think you need a kick ass camera? Think again; what you really might need are some kick ass lighting skills. Nine time out of ten it's the lighting that makes you the money.

At the end of the day we'd done 36 different shots (nine locations with variations in each) and amassed 1585 raw files. I can't think of a single shot on which I did not use at least two lights. Usually three or more. We edited the take down to about 600 and delivered the online gallery on Monday. This was our third day of shooting for this client in the last 30 days. We are scheduling additional shoots for this client in April. We must be doing something right.... maybe it's the lighting...


Posted by Kirk, Photographer/Writer at 15:33 6 comments: