An interesting solution for interior architecture. Use smaller format cameras....

I liked Abraham's (ODL Design) suggestion that I source an inexpensive Olympus EM-5.2 and use the hi-res mode in conjunction with the 8-18mm Panasonic/Leica lens to make very high resolution shots for my upcoming architectural photography projects. I have one modification that I'd make to his suggestion and that is to try the process with the Panasonic G9 as I like the finder better and it can generate equally large (or bigger) raw files.

The detail that remains to be see is whether or not the 8-18mm lens will actually resolve 45+ megapixels of resolution on the camera's very dense sensor.

I'm working on getting a test camera to see just that. Stay tuned and we'll see if we can't do a head to head comparison. Either that or I can just bag the whole idea of shooting architecture and keep making portraits. Might be a better use of my time.....

Portrait of Jill Blackwood as "Dot" in the Stephen Sondheim play, "Sundays in the Park with George." From the production at Zach Theatre in Austin, Texas. 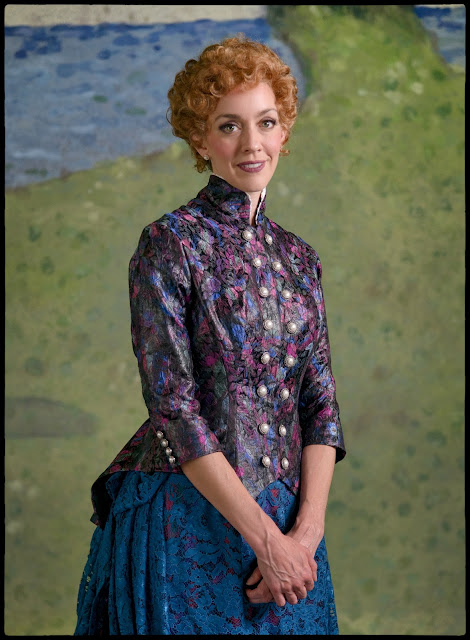 We were doing marketing photographs for the new play and we were warming up with with some individual portraits. Jill was my first subject of the day and she stood patiently as I fine-tuned the camera and lighting settings.  I've photographed Jill many times over the years and really admire her acting talent. And her tolerance of photographers who fiddle with their cameras too much.

Since we had a three camera video crew in tow I decided to light the stage and the set with continuous lighting to make the motion shooting easier. If I had used flash on the dark stage there's no way my skimpy modeling lights would have provided the right illumination for noise free video, and the video is a big part of ourmarketing push.

I set up a bunch of Aputure LightStorm LS-1 and LS-1/2  LED panel lights, some shooting through a six by six diffusion scrim on Jill's right and several more bouncing off multiple 48 inch reflectors on Jill's left side. There is also a "wink" light on the top of the camera just to add a little catchlight to her eyes.  Just a small and inexpensive LED panel...

The video crew did their jobs well and we are closing in on 20,000 views of their opus: Zach Sundays in the Park. Here is more information from Zach about their production: http://zachtheatre.org/shows/main-stage/sunday-park-george/

This is not one of the frames the marketing team chose. I use it here because it's one of the quiet moments in a shoot that is a photo of the transition to the next moment. It's just a quiet moment.