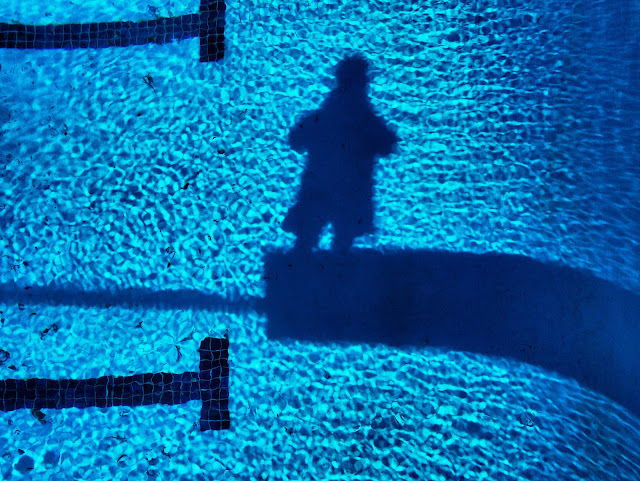 It was nasty weather here in Austin this past Wednesday. The incessant rain loosened some boulders which fell into the roads on HWY 2222 and also on HWY 360, shutting down traffic for quite a while. There were hundreds of low water crossings closed across the county. The rain came with its pals, cold and wind, and made most outdoor activities...uncomfortable.

I stuck close to home in the morning. I wrote a few letters, did some book keeping and entertained Studio Dog (who is not a fan of rain or thunder...). At 11:45 I put on my coat, warmed up the car and headed over to the Western Hills Athletic Club swimming pool.

It's a beauty; seven lanes, flow through lane lines, 25 yards, just recently renovated, and it's outdoors. The water is chilled in the Summer and nicely heated in the Winter.

I thought I'd see if we would be doing our regularly scheduled, noon, masters swim practice. A coached workout, midday, that lasts for one hour. I thought it might be lightly attended because of the weather and the holidays but thought I'd at least follow through on my intention to swim and show up.

As I got there coach Ian Crocker's group of high school (and younger) competitive swimmers were just wrapping up their workout. As they levitated effortlessly out of the pool their bodies were surrounded in steam. The difference between the water temperature, their body temperatures, as a result of their exertion, and the cold air temperature, made for a cinema-worthy scene. Cue fog machines... Endless swirls of steam.

I changed into my swim gear, grabbed a swim cap, goggles, a pull buoy and some hand paddles and exited the warm locker room into the rude embrace of the wet chill. I lost little time making it to the pool and leapt into one of the newly vacated lanes. I started swimming to warm up, though the water was a balmy 81 degrees (f).

When I'd swum enough to feel comfortably warm I stopped at the shallow end of the pool to see who might be joining me for the workout. There was no one else in the pool.

In fact, the only people in the vicinity were the coach and one of the pool's lifeguards. I felt a little guilty keeping them poolside in a freezing rainstorm and asked the coach if she wanted to call off the practice and go home. She declined and suggested that some stragglers might show up. The lifeguard was wrapped in a swim parka and parked under a wide umbrella in the lifeguard's chair. He needed to be there in case any lap swimmers showed...

The coach was bundled up and held an umbrella over her head. I swam every set she suggested and succeeded in getting a couple miles knocked out. At one p.m. I was finished and we all headed across the deck and down a short hill to the warm offices and locker rooms. As I stood in the hot shower, washing away the light, clean aroma of fresh chlorine I realized that I'd taken for granted that the pool would be open, staffed, ready, comfortable and available. I remembered a few years back when we swam on a day when the temperatures plunged into the low 20's and icicles grew on the starting blocks. We, as a group, never questioned whether the pool or the coaching staff would be available to us. It just was.

As I drove off to find a fun, engaging lunch I realized just how lucky I am.  To be in a warm, outdoor pool, midday, in a winter storm, supervised by not one, but two people, as I merrily knocked out my yards. No disruption in my casual schedule.

After lunch I went home to comfort my distraught dog. I spent the rest of the afternoon sitting on the couch, sipping hot coffee and reading Jason Matthew's fun novel, Palace of Treason, and occasionally contemplating my interesting day. Totally self-indulgent.

Now, if I could just figure out how to bill for leisure time I'd be set.
Posted by Kirk, Photographer/Writer at 13:33 5 comments: