Walking through the Blanton Museum with a "normal," prime lens on my Fuji X-Pro2. 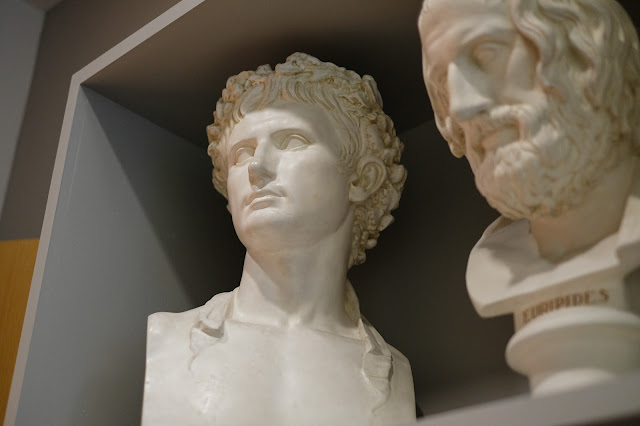 If I'm not booked on a job for a client on a Thursday I like to head over to the UT campus and spend some time at the Blanton Museum and sometimes the Humanities Research Center. Yesterday was hot and sticky and I think every potential client within 100 miles of Austin was either getting their kids ready for school or taking the week off to find a cool place in which to hibernate. That left time in my schedule (after swimming and napping) to give the Blanton a visit.

As you probably know, if you are a regular VSL reader, I've been cornering the market in Fuji X-Pro2 cameras lately. I'm convinced it's a classic and might represent the apogee of digital camera making in our time (give me a little leeway for hyperbole, it's the house special....).

I say that I'm cornering the market but what that really means is that I've managed to squeak together enough loose change to buy three used camera bodies. One looks brands new while the other two are scratch and dent free. I do like them a lot and I'm carrying one with me wherever I go. And recently I've been trying to branch out away from a myopic obsession with normal focal lengths to become more competent with semi-wide and even "classic" wide angles. To me this means the focal lengths from 14-23mm (which full frame translates into 21mm to 35mm equivalent angles of view).

But yesterday, with the heat and humidity clouding my usual endurance, I drew the line at the unfamiliar and the excessive and stuck with the Fuji 35mm f1.4 (classic) and used it mostly as a manual focus lens. The combination of the bright line finder aesthetic of the OVF and the ability to magnify a part of the frame to check focus makes the system (camera and lens) a different experience than either the mirrorless+EVF or the DSLR+OVF set-ups. The camera and lens, stripped of things like grips and flashes are actually small and light (everything in context) and even though I had to trudge four or five blocks through our heat storm the photo-gear barely registered its presence.

I chose the X-Pro2 and the fast 35mm as a bit of an experiment. The idea that image stabilization is a "must have" feature has permeated every part of the photo industry. I'm coming to believe that it's an addiction, like cigarette smoking and the reckless consumption of sugar. I was beginning to believe that it would soon become impossible for anyone to even make an interior photograph without the jiggling of a sensor or the wiggling of some lens elements. I wanted to see for myself if the era of film photography was somehow a magic moment in time during which all photographers were steady as rocks, all our lenses above average and all of our models graceful and thin because of something in the construction of those ancient cameras; or perhaps something that was or wasn't in the water.....

I used the camera as I would have used one of my film rangefinders; conscious of holding it still and steady, exhaling softly during the shutter press, even down to visualizing the proper stance for maximum stability. I also think that to hold a camera perfectly during the moment of exposure one should be free of distraction and conflicting desire. I think just having a live cell phone in one's pocket is enough of a psychological vergence in the Force to deflect attention in little microbursts in which one wonders if they've gotten a text from Gloria, a reminder from their calendar, a 'like' on their social media feed. Those small but acute and repetitive distractions pull away one's focus and interject a bit of discord in the clarity of seeing and the coherence of visualization. The small vergences interrupt the clear and linear process of engaging in the moment.  Same with a fat wallet wallowing around in one's back pocket, or the pressure of those gaudy sunglasses cantilevered across one's skull.

I find I'm at my best, when it comes to concentrating on photographic technique, when my only accessory at the time photographic engagement is a simple wrist watch. One with hands. But even that may shift the balance...

At any rate, I used the camera carefully and also left my phone in my car (and everyone else should too; I hate hearing inane telephone conversations in the middle of an otherwise quiet museum visit....). I used the lens at its widest apertures and chose logical, handhold-able shutter speeds like 1/60th and 1/125th of a second when making the images. Sometimes I could use ISOs as slow as 320 but mostly I kept the camera around ISO 800. That should be child's play for today's (or even yesterday's) sensors.

So, how did I do? Well, I posted some images from my visit here: 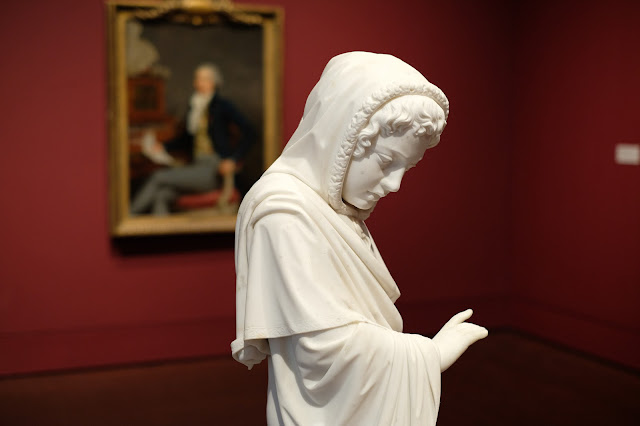 I was able to examine each frame at 100% and I think I did pretty well. Actually, I think the camera system and I worked well as symbiants. The lack of "shutter shock" and a well implemented shutter button went a long way toward keeping the camera's vibration minimal. The bright line finder was useful in composing as I was able to see what was outside the frame and what really needed to be inside the frame. The bright lines also acted as a steadiness guide because I could gauge hand movement by the relative movement of the bright lines to the subject(s). The less "jump" I got between the lines and a reference point on the subject the less image degradation I got. 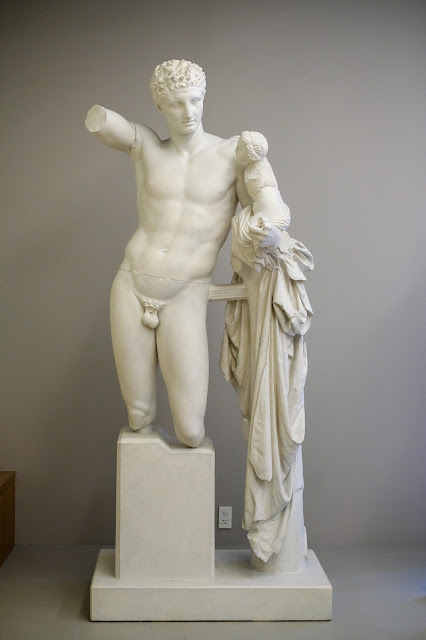 What I found in the end was that photographing without image stabilization is entirely possible. It's possible even without a tripod. I feared that decades of caffeine saturation, and long nights editing in front of a computer screen, would have inflicted more damage to my ability to hold stuff steady but it wasn't the case. That said, I think my days of hand holding an unassisted 1/15th of a second with a normal lens are long over. But I was never that good at those kinds of speeds anyway. 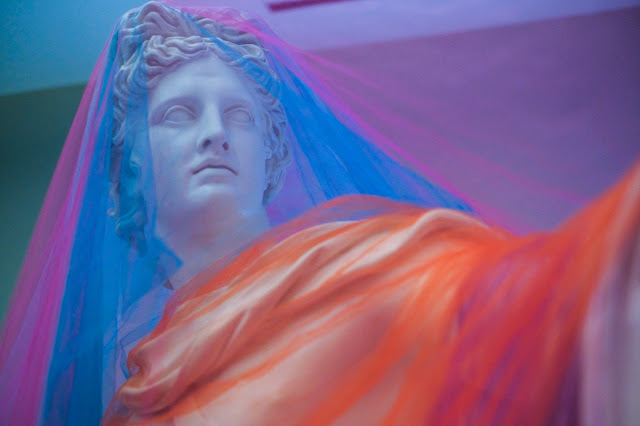 An artist covered one of the large, replica sculpture casts with very thin color
fabrics to make a statement that art historian can vouch for; that original Greek and Roman statues were polychromed and painted when they were created and our perception of
white marble statuary as being the normal state is not so. It's a result of centuries of wearing and fading away of the colors..... 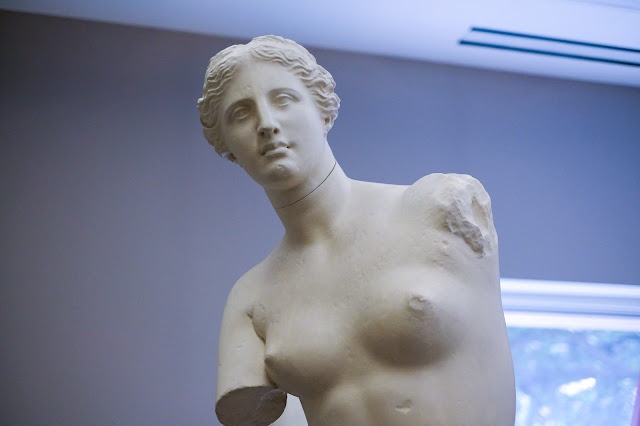 Tungten-esque light on the front of this statue combined with daylight through yonder window mostly means that one must take the reins of control and make a conscious decision as to whether you'd like a warm, yellow statue or a correctly colored statue in a room filling up with blue light. 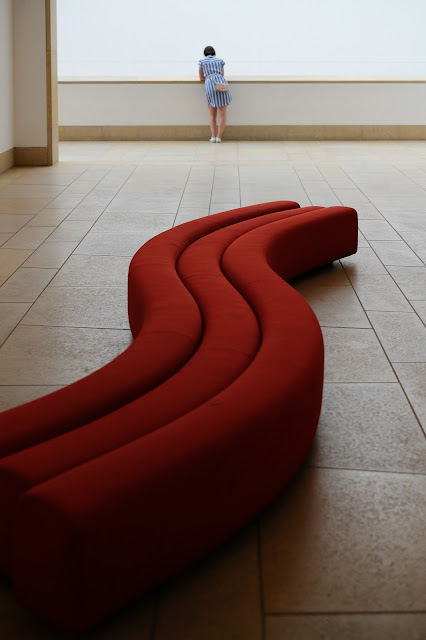 Two versions of "Woman With Striped Dress, and the Saturated Red Seat." I could not decide which I liked better so I included them both. I should have requested that this person walk all through the museum with me, standing just so and just enough out of focus in the background of every scene. It would make a nice variation on the usual, too serious images from the museum.... 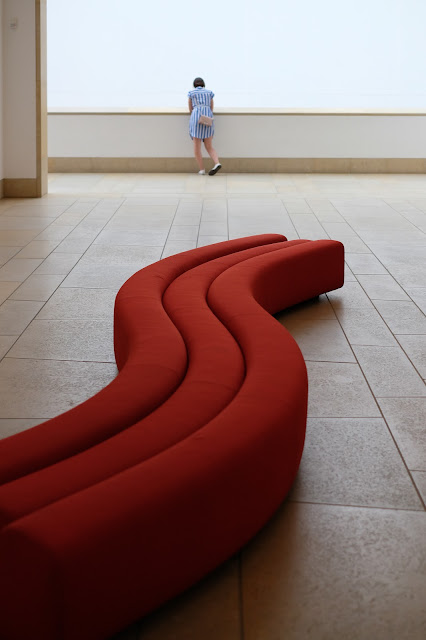 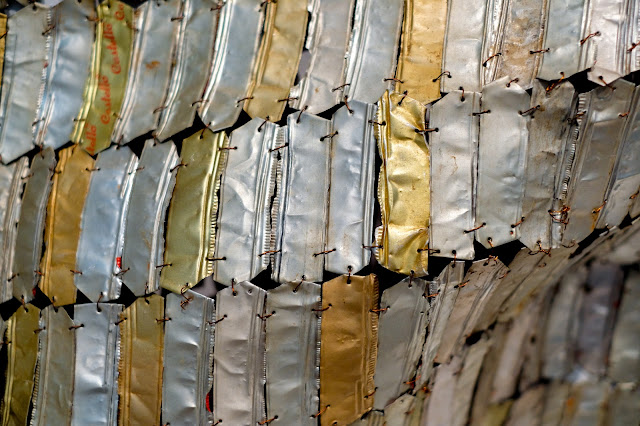 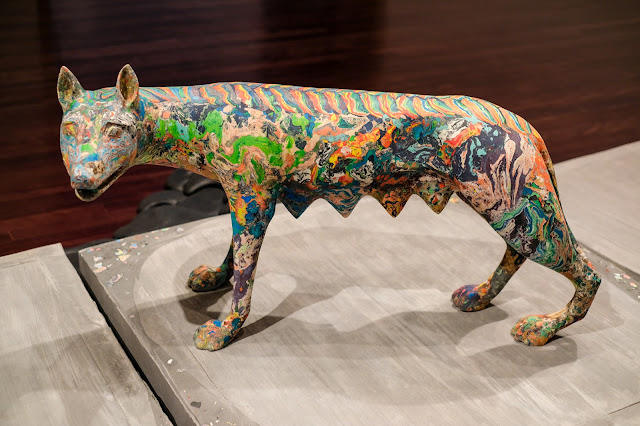 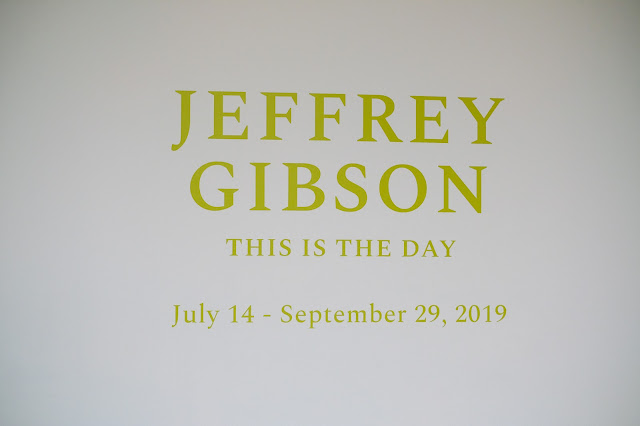 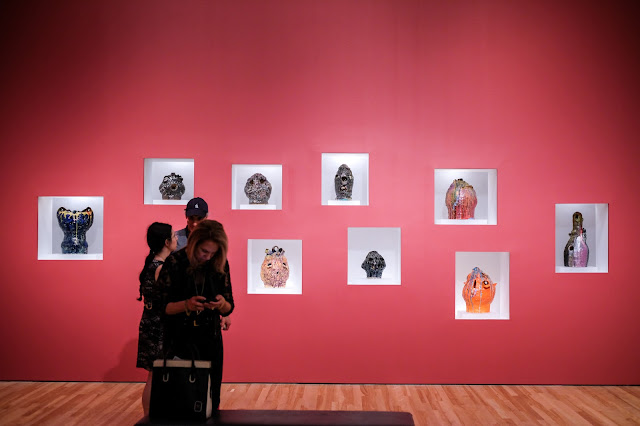 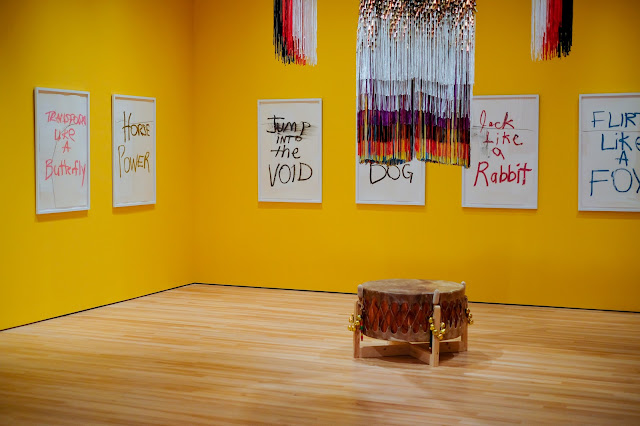 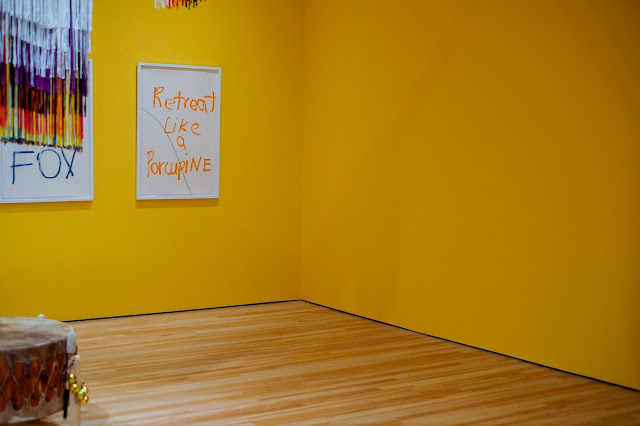 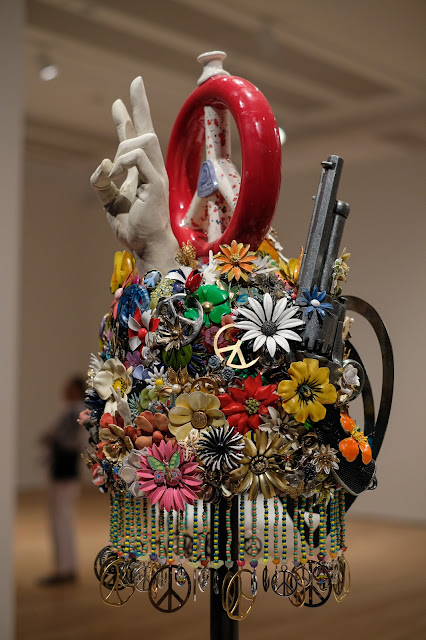 The same kind of conundrum as with the woman in the stripped dress. Does this collage of objects work better in the photo as a standalone object or does the out of focus person in the background add a contrast between the sharpness of the detail and the soft and ephemeral image of that person? 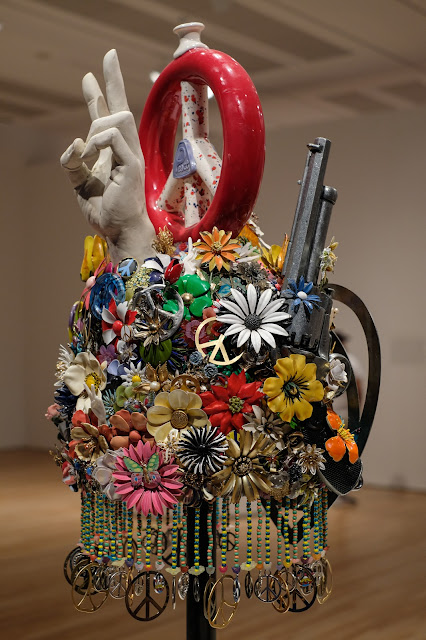 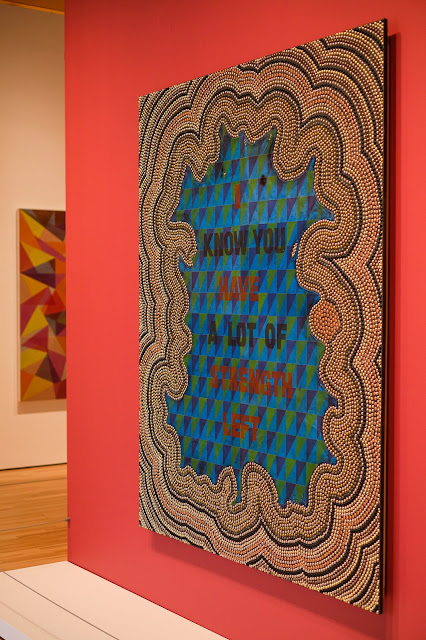 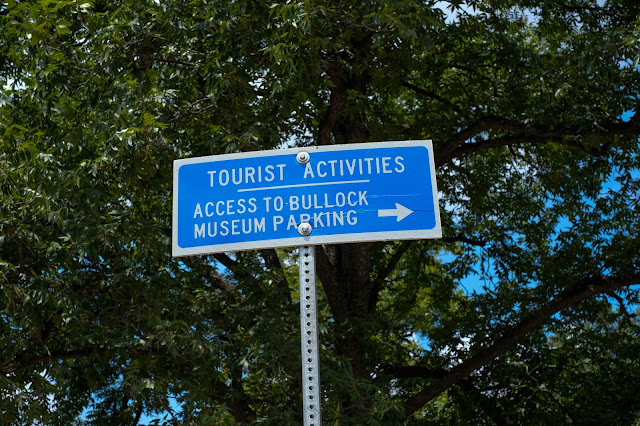 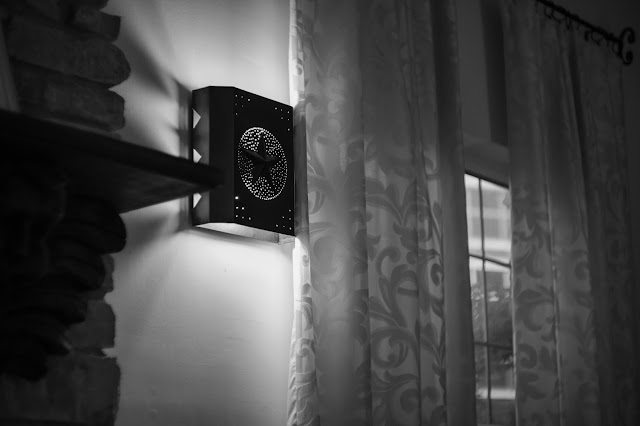 This image is not from the museum but was a test shot in my living room.
I have these sconces on all the living room walls and I use them as targets when playing with lenses prior to a shoot. Yesterday I was using this one as a target for the Kamlan 50mm f1.0 on the
Fuji X-Pro2. It's actually a sharp lens in the center, if you get the focus right. 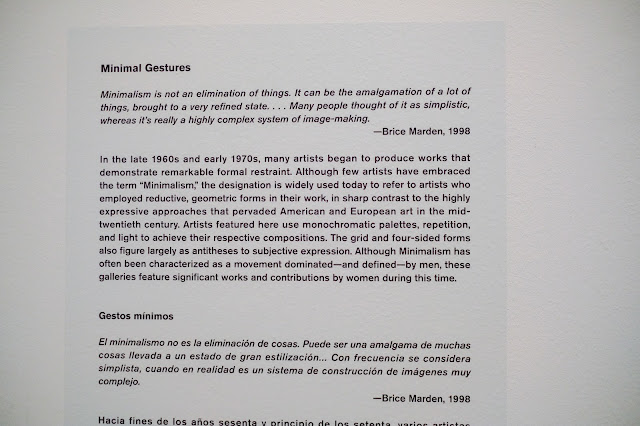 Finally: One man's idea of minimalism.

I love the museum. It's filled with fun things to look at,  powered by sometimes goofy ideas.
But even the goofiest of ideas is important.