OT: today was a chilly, exuberant, happy, rainy swim. You should have been here... 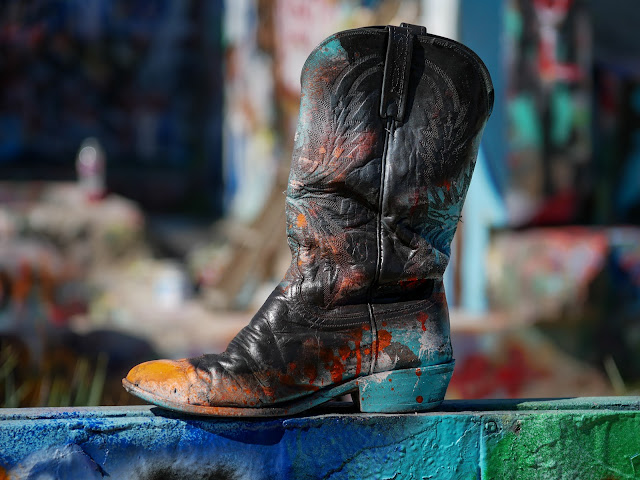 Random Boot Shot. Texans love their boots, but no, we don't wear em in the pool.

When I woke up this morning there was a consistent but light rain falling, nicely blended in with gusty breezes that wiggled trees and shook more water off the leaves. Groggy and sleepy I walked down our long hall to the dining room to check the weather on my phone. I couldn't find my phone so I grabbed one of the MacBook Pros (which seem to be reproducing all over the house) and looked there instead. It was 42 degrees outside and the prediction was for rain and gusty wind through the day. I pulled on a warm sweatshirt, grabbed a medicinal cup of instant coffee, with lots of milk, pulled a towel from the clothes dryer and headed out the door.

The car windows were slathered with rain on the outside and started fogging up inside the minute I got in and closed the door.

I got to the athletic club in plenty of time, changed in the locker room, and stoically began the cold 100 yard walk to the pool. Goggles, swim cap, hand paddles and pull buoy filling my hands the same way groceries do when I run in to the store just to "grab a few things" and resist taking one of the little baskets to put all the stuff in.

Our pool is outside but we heat it with gusto. It was too hot today. The coach told us that it was 83 degrees. A good, competition pool should be around 78 but we've got members in other programs that don't move fast enough to stay warm in the cooler water, so we adjust...

Jimmy was our coach and he loves to author swim practices that are filled with repeating patterns at different distances.

Warm-up started with a 600 yard swim that was set up to be 150 yards freestyle swimming + 50 yards of any other stroke. Then a 400 yard swim that was set up to be four 75 yard freestyle swims interspersed with 25 yards of kicking. Then five 150 yard freestyle swims on a tight interval followed by a 100 yard sculling drill, followed by 4 x 25 sprints. Then back to five 100 yard freestyles followed by the same 100 sculling drill, followed by 4 x 25 yards sprints with no breathing on the way down the lane and two breaths coming back. The pattern repeated and repeated. We ended up knocking out about 3400 yards and we were coasting in to the end when one of our swimmers suggested that we put on fins and do a set of five shooters.

Shooters are 25 yards underwater, pop up at the wall, then swim back. Doesn't sound difficult but at the end of a longish workout I find it a bit challenging to swim five lengths of the pool underwater as part of ten lengths total; all on a 60 second interval. You might too.

The hardest part of the workout is getting from the nice, warm pool, out into the 42 degree wind gusts and making it to the locker rooms without freezing. Ah, thank goodness for hot showers.

In other news, I pressed my Sigma fp into service shooting a portrait in the studio today. It worked well but it's too quiet. My subject didn't know when I was hitting the shutter and when I wasn't. No aural cues. We'll all get used to it. At least the files looked great.

On the Sigma fp front: my Samsung T5, 1 terabyte SSD arrives today so I can start shooting some raw 10 bit video tests first thing tomorrow. I have a suspicion that the drive will fill up quickly. I just checked and the files are about 2,000 mbps... Ouch.
Posted by Kirk, Photographer/Writer at 14:59 4 comments:

What's the use case? How will "supreme performance" translate to your actual target? 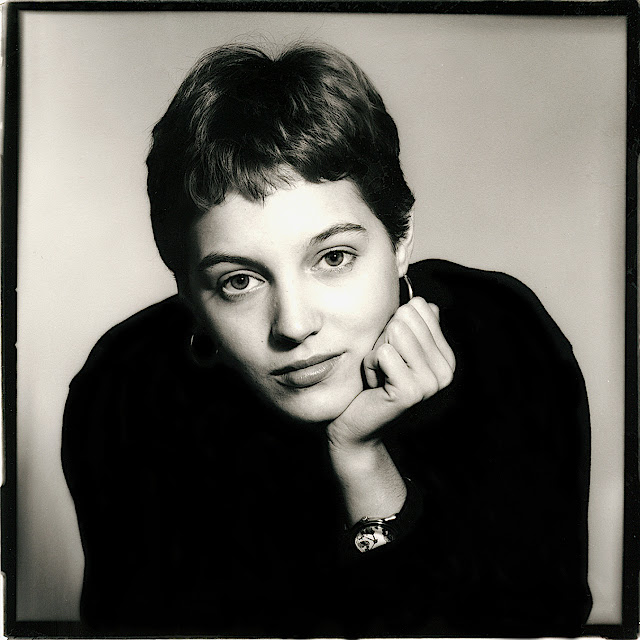 Moving back to the future...

I have a friend who is a battle-scarred corporate videographer and he's always searching for the "perfect" camera. Over the years his idea of what constitutes "perfect" has become more and more of a slippery moving target. And, over the years, his final use of much of his video has transitioned from broadcast and large tradeshow presentations to smaller screens that are less technically demanding.

A few years back we had discussions that circled around whether the Arriflex video cameras were that much better than Red cameras and, if not, what were the tradeoffs between the two. Reds overheated while Arriflexes were frighteningly expensive.

As web video grew and broadcast became ever more specialized the discussion settled in to be about cameras like the Sony FS-7 and its various competitors. Now he's decided that gimbals and constantly moving cameras are all the rage and he's jumped in with both feet; but that's where his hesitation comes in. He remembers the need for all the heavy duty stuff that came along with topflight cameras (really good audio interfaces, SDI connectors, built-in scopes, endless fine adjustments to file parameters, and the really good stuff like 10 bit files and more color information.

But as assignments change and become less resource intensive he's become more and more of a one man band on many projects and putting a giant camera like a Red or a Sony FS7 on a gimbal isn't practical. Now he's looking for the same video gingerbread he's used to but in a package that's easy to float on a gimbal. That means that he, like nearly everyone else, is looking at the Sony A7 series cameras. The final decision on what to use is fraught with compromises.

In still photography we face the same kinds of prejudices. We come from a time when it was really tough to get affordable cameras with more resolution that 24 megapixels so we reflexively reach for the cameras with the most resolution we can buy...even though our use for the cameras as well as the final destination for the files usually argues against that strategy.

We (collectively) are constantly adjusting between our tools and our targets.  Between our irrational consumer demands and the actual needs of the work.

I have always be partial to camera bodies but I'm finally coming around to how much of a difference lenses make versus most improvements in sensor tech. I can see differences between less expensive and less intensively designed lenses and their pricier counterparts. As I spend money on the more expensive options I'm constantly wondering if the results of the better lenses will be obvious in my work when it's viewed on screens of various sizes.

What I'm coming to grips with is that I can see the differences and whether or not these improvements are visible to final clients and audiences I've falling prey to the idea that once you've tasted the good stuff it's hard to trim the budgets and go back to the less expensive models.

Since I shoot a variety of assignments I've convinced myself that while a $2300 50mm f1.4 will not generate results that will make audiences gush when viewing stuff on their iPhones we still do enough lifestyle work that sometimes gets used in large print graphics and that's where the differences in optical quality will show up.

I had coffee with my videographer friend. I think he's had enough success with a Sony A7iii on a gimbal to get comfortable shooting 8 bit video files. For many of his projects the 4K files at any bit depth are overkill. Now he's looking backwards and gauging just how good cameras can be at 1080p. How retro! But, in fact, it makes the entire workflow chain easier for him and faster for his clients.

I guess the important consideration is to match the output of your main device to the demands of your creative target. Get what works for 80% of the workload and plan to rent stuff for that other 20%.

If you have not already bought a larger monitor that does 4 or 5K resolution you might not know how much of an improvement stepping up the quality of lenses can be. I'm stunned when I start comparing material I shot with older lenses against work I'm making with much better lenses. I might need to slow down ( a lot ) on new body acquisition if for no other reason that to free up resources for better "glass."

The new (to me) Panasonic 24-70mm f2.8 Pro S lens is an eye opener for me. I didn't think it would be that much better than my 24-105mm or the lenses I shot with just a few years ago but comparing them on an improved monitor shows so much more different than I expected.

I guess we'd all save time and money if we were more rational in our purchasing. Trying to be ready for everything is that moving target I mentioned. Get everything just right and some one will invent an 8K television that's wall sized. Then we'll all be aiming to deliver into that. It's just a matter of time....


Posted by Kirk, Photographer/Writer at 13:34 4 comments: