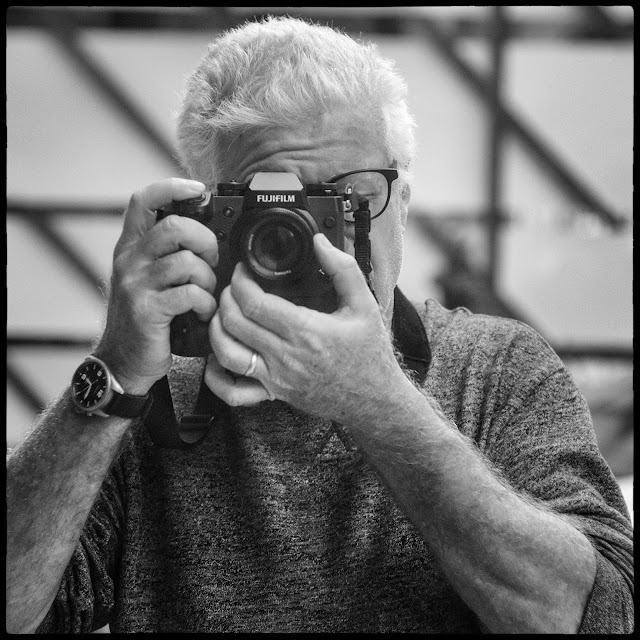 Interesting to me that three of my good friends (who are also photographers....but I guess that goes without saying...) have recently added Fuji medium format cameras to their collection of toys and tools.  One is my friend, Paul who is a very experienced architecture photographer, the second is a very advanced enthusiast named, Andy, and the third is an eclectic and self directed art photographer named Jim. All three had their reasons for giving medium format a spin and all three of them are happy they decided to give new Fuji line of MFs a whirl.

Paul, the architecture veteran, is always looking for an edge and he's not a newbie when it comes to large and medium format cameras; both digital and film based. When I first met him Paul was working with Linhof Technica 4x5 view cameras while keeping a Hasselblad SWC/M handy for quicker wide shots. He's worked recently with the bigger Hasselblad digital cameras as well as the Leica S medium format cameras so he knew what he was getting into when he bought a Fuji GFX 50R.

Andy is nearly as crazy about collecting various cameras as I am and his purchase of his GFX 50R was, I think, his first foray into medium format digital imaging. He picked up the basics in a matter of hours and has been using the 50R non-stop since picking it up a few months ago. I've seen plenty of samples from his work with the camera and he should be a spokesperson for Fuji. He's got that enthusiast's enthusiasm especially hard for the medium format space. All his stuff looks great. (And he's reviving his appreciation for his tripods).

Jim is the anything for art and all-in member of this loose coterie. He sprung for the GFX 100 (100 megapixels) and three of the lenses and he's become a bit zealous about how much he likes the bigger format. From the west Texas desert to the Colorado mountains, he seems to drag that kit around with him everywhere. It's a change from previous years when I could always count on him to show up with everything and anything Leica.

But what all three have in common is that they are generally in the first wave of adapters for camera technologies that make a difference in the actual look of the images they create. They aren't necessarily waiting for the reviewers to give them a sign. They are willing to adapt without the safety net of the herd to bolster their resolve. And they each deeply love making photographs.

So why the sudden lunge toward medium format? (Or, in Paul's case, back into MF).

In each case I think it happened when Fuji took all the goodness of the 50 megapixel sensor that appeared in the Hasselblad HD1X and the second generation Pentax 645D and put it into a system that is rationally affordable. In the case of the 50R when the price for a body started dropping down to the $3,500 price point it entered a dollar-to-value zone that made it irresistible for photographers who wanted a different look than what they (and everyone else) were getting from the 35mm sensor sized DSLRs and mirrorless full frame cameras.

In the case of the 50R the user is getting a sensor that's about +50% bigger than the 35mm models which translates into bigger pixels, which generally means a nicer looking file. But since the tech is based on the same underlying magic across sensor format sizes one still retains all the high ISO performance of the current smaller format sensors. And, unlike Hasselblad and Leica medium format cameras the lenses you'll want to use on the Fujis don't require selling a kidney on the black market to come up with enough money to purchase. I find the Fuji lenses bordering on affordable. The second part of the equation that really works for Fuji is that they quickly fleshed out the lens line up and did so with lenses that have a lot of appeal. I'm still salivating over the 110mm f2.0 lens. Oh, and the 45-100mm f4.0 lens. Even Mitakon makes two lenses for the system; a super fast 85mm f1.2 and a super fast 65mm. And I can't imagine a portrait photographer who wouldn't be at least mildly interested in the 100-200mm f5.6 zoom for a bit less than $2,000.

They've moved quickly to introduce lots of perfectly thought out zoom lenses as well as a collection of wides, normals and longer lenses. Venus Optical (third party) makes a 17mm for about $700 that's supposed to be good and is the equivalent of a 13mm on a 35mm system. But if you just want to get your feet wet with a pancake style "normal" focal length Fuji makes a 50mm 3.5 (a 40mm equiv.) for a hair less than $ 1,000.

Compare that to the Leica S series MF lenses and you'll find you can by three Fuji lenses (or more) for the price of one German marvel. That wouldn't be as exciting if the Fuji lenses were crap but by all reports from knowledgeable users the Fuji G lens are quite sharp and perform well. And the autofocus is decent. Both from a speed and accuracy point of view.

The EVF finder on the rangefinder style 50R body is one of the 3.69 megapixel versions so it's nice and detailed. And, if you travel a lot for your photographic work (does anybody do that anymore?) the body is currently cheap enough to make a second, back-up body nearly practical. (Not so practical if you are addicted to the 100 megapixel GFX100 version = which is still hovering around $10K. But then again....100 megapixels!!!).

What do I think? I think if the pandemic hadn't shut down my entire 2020 fiscal year's business income I'd find the $3500 price tag for the 50R body, and the $2,700 price tag for that slick looking 110mm f2.0 a very reasonable and highly justifiable purchase. I might still find them to be so.

But for my own stuff, in the moment, the S1 and S1R cameras are filling the bill. When the first green shoots of new business sprout, or when that lucky lottery ticket pays off, you'll probably find me in line at B&H or Precision Camera waiting for the 50R to come off back order. Yes, "back order" in the midst of the camera industry meltdown. Fuji must be doing something right...

My friend Paul likes the camera for its files but he's equally engaged by the short lens mount-to-sensor plane distance that allows him to adapt and use a vast collection of medium format shift lenses from previous, much more expensive camera systems. He's becoming a master at adaptation. Especially with shift lenses. Maybe he'll step up to the 100 megapixel GFX100 after he sees some of Jim's work with that camera. Then he might need to get rid of the 50R. I know someone who might willingly take it off his hands. I wonder if I can adapt some old Hasselblad V lenses to it.  You never know...