Troubleshooting stuff that goes wrong. Don't be so quick to blame the camera. If you are using flash it's probably your ________!!!!! 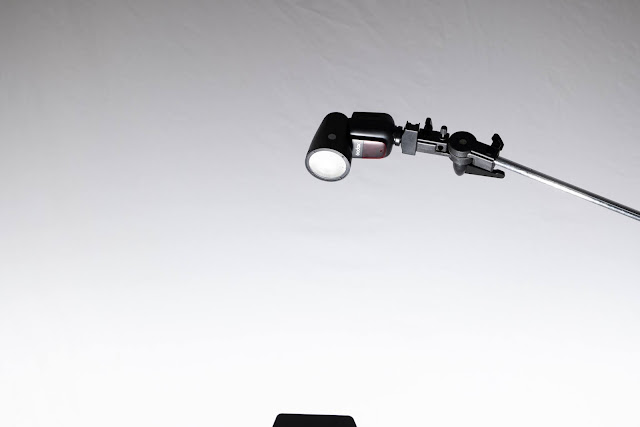 Notice how the top half of the frame is darker than the bottom half?
When I lit the scene and metered it with a Sekonic meter
the whole background was evenly lit to half a stop.
What went wrong?

And who's to blame?

As you may know, in addition to my full time, unpaid job, as a volunteer photoblogger I also do some professional/commercial photography on the side. You know, just to pay the bills and provide a budget to pay for canned tuna fish and ramen. So, in my capacity as a working pro I accepted the amazing challenge of photographing not just one, but two doctors this morning. We set up the appointments an hour apart so I could do mundane things in between, like wiping down doorknobs with Clorox wipes or re-brushing my teeth so I wouldn't have to live with coffee breath recirculating in my face mask...

But even though I've been taking these kinds of studio portraits for a number of years, and should have some sort of competency in both setting up the gear and getting my subjects to flash winning smiles, I'm  not so complacent that I'd wait till the last moment to set up and test the gear. Yesterday evening, between watering the grass and settling in for yet another one of Belinda's ultra-healthy dinners, I decided to head into the studio and set up all the lights, the background and the camera and then test everything a couple of times. I tend to sleep better that way.

When I got everything ready and started to test the images on the rear screen looked fine...except they didn't. One half of the frame was noticeably darker than the other. Yikes. Okay. I've done this before. I'm sure it was just an errant camera setting.

My first thought was about the lights. I was using two Godox monolights. The kind you plug in the wall. The kind with big modeling lights. While they tend to be binary they were part of different lighting method than I've been using in the recent past. I had been using Godox LED lights and never had a problem like this. Could it be the lights?

I switched them out with a second set of lights, turned everything back on and did a test. The issue was still there. It was unchanged. Uh oh. Might be something wrong with the camera! I was using a Panasonic S1R. It's one that was thoroughly (and I mean thoroughly) checked by Panasonic just a few months ago and it was working fine all last week. But you never know....

I went through and checked the shutter speed setting for sync problems but the phenomenon was unchanged. If it was the camera I would be pissed off but for the moment it would be an easy problem to solve. I'd just pull a second one out of the drawer, put a piece of tape on the broken camera and get on with the job. But to my horror the second camera showed the exact same issue. Half the frame graded to darkness. Well shit.

With my platinum strategy, the camera switch out, not working I was starting to get a bit nervous. I should be able to make a simple photo set up work. I've done it....forever. My next step was to go through every single menu item on the camera to see if I had set anything, ANYTHING that might affect the flash. Two trips through the menu and I still came up empty handed and saddled with a very annoying enigma.

While logic told me the lens couldn't possibly be the issue I reached into the magic studio drawer and pulled out another lens. It showed the exactly same messed up frame as before.

In scary times like this the options seem so limited. What to do next? Call the client and reschedule? Quit the profession in shame and embarrassment? Shoot with a half dark frame and try to get away with calling it ART?

No. A true master, like Richard Avedon, would have stepped away from the situation, gotten a cup of coffee and tasked his team of assistants to figure out the issue or face banishment.

It did dawn on me that I have no army of assistants onto whom I could foist responsibility but I'm always up for a cup of coffee so I headed all the way downtown to Intelligentsia Coffee to get a double cappuccino. Sure, I had to pass sixty or seventy closer coffee shops to get there but it's really all about the journey. The longer the journey the more time your subconscious mind has to work on the issue.

I got my coffee and headed back home. I was waiting for the coffee to cool down before taking that first sip. When I crossed the bridge over the river I thought enough time had gone by and I took in that first tentative slurp of perfect coffee. And then, like an electric shock violently tickling my medulla oblongata, the solution came to me. Fully formed. Springing like Athena from the forehead of Zeus. Maybe it was the dedicated Godox X1T flash trigger!

My right foot hit the accelerator and the incredibly dynamic Subaru Forester sped up from a pokey 35 miles per hour up to a death defying 43 mph as I rushed home to get to the bottom of the exposure
crisis.

I grabbed a big, theatrical looking magnifying glass and examined every square centimeter of the triggering mechanism; paying special attention to its infernal interfaces, and: there it was. The last untested possibility. The high speed flash sync enabling switch, or THSFSES!!!

It was set to allow high speed flash sync. A totally unnecessary setting given that the monolights were in the studio where the ambient light is totally controllable. I took another swig of coffee, took a deep breath and flicked the switch to the "off" position. Then, with trembling hands and no small dose of trepidation, I turned everything else back on and took a test shot. Voila! Success. A completely coherent and even white background. I had conquered the last Everest on my list. The flashes would now do my bidding with no further wobbling or subterfuge.

I finished my coffee with a triumphant flourish that only served to spill precious brown juice on the studio floor. But after I cleaned that up I knew I'd be able to complete those two assignments and I would still be able to hold my head high as a nearly fully functional photographer. And that's my story.

Next time I'll check the trigger first. Apologies to my big, fat Lumix S1R. It's not your fault, it's me.
Posted by Kirk, Photographer/Writer at 15:09 7 comments: