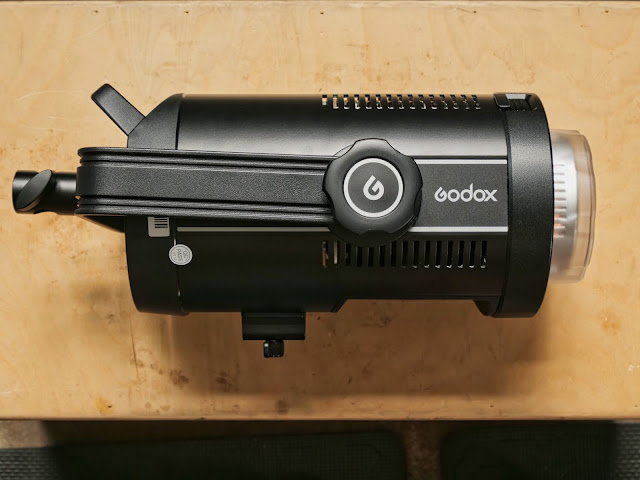 This is the heavy, rugged and highly desirable (by me) Godox
SL150 ii. It's a COB LED light with features.
Daylight balanced. 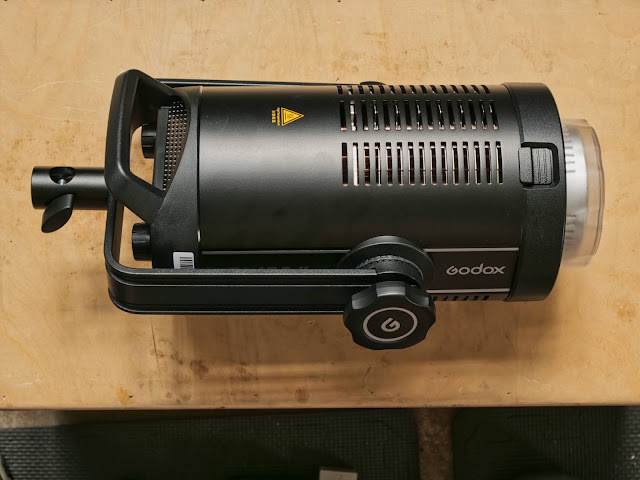 Obviously much attention was paid to cooling. Note the vents on the all metal chassis. 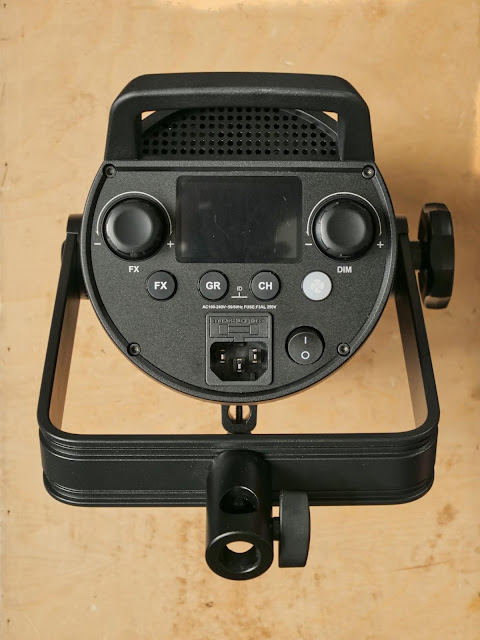 The back panel is straightforward and has a special button (the white one)
that changes the power ranges to turn off the fan. It also comes with a very
simple remote control that only turns the output up and down. 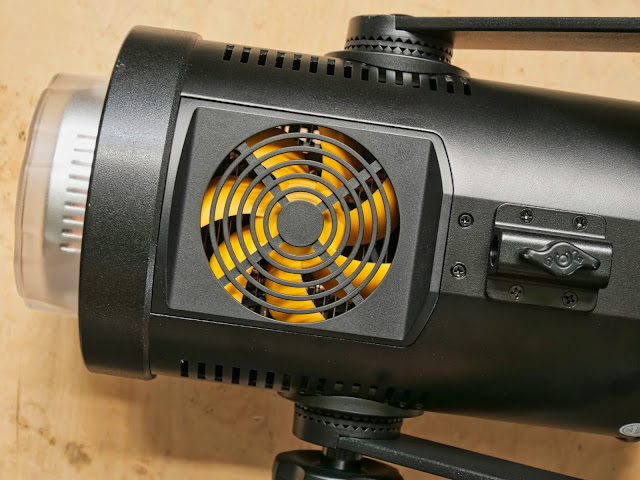 The importance of doing fun stuff. 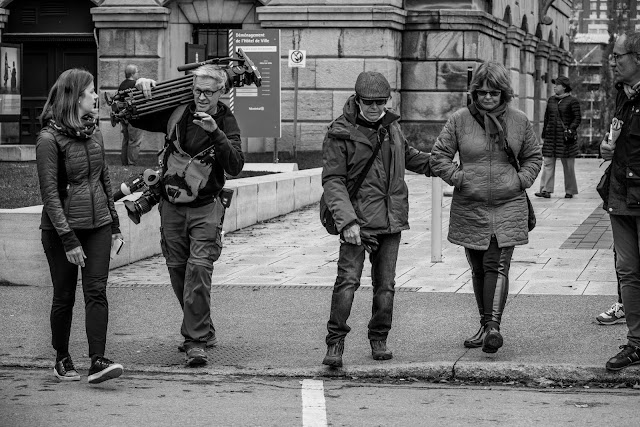 I saw this videographer crossing the street in Montreal. He had a great smile.

Okay. So I'm officially having a fun August. I'm learning to take things one day at a time and to do something I consider "fun" every day.

My first choices are always to swim and take photographs. Sometimes you have to punt when you can't do your first choices. I guess the secret is not to hold on too tightly to those priorities.

Today I woke up to booming and crashing thunder and lightning (and some very, very welcome thrashing  rain!). I watched the clock with one eye and the weather with the other and as the minutes clicked by I came to realize that I would not get to swim practice this morning. A bit of a let down since this would have been my first Saturday morning masters swim workout since the dawning of the pandemic shut down. But it's hard to argue with minute-by-minute lightning strikes...

I made a cup of coffee and walked out onto our back porch, sunk into an Adirondack chair, looked over a small forest of trees and enjoyed the smell and coolness of the rain in the early gray of the morning. Except for the occasional peel of thunder it was a soft and quiet way to wake up with the day.

I'm booked on my video project tomorrow morning so the next swim will be on Tuesday. That's okay. I was a bit sore after four in a row...

Now it's midday and the sun is out. The temperatures are still in the 70s. What a fun afternoon this will be for a long, long walk with an eager camera. I have no plan or agenda for the walk other than to get out and feel the weather on my skin and to see what my city looks like with its ozone creatively rearranged by nature. That means I'll probably take along a less than serious camera. Probably a Canon point and shoot.

If I get out in time I'll make sure I plan my route to slip by one of my favorite coffee shops for a toasty cappuccino. Because that's fun.

But before I head out the door Ben, Belinda and I will have our traditional Saturday lunch together. Last time I was in the house I got the distinct impression that we'll be having burgers and fries from P. Terry's. Almost healthy fast food... When we get our chow we'll sit around the dining room table and talk about all the different things we're up to and laugh and kid around with each other. Later, I'll circle back to my job/hobby. My "Jobby"?

I always couch my purchases of things like monitors and lenses as necessary for the execution of the business but the reality is that I love how some of my equipment can make photos and videos look so good. I've been making video for Zach  Theatre using the Lumix S1 with the 10bit/422 upgrade and it's been looking great. I did a cursory look at footage we shot on Wednesday right after we shot it, just to make sure we had the basics covered.

But this morning I had time to bring it up on the 5K screen in Final Cut Pro X to see what we "really" got. I had such a contentment rush. The footage looked incredible. We shot video of a beautiful and talented Zach dancer in the parking lot of a grocery store, early in the morning. I won't go into all the details but the story line is that as she walks up to her car to stow her groceries she hears the lyrics to Dancing in the Street. Our dancer starts moving to the rhythm of the song and then breaks into a full on dance. (Sponsor's grocery bags with prominent logos in the background).

I had such a feeling of satisfaction today when I really looked at what we'd created. The acting and the motion of the dancer was so natural. The video stuff was just about perfect and the feeling of happiness as expressed by our actor/dancer felt so genuine. I'd worked in enough video sessions in the week leading up to that scene that my camera holding looked steady and I followed my actor perfectly. The color balance (hey!!! do a custom white balance!) was on the money and the exposure was airy, open and still clinging to every last highlight (although I would have been happy to let the bright spots go, if I had to).

So, in the moment of looking at the footage (and making sure it's backed up in three places) I felt like "fun" had come home to roost in my office once again. Now I'm looking forward with a certain giddiness to the next video shoot.

That would be this evening. I heard the pre-professional kid actors would be rehearsing this evening for their part of our upcoming production. The rehearsal will be outdoors and I want to catch some great incidental shots that we might use in the final piece (also called: B-Roll). So I asked if I could attend with a camera.

Since I have a new Ninja V digital recorder and monitor I'm excited about switching gears, camera-wise, and using the Sigma fp for a change. I've got it encased in a Smallrig cage so I can anchor the Ninja monitor right on top. I'll be recording the 10 bit raw files (24 fps) directly to the Atomos Ninja and bypassing the need to write the raw files to an external drive and then transcode them. I can't wait to see what kind of color I can get and also how minimal I expect motion artifacts to be. But most of all I want to capture the expressions, gestures and energy of the dancers. I want to see kids having fun making art.

Tomorrow is another early morning of video shooting with three or four locations scheduled before noon. I'll be back on the comfortable camera (familiarity brings serenity when it comes to some gear) tomorrow but I'll still be digging in to the Atomos.

But I'll drive the director a bit nuts because I also intend to bring along my new phone gimbal to try out.

Fun means so many different things to so many people. To me it's being able to do something extra and unencumbered to generate...satisfaction. Creating is fun. Family is fun. Projects that have a good heart and nice goals at their center are fun. And yes, of course, playing with really good gear is fun. Swimming is fun but so is watching movies on the big couch at home with Belinda. And fun is that great novel that's sitting there, bedside, patiently waiting for me to read.

That guilty Snickers candy bar I munched on this week was fun. Getting back to work is a lot more fun that I remembered.

Being up and out and alive and engaged and surrounded by love and happiness is so much fun it almost feels dangerous. Just what I'm thinking about on a Saturday while waiting for the rest of the family to get hungry. 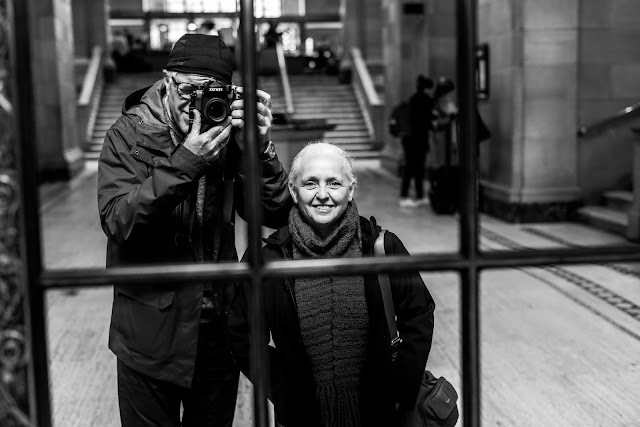 note added: Ben just came out to the studio to take my lunch order. Looks like I was right. It's burgers and fries. I did make one nod to "healthy eating," I asked if they could make my burger with a whole wheat bun. That ought to make everything okay!

Posted by Kirk, Photographer/Writer at 12:44 2 comments: