It was a friendly, f2 sort of day. An interesting exercise to try if you are more interested in walking than getting the perfect photo. 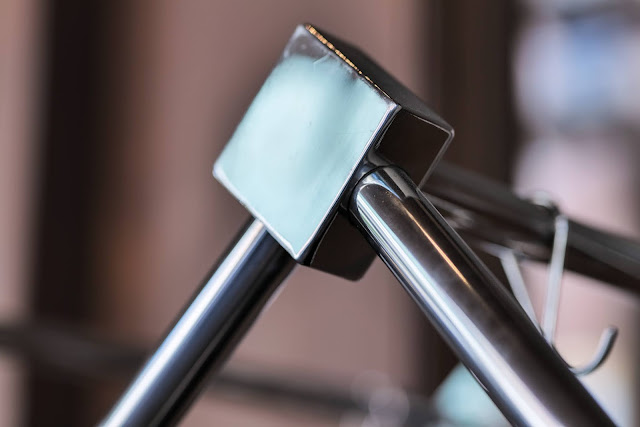 I walk a lot because it's fun but also because daily exercise is emerging as the #1 "miracle cure" for a long and healthy (and happy) life. I walk, in addition to a daily swim workout, because it's a weight bearing exercise. And that's a good thing. Add a Lumix S1R and the Sigma 85mm Art lens to your walk and you can also add it a bit of resistance training for your biceps and wrists. But the best reason for me to walk through Austin is to stay in tune with the feel of my city.
Yesterday, just for fun, I decided to take along a heavy camera and a big lens. The S1R and the Sigma 85mm seemed like just the right combination. But to make things more interesting I decided to add a restriction to my photographic approach. I decided to spend the entire walk with the lens set to f2.0. I thought it would be fun to restrict my options and see what the rig was capable of with the lens nearly wide open.
I think that as we get more and more experience in our photography we forget the "happy accidents" of the early years. We learn dogma about lens quality and optimum apertures that might make our images sharper but more...boring.
I was thinking about this as I went through a box of old black and white prints from a time when films were slow and lenses weren't nearly as good as the best ones are today. I found a bunch of images from the middle 1970's that were shot with a Canonet QL17 rangefinder camera and remember that I shot a lot of pictures of people inside buildings, houses and dormitories; places that had low light levels. This meant that most of the time I was making photographs with my camera set to f1.7 (wide open) since my fastest film was Tri-X rated at ASA 400.
If you think about it a lot of the images from the period were shot "full frame" (the Canonet was a 35mm camera) and "bokeh" was unintentionally plentiful. But the interesting thing to me, when I look back, is how much more interesting the images were with their smeared backgrounds and cinematic lack of high sharpness.
I thought about the cameras and lenses we have today and our manic pursuit of high sharpness, crisp contrast and a general obsession with image quality over everything else. And I thought it would interesting to take a step or two back and at least see what modern life looks like when we go "over the top" wide aperture.
It is cheating a bit to use a very modern camera. Some of my sun-drenched scenes would have been far outside the range of my old film camera. I could never have shot wide open in the sun with a film camera, the shutter of which could only go as high as 1/500th of second. With the S1R I watched in several situations as the camera's shutter pegged at 1/16,000. Fun stuff.
Looking back at the old prints makes me wonder why I set off in pursuit of more "image quality" because it almost always came at the expense of so authentic feeling in the images. Another case of media reinforcing an easier to understand method, or commercial considerations beating the creativity out of us working photographers.
For my next walk I'll grab an older, manually focusing 50mm and shoot that wide open but with the additional overlay of shooting nothing but Jpeg and always in monochrome. Let's see if we can create a time machine and turn back technique to a more visually interesting period. 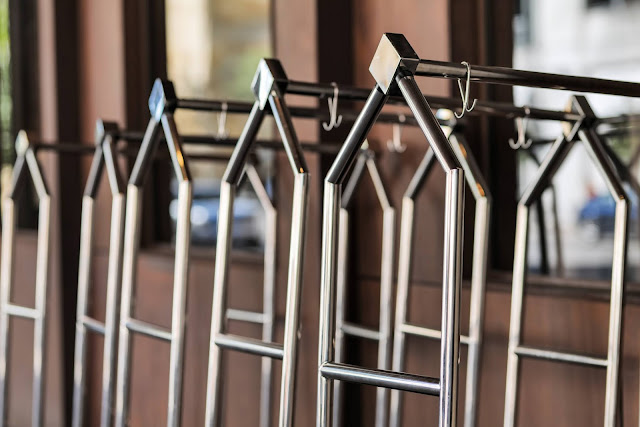 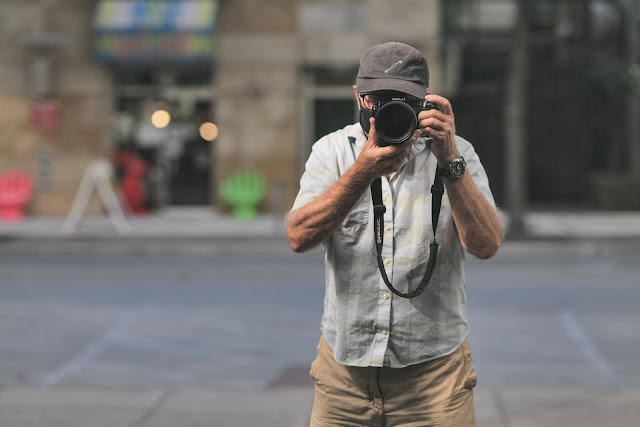 The Photographer at work. 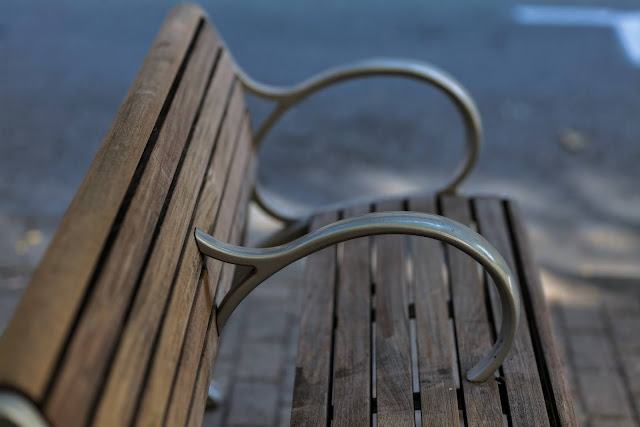 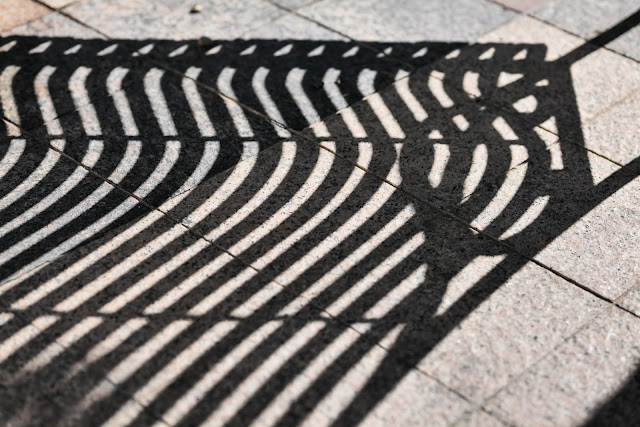 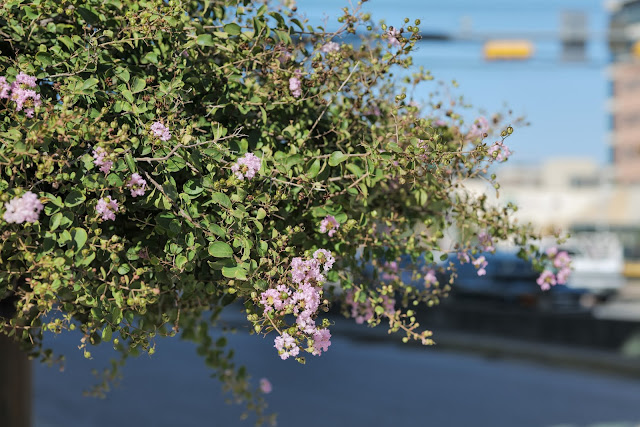 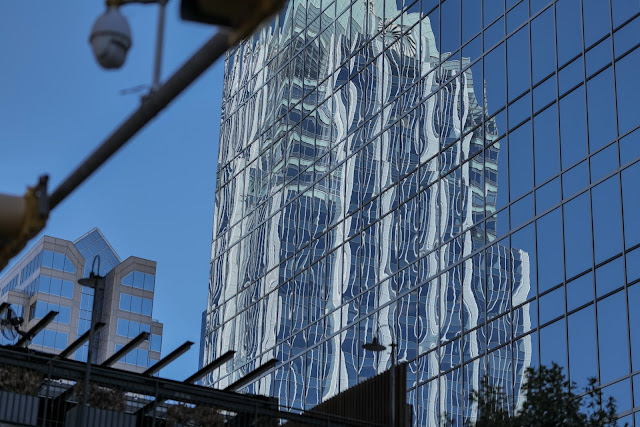 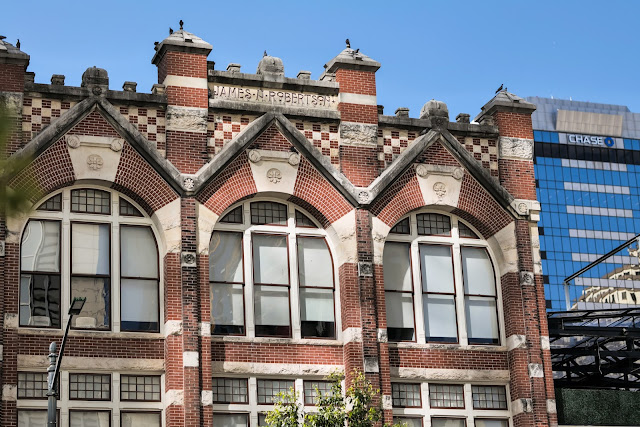 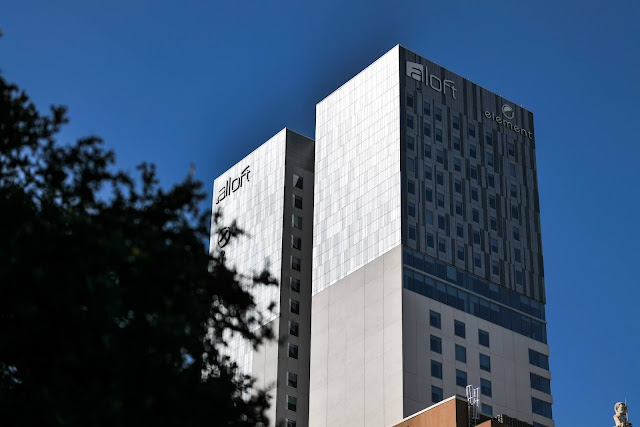 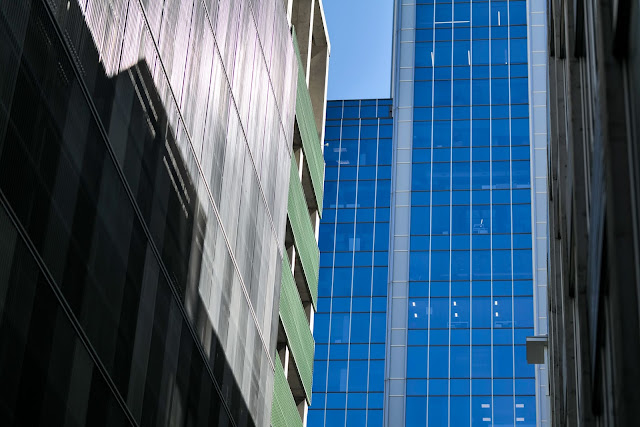 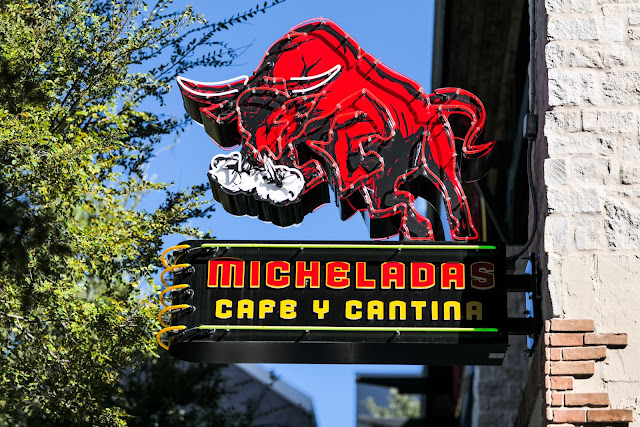 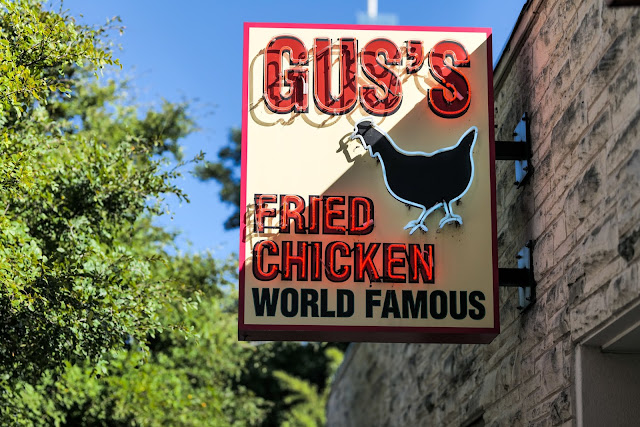 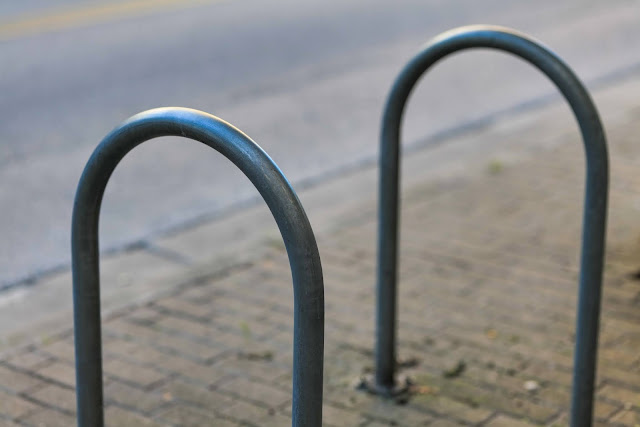 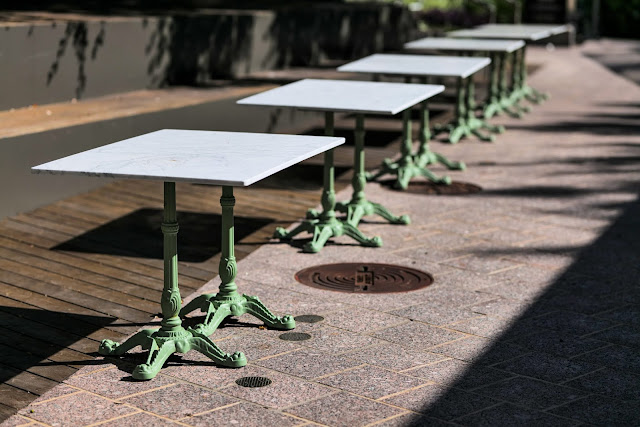 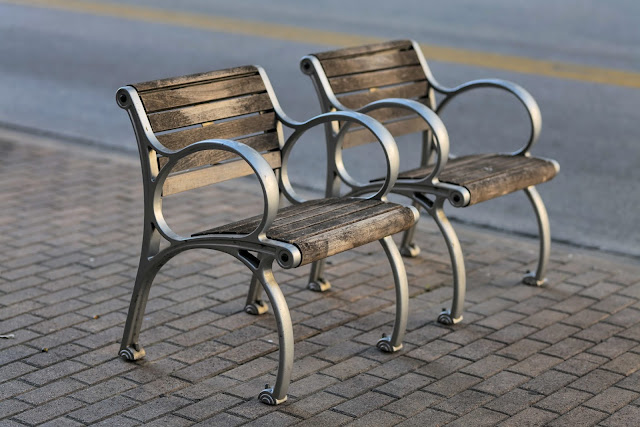 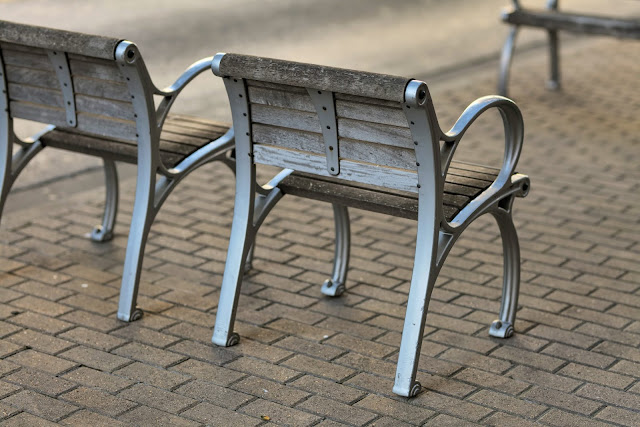 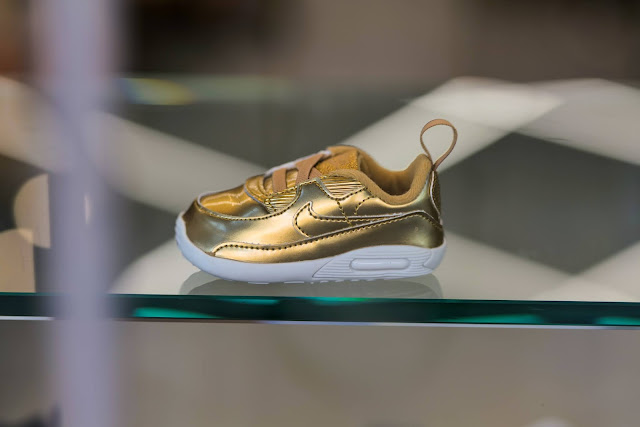 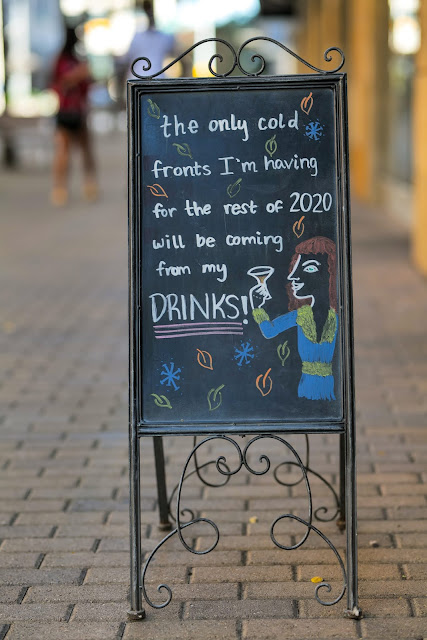 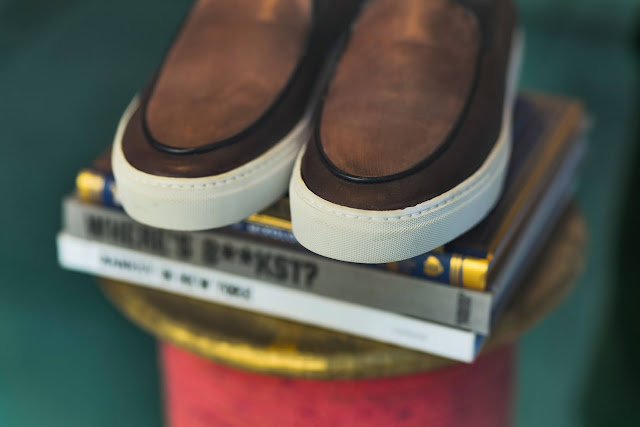 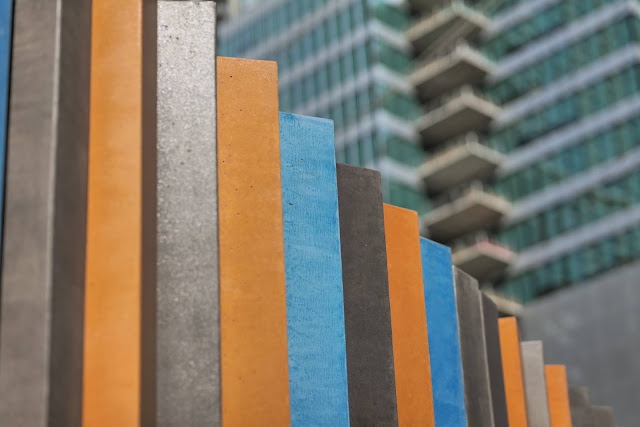 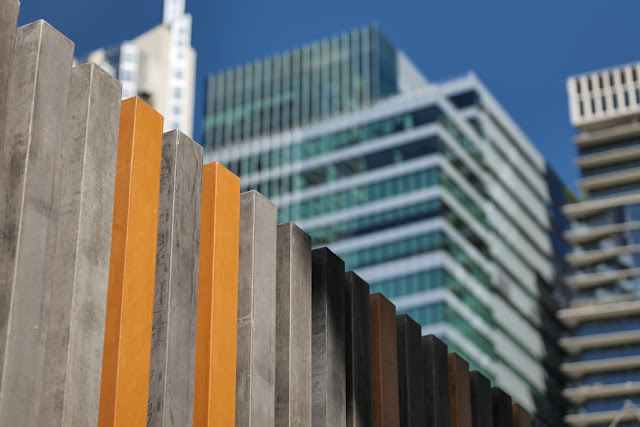 Posted by Kirk, Photographer/Writer at 09:39 11 comments:

Why Volunteer Projects Can Be Valuable. 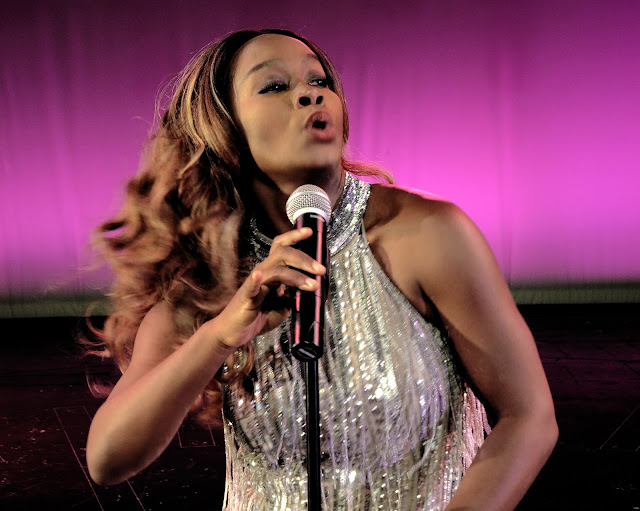 When you volunteer and collaborate with charitable organizations, especially creative and performance-oriented ones, you get some leeway to try new techniques and new looks which can be the lifeblood of your quest to stay relevant.
I've done a number of video projects for corporate clients over the years and a prerequisite for most of them was the need to be "safe," not do anything visually or stylistically risky and they nearly all revolved around doing interviews in fixed spots. Hit the mark on the floor and don't move. Even if you love the "idea" of filmmaking that's a quick way to go stale, lose interest and start showing up just for the money.
Over the years my work as a photographer and a filmmaker for Zach Theatre has allowed me the freedom to continually explore and take chances with gear, color looks, compositions and so much more.
Sometimes, when I've bought a new lens, I've just called up the marketing team at the theater and asked if there was anything they needed images for. When I bought the Sigma 85mm f1.4 for the L-mount system I called and asked if I could come by and shoot some of the early dance rehearsals for "Christmas Carol." No guarantee to the theater that I'd turn out anything they could use but my track record with them is pretty good so they were happy to have me there. I shot for hours and worked the lens hard. I shot a lot at f1.4 and f2.0 (which is probably why you would buy that lens!). Having thousands of frames from the same low light venue to compare I could probably tell more about the virtues and limitations of that lens by the end of the weekend then I would find out walking around with it, casually snapping a frame here and there.
By the same token no one at the theater actually asked me to go out and buy a gimbal (or three). I knew that it was a look they really wanted but since I was volunteering they were okay with me trying to fudge it all with handheld cameras or watch me try to move fluidly (not) with a camera welded to the top of a monopod. But their collective desire somehow invaded my brain and I decided to give something new a try. Now I'm pretty delighted with what we produced and I'm looking forward to using gimbals extensively on my own projects and on projects for clients with actual budgets for video.
But the important point is that I might never have tried one without both a push and the comfort of knowing my collaborators would let me try my hand at it and look the other way if I made grievous mistakes.
Had it been a commercial project I probably would have hired one of my friends who already has an impressive track record with gimbal work, added him to the job as "mobile camera op" and moved myself to the role of "director." I would not have run out and bought a gimbal and taken the chance that I'd not be able to master it in time. Or give it the time and attention needed for me to become at least competent.
People ask me a lot why I bother to do some pro bono work for arts organizations and sometimes I question myself as well. Zach Theatre pays me to photograph their tech and dress rehearsals but they don't always have a budget for stuff that I think would work well for them. Stuff that would elevate their social media or provide for pre-marketing shows. Since I love attending the theater and am friends with dozens and dozens of the creative people there I like giving back a little extra.
But if I do an exemplary job (luck?) then I have another good piece in my portfolio to share with prospective and ongoing, for-profit clients. And I'm sure you know how hard it is to effectively self-assign and create good portfolio pieces consistently. At least a volunteer assignment, even if it's self-assigned, gives you a framework to keep you focused and gives you the discipline to follow the project all the way through to the end.
I can't point to any specific, giant project for a commercial client that's ever come my way as a direct result of a volunteer opportunity but I also am serially baffled when people all over Austin already know my name and reputation before we've even met. Since I hardly market they must be getting the branding message from somewhere...
But really, I got into photography because I loved the process of taking photographs of all kinds of people. I love to make environmental shots as we'll as studio stuff and, guess what? Theaters are full of interesting, vibrant, high energy people who love to be photographed. I'd call a sprinkling of pro bono work a win-win.
An added bonus: My family and I get to see a ton of really great theater performances!
Posted by Kirk, Photographer/Writer at 05:30 6 comments: