My very first visit to an art gallery show opening since 2019. Fuji X100V in tow. 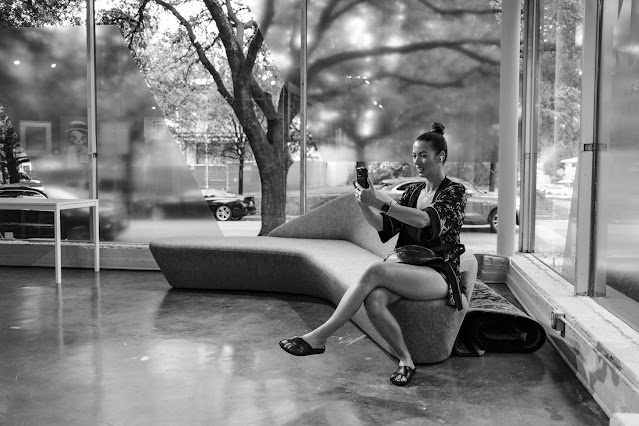 show selfie. and conference.
A new gallery opened a few months back. It's in a building complex with a number of tony antique stores, an oriental carpet dealer, and some other luxe-y, artsy businesses. And it's about a block from the big Whole Foods store; right in the middle of Austin. It's called, West Chelsea Contemporary and, as the name suggests, it shows and sells contemporary/modern art. I'd been in a couple of times to browse but on one recent visit I spent some time chatting with one of the gallery employees and she subsequently invited me to the opening of their new show, called: "Icons and Vandals." Never one to pass up an invited, champagne augmented, opening I accepted and invited Belinda to join me. The opening was yesterday afternoon.
The show is amazingly fun. And it's about time Austin got a gallery showing real, national/international talents. On tap were pieces by Banksy, Andy Warhol, David LaChapelle, R. Crumb, and many other big names in the art biz. Prices ranged from $2900 for un-editioned lithoprints to well over six figures for original oils. A wake up call to local galleries re: pricing strategies, for sure.
The gallery space is big and open. The reception was from 4-6 pm and it was extremely well attended. I wore my favorite Gallery Opening Jewelry Camera, the chrome version of the Fuji X100V. It went well with my somber, mostly black, gallery-hopping outfit. It was perfect.
The crowd was a mix of young and old. A nice blend of wealthy and normal. There were several large Rolls Royces and a couple of Bentleys parked close in, and I noticed little red dots on a fair percentage of the art cards, adjoining the individual artworks. No, the red dots had nothing to do with Leica cameras; they indicated that the artwork was already sold. So, a nice day for the gallery owners...
It's the first opening we've been to in over a year. Pre-pandemic openings for galleries, museums and theaters were almost a bi-weekly event. This opening came right after the CDC reappraisal of mask wearing for the fully vaccinated and it meant that about half of the attendees were wearing face masks and the other half weren't. Younger people were more likely to be wearing masks and the older component of the crowd more likely to be wearing smug smiles.
We stayed for the better part of 45 minutes and cruised through the work a couple of times. There were four or five pieces I'd love to have. One is a brilliant silkscreen print of Superman, by Andy Warhol. It's just fun. There were two or three pieces by an artist named, Barminski, that I would have purchased if someone had not beat me to them. And there is a Jim Dine painting that's way out of my budget but really sunk its hooks into me.
We were tripled-booked last night and after our breeze through of the gallery we were off to a friend's house for cocktails and a casual dinner on her fabulous patio. It felt great to be out and enjoying a social life again. We were masked at the gallery; since the employees were also covered, but everyone at the dinner, including a fair number of my fellow masters swimmers, had been well and fully vaccinated for some time now and we were all more than pleased to see real smiles again instead of little patches of blue or black.
I snapped a few photos at the gallery opening in order to get more play time in black and white with the Fuji. I was lazy and used the "Acros" setting instead of programming in a Tri-X recipe. They are a little contrasty and a bit too clean but there it is. 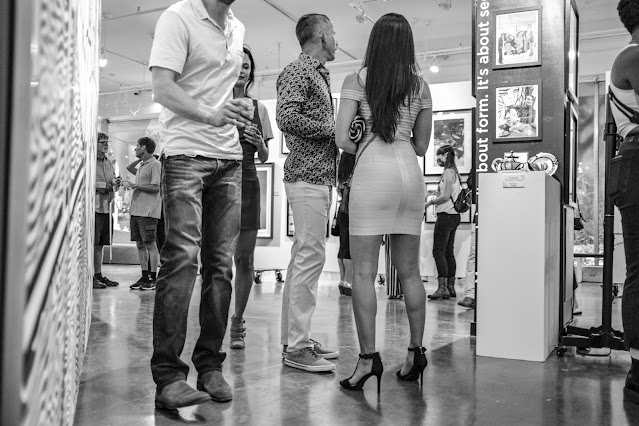 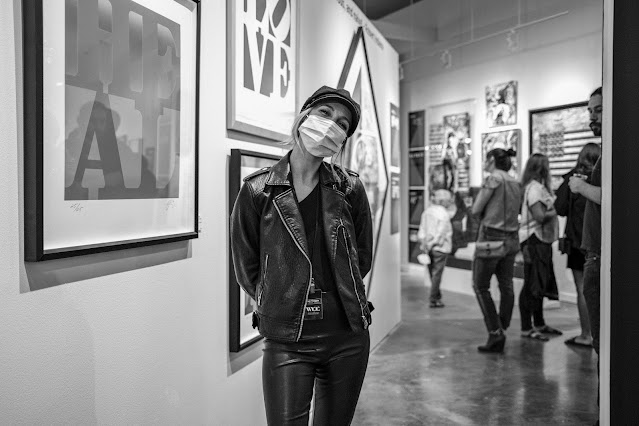 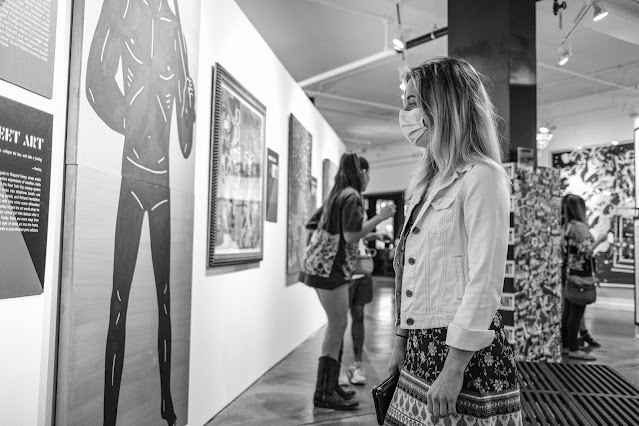 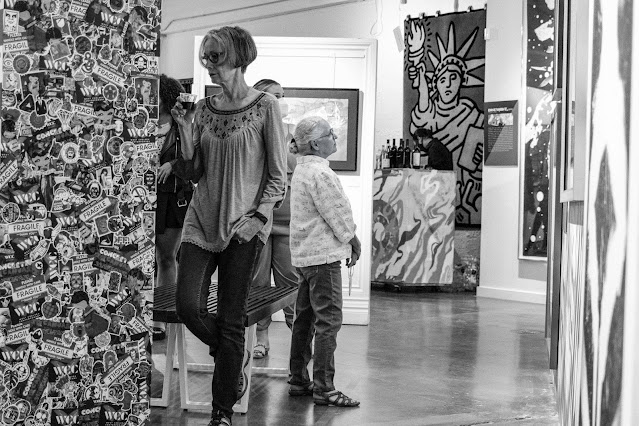 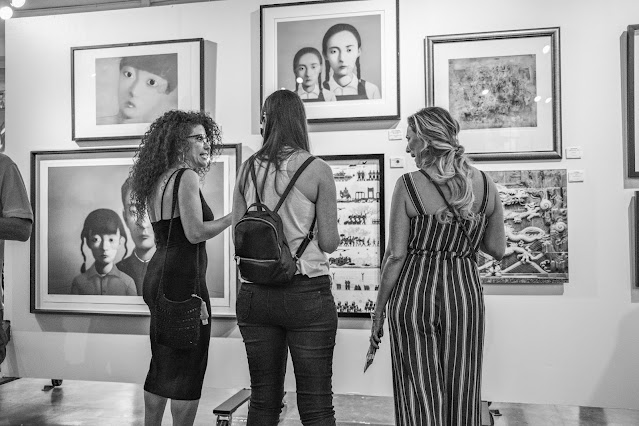 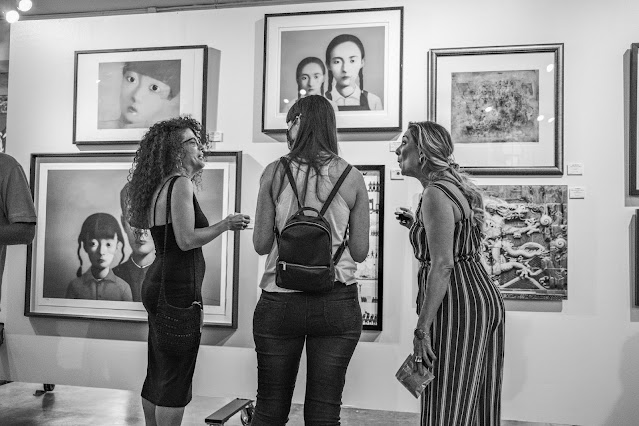 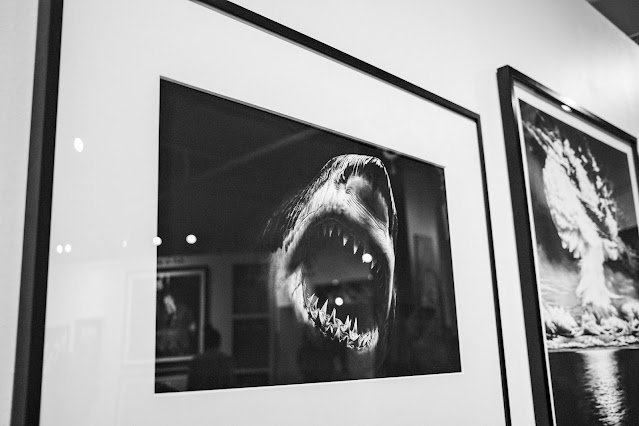 One show, two sharks. Above: shark one.
Below: shark two. 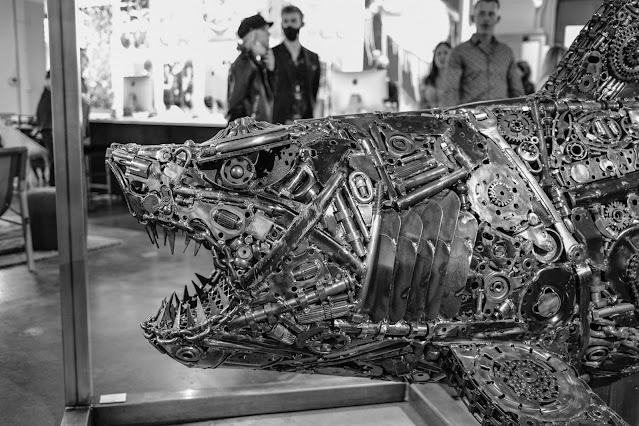 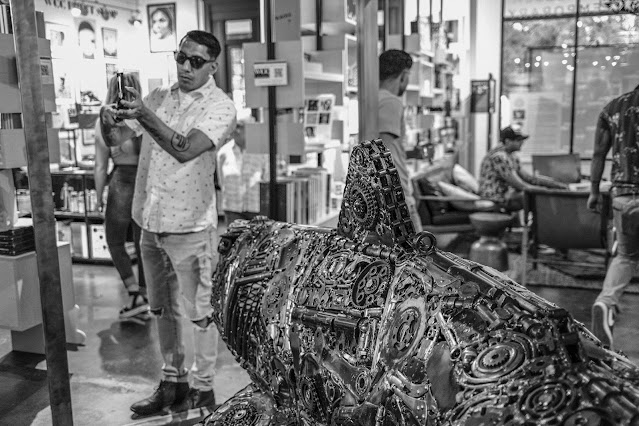 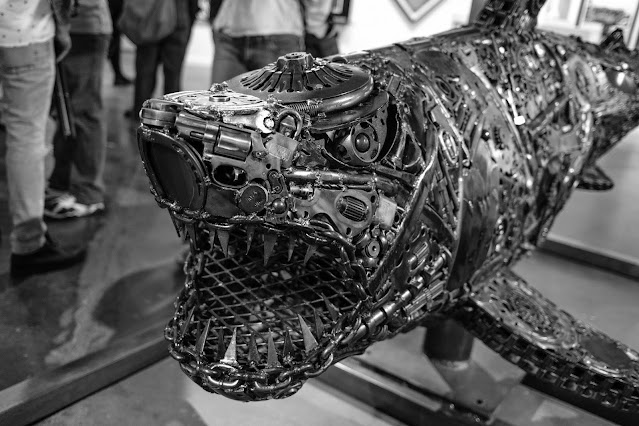 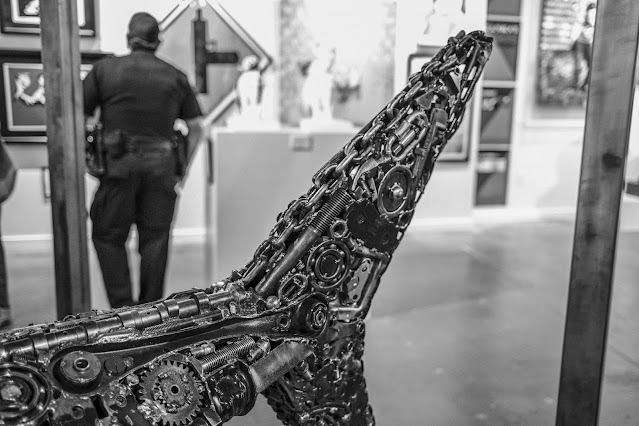 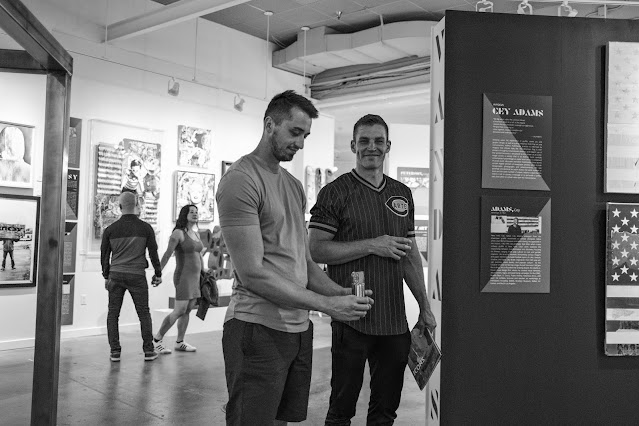 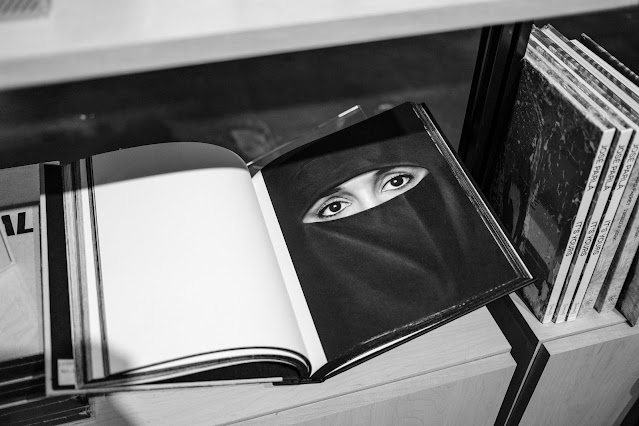 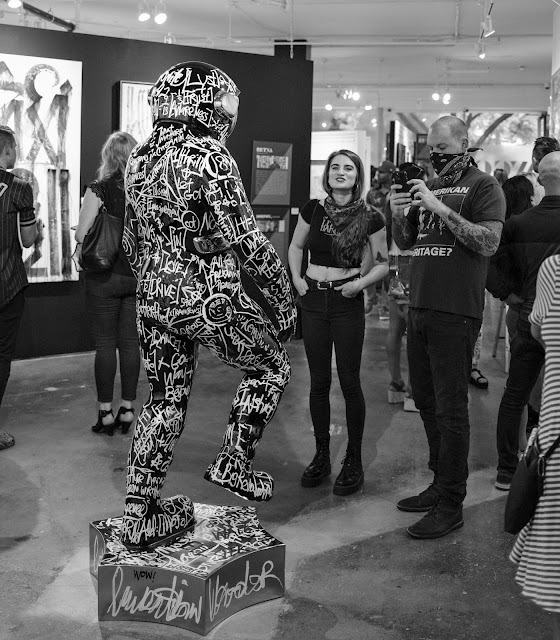 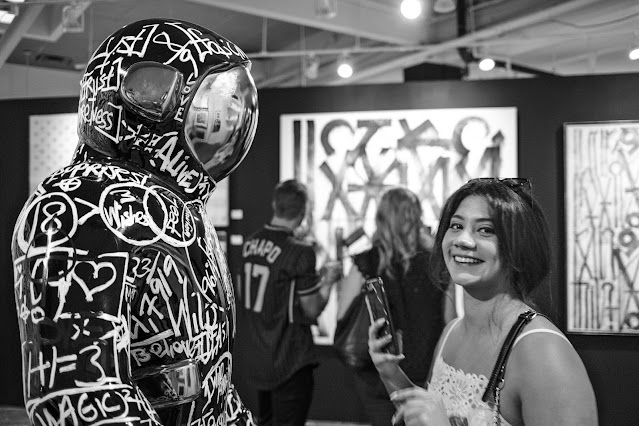 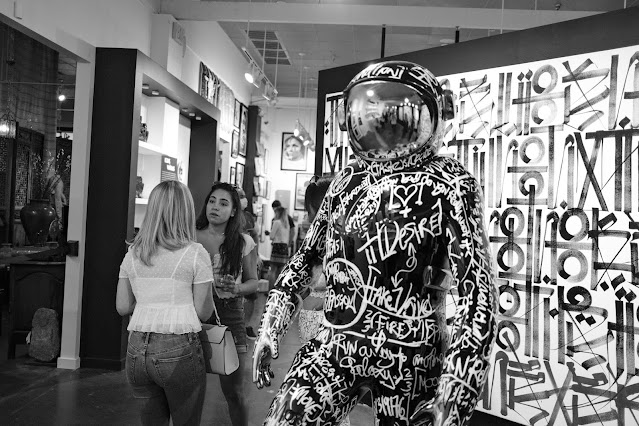 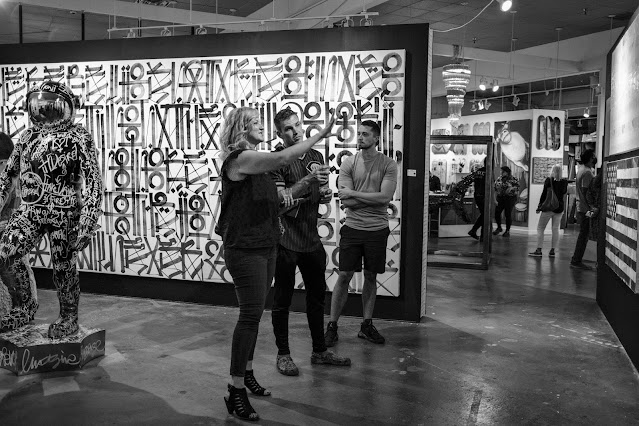 Loved the quote from Andy Warhol:
Art is what you can get away with. 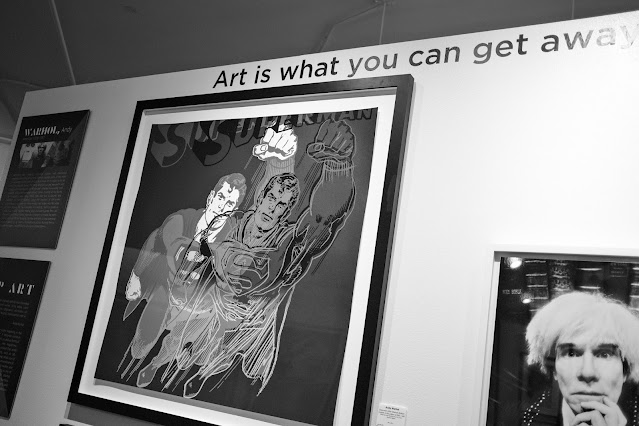 Forgive me for not posting something amazing and absolutely spellbinding today. It's just that I've been overwhelmed by robocalls. Yes, robocalls. About every ten minutes my cellphone rings and I look at the caller I.D. to see who might be calling (since most humans now skip speech communication and go straight to text or, if slightly older, e-mail).

I answered the first couple calls since the callers spoofed both my area code and the three numbers of my local exchange. I thought it might be a neighbor or someone's number that I had forgotten. Once I answered the call the pre-recorded message started and "informed" me that they were calling from "Amazon's Fraud Dept" to let me know that "an unauthorized charge of $729 was attempted on my account in Dayton, Ohio." I was prompted to press "1" to speak to a representative. But, of course, Amazon never calls with accounting alerts. They send e-mail. Always. So I was immediately alerted that this call was a scam.

Just to be sure I hung up, went to my Amazon account on a hardwired computer (not wi-fi) and went through the additional, two factor authentication process. No such charges had been made to my account. Nothing was amiss. I contacted Amazon and they confirmed that this is not the way they operate.

After the first call I started getting calls, on average, about every 15 minutes or every half hour (the duration rotated) during the day. This morning, after swim practice, there were eight calls complete with eight voicemails all chirping on and on about this fictitious charge from Dayton. The interesting thing, besides the persistence of the calls, is that each call comes from a different "local" telephone number. This makes it nearly impossible to just "block contact" with one's cellphone.

I spent some time this morning, after a lovely coffee and pastry from Trianon Coffee, filing a complaint with the FTC. They recommend installing a call blocking app on one's phone. I suggested that they institute a federal death penalty for even the first episode of a robocall and further suggested that they get the NSA and Palantir to immediately focus 100% of their manpower and computer power on solving the USA Robocall Crisis. This is an issue that I hope both sides of the political aisle can get behind and may be the the issue that reunites our fractured populace. Death to RoboCall Scammers!!!

If anyone in the VSL braintrust is an expert in repelling, ending, diminishing or otherwise destroying robocalls and their human masters can you please let me know if there is something else I can do to protect my sanity (at least as it relates to robocall issues....) and get some much needed relief from this harrowing menace????????