Domesticity and thunderstorms. A quick post. Also, any readers interested in owning a "Kirk Tested" Panasonic S1R body with a battery grip? Details in the post. 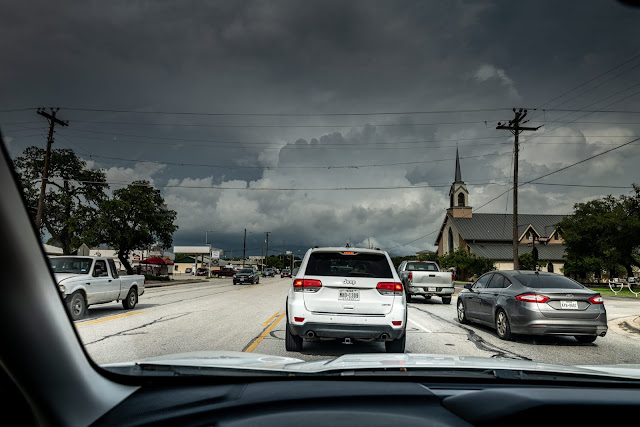 Sitting at a traffic light in Dripping Springs, Texas.
Waiting to drive into the storm.
After the giant deluge of rain and the huge winds that raced through Austin a couple of days ago we were left with gutters covered with debris and yards full of fallen ball moss and broken branches of all sizes. I got to work on it right after coffee and a meager breakfast, yesterday. I was up on the roof with a leaf blower dislodging the gutter debris from the screens that keep the trash out of the actual troughs.

I hate being up on the roof because I'm a bit acrophobic and there ain't no guard rails up on the roof. But the thought of mega-gallons sloshing over the tops of the gutters and into the flower beds steeled me for the ordeal. I do take a mischievous delight in jumping off the roof at the point where it's on five or so feet from the (soft) ground. Makes me feel like a kid.

My leaf blower is electric. Can't stand the noise the gas ones make. But the trade-off is carrying around a 100 foot extension cord. Thank goodness we keep a couple of those in the studio.

My two hours of bending over and grabbing ball moss and sticks have given me a new appreciation for manual labor and I'll never take a bunch of grapes for granted again. After we finished with the final clean up Belinda and I agreed to pay our yard guy more money per visit. It's insurance against me having to do this again... Yes, I'm sore today.

After serving my sentence in the yard I took a shower to rinse off the grime, had a super-healthy lunch (yogurt, muesli, pumpkin seeds, walnuts (lots of them) fresh pineapple and fresh blueberries); all washed down with one more cup of coffee, and then I decided to get the hell out of Austin before any other chores popped up.

I've wanted to really spend time testing the combination of the SL2 camera and the Sigma 24-70mm Art zoom. I'm tired of, worn out, with downtown Austin. So I thought I'd take a leisurely loop through the Hill Country. I mapped a course through Dripping Springs, over to Johnson City, then to Blanco, and back to Hwy 290 on the wind-y, twisty, two lane Henley Loop and then finally back to Austin.

I only made it as far as Johnson City because I found a treasure of a gallery and spent nearly two hours exploring every nook and cranny of the space. It's the most eclectic gallery I've ever been in and I had a blast, shot lots and lots of images, and met two of the nicest gallery owners you could imagine. Both are refugees from Texas's most boring city: Dallas. We all agreed: life is too short to live in Dallas...

The road back was a bit perilous. There were huge thunderstorms and, for about 10 minutes, a lot of hail. When I first heard the pea sized hail strike the roof I started looking for either a dry cleaner's shop or a bank branch. Both have covered drive throughs and both are generally closed on Sundays. I was lucky to find a dry cleaner's drive through in minutes and pulled in so my new car wouldn't gain a free "pebble" finish. I put Elvis Costello on the audio system and looked up the current weather radar on my phone. About 20 minutes later the late afternoon settled back into steady rain and the threat of hail dissipated. I came home with tons of great photos from the gallery in Johnson City and am nearly through with the break-in period for the car. That clears me for a longer adventure in the near future.

Gallery images coming in the next few posts. 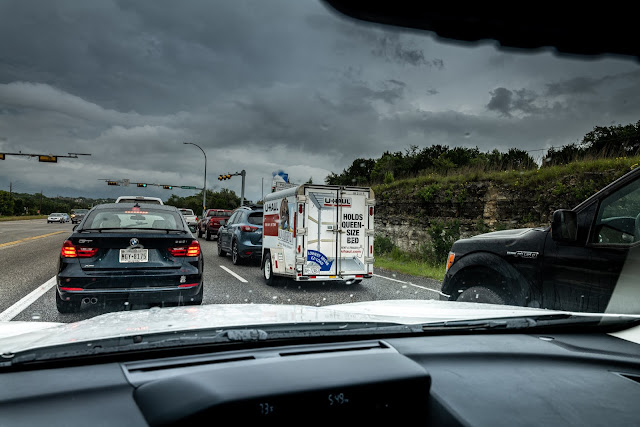 Why do U-Haul trailers seem so strange to me?

So, at the end of this week I'll have a brace of Leica SLs and an SL2 camera and I need to thin out some other inventory to make space and offset the cost (partially). I'm selling my unbruised Panasonic S1R camera body, with accessory battery grip (also Panasonic) for the bargain price of $2200 plus the cost of shipping. I'd like to sell it to some one who is a blog reader so I'm listing it here first. The camera comes with a body cap, the charger and original battery. I'm not including a battery for the grip; you'll have to add that yourself.

We'll do this via PayPal. Unless you want to send hard currency.