Added just because I think cigarette advertising from the past was amazingly obvious. And wildly fun --- in a twisted sort of way. 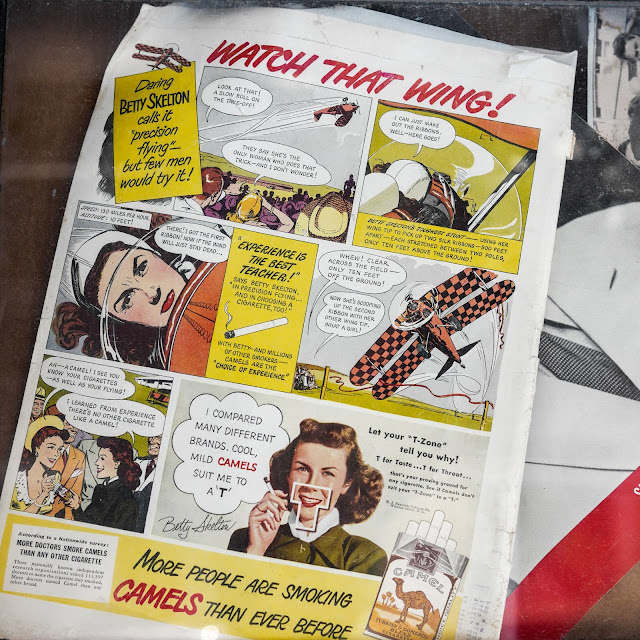 Shot through the window of the Hoffbrau Steakhouse; an ancient, cheap, steak restaurant that's been on Sixth Street for 50 some years. Now the establishment is being renovated into yet another indoor/outdoor bar. Ads like these are covering the front windows during construction.

Betty is not doing a good job convincing me to smoke Camels. Or anything else. But I do love comics.

Copy work via the Leica SL and the Sigma Contemporary 45mm f2.8.

In defense of small, cheap, portable, rickety tripods. Sometimes they are just the right tool for a night time adventure. 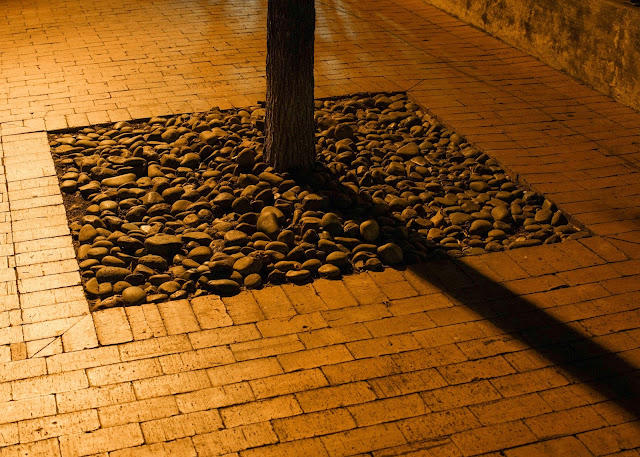 I'll admit to being over supplied with tripods. I've got big, heavy ones that I love to use and hate to carry. I've got smaller ones that I'm willing to carry further. I've got one very small one that I'm willing to carry for miles. I would never take my Gitzo Studex out of the studio if I needed a tripod to carry on a walk of any distance at all. It's super sturdy and I could probably use it as a jack stand for my car but it's ridiculously heavy and large. It would make the process of walking around for more than a couple hundred yards sheer torture.
The opposite extreme is a very small and light, carbon fiber tripod I bought mostly on a lark as it was a just a tad over $100 and I thought it might have come in handy for night time adventures with small and lightweight cameras like the Canon G10 or G16. It doesn't extend up very high. With its slender center column extended I still have to bend over my extremely tall, five foot, eight inch frame in order to look through the finder of a camera mounted on it. And any tripod as small and spindly, no matter how nicely built, is going to sacrifice a lot of stability. It's the perfect tripod on which to practice your camera self-timer skills because touching the shutter button directly to shoot is....perilous.
The tripod I'm talking about isn't something I'm really recommending everyone go out and purchase. I think each one of us has to consider where they fall on the tripod spectrum but I'll go ahead and give you the model designation so you can see what I'm talking about, if you are interested.
It's a Benro TSL08C "Slim" carbon fiber tripod. At the time I bought it I imagined it would be one of the very few tripods I'd be willing to carry into remote locations and, truth be told, I've strapped it to several different photo backpacks and carried it for miles at a time. I hardly notice when it tags along.
On Wednesday evening I was antsy and ready to get out of the house. I'd gone to swim practice early in the morning, and then walked with Belinda before it got too hot, but I spent the afternoon doing paper work and writing a blog post or two. It was my turn to cook dinner as well. After I washed the last dish I announced that I was going to go for a walk downtown, just to see how different it felt after dark.
I pulled into my favorite parking space around 9:30, grabbed the tripod in one hand, put the Leica SL with the Nikon-S 50 on it over my left shoulder and started walking. Night time images of buildings and store windows isn't really my "thing" but I did manage to find some uses for the tripod.
The streets were a bit wild that night because the police were busy re-implementing the ban on people camping out in the downtown district. That made a number of people experiencing homelessness angry, and some people became loud and aggressive. Didn't bother me much but a few visitors who seemed new to Austin were plainly nervous about the situation.
Then there was also the heat. We started off the week with a strong heat build up and even at 10 pm it was still in the low 90's downtown. There was a consistent chorus of ambulance sirens that accompanied my walk. I made the loop and headed back to the car and then back to my own neighborhood.
It was fun to work with the Leica SL on some extended exposure shots. The camera will meter some really long shots but I didn't go any longer than about 30 seconds. Halfway through the process I found myself losing interest and wishing I had a human model to work with in the same settings. That, and maybe a bit of flash or LED lighting. Now that would have been more compelling --- at least for me. 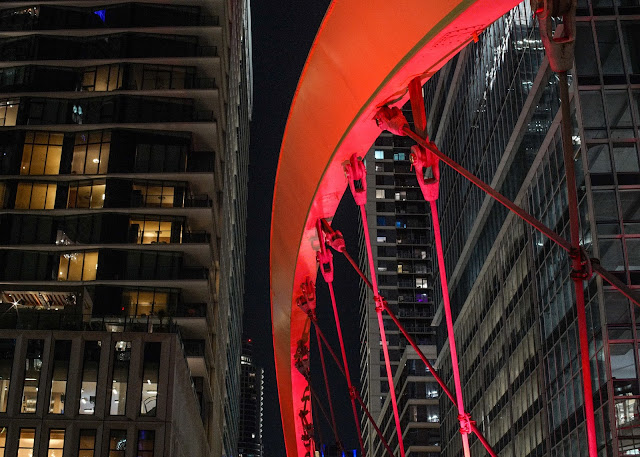 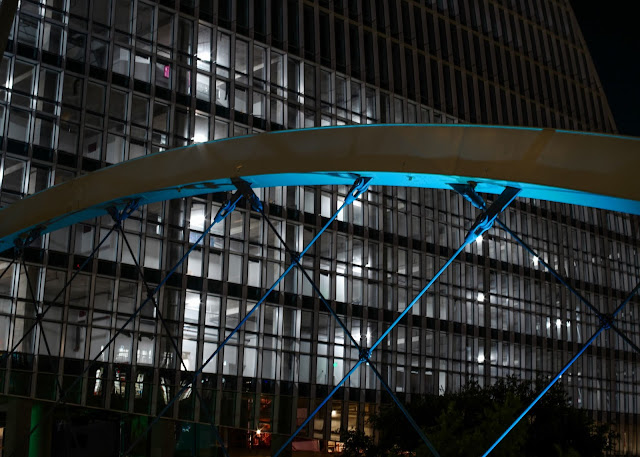 Posted by Kirk Tuck, Photographer/Writer at 19:20 No comments: 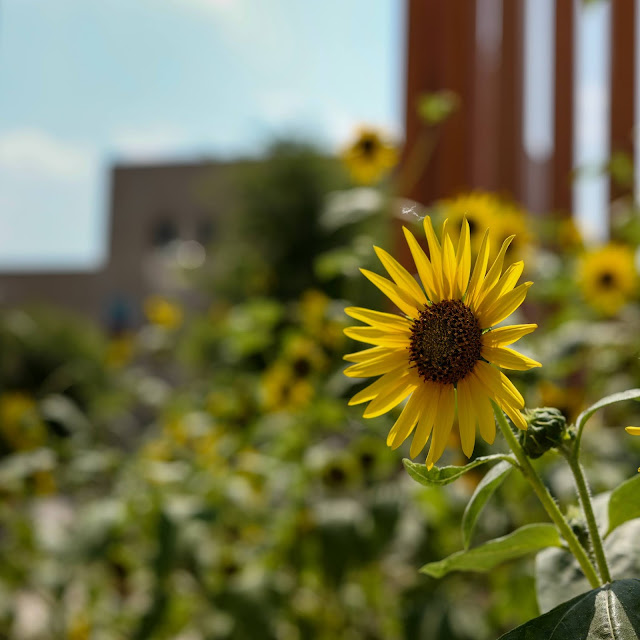 I found this batch of flowers over by the main library a week or so ago and I used them as test subjects when I was trying out the Nikkor-S 50mm f1.4. I shot the lens at the close focusing distance and pulled a couple of frames that I thought were very nice; competitive with many of the lenses that are being released currently.
Today I was marching around in a very green shirt, making photographs with the Leica SL and using the Sigma Contemporary, i-series, L-mount 45mm f2.8 lens. On nearly every review of this lens that I have read or watched the authors are quick to say that the lens is not sharp when used for close focusing. And, while it's true that this isn't much of a macro lens when it comes to getting close, I thought it might be good to run my own test at the closest focus distance and see if the V-loggers, and typing pundits, had the lenses weaknesses clearly identified and adjudicated. Is it thumbs up or thumbs down for one of my favorite L-mount lenses?
I generally use f4.0 as my favorite aperture for this lens. I find f2.8 just fine but I like the little extra depth of field that going just one stop down supplies. I shot with the lens at f4.0 all afternoon and decided not to stop down further while making a "flower test" shot. Might as well test for the settings I usually use.
The camera was hand-held and neither the camera nor the lens "feature" image stabilization. Full disclosure: I had a big coffee about an hour before I shot this flower!!!
So, it's not a glorious photo, and I am a bit unsettled by the bokeh on the left side of the frame, but when I punch in a grab a super tight crop of the flower I am pretty much satisfied with the very detailed details. It's far better than the ersatz reviewers of the web led me to believe. In fact, after seeing this sample, and many more photographs shot at "normal" distances, I'm thinking that this particular lens is a really nice match for the L cameras in general and the Leica SL specifically. And, it very, very easy to autofocus on that body.
If you own a lens and you stumble across a review that downgrades some aspect of the lens's performance I would suggest that you make your own test before you remove the lens from your camera and toss it into the "rubbish bin." It might not be the lens that is unsharp. It may be the people you are getting your reviews from. 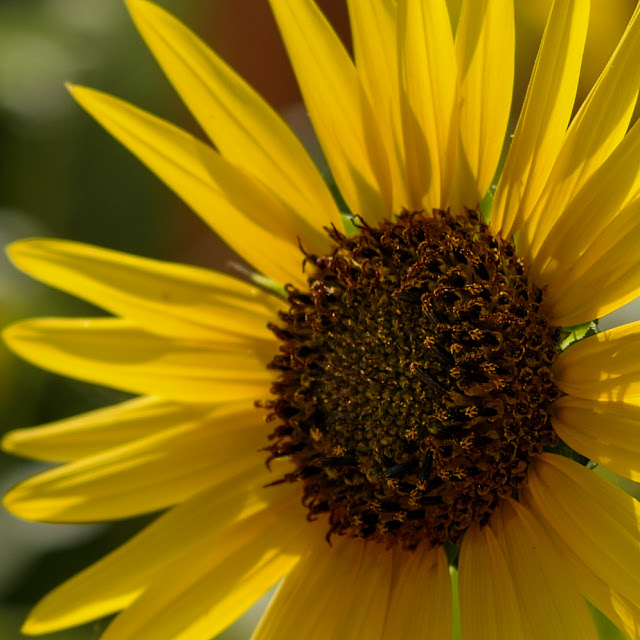 Posted by Kirk Tuck, Photographer/Writer at 18:36 No comments: