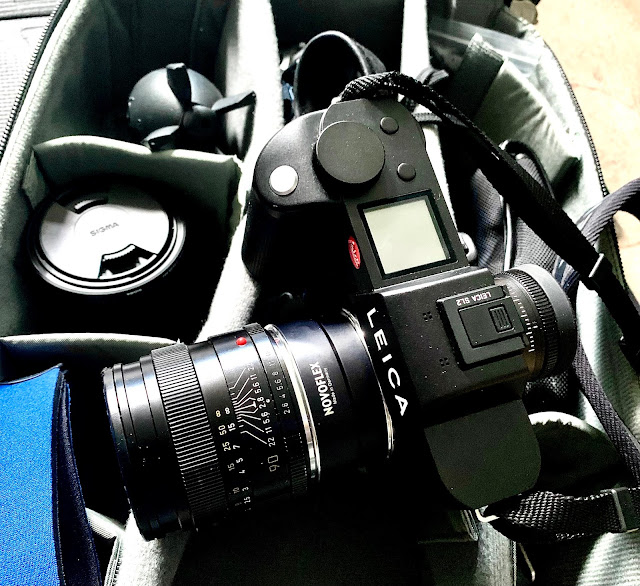 pulling the shooting camera out of the small Think Tank backpack to grab the
memory card and also to toss the battery on a charger.

I've been photographing for several downtown law firms a lot over the last decade. Both are filled with really nice people and most of the partners are avid photographers. It actually makes my job easier because they know how much work it takes to bring a bunch of gear up to their offices, pick the right environments, and work on building a good rapport with their portrait subjects. It's funny; sometimes we spend as much time talking and catching up as we do actually setting up or taking photographs. That casual atmosphere makes the work more fun.

The firm I worked for today is located in one of the newer high-rises in the core of downtown. The offices are very much "class A" office space. The interior architecture is modern and well done. The feel of the public areas is spacious and airy. They have a coffee machine that a coffee addict's dreams are made of...

Today's brief was to photograph one new associate they had recently onboarded. In the past I worried more about schedules and traffic, and the logistics of punctuality, but I seem to have re-prioritized the whole idea of worrying during the darker days of the lockdowns. Now I figure I'll take reasonable steps to arrive on time but nothing extraordinarily heroic or stress inducing.

I went to swim practice first. But I'm assuming you knew that's the way the daily agenda works. I packed last night and loaded all the lights and cameras into the car this morning before I headed to the pool. The swim was fun but nothing particularly noteworthy. We swimmers were just remarking over and over again about how cool the water is. It was 79° today which is amazing given that we're in the very middle of the Summer. It's almost a "Twilight Zone" Summer so far. It's rained almost everyday and we've been topping out, temperature-wise, in the high 80's to low 90's. I've never seen a Summer this chilled out before...

The photos I've been taking for today's law firm have a certain look and style. I've been using the clean, architectural lines, and the soft colors of the space, as backgrounds and try to keep them nicely out of focus. There's a lot of frosted glass that's rich in blues and aquas and makes for a nice melange of textures and colors to play with. Since I'm shooting with my lens near wide open I find it works better to use a continuous lighting strategy instead of flash. Also, since the firm has clients coming in and out, not using flash eliminates an unwanted level of distraction.

I generally use a big, Godox SL W150ii (LED) in a large octabank as a main light and use a second Godox 150 for accents in the background. I put black flags up under the can lights and other ceiling lights to block color contamination on my subjects. I was shooting today at ISO 800 with the lens at f4.0 and the shutter speed at 1/60th of a second. With a stationary subject and a camera on a tripod that shouldn't be a problem.

I white balance for the main subject and let the background colors fall wherever they want to. I can change so much in post now that my only consideration is getting enough exposure throughout to somewhat balance the subject with the background.

The camera was a Leica SL2, set to DNG + sm. Jpeg. WB was set to 5100K. Where I went off the usual program was in lens selection. I'd intended to monkey around with using the Sigma 65mm f2.0 on the camera but setting the camera into the APS-C mode which would make the focal length equal to something like 97mm on full frame. But I remembered that the DNG files would continue to write the full frame anyway; no matter what I saw in the finder. So I attached a Leica 90mm Elmarit-R lens instead. It's strictly manual focus so I made sure to stop, punch in, and check focus from time to time. I lost about 15 frames to impatience and general focusing sloth but I tend to overshoot so we still had enough coverage to edit down to 135 candidates for the client's marketing team.

Things are pretty casual in Austin these days. Even for lawyers. My guy today is a brilliant attorney but less gifted at tying neckties. Probably hasn't worn one since the last interview...  I finally took the tie we wanted to use from him and tied it on myself then transferred it to him. I've never mastered the skill of tying a tie onto someone else. I just can't do it "flopped." My necktie skills were a bit rusty but I got a good knot with a great "dimple" and it was perfect for our uses. I'm just glad the photo comp was "head and shoulders" as a wider frame would have shown that the skinny end of the tie was longer than the fat end. Ah well.

When you've worked with a company for a number of years, especially as a portrait photographer for their advertising needs, you build relationships and friendships --- or you should. I spent some time in the lobby on the way out catching up with one of the partners whose name is on the building and it felt good to talk about families, projects and then cameras. At that firm I am always made to feel as an equal to the partners and it makes my work there special. For me. Some companies see suppliers differently...

After our sessions, and the packing, I negotiated an exfiltration from the labyrinth parking garage and headed back home. I needed to get my ultra damp swim towel out of the car and then unload the gear.

My working methodology is to do every part of the shoot as soon as I can so before I even unpack the lights I sit down at the desk and back up the files on two drives. I import the non-stinky frames into Lightroom and then bore down bit more and drop out as many duplicates as I can. An hour after I pulled into the driveway I had the images sorted, a global color and contrast pass done, and the raw files converted to Jpegs. After that I uploaded the images to Smugmug and broke for lunch.

This afternoon I'll reset the studio for tomorrow. I have a bright, young fine art painter coming by and we're going to make some "Fine Art" portraits. It will be a nice way to end the week. But before the shoot? You guessed it; Friday morning swim practice.

Life is good. Sometimes photography contributes to making it so...

Seems pretty healthy but I was making up for the family dinner I made last night: Fettuccini Alfredo with hot smoked salmon and chives fresh from the garden. I tried to temper the menu with a broccoli and kale salad but...

That's all for today. I think I even have time left over to go takes some photographs for myself.