An interesting lens that seems like the "Goldilocks" 50mm lens of the current era. The Panasonic 50mm f1.8 L mount lens. 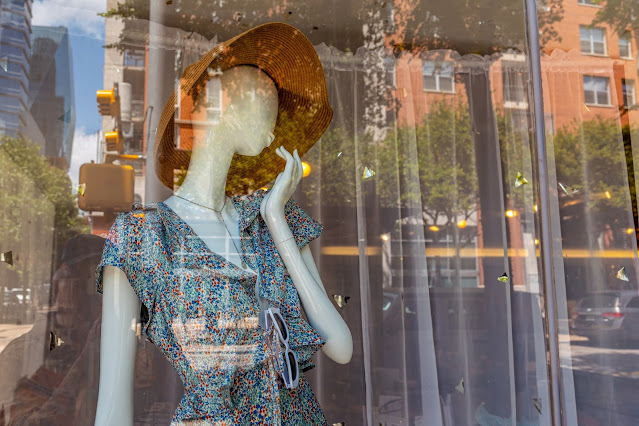 Taken with fun in mind. The Leica SL2 + Leica 24-90mm
I'm a 50mm lens junky. If we are going by the angle of view of a 50mm lens used on a full frame (35mm) camera. There's something really comfortable in that focal length for me. But from the beginning of the L mount alliance (Sigma, Leica, Panasonic) until recently if you wanted a fun, sharp, but easy to walk around with option right at that focal length your options were limited. Extremely limited. In fact, until Panasonic launched the 50mm f1.8 your choices were mostly either intramural weight-lifting exercises with over-engineered, fast and expensive lenses (Sigma Art 50mm f1.4, Panasonic 50mm f1.4 S-Pro or the Leica 50mm f2.0 SL). Each one of those choices is big; really big. And heavy. And expensive. And probably the quickest way to dissuade people not to become L mount, 50mm street shooters!

There is the option of using the Sigma 45mm f2.8 but I'm choosy and if I was going to pick a lens that was "close enough" I always want to err on the longer side of 50mms. Say 55mms instead. Also, there are times (frequently) in normal shooting when I feel that I really, really want that one extra f-stop that the Sigma just doesn't have. I'm not trying to disparage the Sigma 45mm iSeries lens here, after all I have two or them. But that's another story...

I have had success with several "legacy" lenses and lens adapters. My favorite, so far, has been the Contax 50mm f1.7 which is quite small (though made 50% bigger when adding the necessary adapter), followed by the Nikkor F 50mm f1.4S and then the ancient Canon FD 50mm f1.8. All of the legacy lenses were computed for use with film so there are always some weak points in their delivery but I chalk it up to the lenses introducing more "art."

I'm an American so of course I want it all. I want everything both ways. I wanted a smaller, lighter lens; something in the ballpark of the Contax, even with the adapter, but I also wanted the high sharpness and great correction for use with digital sensors that I was getting in the huge, premium lenses. And I wanted it all at a price I could feel good about. I wasn't looking for the barebones performance of the traditional "nifty-fifty" a la Canon and Nikon. I wanted a better optical system. But then again, I didn't really relish spending anything north of $500.

The Panasonic L mount 50mm f1.8 is a great example (along with the Nikon 50mm f1.8) of a thoroughly modern optical design that yields very, very high performance by changing away from the standard 5 element four group, or 6 element five group, modified Guassian designs of the last 100 years. The Panasonic features 9 elements in eight groups. Three of the elements are aspherical, one is ED glass and another element is an ultra high refractive element. Essentially, I am getting the same performance (minus 2/3rds of a stop) that I was getting with Panasonic's "reference" lens, the 50mm f1.4 S-Pro --- but at 1/3rd the weight and one quarter the price.

When people look at the Panasonic 50mm f1.8 L they see a big lens and jump to the conclusion that it is ungainly. Too big and probably too heavy. But it weighs in at 10.6 ounces which is not outrageous at all for an f1.8 normal lens. The lens looks big and it does have a 67mm filter size but the overall body is uniform to other lenses in the family, such as the 85mm f1.8 and (hopefully) soon to be launched 35mm f1.8. The rationale is to make them externally uniform so they are easy to use for video artists. But the bigger overall size also means that they can more easily be made weather proof, cold proof and physically robust. Miracle materials add the lightweight option!

I traded-in the faster L mount lenses with a bit of trepidation. I worried I might be trading down. That I would miss some sort of magic sauce I had yet to discover with the 50mm Sigma Art or the overweight Panasonic miracle 50mm S-Pro. I felt I was creating some sort of performance mismatch when using the $450 Lumix lens with the Leica SL2 camera but in the end I realized that it balanced perfectly on that camera and for the first time in my experience with that camera and a 50mm lens it actually felt just right. The camera and lens are more manageable and so are more fun. But the real important part is that I have yet to find a single point of real compromise with the less pricey option. But I am realizing much better system haptics.

For work I've been using the Leica 24-90mm lens and it really is an amazing lens. Brutally sharp at every setting and every focal length. No compromises anywhere. But when I head out for fun now that lens hops back into the chinchilla-lined drawer (artificial chinchilla --- I'm not cruel) and the lighter, more ebullient 50mm f1.8 Panasonic takes precedence.

In recent photography sessions I've been using the 50mm almost always either wide open or close to it and I'm loving the look I get from it. I hope the 35mm sibling comes out at something close to the price and equal to the optical performance because I have several much more expensive and much heavier 35mm lenses that I'd like to say "goodbye" to. But for now I'm cozying up with the 50mm f1.8 and happy as can be. 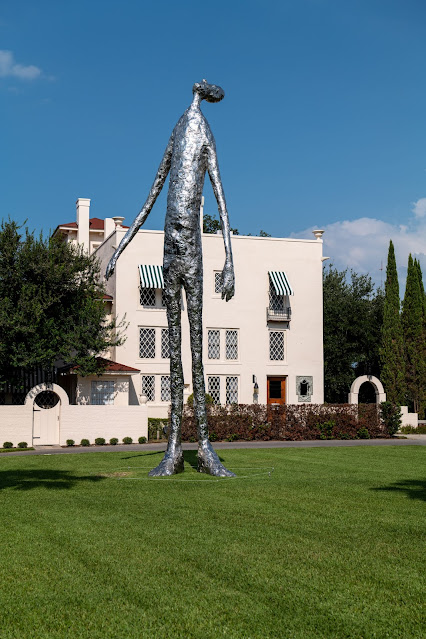 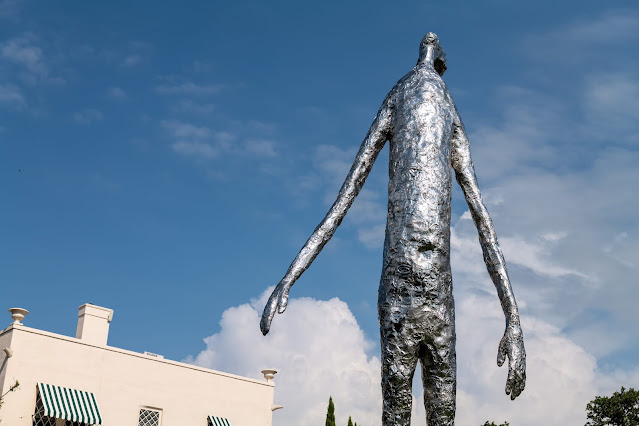 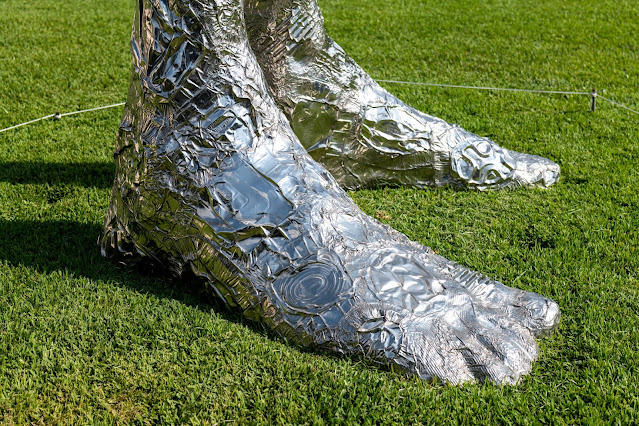 The care and "feeding" of a portrait studio. Gotta keep it cool. 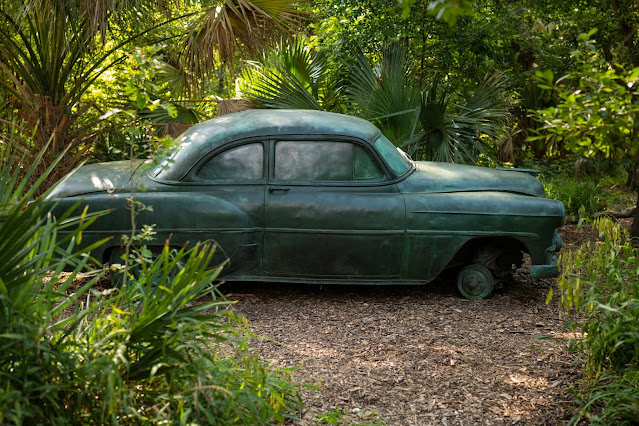 I think there must be a universal expiration date for window-type air conditioners. It seems that every ten years, on the hottest and soggiest day in August, whatever unit I have mounted up on the long wall in the studio starts to fail. One unit just progressively stopped blowing cold air. It ran and ran but it never caught up with the heat. Others just give up the ghost altogether and some soldier on valiantly while mortally wounded. My current Sharp branded unit is in that latter category. It's still cooling the space but it's dripping water into the studio at an accelerating rate. I've tried cleaning it but I think we're past the point of redemption and heading, rapidly, toward the agony of replacement.
This morning I did a portrait of a radiologist and the studio was a nice and cool 70°. But even now I hear the drip-drop-drip of water that's condensed on the interior coils and is exiting the unit, headed for the little tray I put on the floor. There's nothing else on the calendar that requires studio space till Monday, the 6th so I've decided to give the little A/C unit last rites and head over to the hardware store to get a replacement.
The A/C unit sits up about seven feet above floor level. The last time I needed to replace one I still had the hubris of imagined youth swirling about me and I got up on a ladder and hoisted the older, 70 pound unit out and then rescaled the ladder dragging the new one up with me. There were several moments during which I thought neither of us would make it. Now I won't even try. The wisdom of age is starting (in fits and spurts) to settle upon me and the thought of struggling up a ladder with dead weight no longer holds even the slightest appeal.
I'll go to the hardware store with the dimensions of the opening carefully scribed onto a piece of paper and I'll pick the unit with the most promise. It's the end of Summer so most of them will be on sale. I'll try to pick the one with the least offensive industrial design. If only Bang and Olufsen made air conditioners...
But I'll use one of the ever proliferating "handyman" services here in Austin to pull down the old unit and hoist up the new one. Screw it into place, surround with with weather stripping and make sure it's all secure. I find that these days when I do something by myself, to save money, other issues arise and reinforce the idea that hiring pros is the most cost effective avenue.
And to be frank, anyone in central Texas would probably tell you that money is no object where air conditioning is concerned; especially in August. But I think I'll wait till after lunch to go shopping, it just started pouring down rain.
ART: So this set of photographs is also from my visit to Laguna Gloria Art Museum yesterday. It's an installation piece nestled into a small clearing and surrounded by jungle-like vegetation. It was done in 2016 by Terry Allen who, in addition to being an artist, is also a well known musician. The work is called, "Road Angel." The headlights glow and there is music as well.
I love old cars. They had such character. Kinda like old cameras. 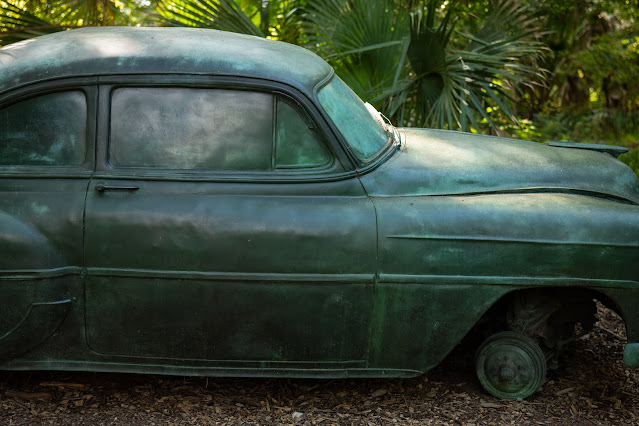 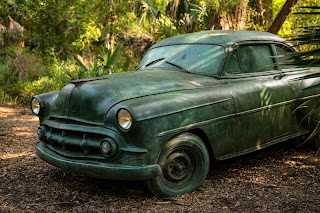 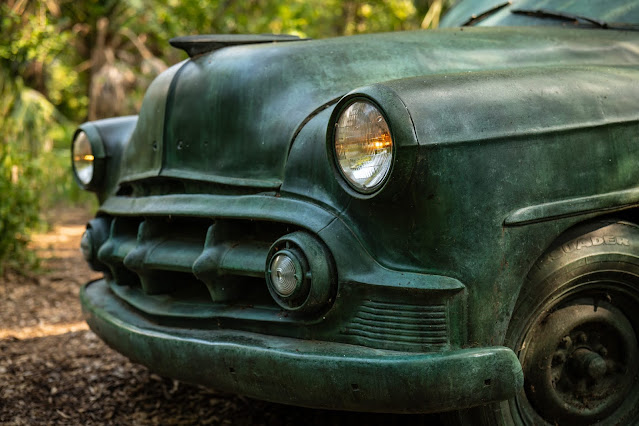 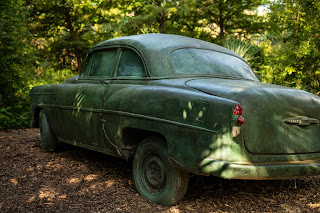 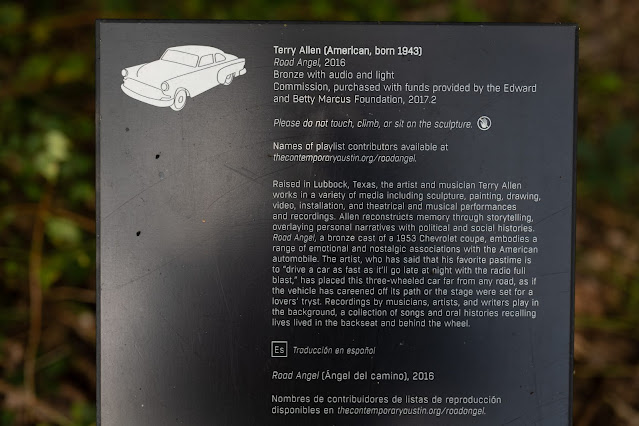 Photo notes: All shot with a Leica SL2 and the Panasonic 50mm f1.8. A very nice combination.
Added: A humorous aside about acquiring and installing A/C in Austin right now. It's the end of the season for air conditioner sales. I was able to find the unit I wanted at a discount of about $70 which made my total purchase price about $300. I called the first "handyman" service which was recommended to me and they indeed can install the unit for me. But their first available opening is on September 28. Of course I need to have everything up and running by the 6th to handle the job I committed to....
I finally found a service that is well reviewed and can do the job on the afternoon of the 1st. That works well for my schedule and gives me ample time to panic if something goes amiss. But the price to install will be around $375. Funny to live in a time when the installation service is more costly than the actual product...
I asked the first vendor, "why so long till a service opening?" The person on the other end of the phone said, "Well, everyone in Austin seems to be trying to get their house ready to sell. Everyone who is not selling a house seems to have just bought one and is now slogging through all the fixes and improvements they wanted to do. A few are fixing everything that made their houses vulnerable to last February's freeze." She added, "Too bad you didn't want to do this last Fall. We could have been over the next day..."
It's only time and money...
Posted by Kirk Tuck, Photographer/Writer at 11:59 16 comments: