A casual portrait of the chef at Ab Astris Winery. 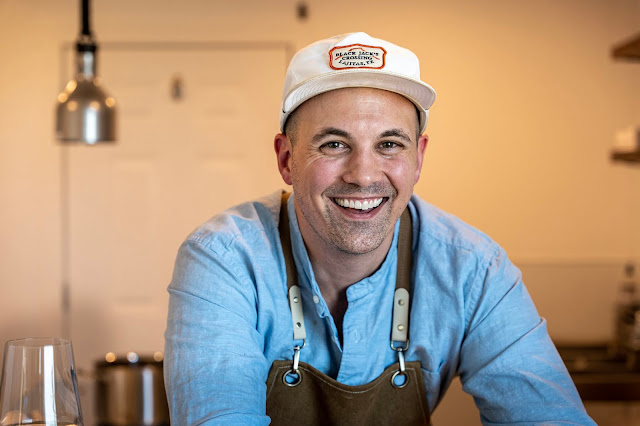 An available light portrait of the chef at Ab Astris. Taken with a Panasonic S1 and the Sigma 24-70mm Art lens for L-mount. No big set up, just a quick three or four frames and a bit of engagement.
Posted by Kirk Tuck, Photographer/Writer at 15:28 5 comments:

Some older, manual focus lenses work perfectly well with the Leica SL. This one in particular is nice and sharp... 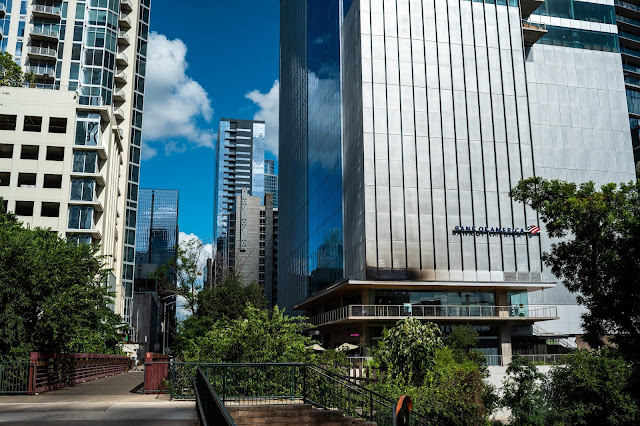 The building on the right of center is a brand new Bank of America tower
and I noticed, only when processing the files, that they restaurant on the first floor
has already blackened part of the exterior with their exhaust vent. Kitchen fire?
Or just too much smoke?
I am on hold this morning with a federal government agency. I was informed that the wait time would be between one half hour to one hour. I am currently 23 minutes into the wait time. But it's business that has to be resolved so I have the ear buds in and my computer in front of me. Just wanted to let you know some of the exciting ways in which I pass my time in the office...
I took a camera for a walk with me yesterday and when I got home to post process the files I realized that I hadn't erased the files on the card from the previous two walks and that was a good thing since there were photographs from a close friend's 66th birthday dinner and a few portraits of B. Also meshed in between yesterday's rambling stroll and the birthday pix were a small collection of images I'd made with an very likable, older, manual focus lens.
The lens is the Carl Zeiss 35mm f2.0 ZF lens that was originally made in a Nikon F mount to be used on their DSLRs. It quite a heavy lens with a fully metal build and heavy glass elements. I used it on one of the two Leica SLs I keep here on the desk. I'm using an Urth adapter that allows for fully "dumb" use of Nikon F mount lenses on any L mount camera. When I say "dumb" I mean that the lens transfers no information to the camera. In the menus of the SL cameras  you do have the option of choosing one of the Leica R or Leica M series lens profiles and having the camera presume that this is the lens you actually have mounted. It won't give you f-stop information or any exif but in some cases where optical designs are similar I imagine it will do a few corrections to your files on the way to Lightroom. For the most part I'm too lazy to go into the menu every time I mount a non-communicative lens but I thought I'd let you know that this option is available. I'd just as soon do the corrections in post and get it right. For me.
The Carl Zeiss 35mm has two operating methods that will vex Canon and Leica users. The aperture ring and the focusing ring go in the opposite direction from the other two systems. I usually don't change apertures continuously so that doesn't bother me and my brain seems to adapt to the focusing ring change without too much stress but for some people the reversed rings are a complete non-starter.
I picked up the 35mm f2.0 ZF for about $500, used and prefer using it to the Sigma Art series 35mm f1.4 even though I suspect that the Sigma is optically "better." There's something about the heft, the operational haptics and the slimmer diameter that appeal to me. And even though the Sigma might be better at the widest apertures I find that most of my use, these days, of semi-wide to wide angles happens at f-stops between f4.0 and f11 and try as I might I can't find a meaningful difference between the two lenses.
I think the advantage of the manual focus lenses comes mostly for users who have long practiced hyperfocal distance pre-focusing. I'm more of a seat-of-the-pants estimator, when it comes to distance. In a crowd I like to set the lens for f8 or f11 and set a workable distance on the lens's focusing scale. That way I can pick the camera up to my eye and shoot absolutely instantaneously. No AF lag, no hunting.
If I have time I might rough in the focus a little tighter by using the camera's focus peaking but generally, you have more depth of field at smaller apertures than you might imagine. For photography of non-moving subjects I take my time to place the focus exactly where I want it by punching in and using the camera's magnified focus capabilities to nail the plane with as much precision as I'll ever need. 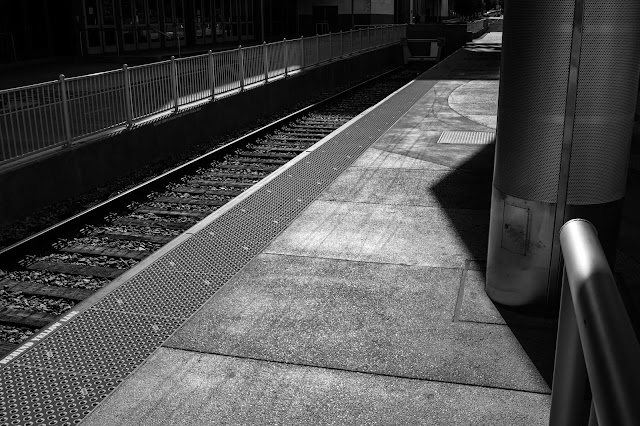 I used to pride myself on being a contrarian in most things and that extended to photography. While all my friends happily embraced 35mm and 28mm focal length lenses I was pretty steadfast in my intellectual allegiance to the 50mm and 85mm focal lengths. Maybe it was just my deeper interest in portraiture than in landscapes and street scenes. But the pandemic and the resulting paucity of working with people in casual portraiture these days has reformed my overall appreciation for different focal lengths and I'm coming around to enjoying the look of the 35mm. I still have a long way to go to appreciate the 28mm so, at least for the moment, I am safe from the siren call of the Leica Q2 camera with its fixed (too wide) lens.
Even though I've had the Zeiss 35mm for about six months the honeymoon period does not seem to have worn off. It's still my "go-to" lens when I grab for a 35mm. 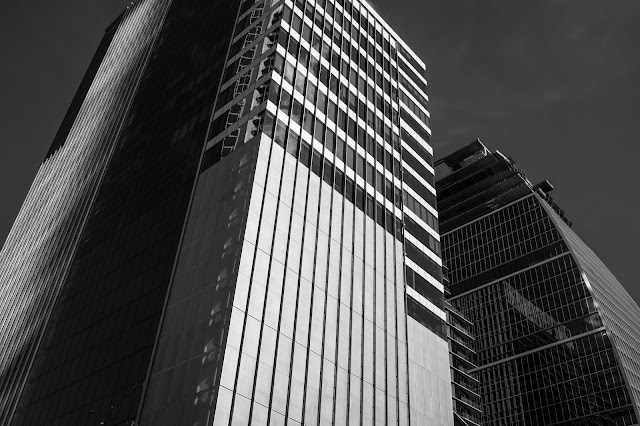 I wonder how it is that we get entrenched into our lens focal length silos. I have friends who swear by the 28s and some who have only a 24mm as their workaday lenses and they do excellent work with them but I wonder, how did they land in that wide view camp? I plead early adult poverty as my excuse for adopting and adapting to the 50mm focal length. The 50mm came along with the first SLR camera I ever owned and it was a couple of years until I really could afford a second lens. When I finally had the extra cash (this was during the student years....) I bought a good, but inexpensive 135mm lens which did an admirable job with the kinds of portraits I liked making then. It was another couple of years before I bought the third lens; a 24mm. I bought that one specifically to shoot interior shots for a homebuilder who was an early client. 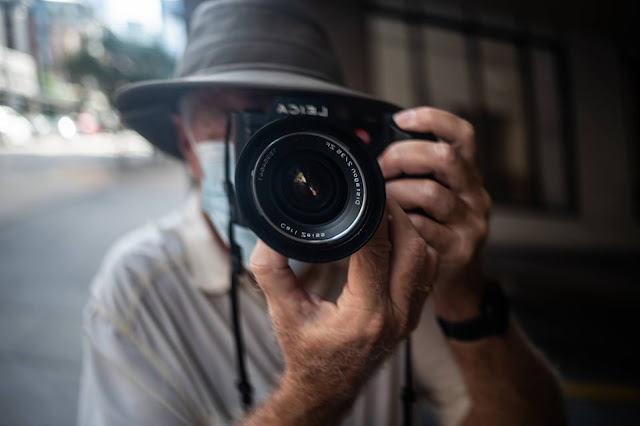 The view into a distorted, plastic, convex parking garage safety mirror.
When I went out yesterday I took along a lens I like very much. It's the Sigma Contemporary 65mm f2.0. I didn't have a photo mission in mind, I brought the camera along out of habit. I wanted the walk more than the photos; but I can't resist snapping away at possible scenes that represent snapshot moments of our ever mutating culture.
When I got back to the office and realized that I had photographed my friend's birthday party with the 65mm and then, later, shot a loop around downtown with the 35mm, and then book-ended those shots with the 65mm (again) yesterday. I started to get more interested in lens pairing with two primes. Assembling a shooting kit that would consist of just two lenses; each mounted on its own identical camera body.
It seemed to me that the pairing of the 35mm f2.0 and the 65mm f2.0 is more or less exactly what I would choose for travel, street and documentary photography all the time. At least with my current mindset. With each of those lenses mounted on a Leica SL body (my current favorite!) and all the settings matched it seems as though it would be a perfect combination for my quirky and tighter personal vision.
Just curious, what would your perfect combination be? No fair substituting a zoom. We'll cover those later.
I just hit the hour mark on the wait time. I guess I start on another blog shortly. Jeez.
Posted by Kirk Tuck, Photographer/Writer at 09:43 12 comments: