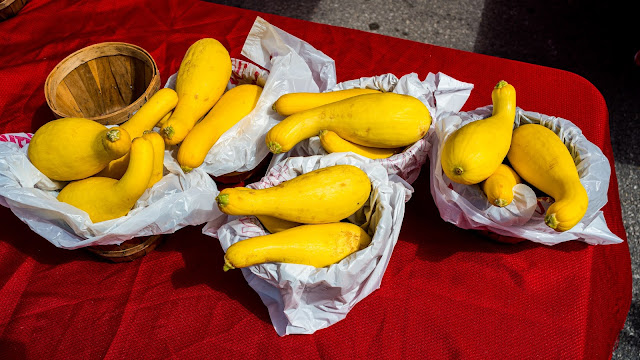 All the "drama" of last week washed away in the first hundred yards of warm up at swim practice today. The tax thing is taken care of, the new air conditioning seems to have insinuated itself into the office routine without missing a beat and my general attitude has improved by about 80%. I'm in the pre-production process of my upcoming, extended shoot and I'm in the boring "clean up the studio" part of the program. I don't start the job in any serious way until Thursday of the coming week and that gives me ample time to get into more gear "trouble" if I'm not careful. I'm sure there's some cool lens out there that needs a better home...
I had an interesting discussion last week with the chief of medical staff at one of our biggest hospitals. He was in the studio for a portrait. I asked him if the area doctors had started getting third doses of Covid vaccines yet. He laughed and said that every doctor he knew got their third jab at least a week ago and that I should rush out and do mine. I brought up the knee-jerk question about my "booster" dose somehow depriving someone in the third world from getting their first dose and he responded by saying that here in Texas (and by extension, all over "red" America) there are millions of doses in refrigerators that are going to be expiring....soon. They can't be repackaged and sent somewhere else. The distribution chain doesn't work that way. The Star Trek transporters used to instantly beam vaccine to all parts of the globe have yet to be invented. There are also rules and regulations about chain of custody with pharmaceuticals.
He emphatically said that it was so much better to get additional doses into people right now than it would be to watch them expire. I asked about the process of getting approved. He suggested I walk right into a Walgreens or CVS and just ask for one. If pressed I should tell them I am 65. He was emphatic that the questions would stop right there and the vaccine would be immediately forthcoming.
Today, after a grueling and competitive, but fun, swim practice I put down my yardage in my daily journal and then ate breakfast. 3200 yards well swum. My new "Michael Phelps" branded hand-paddles are really good at making swimmers pull correctly in their freestyle strokes and my technique is noticeably improved since I started incorporating them into the warm-up segment of my workouts. It was nice.
The humidity was lower this morning and so I decided to take a long overdue walk in downtown. It's a busy Saturday here since there is a University of Texas versus LSU football game here. Downtown was crawling with out-of-towners walking and gawking or riding around in big trucks screaming out the windows at pedestrians. So charming. If I were king of the world all sports except running and swimming would be banned. Oh sure, you could still do them on private property but there would be no tax payer subsidized stadiums and no college could have a de facto professional ball team on campus. Just swimming. And running. Football seems to bring out the absolute worse sort of fan... It's like a really bad religion. Or a cult.
On to photography. I've been reading a lot about the Leica Q2 camera. It seems to be one of the most popular cameras Leica has made so far. It's built around a very, very good 28mm lens, has a full frame 40+ megapixel  sensor and seems to be the super hot, must have camera for street shooters and artists everywhere. I want one but I want Leica to put a 40mm lens on the front, not a wide angle. But then I thought that might be one of my many irrational prejudices about cameras and lenses so I decided to root through the equipment drawer, find a 28mm lens, put it on a favorite camera and head out to see what the hell could be so charming about shooting everything with a moderately wide angle lens. I put the Carl Zeiss 28mm f2.8 (Contax Y/C version) on the front of my favorite Leica SL and headed out the door.
I figured I'd try my best to make the wide focal length work for me and it wasn't a complete disaster. The sun was high and bright in the late morning. I set the ISO to auto and set the minimum shutter speed to 1/250th of a second. With the fully manual lens (no talking to the camera) I could still make full use of aperture priority automation with a deft hand on the exposure compensation controls.
I also took advantage of the increased depth of field to minimize screwing around with fussy fine focusing and I set the lens to between f8.0 and f11. With most of my sunlit subjects the camera was routinely giving me ISOs like 64 or 80. Occasionally it would ramp up to ISO 160...at the highest. I was shooting raw but I still took time to set the WB to daylight just so I'd mostly be in the sweet spot of the ballpark, right there in center field. 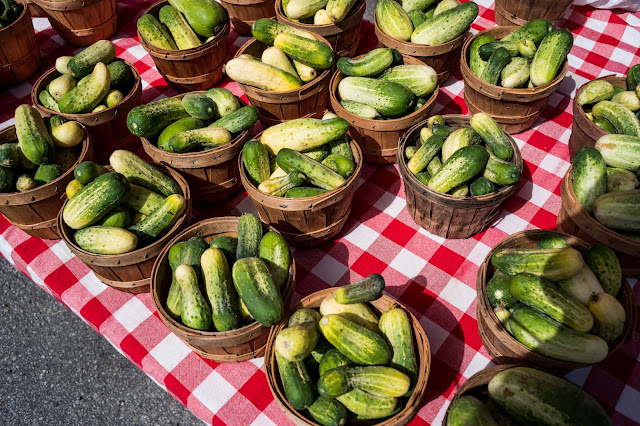 28mms is not nearly as intimidating as I led myself to believe. Sure, there's a lot of wasted frame but my artist friends tell me that's a benefit instead of a curse. I do like the increase in the visual effect of increased depth. It's nice if you have the subjects for it.
The most funny thing of the day was a series of weird camera coincidents. Near the start of my walk I went through a commercial shopping area and spied an older couple sitting at a café table and each of them had a camera either over a shoulder or in front of them on a table. Both cameras were Leica Q2s. I stopped into the REI store to look at trousers and ran into a thirty-something man with a camera over his shoulder. It was a Leica SL with an M series 28mm mounted on it via an adapter. Once I got into the middle of downtown I came across a hipster looking tourist sporting a recent M10 and....a 28mm lens.
That's more cameras in one walk that I've seen in a long time and all shared the theme of the 28mm. There must be something in the air.
I'm remembering my studies from a long time ago when an instructor at UT's Fine Art College taught me about street shooting one semester. His name was Garry Winogrand and at the time he was using Leica M series rangefinders, and almost always a 28mm lens. He told me to get in close to the main subjects and make the deep perspective provided by the near far exaggeration work for my compositions. I still remember him walking down the main drag, across from campus, with one loaded M4 + 28mm over one shoulder and a second M body with another 28mm over the other shoulder (so he would not have to reload film as often!!!) trolling for beautiful coeds to photograph. He was incorrigible. And funny. And passionate about photography. But ever the contrarian I stuck with a 50mm for a long time; even after coming within Garry's sphere of influence.
I think it's a bit tough right now to photograph people on the streets well with a wider lens. There are so many fewer people out and around and it seems that all the attractive ones are masked with the unmasked people won't make good subjects because my readers will just assume I'm making fun of the less attractive.
But I did give it a go today and I found that I liked a number of the angles I looked at. Whether the shots work is a different issue. But I got in about four miles more of exercise. And, by the way, that lens from the 1980s is pretty darn sharp and uninfected by too much distortion. If you find one for a reasonable price ($200) in great shape you should snag it. They can be adapted to just about any mirrorless camera. You'll thank yourself. 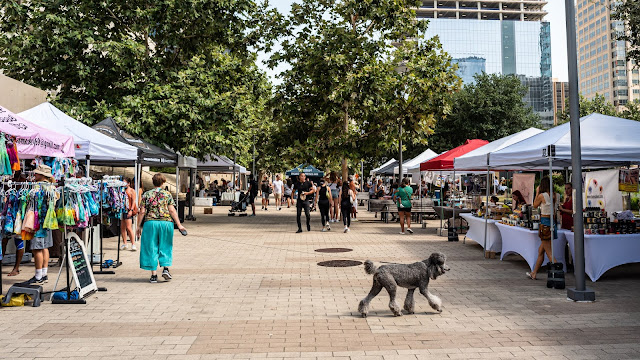 A dog and her human have a difference of opinion about where to go...
The farmer's market in Republic Park. 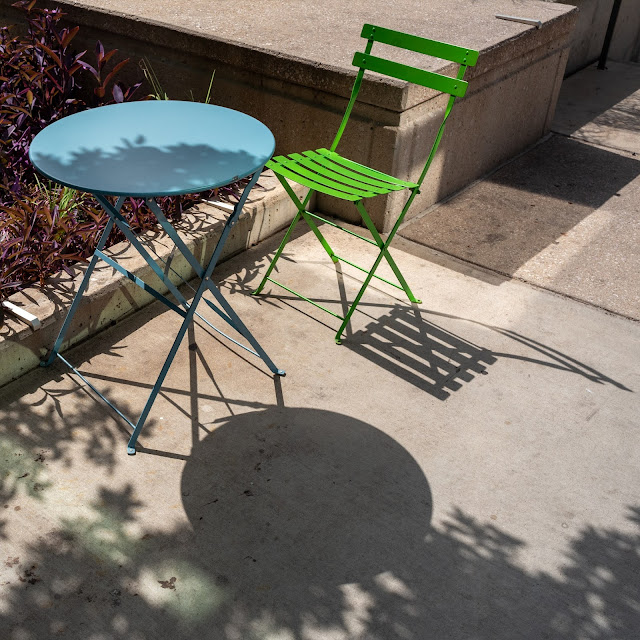 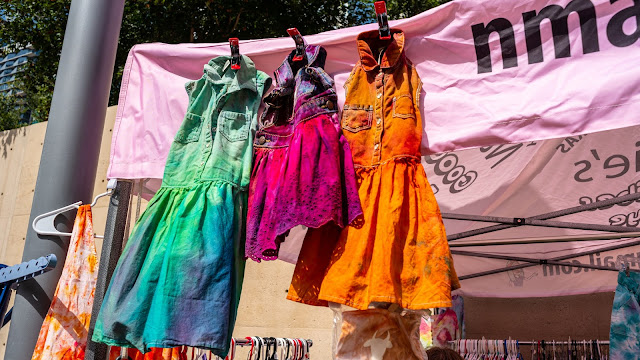 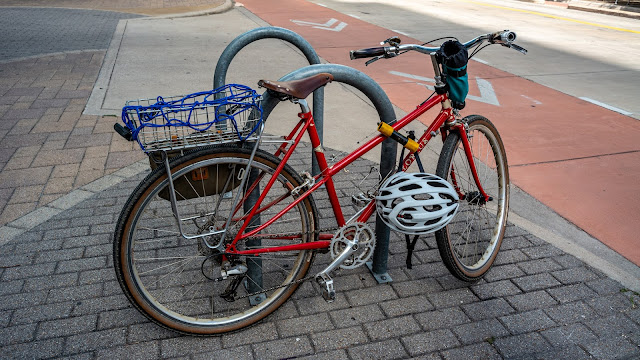 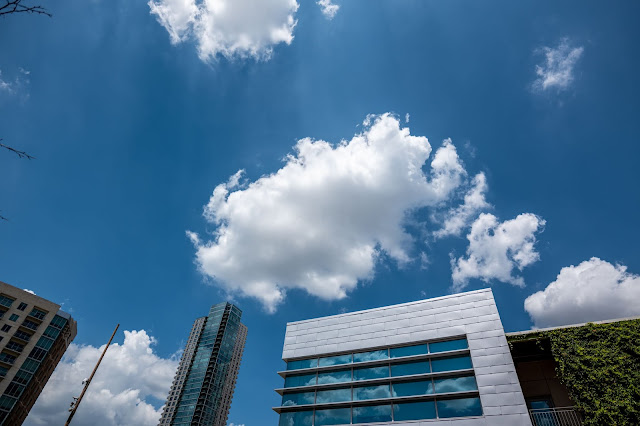 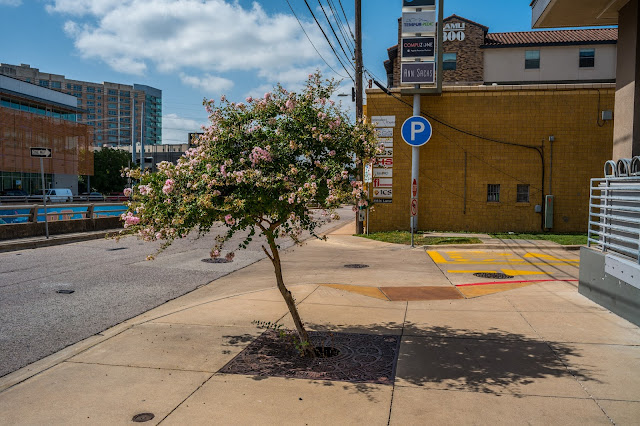 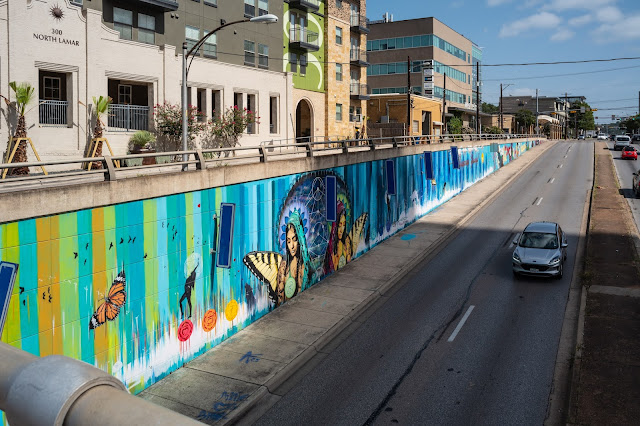 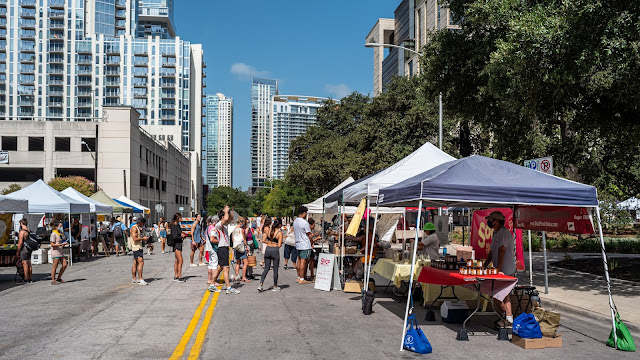 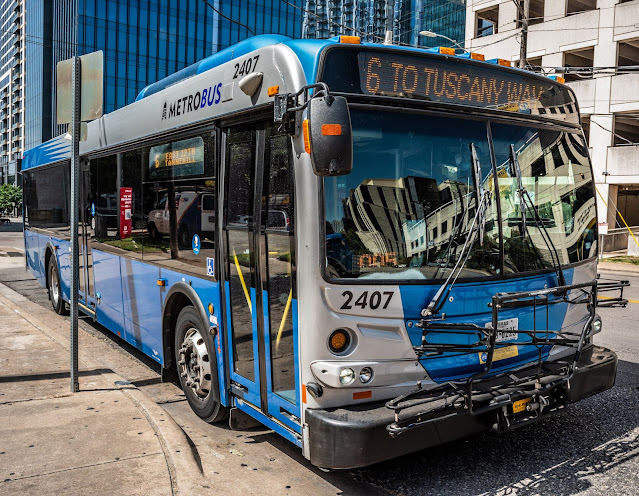 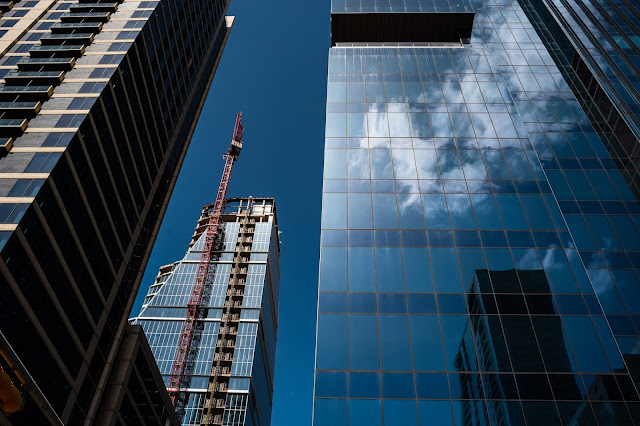 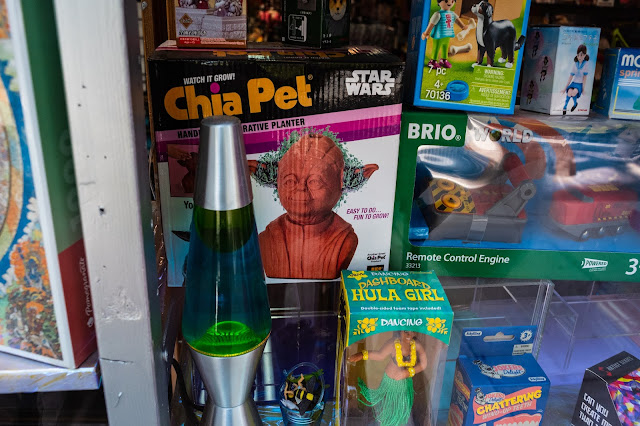 I almost bought the Yoda Chia Pet but I was incensed that the company would
refer to Master Yoda as.....a pet. No sale here. 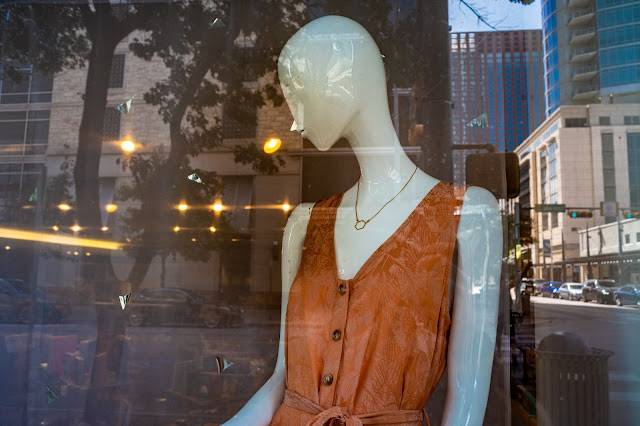 My mannequin girlfriends have changed costumes once again... 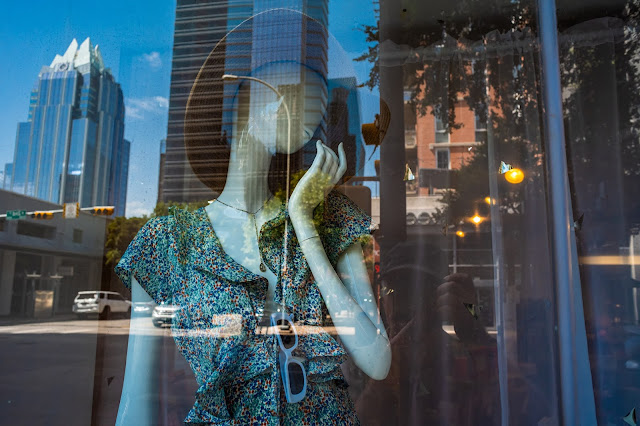 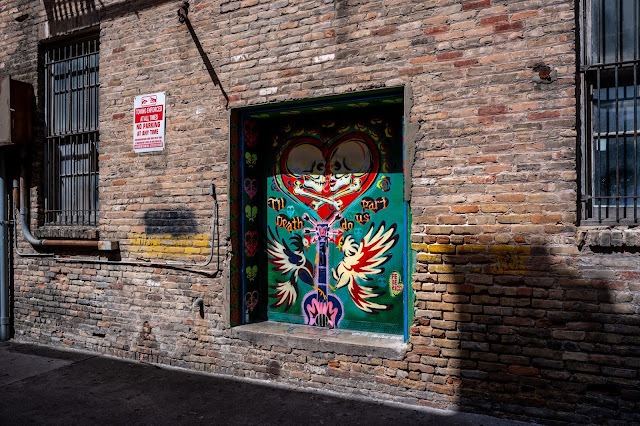 I guess a real brick wall test would be to meet the wall
head on. Parallel to the camera. But what the hell?
That's a formula for boring... 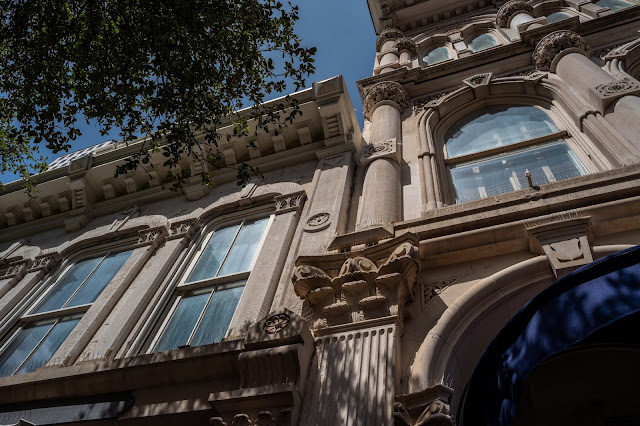 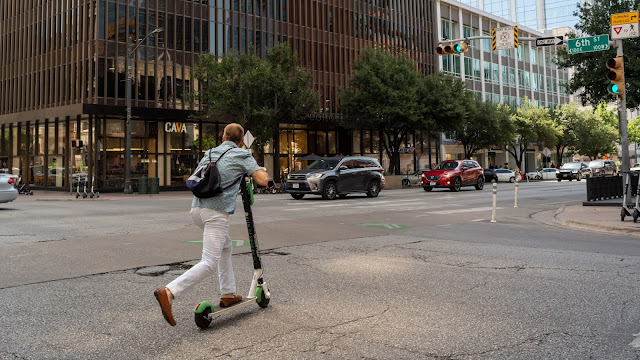 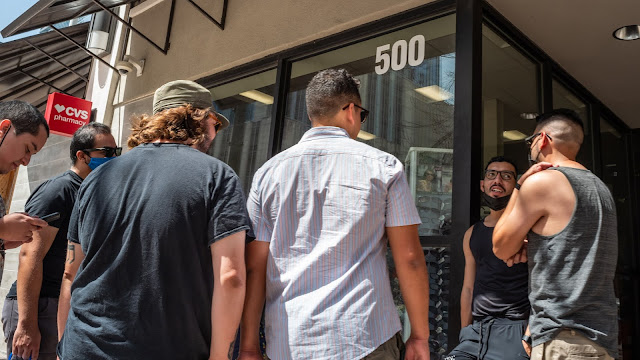 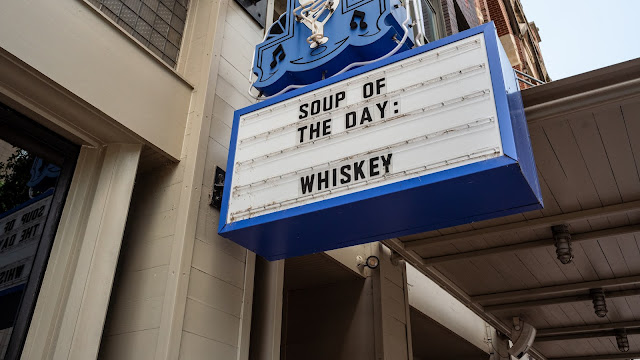 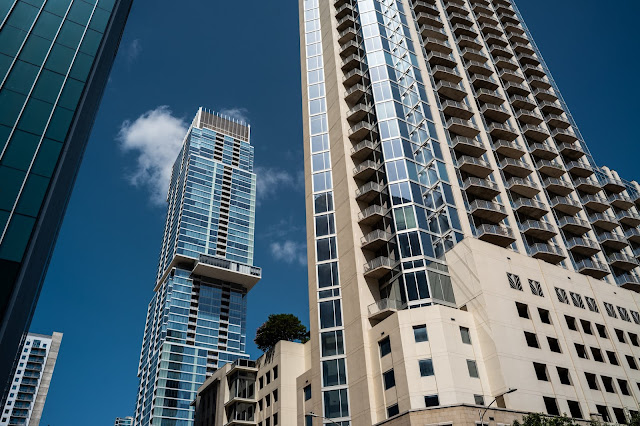 Thanks for reading. That's all I've got for now. Have a lovely weekend. Consider taking a camera out for a long walk. You might have fun.
Posted by Kirk Tuck, Photographer/Writer at 18:10 19 comments: