Walking with the Sigma fp in its full regalia. Tried a different lens on the fp. The Panasonic 24-105mm f4.0. It's been neglected for too long. 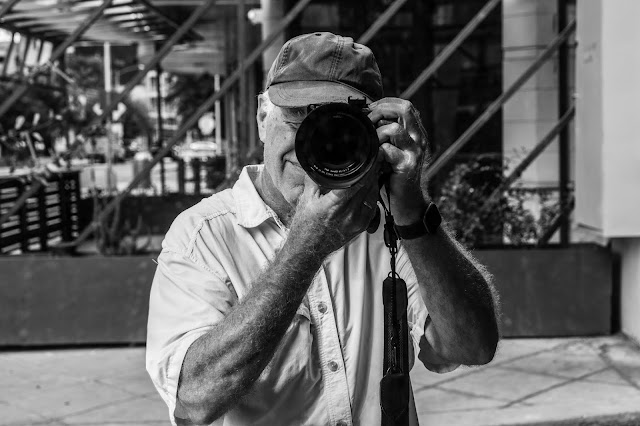 The mirrored windows on the building next to Pulvo's Mexican Food
on West Third St. are perfect for quick self portraits.
People give up on cameras so quickly. A lot of cameras are pretty much unfinished when first launched. It seems, lately, that they only hit their stride around firmware update 2.0. That was very much the case with the Leica SL. I played with one that had original firmware and then compared it to one of mine which has version 3.7 and they were totally different cameras. I'm finding this to be the same with the Sigma fp. A big, recent firmware update for that camera added a lot, made it quicker, and made the colors even better. It's now a great .DNG camera as well as a super-fun (and very, very good) Jpeg camera as well.
Today I was interested to see how much the monochrome color mode has improved. So I went out after lunch to make some photographs. Even though I am using SmallRig cage and the enormous Sigma loupe with the camera it was easy and comfortable to carry and use. I decided to go against my earlier knee jerk decisions to only put smaller lenses on the camera and this time used the Panasonic 24-105mm f4.0 lens. It balances well, is not too heavy and it a great "high illumination" shooter. By that I mean it really comes into its own, performance wise, when you shoot under conditions with lots of light. The lens adds image stabilization to the mix but I had the camera set to only shoot above 1/250th of a second so I kept the I.S. off.
Can the Sigma fp handle low light situations? Hmmmm. I guess that's all subjective..... Naw; it's not subjective at all. The camera is amazing at high ISOs. Don't believe it? The image just below; the only color one in this post, was shot at ISO 20,000. Not 2K but 20K. I was amazed. Yes, there's noise. But you have to blow the file up large and peep to find it... 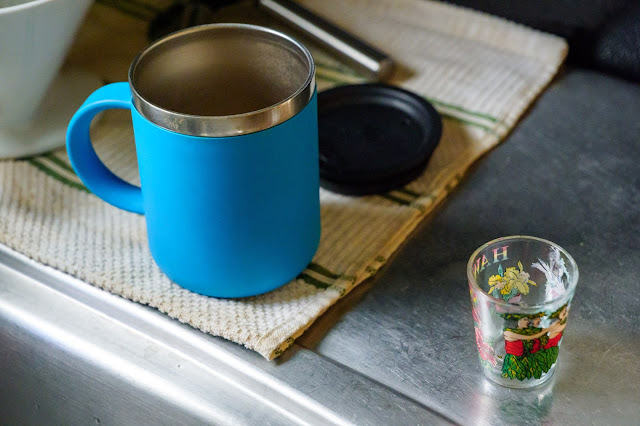 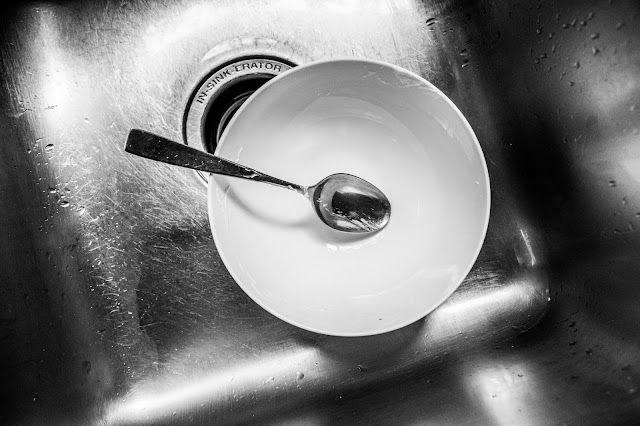 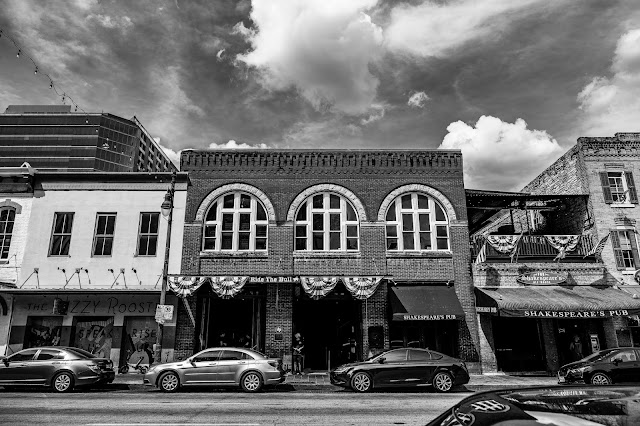 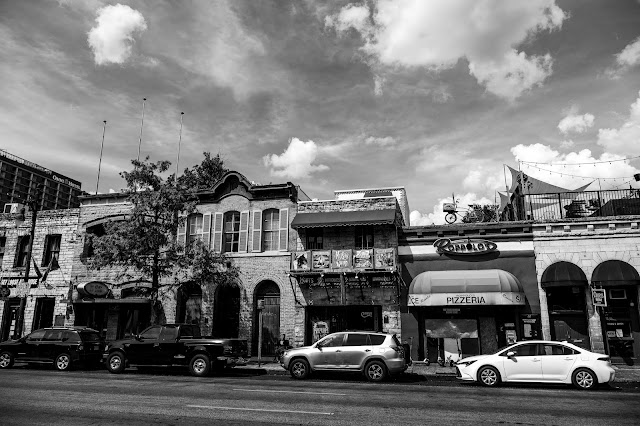 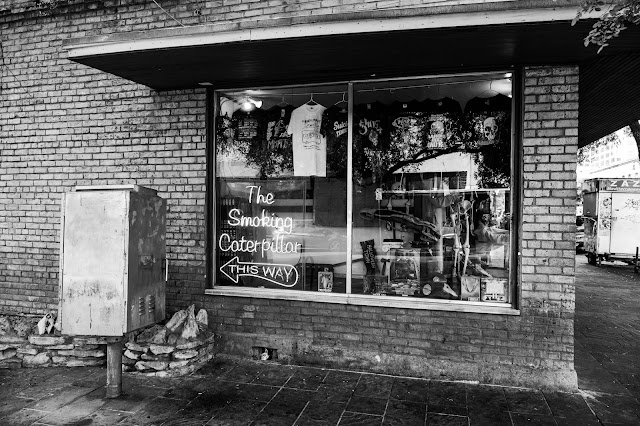 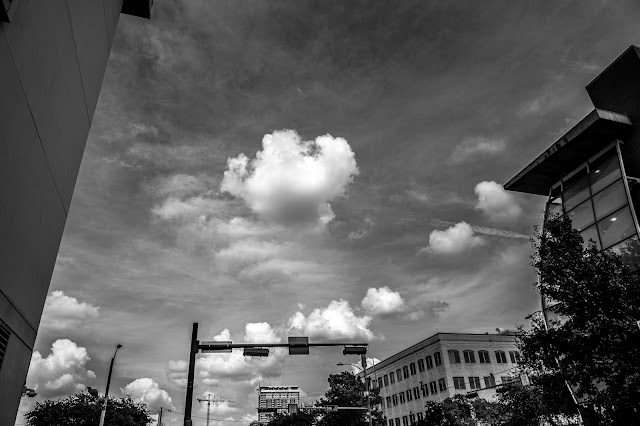 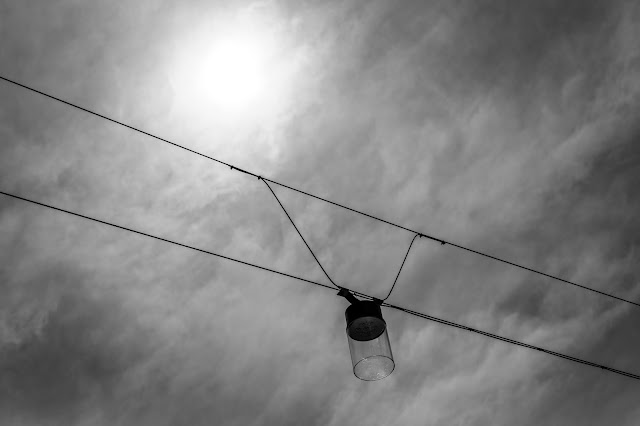 '
Shooting into the sun. Softened by high, thin clouds. 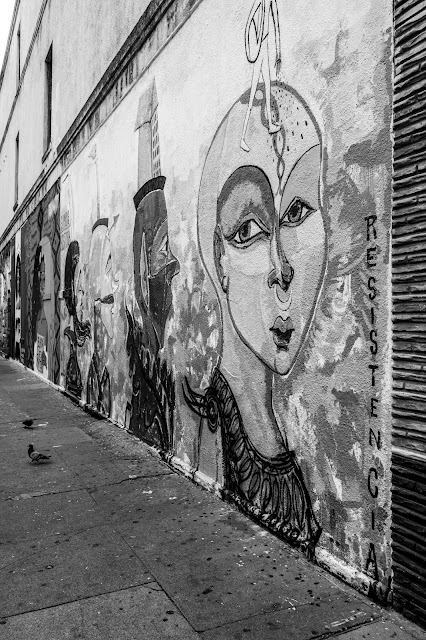 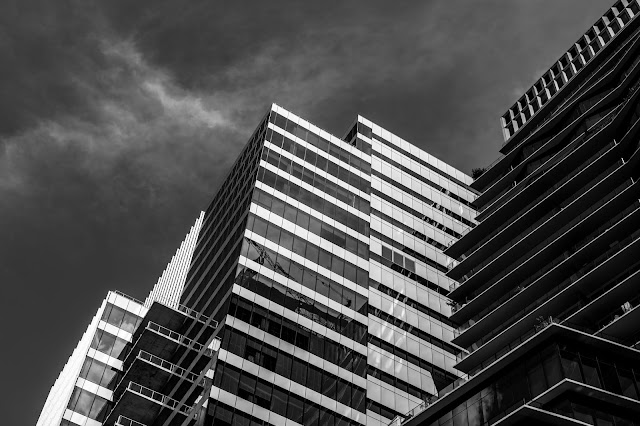 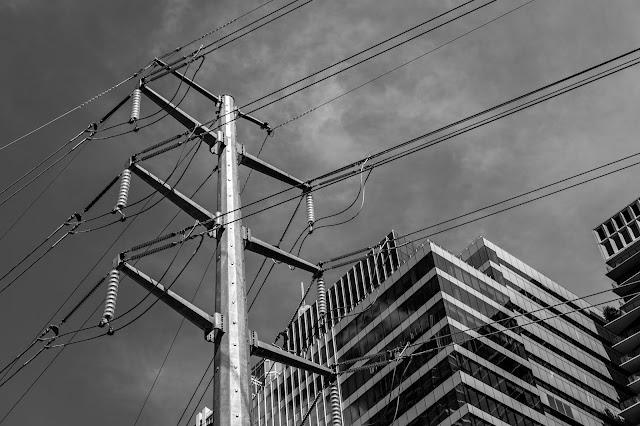 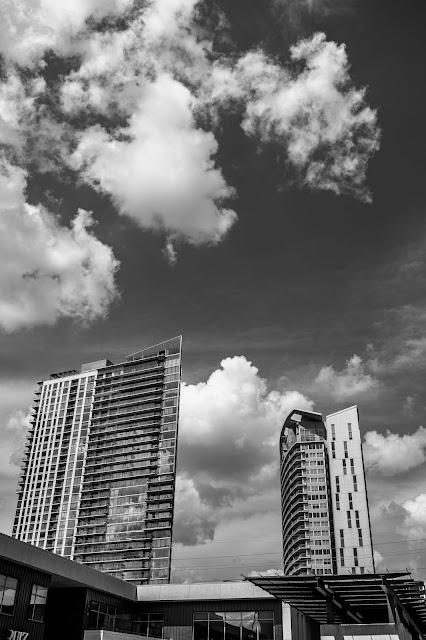 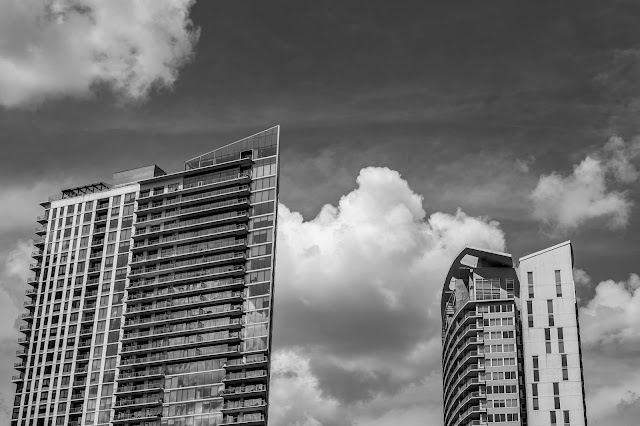 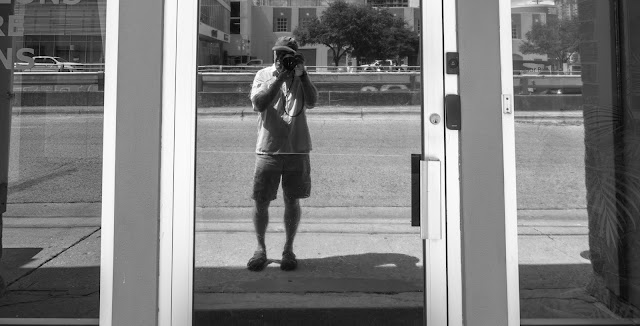 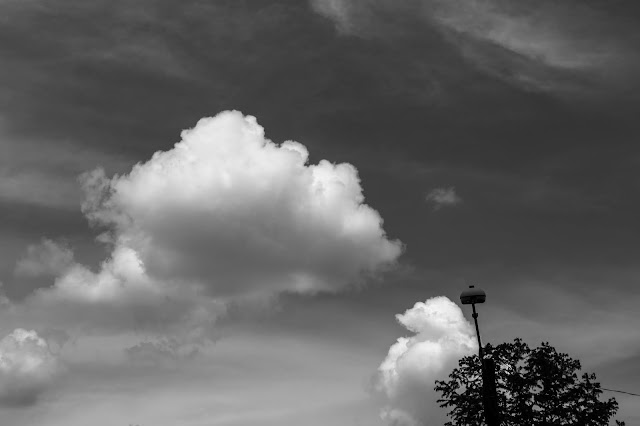 I think I'll call this series of clouds, "Equivalents" no one has ever done that before.... 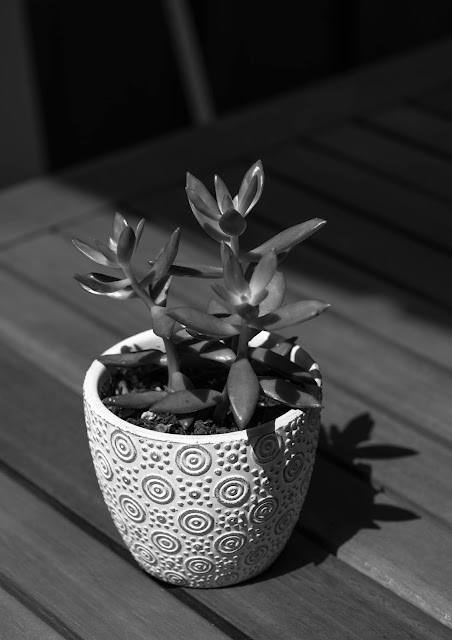 Succulent on the patio table.
Back in my Weston phase. 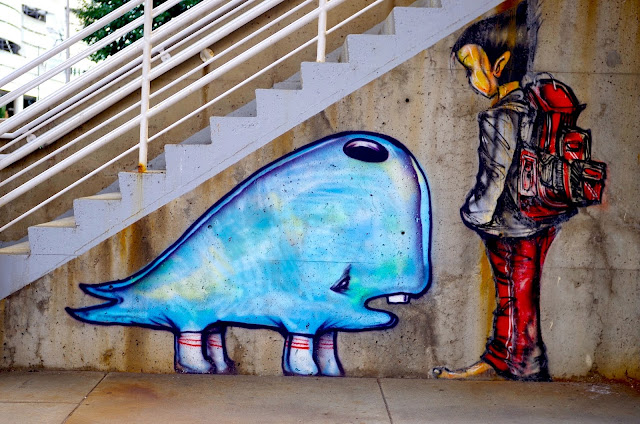 Totally unrelated graphic.
It's been nice here in Austin for the last day or so. Lows in the 60s and highs not much over 90° and with moderate to mild humidity. We have a lovely screened in back porch and it was finally cool enough to have dinner there last night. B. made a white bean and tuna salad and we munched on goat cheese and wheat crackers. A bit of José Gonzalez music playing over a laptop and a rare spot of quiet in the neighborhood. No leaf blowers, power washers, cars etc. It almost felt like a movie set portraying suburban life, post sunset, in the 1950's.

We went to bed early and got up late. I looked at the bedside clock (yes, a real alarm clock and not a phone) and saw that I had 15 minutes to get up and get myself to the pool in time for the late workout. I pulled yesterday's clothes on, stuck my feet in some old Crocs (which have now come right back into style) and headed over.

Today coach Chris was subbing for the usual Sunday coach. Chris is a towering figure at something like six feet, eight inches tall, was an All American swimmer in college, and is famous at our swim club for being a hard ass coach. But people love it. He has a "real job" in finance but never let go of his early Tuesday morning coaching slot; a workout that is generally filled to the gills with his swim fans. Some people just love to swim hard, fast, long distance workouts. That particular workout sees a smattering of Olympic medalists, NCAA champs, and other elite swimmers but per the club's mission statement for masters swimming there are always lanes for less gifted but not less dedicated swimmers.

Sunday mornings are usually laid back. Easier sets to make up for long weekdays and Saturdays of competition and pain. (But fun, transitory pain...).

I ended up in a lane with a woman who is a long distance swimmer and is quite good. She's done the swim around Manhattan and a number of other infamous swims such as the Alcatraz swim in S.F. I'm more of a sprinter so I deferred to her pacing throughout the hour.

We did a typical warm-up of around a thousand yards of mixed distances and mixed strokes and then Chris flipped the white board around and delivered his main set. It went something like this:

Repeat this until you run out of time. We got through four sets in my lane because my lane mate doesn't believe in either ample rest between sets or undue socializing during workout. We ended up clocking about 3,800 yards in the hour and were a bit out of breath at the end.

Lately, I've been working on the mechanics of my freestyle pull through; the power segment of the stroke. One of our coaches watched my stroke a few weeks ago and mentioned that I was turning my right hand during that part of the stroke and not presenting my palm perfectly flat to the water on the vital catch and pull segments. The slight turn of my hand made the stroke much less efficient. It's probably a glitch caused by laziness with technique. I've been using a special set of hand paddles in some self-paced workouts to help correct the shortcoming. The hand paddles are less rigid than the ones many of us use in training and as a result they flex and mostly punish you unless your technique is good. I'm making progress.

I've also been using my Apple Watch 6 to measure min and max heart rate during workout. When I sprint hard I can often hit 160-165 bpm. When I pace for distance I generally float along at 135-140. The real measure of cardiac fitness, or so I've been told, is how quickly your pulse drops from the maximum once you finish a set. We'll often check our pulses right after we hit the wall at the end of set and then a minute later. A 20 beat per minute drop is good, a 30 beat drop is better. As you get older it takes more time to drop the rate.

Just a reminder that almost any aerobic exercise is good for you but there are no health advantages to watching other people pursue their sports on TV. None.

Cool water. Nice day. Swim well, or do your own favorite thing.

Posted by Kirk Tuck, Photographer/Writer at 11:53 No comments: