Contemporary Studio Portrait with Michelle. Fun with cameras and people. 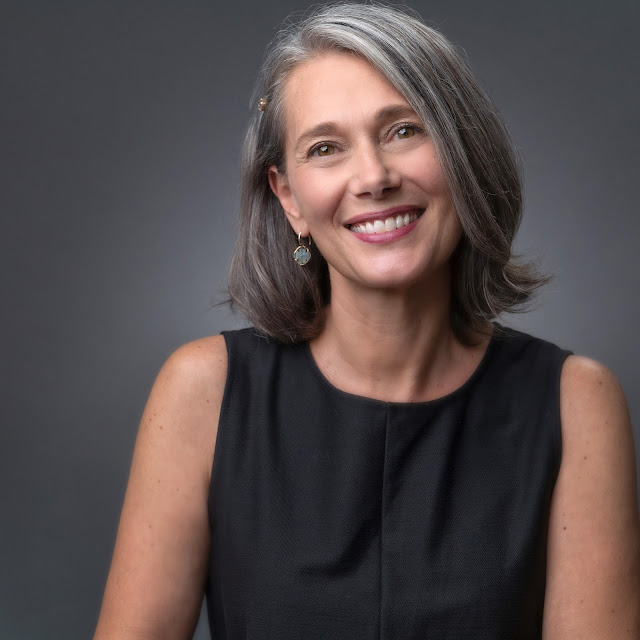 I have photographed Michelle many times over the last 30 years. We've cast her in fun, advertising "soccer mom" roles and in more serious roles as a "young, professional career person." She's always been fun to work with and fun to hang out with so when she called and asked me to do a new headshot for her I snapped to attention and got the studio ready.
Michelle and I think we've discovered the secret to a good rapport at a portrait sitting; it's mostly just hanging out and catching up with each other for about an hour, maybe a little more, and then finally getting down to the photography. If we try to push forward without the gab session it never works well for either of us...
The Leica SL2 had not been getting enough love lately so I decided to use that camera and the Leica 24-90mm lens. It's a nice match for a square portrait. All lighting done with LEDs.
I'm pretty happy with the results.  I guess I could work on the retouching a bit... but I think we have the rapport thing figured out...
Posted by Kirk Tuck, Photographer/Writer at 18:32 7 comments:

Standard Zooms versus Primes. Which is, overall, the better choice? 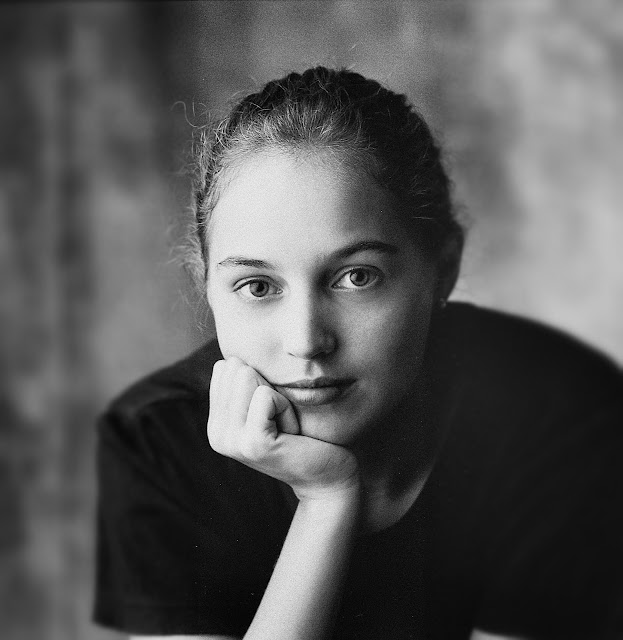 Back in the days of fixed camera to subject distances, slow film and
the leisure time to make every prime lens work.
In the earlier days of my career as a photographer I was a totally committed prime lens (single focal length per unit) photographer and I didn't "waste" my time with zoom lenses. Everything I shot, for at least the first twenty years of my romance with photography was done with a single focal length lens. A big part of the reason for that is I mostly shot with a four by five view camera and medium format systems. There were no zooms that I am aware of for 4x5 view cameras and the few zooms made for the Hasselblad and Rollei MF systems were big, slow and of very limited focal length ranges. You really, really needed to need an MF zoom to consider getting one...
Even up till the late 1990s I was highly resistant to zoom lenses. I presumed that the prime lenses I was using on Leica R cameras and Leica M cameras would always be superior choices when compared to zooms. And that was probably true until about a decade into this century. The way I saw it, up till around 2006 or 2007 was that there were advantages to both zooms and primes but for my particular line of photographic work the primes were a better choice.
A lot of my prejudice was based on the presumption (based on actual and anecdotal evidence) that early zooms weren't quite as sharp as primes and all of them were heavier and slower than my collection of primes. But shooting weekly at the theater for the last 20 years made me shift...a lot.
Here's where I see the argument between the two kinds of lenses now: The performance of the lenses at the same apertures is such that for most work the best zooms are equal in image quality compared to most primes. There are situations (live theater, performances, sports) where the flexibility to immediately change focal lengths without stopping the whole process is critical. Zooms win; hands down. I don't really care if my 85mm f1.4 is X% sharper than my 70-200mm zoom if 85mms isn't the right focal length for what I need to shoot. Right now. In the moment.
Old days? With rigid lighting set-ups, slow films and Polaroid testing one had ample time to reach into a bag full of lenses and find exactly the right one for the job. Things are not the same now. Being able to change framing and subject size in an instant can be priceless. Certainly worth giving up that small percentage of nano acuity we seem to have been mindlessly chasing... We are not anchored in space like we used to be...
There used to be a trade-off in size and weight between the more compact primes and faster zooms. The zooms were always bigger and always weighed multiples more. Now, lens makers and lens buyers happily accept enormously large and ponderously heavy single focal length lenses such as the Sigma Art 85mm f1.4 (first gen.). It's at least as big as my 24-70mm f2.8 zoom and much heavier. The contrast between modern, high speed primes and the Panasonic 24-105mm f4.0 is even clearer. Now a bag of top quality primes easily outweighs the same range of focal lengths that would provided by two or three zoom lenses.
In the days of yore (pre-AF, pre-digital) we needed faster lenses for two reasons (and "bokeh" was not one of them). We needed bright viewfinder images so we could accurately focus and we needed fast apertures so we could get usable, handheld exposures with the popular film emulsions of the day; which were mostly in the ISO 100 region. Think: Fujichrome 100 and Ektachrome 64. Even though digital cameras are breathtakingly better at ISOs like 12,500 lens makers endless buyers continue to gravitate toward making ever faster and ever bigger prime lenses. And the truth is that we don't need them anymore. At least not for focusing or exposure reasons. 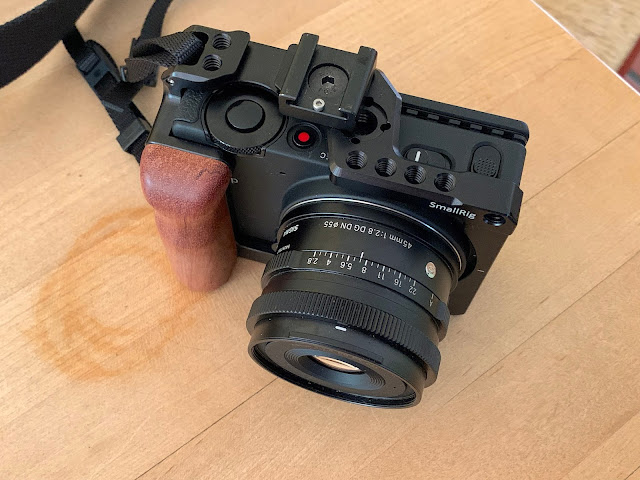 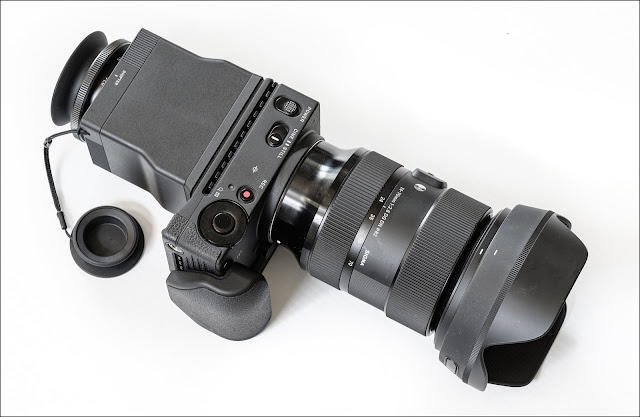 Exercise: I decided to use the measuring capability of my Apple Watch to get a read on my oxygen uptake (VO-2 Max) just for fun. To see where I fall on the curve; so to speak. Apple's fitness app suggested I do a fast walk on a fairly flat surface. The watch would monitor my heart rate, pace and time elapsed and would give me a decently accurate reading. But it did warn that a precise measurement would require a much more controlled set up....
I skipped swim practice on Sunday and instead did a four mile walking course around Lady Bird Lake. According to the watch my pace was 14 minutes per mile, give or take a few seconds, which meant the four mile course took a total of 56 minutes. My average pulse rate for the hour was 120 bpm with a high of 130 bpm (going up an extended ramp). My calculated VO2 Max was 41 which put me in the top quartile of people 60-65 years of age. I was pretty happy with the numbers and it was a fun experiment. Later in the day I did a slower loop through downtown, with a camera. That was much more fun.... 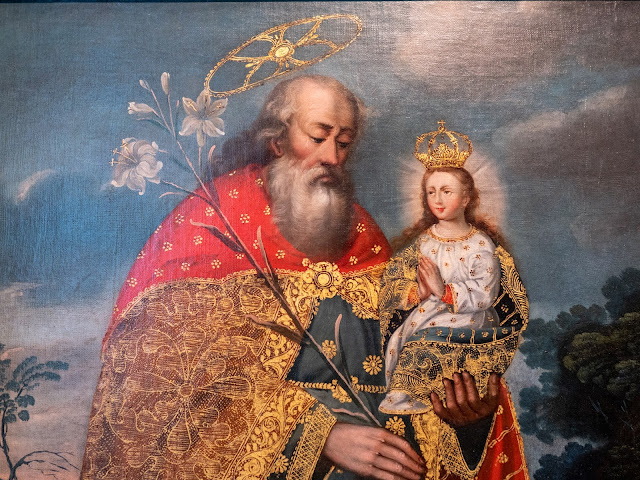 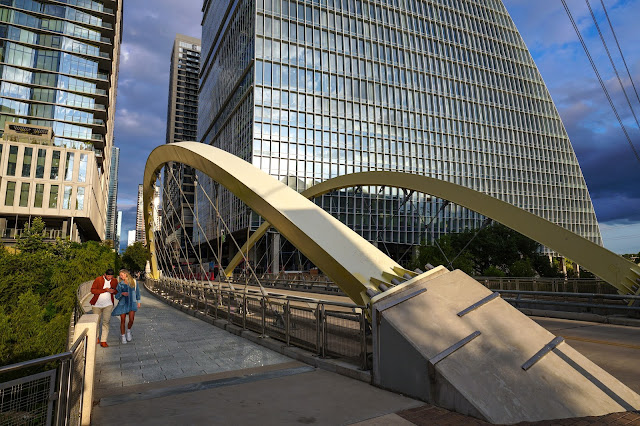 The benefit of a nice, wide zoom is the instant flexibility it can deliver.
The advantage of a prime is...it's a prime.
Posted by Kirk Tuck, Photographer/Writer at 12:56 24 comments: