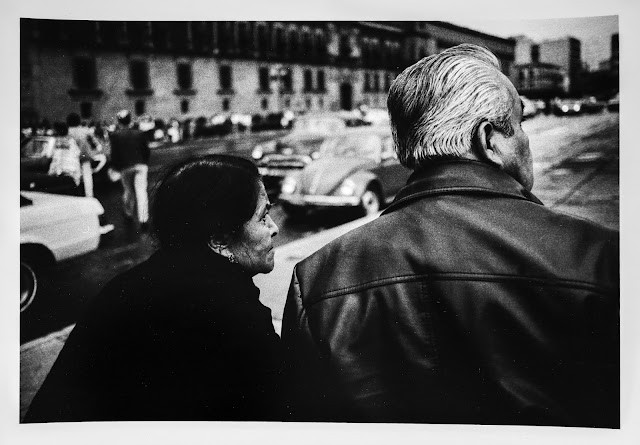 Walking aimlessly through Mexico City.
In 1982 I was working mostly as a copywriter and more haphazardly as a photographer. It was early days for me as a photographer and I had only just mastered (become barely competent?) at developing my own Tri-X film and making my own black and white prints in our co-op darkroom. Times were easy back then; Austin was cheap and opportunity was hiding around every corner. We were just heading into Summer and I'd wrapped up my teaching duties at UT. I was between jobs and waiting for projects to boil up from the creative minds of the ad agency people I'd started to write for.

One day in June I rode down from Austin with Belinda in her car (I only had a bike at the time) to visit my parents in San Antonio, B was visiting her parents a couple miles away.  I was just hanging out with family a bit, getting free meals and access to a free washer and dryer. You know, ex-student standard operating procedures. And in the middle of one warm morning it dawned on me that I was bored. I'd read all the books I brought with me. I'd recently bought a well used Leica IIIf red dial rangefinder camera that came with a collapsible 50mm f3.5 Elmar lens and I taught myself to trim the film leader so it would load properly into the camera. It was....primitive. But I more or less got up to speed with the controls and even became somewhat comfortable using the rangefinder for focusing. The rangefinder window was deal-killer tiny and it was separate from the window through which one composed. The composition window as roughly equal to the angle of view of the 50mm. There were no bright lines, no switchable frame lines, etc. for any other focal length. If you wanted to use something like a 28mm lens on that camera you could focus via the rangefinder but accurate framing would require you to buy a separate bright line finder that you would place into the hot shoe. Still, it was a small, light and unobtrusive camera...and certainly not the kind of camera anyone would think of stealing in 1982.

I called B and told her I was bored and planning to make an impromptu trip somewhere. She wished me luck. I called around to the various airlines and found a super cheap flight on Air Mexicana to Mexico City. And, by "super cheap" I mean something around $68 roundtrip from San Antonio. I went to a used book store and bought an old travel guide to Mexico City and then packed. I carried one small backpack with a couple changes of clothes. I didn't need a camera bag because all I took was the small camera and 15 rolls of home rolled Tri-X. That and an ancient, screw mount, 50mm f3.5 lens... 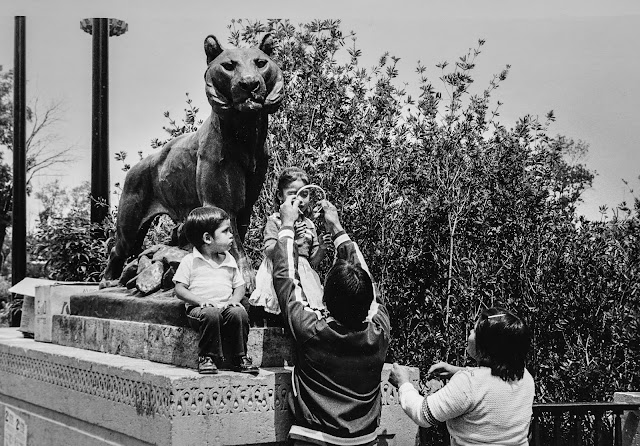 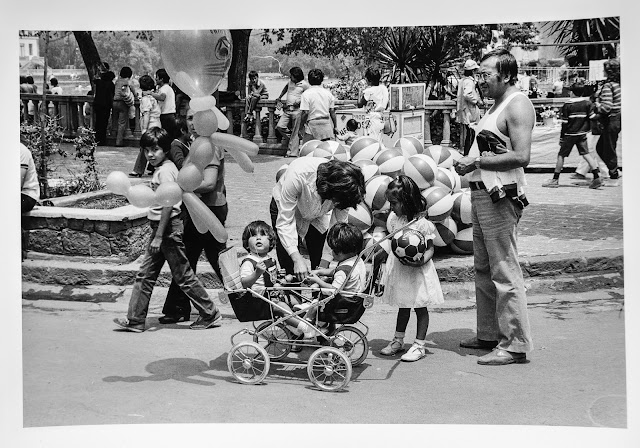 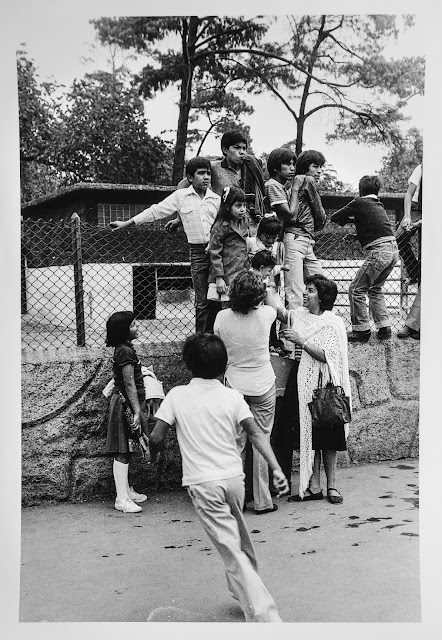 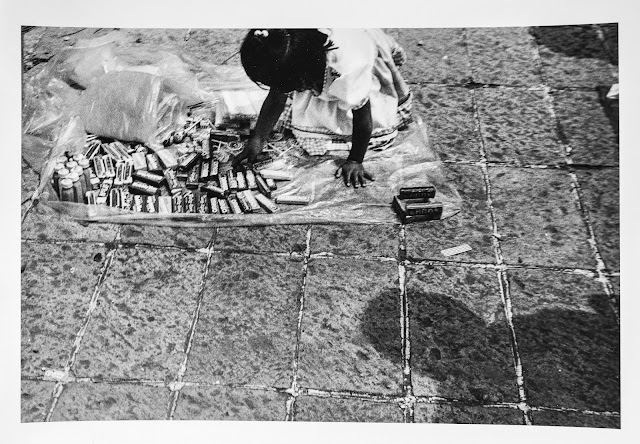 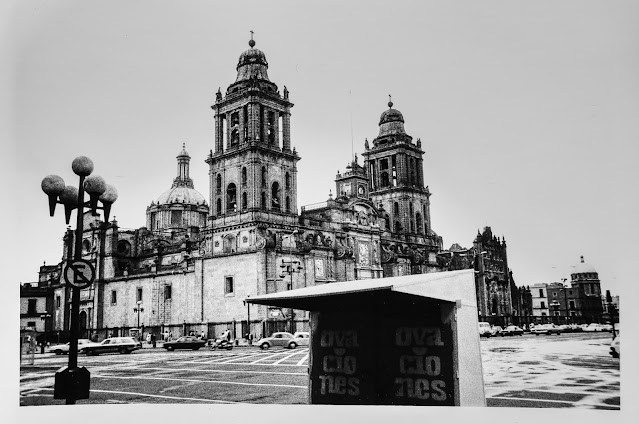 The Cathedral at the Zocalo. 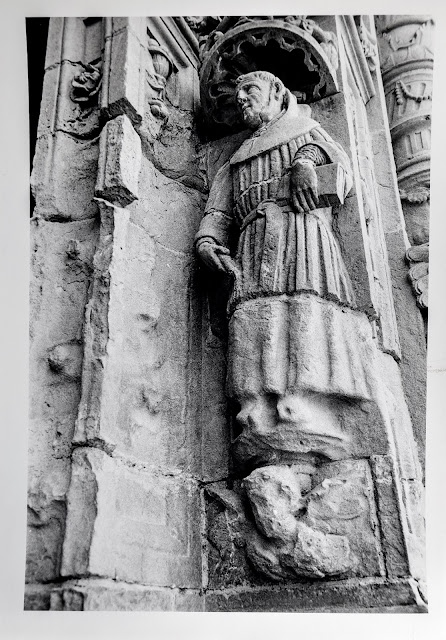 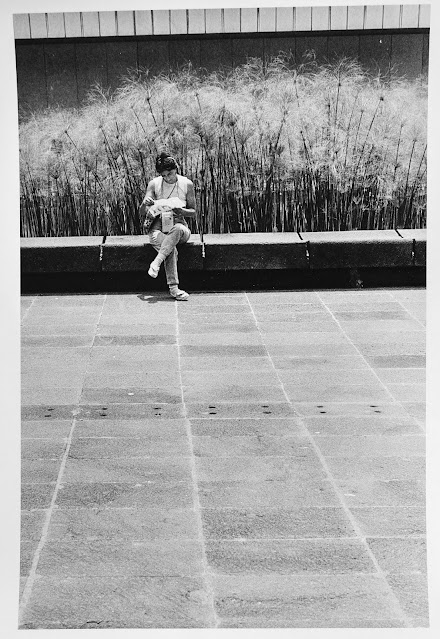 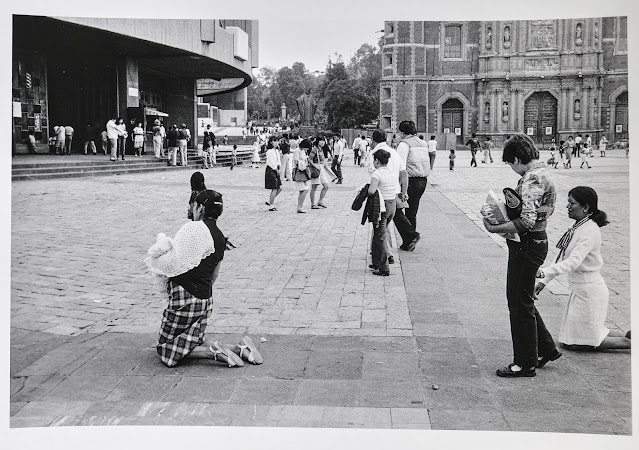 Worshippers traveling on their knees. 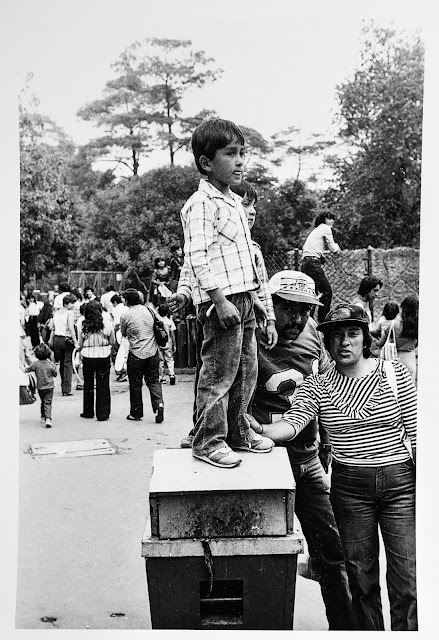 King of the park. 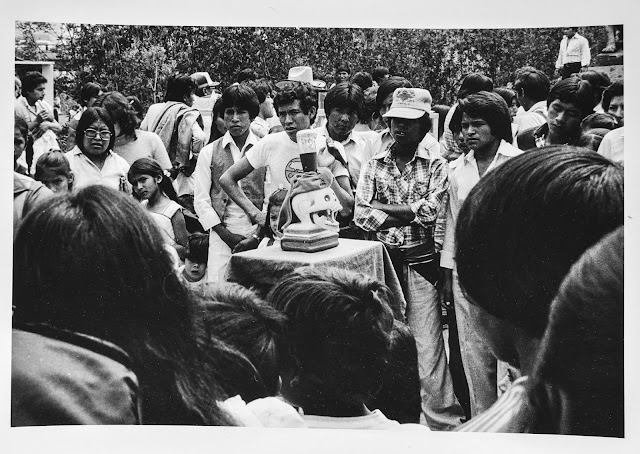 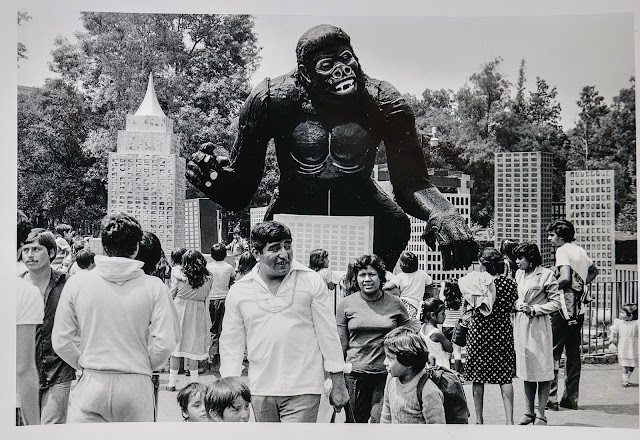 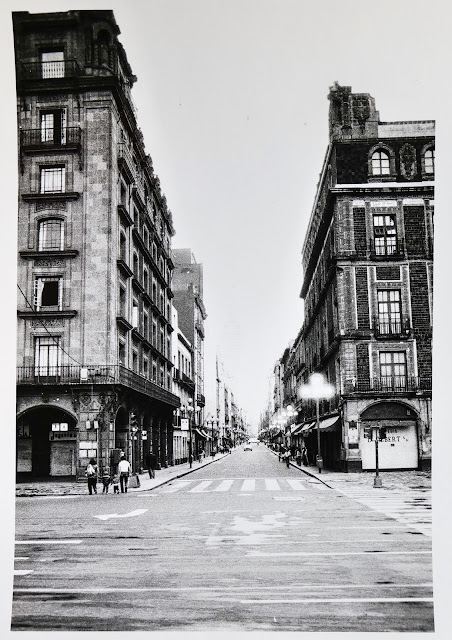 My hotel was the building on the left... 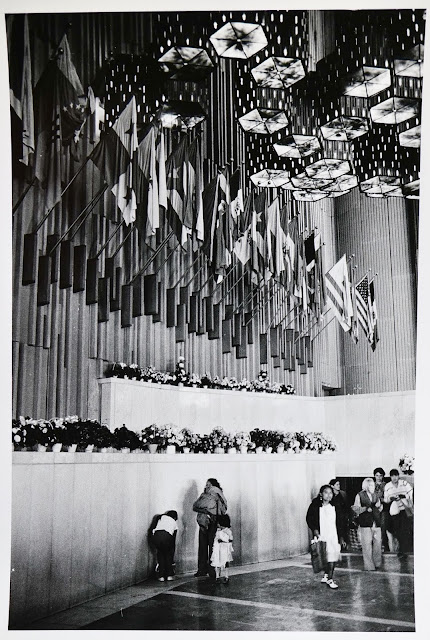 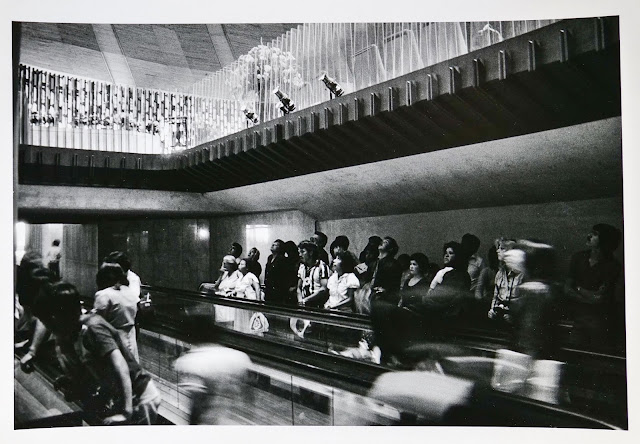 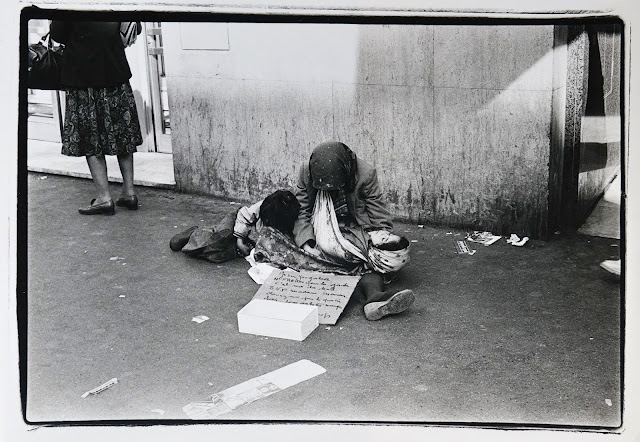 Texans didn't need passports to travel to Mexico back then, just a drivers license. You did have to make sure you saved $15 for the airport tax in Mexico City in order to get back home... There were no "on line" reservations back then, no cell phones for normal people, etc. I got a ride over to the airport, hopped on the next flight and three hours later I was in the middle of a packed airport in a totally unfamiliar city.

I'd just gotten my first credit card two years earlier and thought it would be the magic ticket for the trip but most of the places I stayed and most of the restaurants I visited didn't take credit cards. That meant tightly budgeting the $300 I brought for the five day visit. I stayed on the fourth floor of a hotel on the Zocalo which was just around the corner from the big, famous cathedral. The hotel was old and great and had a café on the rooftop. The only downside was the every morning band practice for a 300+ member military marching band which struck up each day around 7 a.m.

Every day I'd plan to see something new and different. Mostly I walked but occasionally, like the day I went out to see the pyramids, I had to go in a small tour bus because of the distance. With a very weak command of Spanish and being entirely solo I was often totally confused about signage, instructions and warning signs but most people have a good nature and no one let me walk out into traffic....

I spent days at the giant park in the middle of the city. I loved walking around looking at menus for fancy food I couldn't afford in La Zona Rosa. I loved shopping in the national pawnshop (sadly, no good cameras...). I loved drinking Sanka while having heuvos rancheros at Sanford's House of Tiles. And I loved the thrill of walking the length of the Reforma Blvd. at two in the morning. As a goofy kid with a forty year old camera and third hand clothes no one ever gave me a second glance. The city was easy back then.

Odd to think that in 1982 one could be, for weeks at a time, totally off any grid. Off THE grid. No cellphone tracking. No credit card tracking. The only thread attached to any system was the airline manifest and I'm sure Henry White could have easily dodged that. It was sweet to be lost from the system. It was even sweeter to be totally unencumbered by clients, family, significant others, etc. No time table, no agenda, and no deadlines. Just walk out the front door of an ancient hotel, small Leica in hand, and a couple rolls of film in the pockets of your frayed and faded Levis. Letting the electric flow of a city of 20 million people pull you along.

Rolling back into San Antonio, I walked to my parent's house from the airport. It was only a couple miles away. They took me out for dinner and when I got back to their house I did a load of laundry. The next day B came by to collect me and patiently listened to all my breathless stories on the hour drive back up to Austin. She deposited me at my co-op studio on 7th street, in downtown and I got to work, all excited and energized, developing the twelve rolls of film I'd shot. About 72 frames per day. A tiny, tiny fraction of what I might shoot now in an afternoon.

Maybe there is a lesson for me in all of this... Can't quite see what it is though. Free laundry? 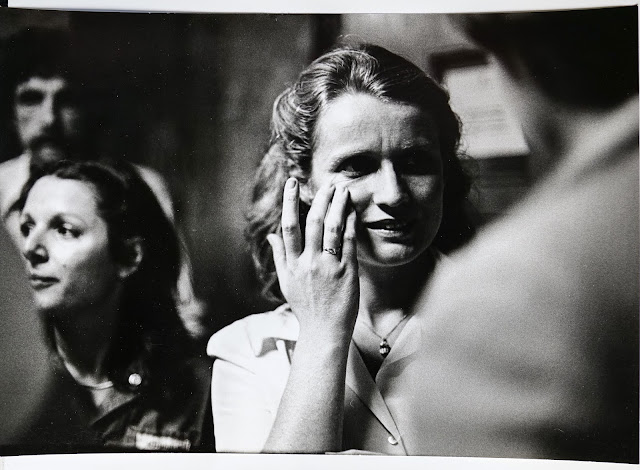 The French Actress, Marie-Christine Barrault.
Nominated for an Academy Award for her role in
Cousin, Cousine