Why oh why would anybody splash out hard cash for a twenty-seven year old "nifty-fifty"??? 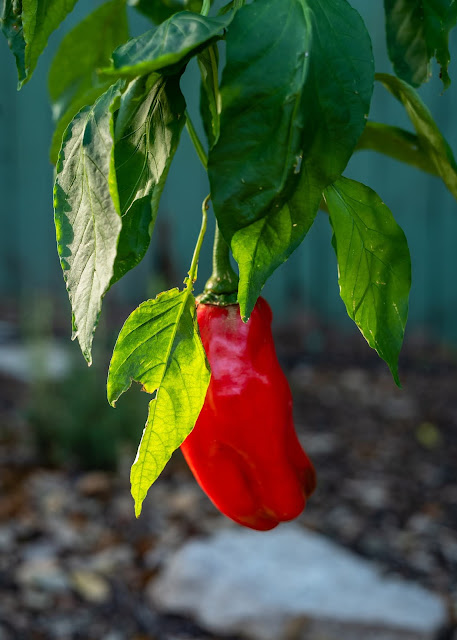 Well....in the case of the Leica 50mm Summicron R lens the lens does render colors very, very well. Even when I'm using it at f2.0, or in this case, f2.8. Ms. B has been growing red bell peppers in the herb garden just outside the dining room windows. I thought the pepper and contrasting leaves would make a good study in color and dynamic range response. It was shot handheld with a Leica SL. I think the combination works, even thought neither the lens nor the camera has the magic image stabilization.
But one sample doesn't always convince me. Sometimes the camera and lens just get lucky. So I thought I'd better take the fully manual, ancient technology lens out for a walk. I anchored it onto the SL camera with a cheap, Urth brand adapter and wore comfortable shoes. 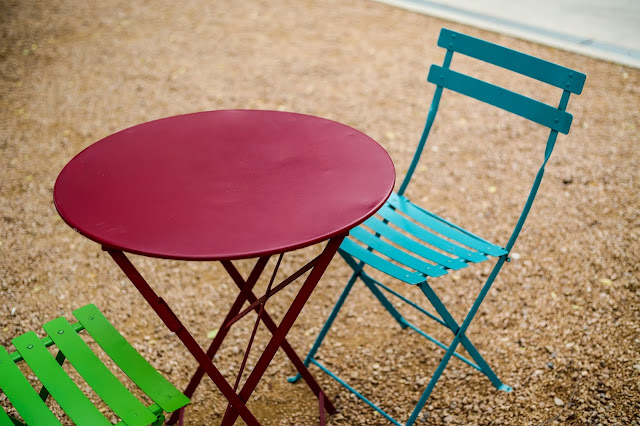 To push the lens a bit and see how it performs under duress I shot almost everything as close to wide open as I thought practical. Some shots wanted a bit more depth of field by most worked about as well as they were destined to work wherever I set the aperture.
For some reason I really like the colors on these little café tables in the park at the Seaholm project. I sat at this table the day before, reading a good book because I was early for an appointment. Once my clients arrived we ended up shooting three different environmental portraits in and around this location. Believe me, with all my assorted walks this area has been well scouted. I also like this location because the dog owners in the surrounding condominium towers cut through here when they head out to walk their dogs over to the hike and bike trails. I love watching the dogs. They have an enthusiasm that most of us will never match. 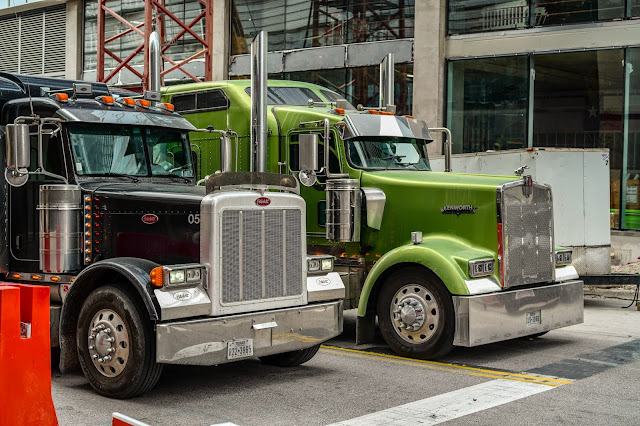 The two giant trucks just above were blocking off part of an intersection over on 2nd St. They were there so workers could on load huge pieces of a construction crane that was being dismantled. The crane had been used on the big "Sail" building project which I showed sample of a couple weeks ago. It's quite a project. The trucks don't have far to go because they're starting on another building project just on the other side of Congress Ave. It's a few blocks away. I figure any time a company blocks off an entire street they are just begging for photographers to come around and take photographs of all the heavy equipment. 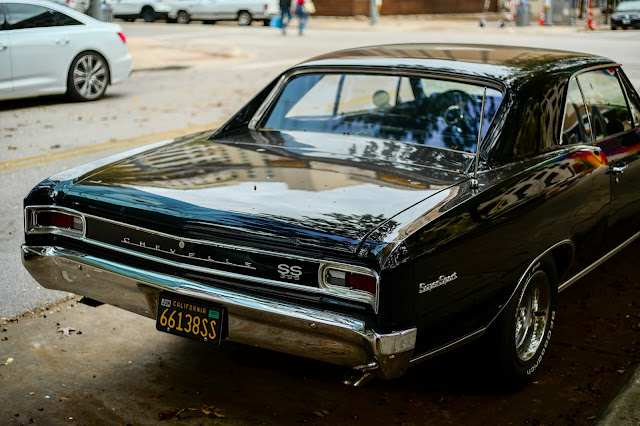 Speaking of heavy equipment...this is a Chevrolet Chevelle, SS 396 that's been beautifully restored. My friend, David, had one of these in high school and we used to cruise around San Antonio in the Summer when all we had on the schedule was twice a day swim practice. Ostensibly we were out to "pick up hot chicks" but it never really worked out that way. The car, however, was fast as lightning and David spent more money on rear tires than I thought was conscionable. A bit less throttle would have saved a lot of rubber.
But the car reminded me of my beginnings as a photographer. Back in the days of color slide film just about every roll I bought was rated at ASA (think: ISO) 64. That meant in order to get usable shutter speeds most of the frames I took were shot at wide open apertures. It imparted a different look. The image above reminds me of shots from those much earlier days. In fact, as I walked around and reviewed some of the photos today I started skewing more and more toward that wide open sensibility. I really like it. Funny, my memory of the Summicron being a good performer when used wide open pushed me to work more like I used to. interesting what changing a single parameter will do... 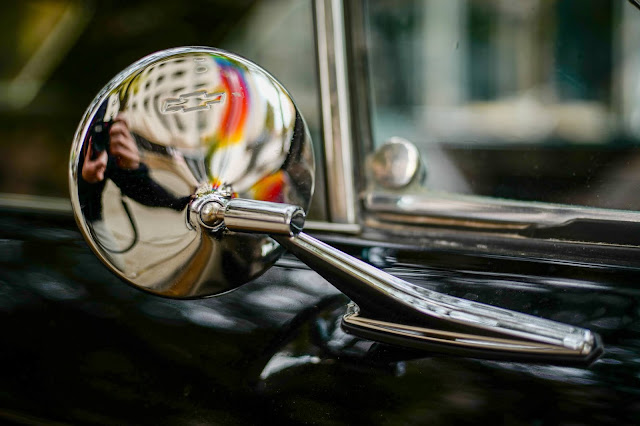 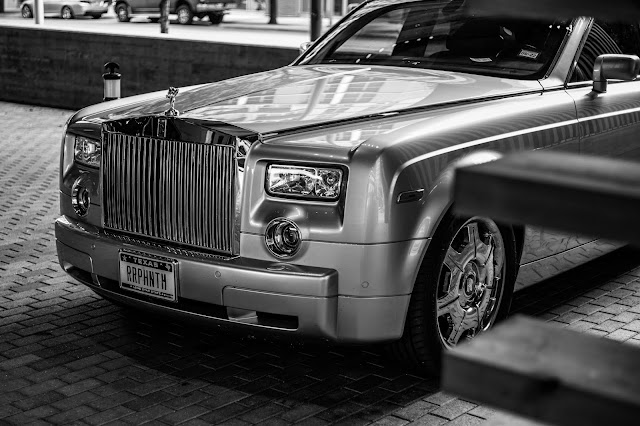 I know the build quality of English cars leaves much to be desired but this particular example reminds me of the flawless fit and finish of my outrageously extravagant Subaru Forester. Both cars even have front headlights. What a coincidence. Amazing how much better a good lens can make a car look... 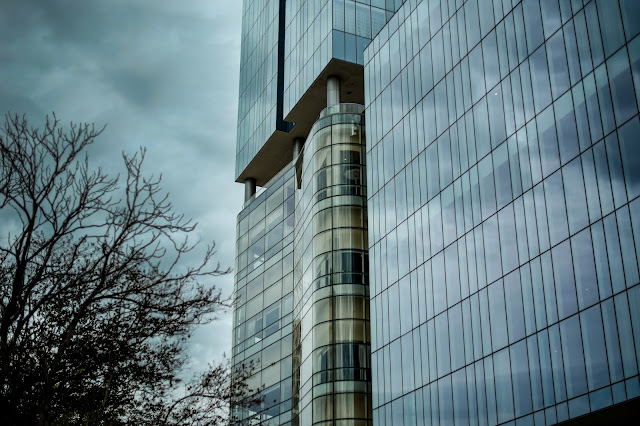 There were three models of the R series 50mm Summicron lens. The first was developed for the original Leicaflex and was also often paired with the Leicaflex SL and SL2 (both were film cameras that Leica made in the 1960's and 1970's. They were built to such a high level that they were only matched by hand made Alpa cameras of the day for precision and reliability). That didn't save them from extinction. But the R series lenses lived on. The second version was a completely different body design, a revised optical formula and came with one, two or three rear cams for use with the automatic Leica SLRs that we coming into the market after the SL2 was discontinued.
My copy is a 1993 version  that was made in Germany. A later version was also made at their facility in Canada. The final version got improved multi-coating and electronic contacts for communicating with their cameras. That version is easy to spot since is says, "ROM" on the front. The only real difference in performance between the second and third models comes in the way they resist flare. Mine is wonderful as long as you don't include bright light sources (like the sun or street lights) in or near the edge of the frame. The final version handles incident, glancing light better; but it's still not perfect.
While the R Summicron is a very good performer the newest APO Summicron SL (for the current digital cameras) is much better overall. But it's a trade off. The R lens is half the size and can be had, in good shape, for between $500 and $1,000, depending on its condition and which version it is. The SL lens has autofocus and is said to be the highest performing 50mm lens ever made available to consumers. Nobody goes that far with praise for the R version. 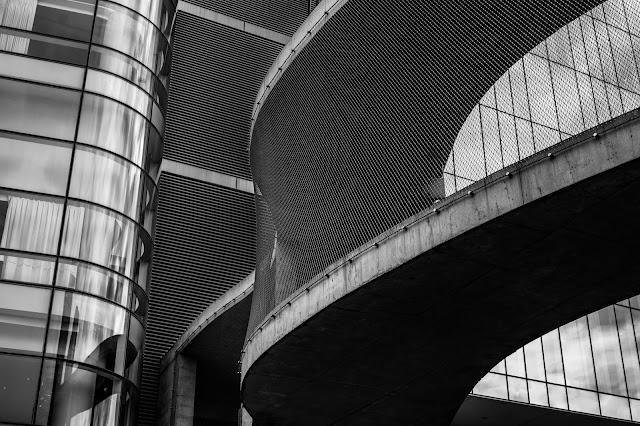 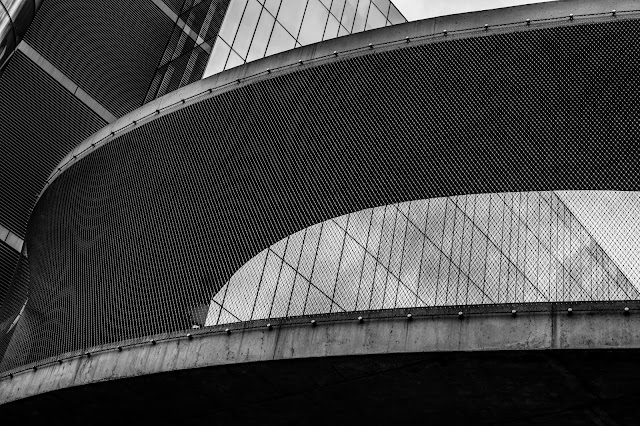 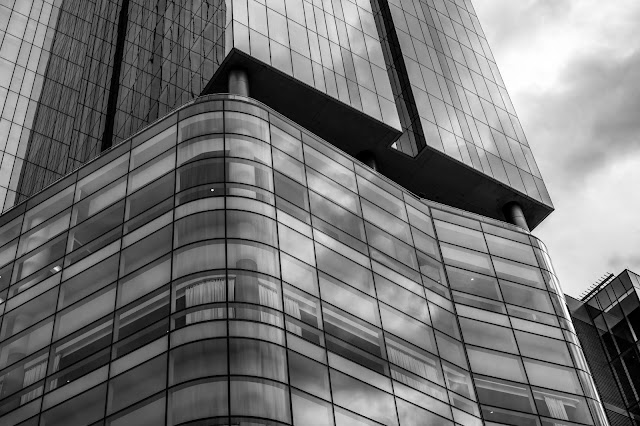 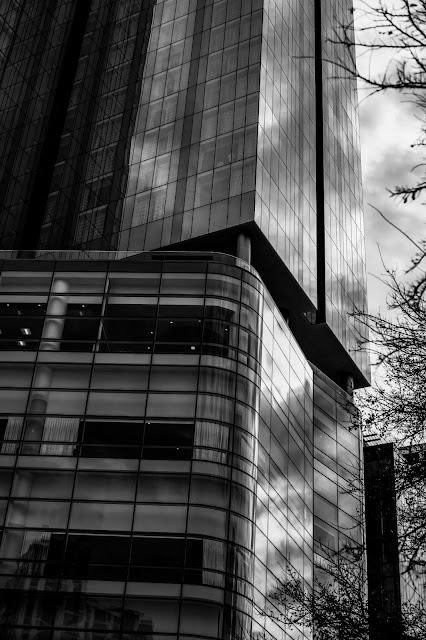 I've gotten proficient manually focusing with the Leica SL cameras. I use the camera's focus peaking most of the time but if I have the opportunity to slow down and really pay attention I also push on the joy stick on the back of the camera to take advantage of the instant frame magnification to check fine focus. If I do that I'm always rewarded with the sharpest frames I can imagine. Another advantage of using non-AF, non-IS lenses with the SL camera is that the battery then seems to last forever. That's a nice plus.
When I'm out shooting with a combination like this; manual lens and a camera set to M, I really channel how it felt to work back in the days of film. I shoot fewer frames. I take more time to focus and compose. The camera and lens hang comfortably off my left shoulder on a strap and I don't feel compelled to use them through every minute of my walk. 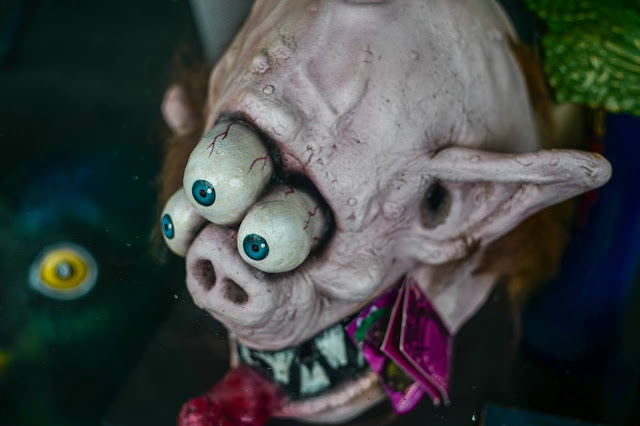 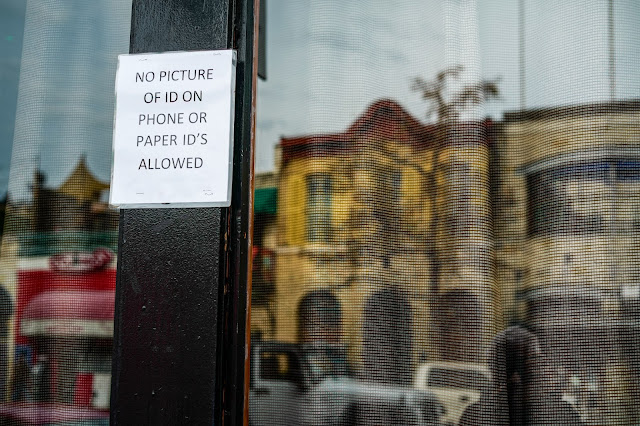 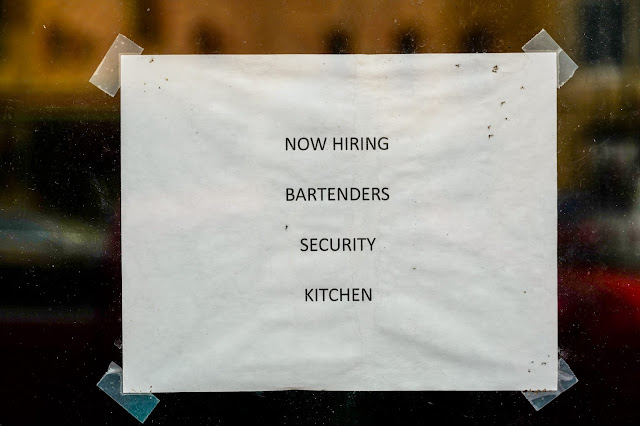 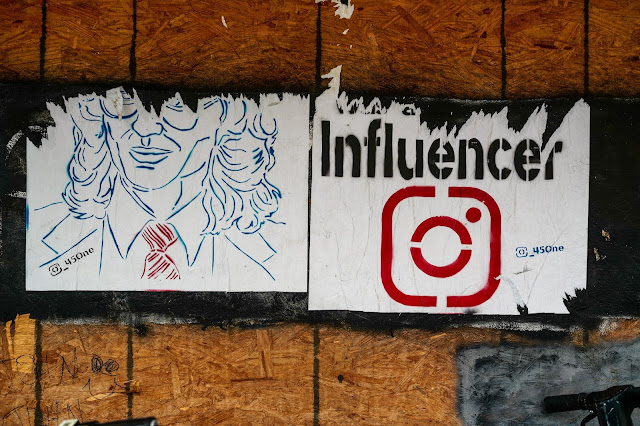 Files shot with this lens and camera combination, and output directly as Jpegs, seem denser or thicker than files I shoot with other lenses. I'm not sure why that is but I may have the desire, outside of conscious thought, to expose just a bit darker than I usually do since it makes the color saturation seem stronger but without making the files look "over-worked." 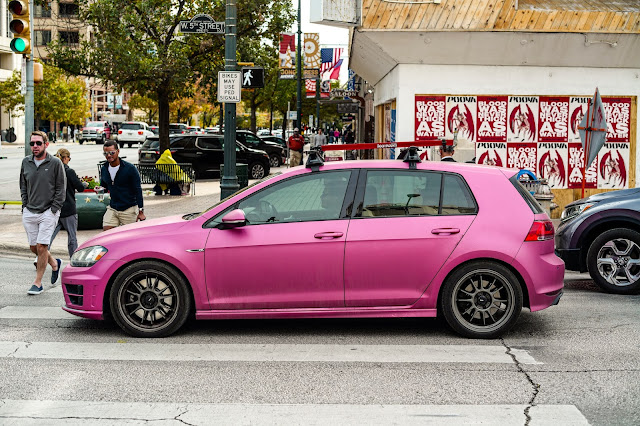 I am always very unhappy when automobile drivers come to a stop right in the middle of a crosswalk. I always photograph them. I have no idea what I would do with the photographs but I always take them. Sometimes I believe the act of photographing them shames the driver and makes them contemplate the dire evil they are inflicting on their fellow man. I am not shy either about pointing out their heinous folly when I walk past the front of their offending vehicle. Thinking of starting a foundation to deal with this pervasive problem but am told by friends with a better perspective that there are far more important issues to fix first... But still, it should be a crime to inconvenience pedestrians... 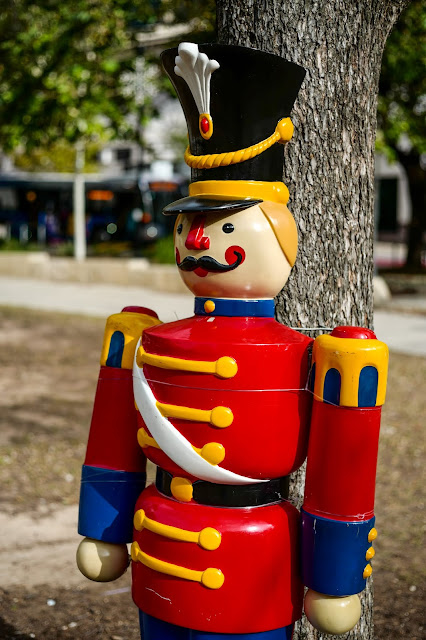 This frame of the toy soldier originated as a Jpeg and is presented to you as I saw it in the camera. I am impressed by the perfect rendition of the red and yellow colors. Reds are where most digital cameras fall down and struggle. The SL, set to AWB seems able to deliver accurate colors without breaking stride. A pox on those flawed reviewers who have written "fake news" accounts of Leica's Jpeg performances in the past. I find them pretty terrific; especially if you take time to set up the camera to your tastes. 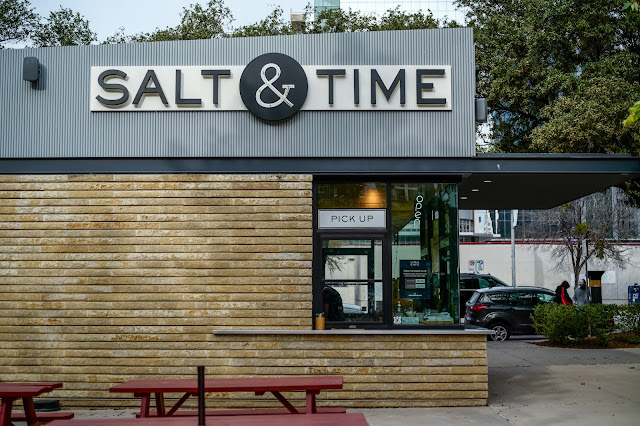 I swam hard and walked far today. And I skipped my regular Saturday family lunch because everyone had holiday errands they needed to run (yes! I've given both B. and B. my list of potential cameras and lenses which would warm my heart if I got them as Christmas presents. What does it mean if they laugh at me? Are those actually tears of joy?). Anyway, I started to run out of energy mid-afternoon so I stopped by this fun takeaway restaurant in Republic Square. That's a small park in the very center of downtown.
Salt and Time does a nice job with their salads and sandwiches. Today I tried a "grain bowl." There was a base of some healthy, crunchy, chewy grain covered with freshly diced purple onion, sliced cucumbers, a mix of various kinds of olives, a mound of feta cheese, grape tomatoes and freshly sliced avocado. The bowl was delicious and, if we took the cheese out of the mix, we could even please our more radical vegan acquaintances with one. But that's a rabbit hole down which I won't venture today.
I noticed that Salt and Time offers a charcuterie plate and wines by the glass. Maybe I should invite a bunch of Austin photographer to join me there some afternoon for a raucous happy hour where we can all tell tall tales to each other about our most bodacious photographic successes. Might actually be fun. At least I'm confident the charcuterie plates will be good. 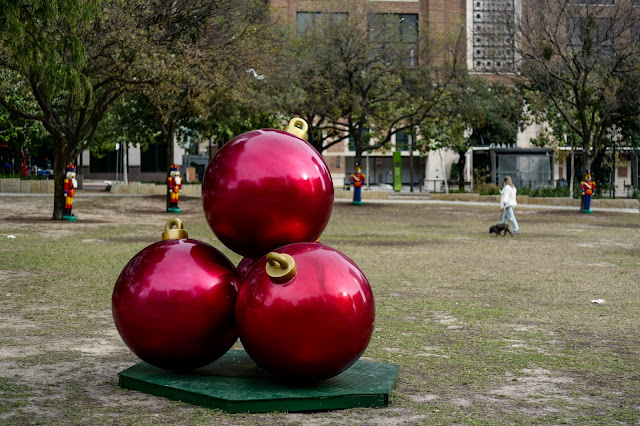 A typical "City of Austin" misguided attempt at Holiday decor becomes yet another target with which to test the optical prowess of the Leica 50mm R lens. 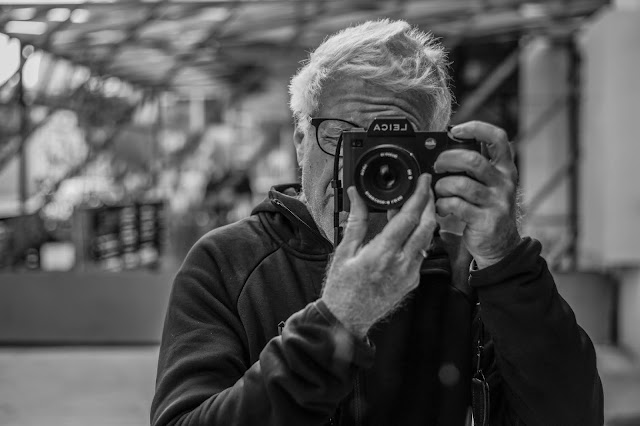 Here is the author/artist using the 50mm wide open at f2.0.
The bokeh seems awkward and insouciant... 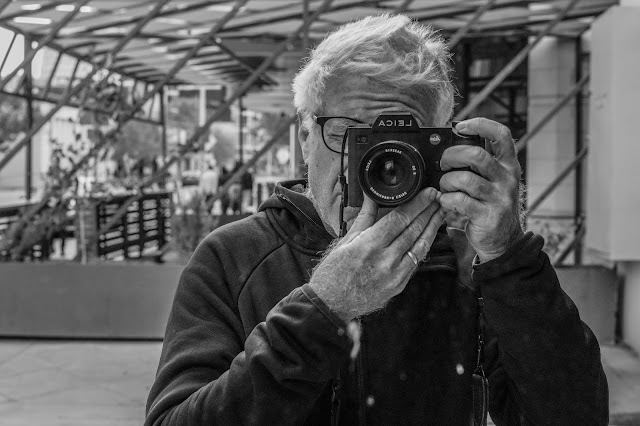 And here's the same scene but with the lens set to f8.0 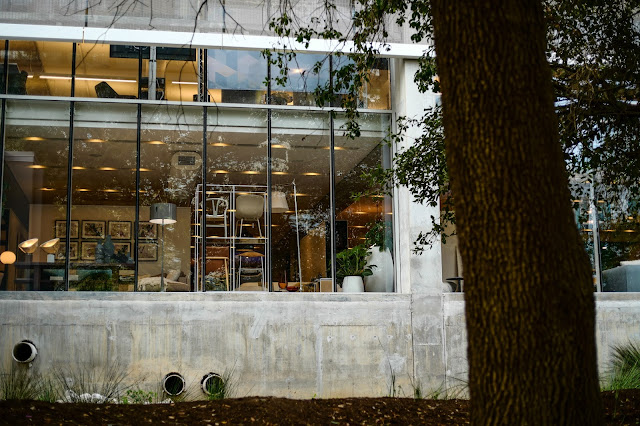 There's always got to be a last shot of the day but it doesn't have to make sense. As we say in masters swimming, "You're all adults. The workout is on the board. Modify it however you see fit. Just don't whine."
That pepper shot looked pretty darn good. Didn't it?
Posted by Kirk Tuck, Photographer/Writer at 19:00 7 comments: