We came. We saw. We photographed. 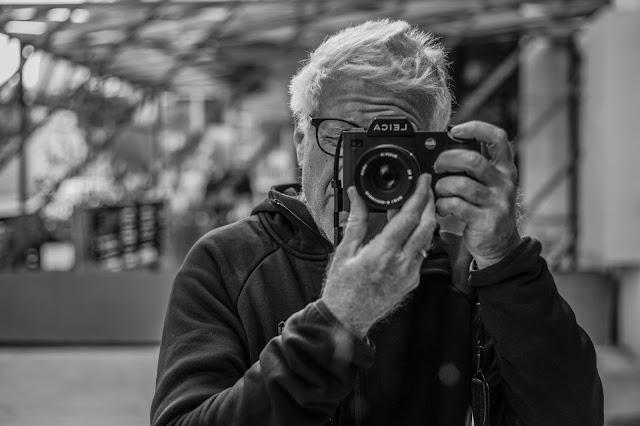 I've been working on a project for an ad agency since last Friday. Not continuously but on three different days. We've been photographing the agency's people as part of their new website content. We're doing all of the portraits with available light and we're using the Seaholm Power Plant center as a background.

I'm photographing each person in two or three different locations at the retail center, using all the metal work and structural beams as classic, industrial backgrounds. In each set up I'm shooting a series of wide shots and a series of tighter, head and shoulders shots. The agency will pick a similar pair for each person and the final use on the website will have a "rollover" effect where the page first shows the tighter shot and then, when a visitor mouses over the image it will dissolve into the larger, environmental photo. At least that's the plan as of today.

By the end of the schedule today I had photographed 23 people. It was a lot of fun. And I was interested and surprised to see that I knew so many of the people from their time at other companies and other agencies. It was almost like a series of mini-reunions.

When I started the project I intended to use the Leica SL2 and the 24-90mm Vario Elmarit zoom lens but I messed up, got in a hurry when packing, and ended up taking an older SL camera instead. It worked out well. The SL files looked great and since the project was to create content for the web the difference in resolution just didn't matter.

Yesterday I was better prepared. I actually took the SL2 with me but, just to shake things up, I used the Sigma 24-70mm Art lens instead of the heavier Leica zoom. All the images looked fine but when I really poked around the files at 100% or 200% I realized that I liked the higher contrast native rendering of the SL+Vario Elmarit a bit more. So, today I went back to the beginning and took that combination with me.

This shoot was an odd one for me. It was supposed to feel casual and off hand so I ditched the tripod and did all the portraits handheld. The creative director wanted the "authentic" look of available light so I also ditched the lights and light stands. It's as raw a shoot as I've done in recent memory.

One camera. One lens. One photographer. No accessories and no modifiers.

Of course it helped that all three days were blessed with nice cloud cover and we were able to dodge the rain. And we just slipped out of the morning fog when the first person to be photographed walked up to our central location.

I shoot too much. Too many frames. Which makes the post processing take longer. But it's okay. I like sitting in the cool and quiet office listening to my music stream and breathing nicely filtered air.

We were supposed to finish up the project today but one person called in under the weather and the CEO was AWOL so I'm sure we'll do a bit of a make up day soon. I'm writing this as Lightroom ingests the 792 files we shot today. I'll spiff them up, globally, and then upload them to the master gallery.

So far the creative director on the project is the only one privy to the images. I'll leave it up to him to either grant of deny access to the rest of the staff.

Everything I shot was done outside and it was refreshing to work outside all day long. Nice to feel the weather change and shift during the day and always great to watch the endless parade of dogs and their owners walking through on their way to the nearby dog park.

On this project I shot RAW files in both of the cameras and used the face detect AF. It all worked well. Both lenses are better than any zoom lens I've shot with before so that was nice too. If I had to change anything today I would have asked Mother Nature to cut back on the on again, off again wind gusts. It really created havoc for people with hair....