Continuing with my incredibly indulgent, recent habit of buying arcane and eccentric Leica cameras... I had my first outing with the mysterious Leica TL2 today. 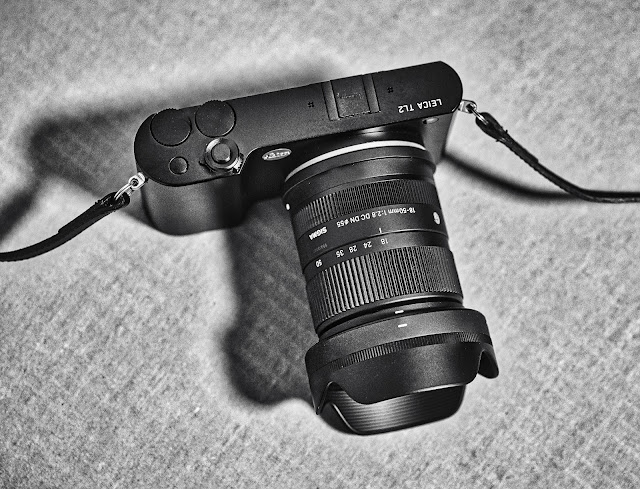 Leica TL2 + Sigma 18-50mm f2.8 DC DN lens.
It's rare for me to second guess myself where camera purchases are involved. I've owned some very eccentric cameras. Even the Pentax K-01. But this is one of the odder cameras to join the fold. And I'm hoping it grows on me over time. And I'm hoping that time frame isn't protracted.
The Leica TL2 is the third generation of this particular camera design and body style. It comes stock with only a rear screen for viewing, composing and menu access but you can spend an additional $600+ dollars to get a mid-res, add-on EVF. Not sure if my love extends that far just yet...
The body is carved out of a solid block of aluminum alloy, hand polished for 45 minutes, and then loaded with the electronic guts and a 24 megapixel, APS-C sized sensor. The only (ONLY) controls on the camera (excepting those found on the rear screen) are the two dials on the top and the one button just in front of them. That's it. So, if you are the kind of techno photographer who loves, loves, loves lots of external function buttons, and you can remember how you programmed all of the dozen or so on a day-to-day basis, immediately stop reading because this is definitely not the camera for you.
The TL2 and its ancestors were the first Leica cameras to use the L mount for lenses. When the first lenses were introduced Leica called them "TL" lenses and that's come to mean all the Leica L mount lenses that are designed especially for the cropped frame.
The screen on the back is just shy of four inches wide and, having used it today, I can say that it's usable in bright sun --- as long as the sun isn't shining directly on the screen. Since all the viewing is done on the big screen I expect that battery life will be...unimpressive. That being said, I walked around with the camera and shot for about an hour and a half and still had all but one bar still being indicated on the battery icon. That was a convoluted sentence. I should have said "the battery gauge hod only dropped one bar."
The menu is a big shift from the Leica menus on my SLs, my SL2 and my CL. Instead of lines of type you get a screen filled with little boxes that are labeled with the functions they relate to. In the "focus" box you can set whether you are using one focus area, multiple focus areas or face detection. Then you can select between S-AF, C-AF and MF. In the ISO box you can selection a specific ISO or Auto-ISO and you can customize the Auto-ISO parameters. Etc. Etc.
The menu is customizable in that you can enable specific boxes to appear in your "home" camera menu. You can also (somewhat) customize that one, solitary button on the top panel of the camera. The choices are limited and I decided it was most important to me to make that my exposure compensation button. I use that a lot...
Ostensibly, the camera will shoot 4K video but I'm pretty certain that very few people will opt to buy this camera to make videos. That would seem very, very counter-intuitive.
It's early times with me and this particular Leica model and I'm already finding some good things and some odd things about the operation. For instance, I had the camera set for multiple AF sensors, in S-AF mode, when I shot a photograph of the blue chair seat just below. One would assume that the camera could easily focus on the blue slats. I thought the camera was focusing on the blue slats. But when I got back to the office and looked at the image on my computer I could clearly see that the camera had decided to ignore the closer, and very obvious, chair seat and instead concentrate its focusing efforts on the gravel sitting below on the ground. An interesting choice.... 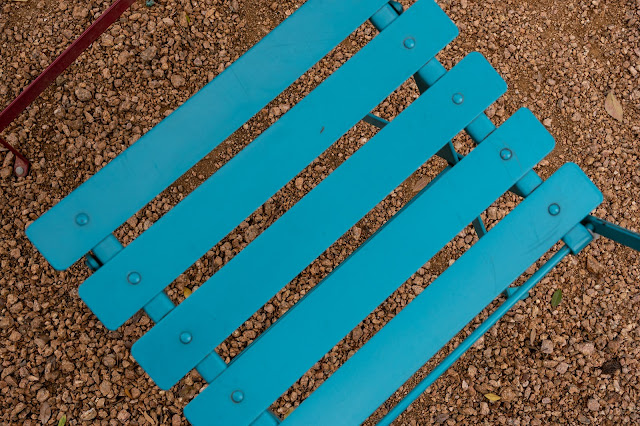 I was using the camera with the newest Sigma zoom lens for APS-C cameras; the 18-50mm f2.8 and I assumed that the files would be sharp and clear. I've had good experiences with the lens on my lovely little Leica CL. The TL2 did not disappoint. The files are crisp and the lens is well corrected in software. I think, perhaps, it's better corrected for vignetting with the TL2. Surprising since both cameras should have fairly identical imaging pipelines. My first impression of the raw files I shot is that the TL2, aimed more at entry level photographers, has been tweaked to be a bit contrastier, sharper and more saturated. I think Leica assumes that TL2 users will be more likely to use the files directly out of camera and so attempted to make them pleasing. With raw all things are possible. So I don't sweat the small differences between these two cameras.
In the Leica family of cameras I have found that the SL2 is softer and less contrasty than the older SL and I'm probably revealing myself to have pedestrian visual tastes but I actually prefer the look from the SL, and when I use both models together on a project I find myself sparking up the newer, more expensive camera's output to look more like the older one. 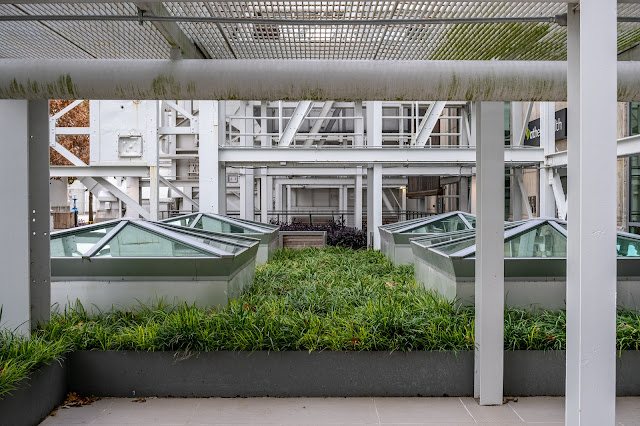 this is one of the areas in which I've been making portraits for my commercial project this week.
We're putting the subjects in the close foreground, shooting full frame at f4.0 and dropping the background out of focus. Today I just shot it for fun. 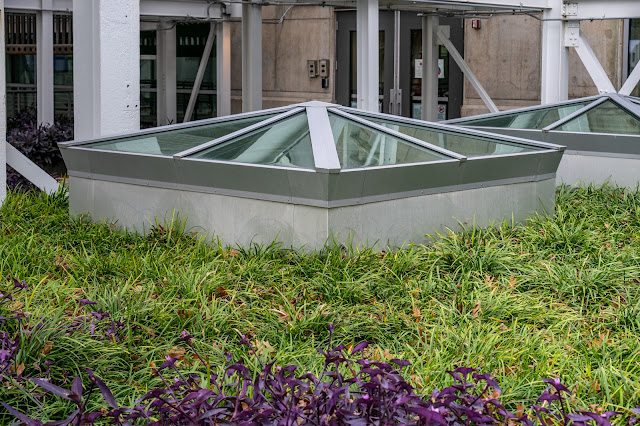 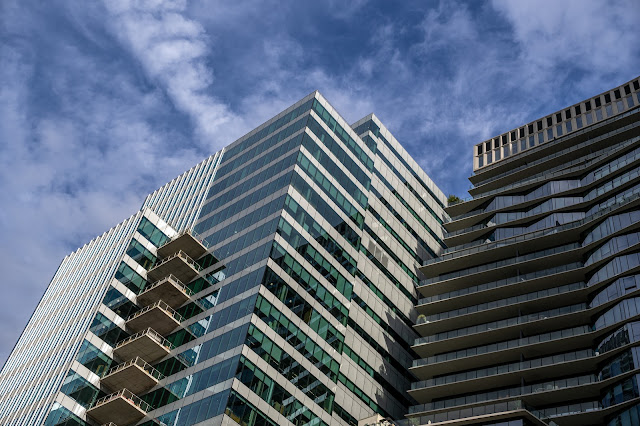 The screen on the camera looks a bit hotter than the final images but that's a quick tweak/fix to make when I have time to focus on it. I was impressed by the apparent sharpness of these building images and I also liked how the TL2 delivers dynamic range in raw files. I think the camera understands when it's shooting raw and it exposes to the right a bit. Not enough to blow out highlights but, when used in an automatic function, it gets as close as possible. I like that. 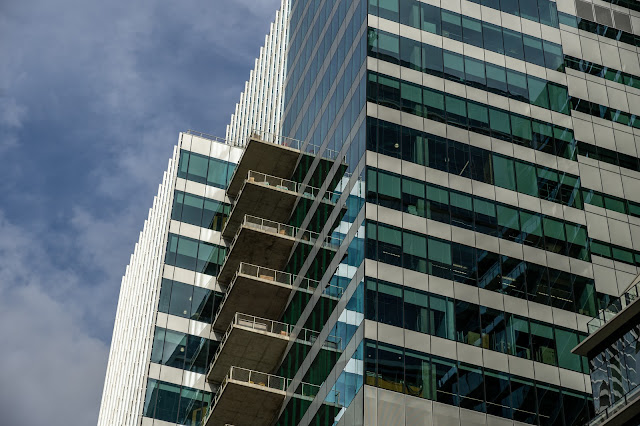 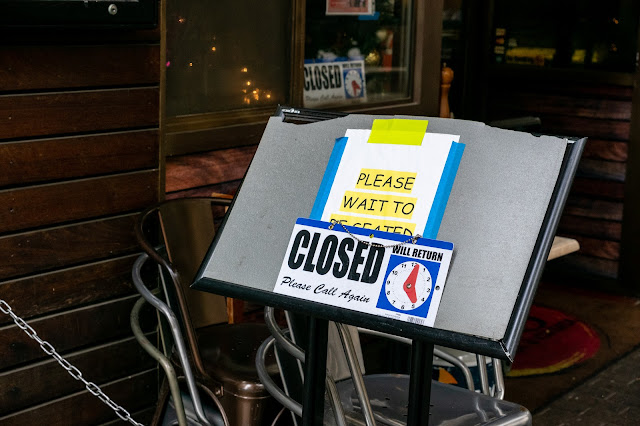 Based on my one day of walking around with the camera I'm certainly not going to suggest that you run out and buy one. It's definitely going to be an acquired taste. Even for someone who likes his cameras as eccentric and off the beaten path as one can get and still be on the level terrain.
This is a camera for someone who owns primary, all purpose, full frame cameras with which to do serious work. Someone who also owns a second collection of just as good cameras for which to do most other photographic tasks. I guess what I'm really saying is that this may be just a camera for someone who likes fun experiments in industrial design that can also be pressed into service to make great photographs without weighing one down while self-propelling.
If I was out to photograph a job it wouldn't be with this camera. Not yet. Not until I develop some bizarre style that can only be accomplished by this camera ... and that's a long shot. 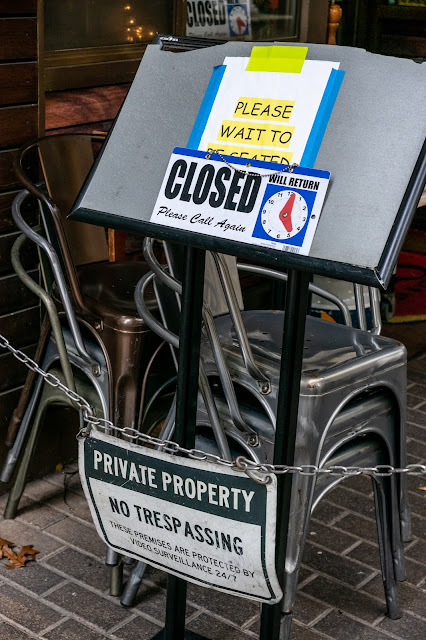 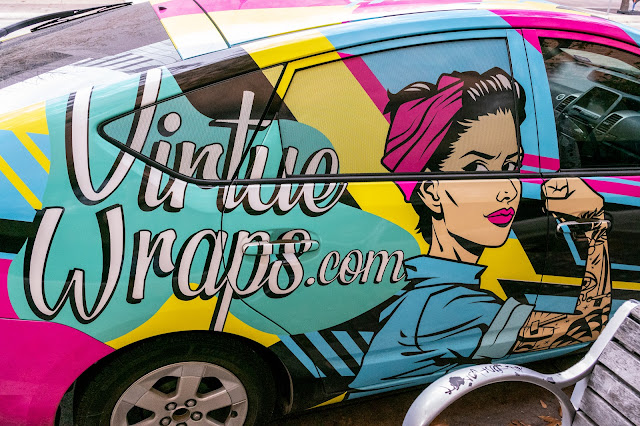 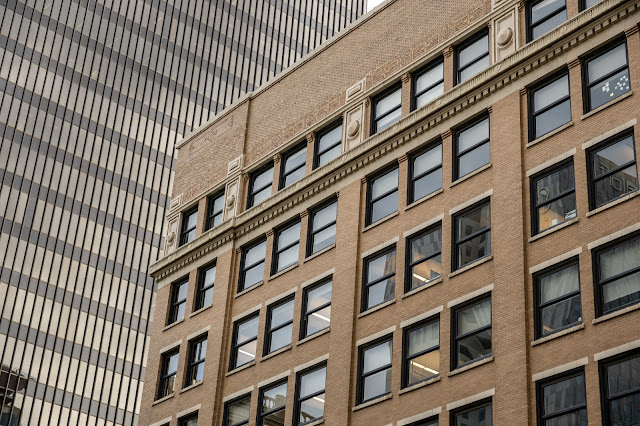 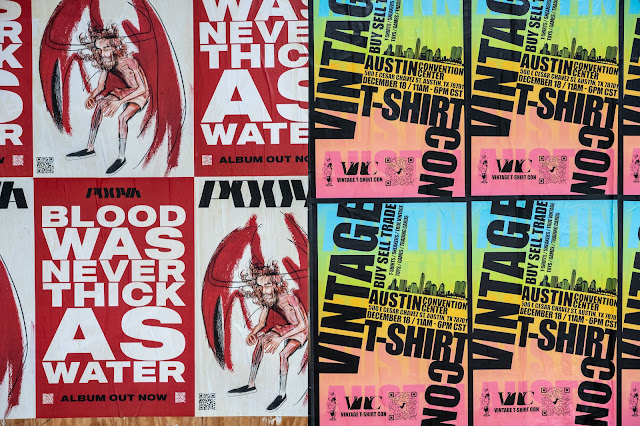 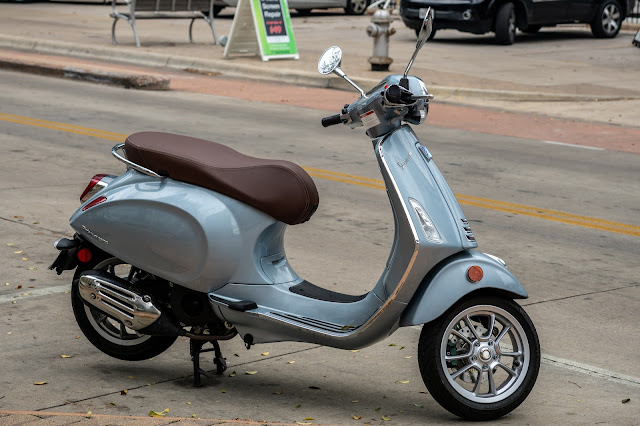 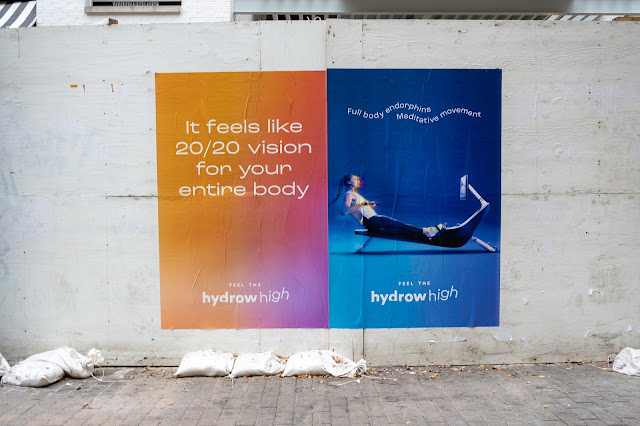 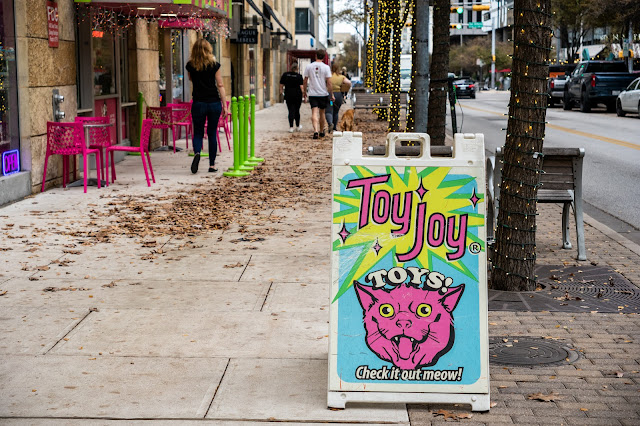 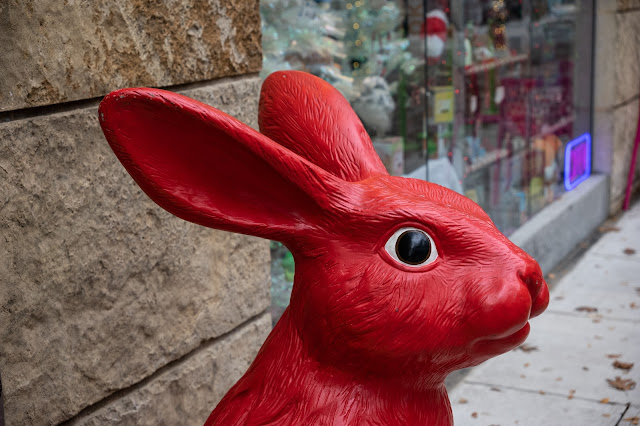 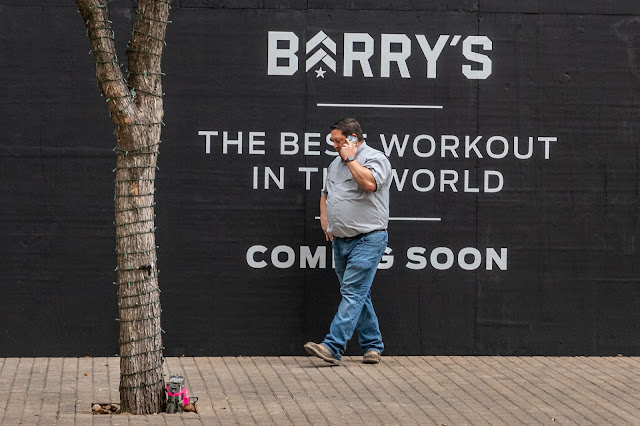 I included this shot not to make fun of a man who is clearly way, way overweight but because he is overweight and was standing in front of a sign touting "The best workout in the world." I thought it was ironic. But I also included it because I saw the scene from across a wide and busy street and only had time to catch one frame before he moved on. As a result I had to crop down the APS-C frame to one quarter of its original size to match the composition I wanted. The lens stands up pretty well to the cropping. 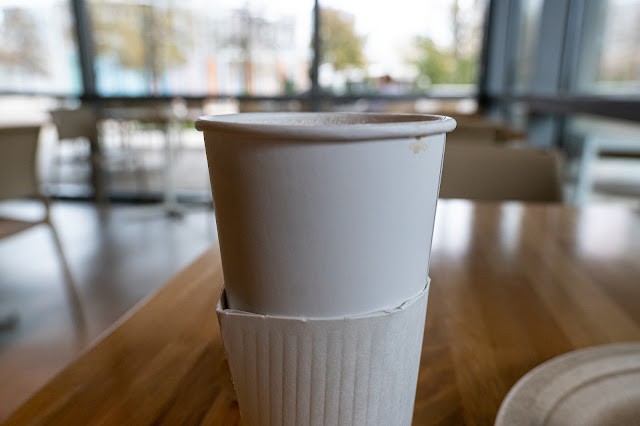 While working downtown over the last week I had occasion to get lunch at the café that's adjacent to the public library. While it might not sound like a gourmet feast I had an amazingly good veggie wrap yesterday. It contained fresh hummus, lots of chopped kale lightly spritzed with vinegar, chopped fresh carrots and onions, all contained in a spinach tortilla wrap. Healthy, filling and easy to manage.
I liked it so much that when I finished making a deposit at my downtown bank, yakking for a few minutes with my bank manager, and walking around snapping random photos with my new, ultra-eccentric camera today, I made point to stop back by the café for coffee and an afternoon dessert indulgence.
Perfect coffee and a pear frangipan tart, made fresh that day, in-house, that amazed and thrilled me. The atmosphere is great and there's plenty of well spaced indoor dining as well as ample outdoor space and tables. Here's the 411: http://www.cookbookatx.com
The café also has a full bar and a modest selection of wines and beers. Open from 10 am - 6 pm. If I was an afternoon drinker I'd grab a novel and head over for a glass of wine. Sadly, or happily, or non-judgementally, I am not.

Health notes: Studies in the news say that the aggregate blood pressure of adults in the USA is rising as a result of stressful times. I'm trying to do my part to keep the average down. I'm exercising twice a day. Not sitting too much (typed this standing at my file cabinet) and have cut down on rich foods. I've dropped about five pound and one, maybe two, belt notches this Fall and I've been taking daily BP readings.

I'm happy if I'm around 115 over 65 and I hit the floor and start a quiet meditation practice if I get much about 125 over 70 in any given day. Who really know if this is so important? But I've got the time and inclination to pay attention so I'm adding my data points.

In my mind exercise trumps diet, weight management is important and living with low stress is just as vital. Wasn't thinking about all that when I snagged the Leica TL2. Hope it doesn't raise my blood pressure.

Hey! It's the holidays. After you watch "A Christmas Carol" and you write checks to your favorite charities, and you do your good volunteer work, don't forget the all American tradition of looking out for number one. In that spirit I suggest you get yourself something fun and indulgent. You only live once.

for my UK and Euro readers...carry on.