Some Thoughts About My Project Yesterday. Two camera video documentation of a one perform play. 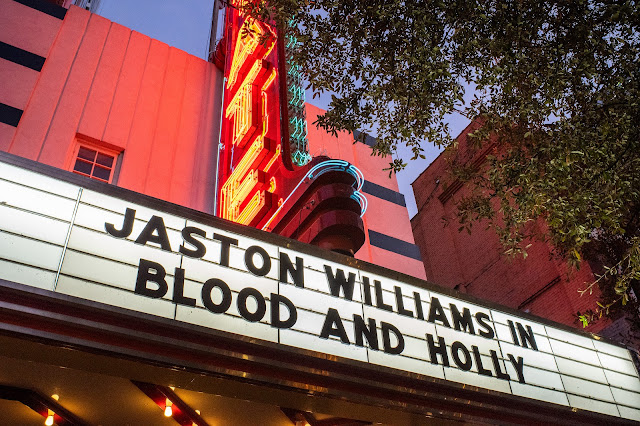 Jaston Williams (of "Greater Tuna" fame) was doing a one man play at the State Theater this weekend. There were only three performances; Friday evening, a Saturday matinee, and Saturday evening. Jaston had already performed in Dallas, Houston and San Antonio before coming to Austin for the last performances of the year. The name of the play is "Blood and Holly" and it's a bittersweet comedy about growing up celebrating Christmas in a small, conservative, Texas town.

Jaston is a unique writer and artist. He writes with a razor sharp wit but always manages to find humanistic side to his characters' cynicism. He is the consummate theatrical actor and his delivery of comedic lines is flawless. I've been documenting his work in one form or another for nearly 30 years now and it's always a bright spot on my calendar.

At the last moment this year Jaston and his agent realized that they'd forgotten to arrange for a video documentation of the play. They got in touch and I cleared the decks for them. We shot yesterday during a matinee performance at the ancient and comfortable State Theater on Congress Ave., just a few blocks from the state capitol.

I pared down my usual massive overload of video gear yesterday. Everything I ended up with fit in a big, red Husky tool bag and a small photo backpack. I always want to shoot live performances with at least two cameras so I can make sure I have constant footage in case one camera or the other needs a battery change during the show. Have a main camera to follow the actor and a second camera to get a wide view of the stage helps cover my butt if I jostle the main camera during a move, or lose the character somewhere on stage, temporarily. If he walks off and I need a second or two to regain focus...

I brought along a Panasonic S5 and a Leica SL2. I knew the S5 would have the longer battery life and had a more efficient range of .MOV codecs to choose from. The SL2 has beautiful looking files but in the format that I wanted to shoot the camera its All-I files would be nearly twice the size of the S5 files. I shot both cameras in .MOV formats and both were set to shoot @29.97 fps in 1080p. Both camera were able to shoot that format in 10 bit, 4:2:2 color. Both sets of files looked gorgeous.

The play started at 2pm so I got to the Theater at 12:30; about half an hour before the doors opened for the audience. The theater insisted/requested that I shoot from the very back of the house, next to the audio booth. Because of the long distance to the stage I used both cameras in APS-C mode so I could get a little tighter. The S5 was equipped with the Panasonic S-Pro 70-200mm f4.0 lens and the additional crop in camera gave me a long equivalent of 300mm --- and it stayed at the long end for the entire performance.

With the long end of the lens stretched out to its max I was able to comp Jaston from mid-cafe up for most  of the scenes. I always tried to keep some space open above his head because one never knows when someone might want to edit or trim in post production/editing.

It seems like it should be a simple thing to just follow an actor on the stage with a long lens on a fluid head, but it requires practice. I was so rusty yesterday. My stops and starts weren't as smooth at they used to be and if I needed to pan up or down a bit I always ended up overshooting. I kept muttering to myself, over and over again, "thank God for the B camera..."

After I got both cameras set up and ready to roll I had to work with the audio. Again....RUSTY. I hooked up a two line, XLR feed from the audio board through my usual BeachTek DXA converter and expected to hear good audio through my headphones from the camera. But I got NO audio through my headphones. I went through all the audio menu stuff three or four times. Nothing. I asked the engineer to increase the level on his output feed. Nothing. I use the interface because the signal from nearly all audio boards is "line out" and is usually a lot stronger than a microphone signal but apparently sound engineers have tired of newbie videographers whining about maxed out consumer camera microphone inputs and the output he was delivering was tailored for consumer camera inputs. I switched my converter box inputs from "line" to "mic" and started to get a good signal. I still needed to boost it a bit but that's never a problem.

For twenty minutes or so I thought I'd be scrambling to find an alternate pathway to good audio. By the start of the show my audio was where it should be and I spent the next hour and a half religiously wearing my headphones....just to make sure. I like my little Beachtek unit because I can use physical knobs to increase or decrease signal strength. It comes in very helpful when someone goes from soft voice to hysterical voice and you need to keep the meters out of the red.

The rough patch was the start of the play. No one in the house gave me any signal that we were at the top of show. The house lights suddenly went down, the audio went up, and Jaston walked onto stage already speaking. I hit "record" on both cameras and then frantically tried to follow Jaston coming out of blackness at full magnification. "Thank God for the B camera..."

I was using both cameras in their cine modes and I used the "face and body" detection AF, which is the same across both cameras. It worked really well on the tight camera because a scene becomes less complex when magnified. There are fewer objects to distract the auto focus. The AF worked really well on the "A" camera and required minimal oversight.

It was a bit tougher on the b camera side because there was a lit up Christmas tree on the stage and when Jaston would go into a pool of much lower light the camera would start to hunt for something else to focus on. It generally found the Christmas tree. Most of the time I just had to reach over and touch the area on which I wanted focus and the camera would recover. In those moments I found myself saying, "Thank God for the A camera..."

About ten minutes before the end of the show the battery indicator on the SL2 started blinking red. I made sure the "A" camera was right where it was supposed to be, and locked in, and then did a quick, full darkness exchange of the battery in the Leica. Now...that's a camera that's perfectly set up for a quick battery change. No battery chamber door to open. Just click a switch next to the bottom of the battery and it drops out about half a centimeter. You have to push on the battery again and it fully disengages. It's also very easy to feel how the new battery should be oriented for insertion. It's literally something you could do in full darkness. Just remember to keep a fresh battery in your pocket during the shoot. There's never time to go over to a case, open it, and search around for fresh electricity...

When the show was over and the house cleared out it was time to pack up and take all the stuff back home. The only painful part is carrying around two big, heavy tripods but all that weight comes in handy when you are shooting long and need to tilt or pan the cameras. I can't imagine getting a smooth move on a lesser tripod. It's just such a compromise.

A note to the non-believers: The 24-90mm f2.8- 4.0 Leica Vario-Elmarit is sharper than any zoom I've ever used, borrowed, rented or owned. It's sharper than most of my primes. It makes video sparkle. If I shot video all the time, instead of photographs, I'd use that lens and then I'd rob a bank and buy the 90-280mm Leica SL lens --- I've heard it's even better. Those lenses and two Leica SL2-S cameras and you'd be hard pressed to do better.

After the shoot I headed home to grab a late, late lunch and to drop off the full load of gear. And then, what does a happy and committed photographer do after a full afternoon of videography?

Why, one grabs another favorite camera and lens and heads back out to take some more photos. It's the same response I have when people ask me what I might do if I actually did retire. I tell them that when I stopped taking photographs for work I'd just take more photographs.

I had an excuse. I wanted to go back downtown to photograph the marquee at the theater so I could use it as the header for this blog post. I also wanted to spend more time with the Leica CL and the TTArtisan 21mm f1.4 lens. That's what I used to shoot all of these images. Please keep in mind that neither the camera nor the lens "features" image stabilization. These images are all post too much coffee.

At least that's my excuse. 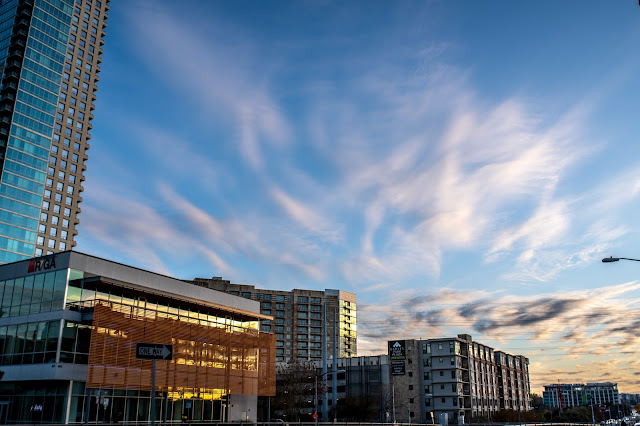 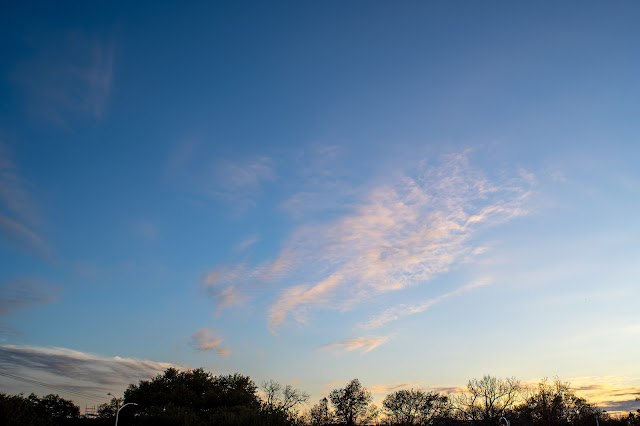 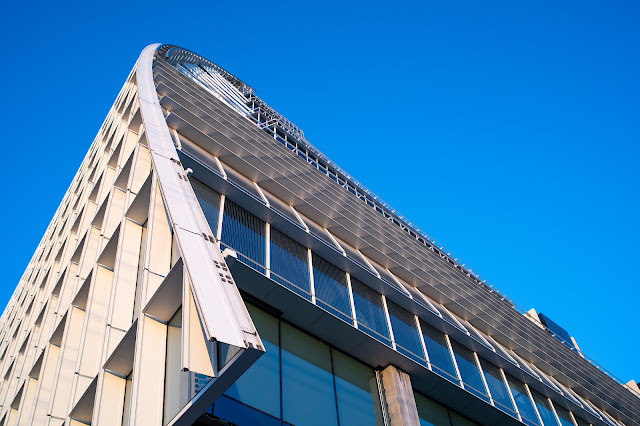 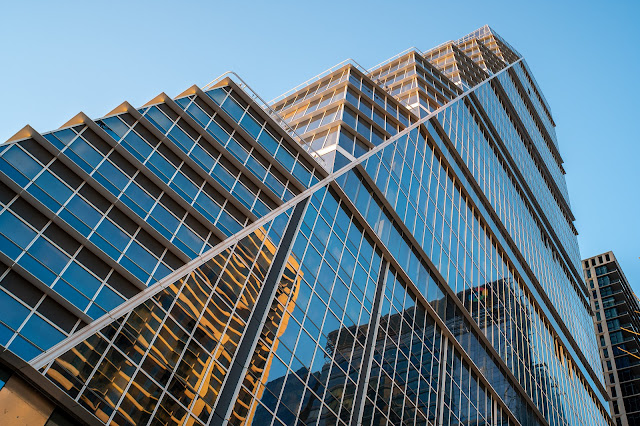 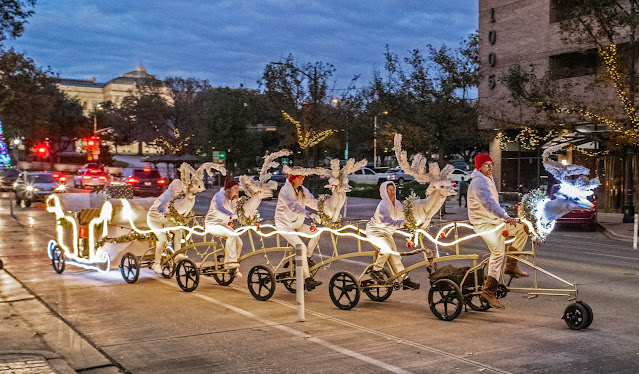 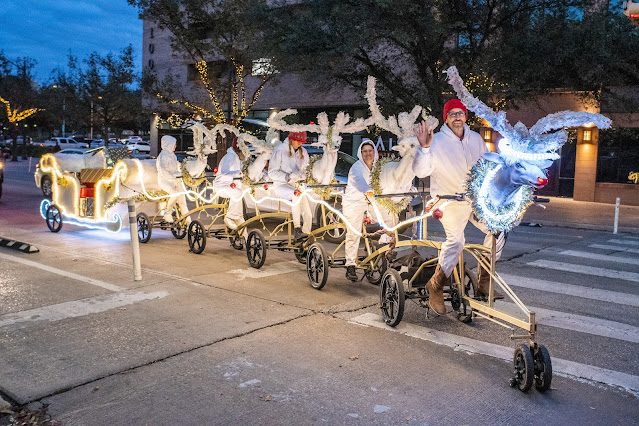 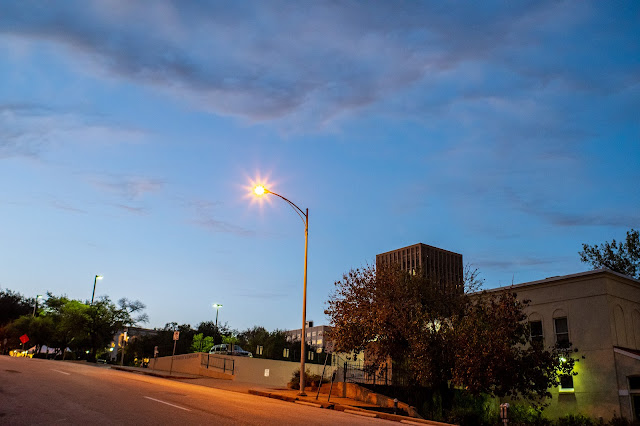 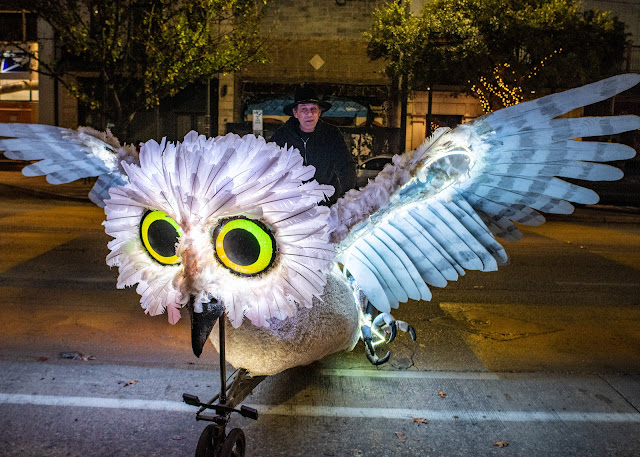 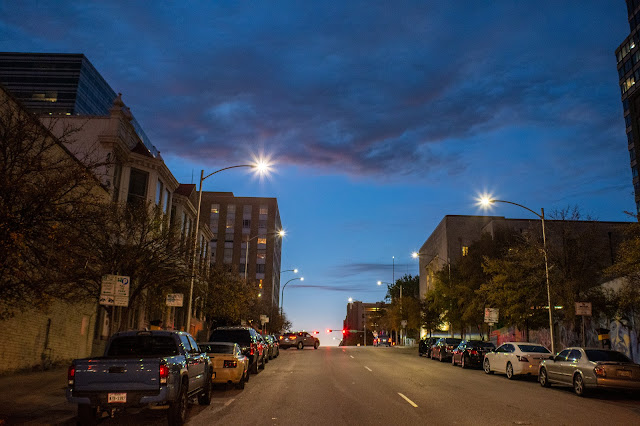 "Medium Format" digital cameras seem to be all the rage these days. Maybe I should try one.... 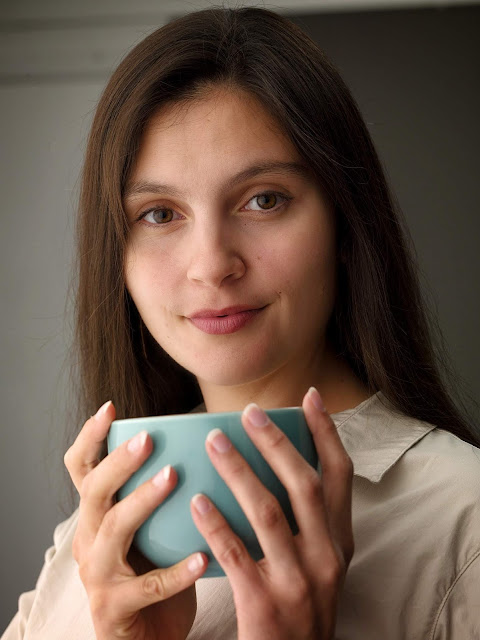 But wait! I already did that. The image of Amy, above, was done on a Phase One 45+ camera way, way back in 2008. The sensor was a CCD type instead of the current CMOS models but some picky photographers still think that CCDs were more visually interesting, richer. They certainly did hold onto highlights and didn't got all band-y in the shadows either.

That year I worked with three different medium format cameras, all with bigger sensors than the current line ups of "Pixie" medium format cameras. It was an interesting time; to be working during a huge recession with cameras that cost forty or fifty thousand dollars. But they were all loaners from camera makers. I could never justify the cost. Or maybe I just didn't try hard enough. But it's getting a bit annoying these days with everyone around me so breathless about medium format now. As though it was just invented. As if it had just arrived.

The really good stuff has been around for quite a while. It just took time for prices to drop and everyone else to catch up.

In this example I think a lot of the credit should go to the amazing, medium format zoom lens I was using with the camera. It was a Schneider zoom and it cost somewhere in the realm of $11,000. And that was in 2008 when $11,000 was actually worth something. Wish I still had the lens... 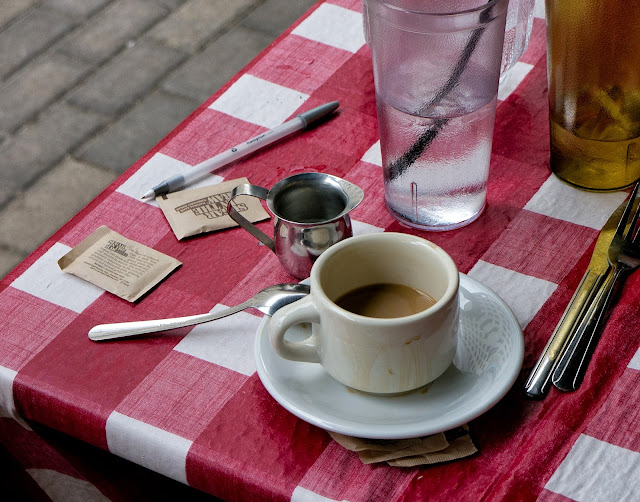 A still life I came up while walking in downtown. Not sure but I think this was taken at Pecan Street Café.

Too much sugar for my taste.