The Leica CL camera, paired with the Sigma 45mm f2.8 Contemporary Lens Is a Great Combination for Casual Photography. 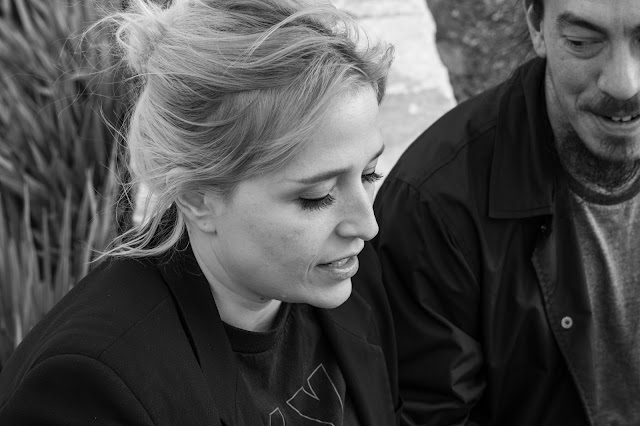 this is Charlotte. That's Minh. They're exploring downtown with cameras.
We stopped to chat and I found them to be fun and quite knowledgeable about
photography. Minh's work reminds me of the black and whites of Alan Schaller.
I'm really loving working within the L Mount Alliance of camera gear. Two weekends ago I was videotaping a live performance with a Panasonic S5 and a Leica SL2 along with a Panasonic lens and a Leica lens. Last week I was making portraits for an ad agency with a mix of Leica cameras and Sigma and Leica lenses. Yesterday I was having a blast shooting a funny Lithuanian women and then food with the big Leica and a fast Sigma 35mm. Today I winnowed down a bit and put the small and beautifully made Sigma 45mm lens on the Leica CL and went out photographing in downtown with that combo. My rationale for being downtown? Sunny weather and the need to deposit a few checks into my bank. The downtown branch just happens to be my favorite....
I mostly photographed old and new buildings in downtown which is totally counter-intuitive with a lens that's a 67.5 mm equivalent (in full frame language). It's too long for wide vistas, too short for far details. But it did a nice job rendering the soaring buildings and old brick work buildings with high sharpness and resolution. And the camera, used to make .DNGs, was able to dig into the shadows without banding or much increase in noise.
The total package is small, light and unobtrusive. And at this point the operation of the camera is becoming second nature to me. It's much more like using a Leica SL than it is like using a TL2. I spent an hour and a half walking around with the camera turned on and I came home with a nearly full battery. I guess I really didn't need to stick two extra batteries in my pocket. I wish though that I'd stuck the TTArtisans 17mm f1.4 lens in a convenient pocket. I seem to be seeing more and more potential images that are just begging for a wide angle treatment. I am getting spoiled by auto focus with the CL and TL2 so I should probably look into the Sigma 16mm lens for APS-C. Every review I've read positively gushes about that lens. But I guess I could also just pop a 20 or 21mm on an SL or SL2 body and be done with it. 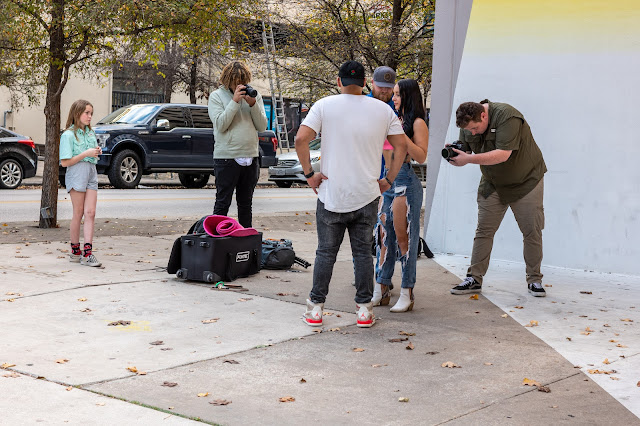 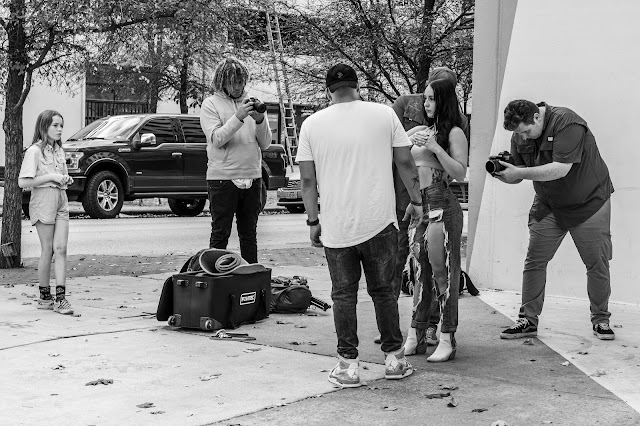 I guess what I really like about the L Mount Alliance is that I can pick and choose between camera bodies, camera types and the lenses from three different, very good, manufacturers as well as a larger selection of eccentric but very decent primes from the likes of Voigtlander, TTArtisans and others. It's interesting to know that, should you want to just experiment with a specific focal length, you can buy a $100 lens and use it to gauge your interest. If the focal length and look really speaks to you then you have an open range of options priced anywhere from $100 to $5,000. You are only limited by your own perceived need for unflinching performance.
In the case of wide angles I'm more than happy playing around with all manner of "under $300" lenses. But at the same time I feel the gravitational pull of stuff like the Summicron 75mm f2.0 Apo lens from Leica. Can't quite convince myself that $5100 would be happier if it was converted into a lens or more comfortable just left snuggly in an index fund. Right now I'm still of the second belief but it's a short and treacherous trip to the edge of the cliff....
But the real reason for playing with the cheaper end of the product world is that clients are few and far between in the rocky world of professional photography right now. Mostly because of the surges in the pandemic, and it just doesn't make much sense to buy stuff for outrageous prices if one can't at least rationalize said purchases with a straight face. The 45mm Sigma falls into the luxe camp. When used correctly it's premium. That's why I have two.... But acquired at prices that bridge the two camps. 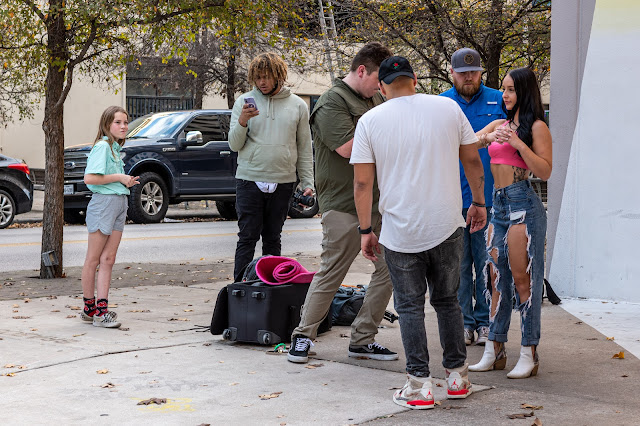 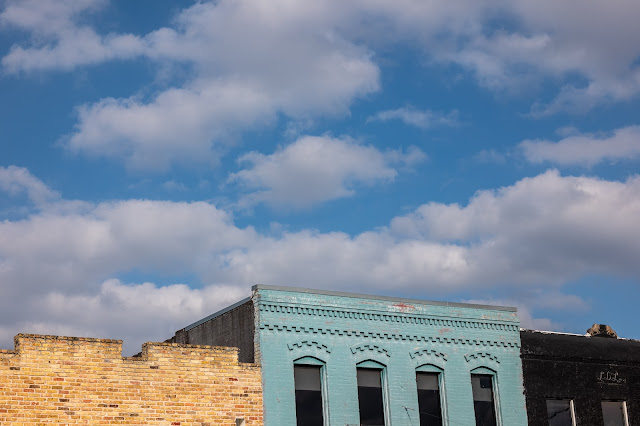 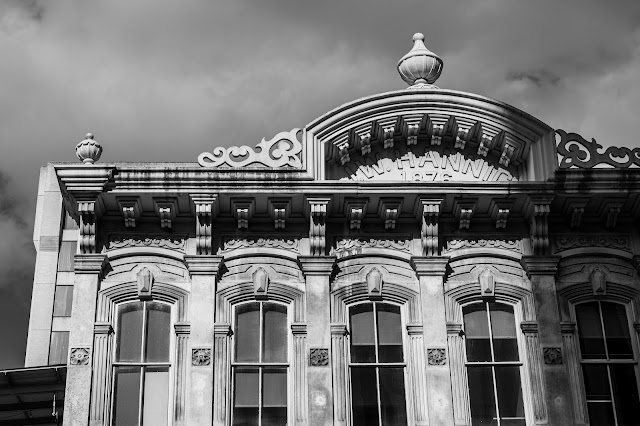 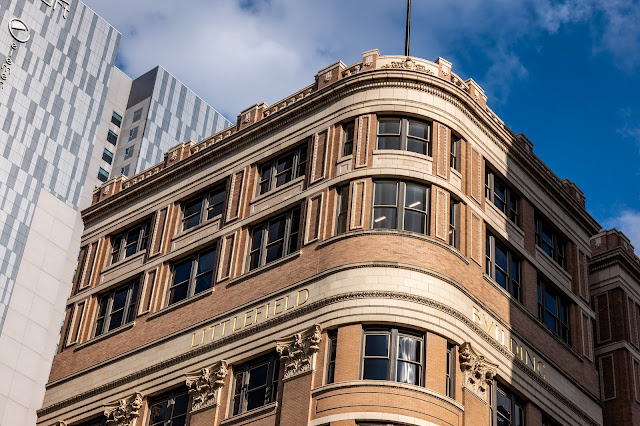 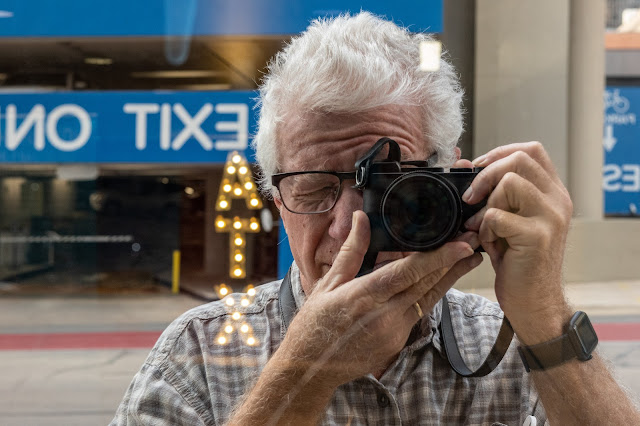 See? It's a small and lightweight package.
Even I can handle it okay. 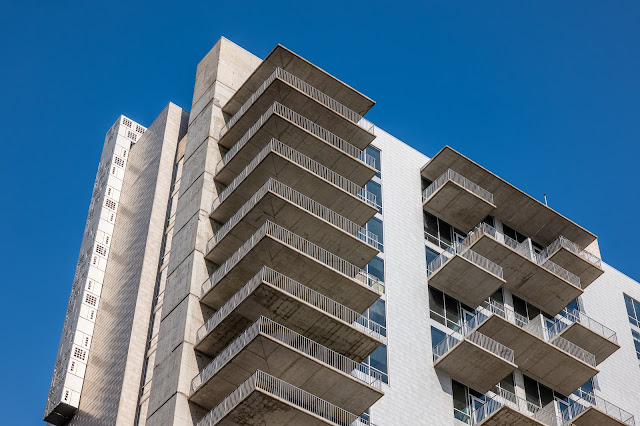 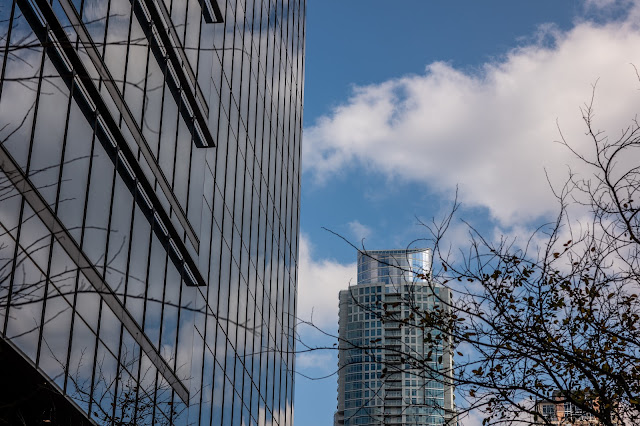 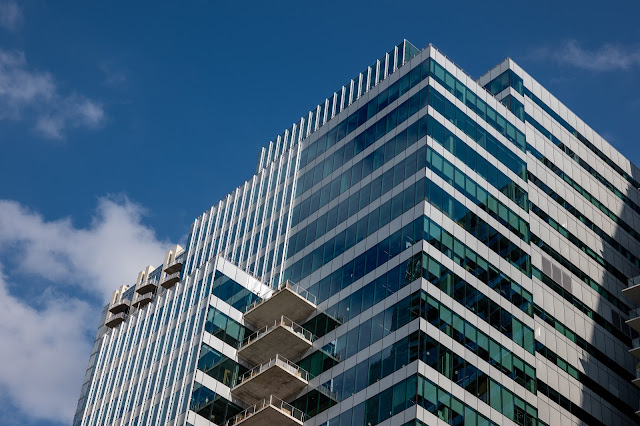 Late Afternoon Repast. The day after Christmas and 68°. Perfect for outside dining (and photos). 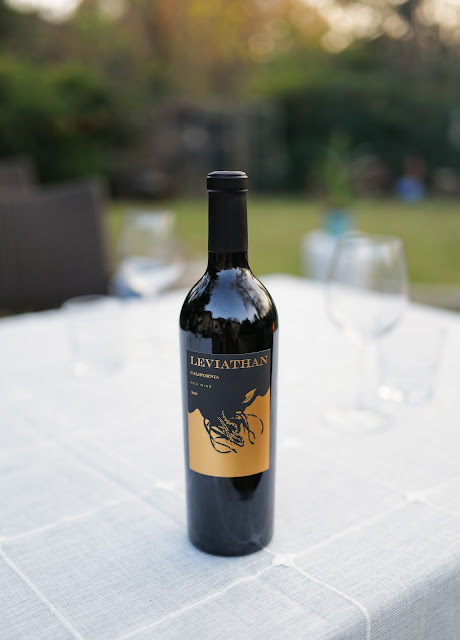 Must be something in the air. I got two bottles of one of my favorite red wines as gifts this year.
We were invited to our friends' house for dinner. In what has become a tradition we ate and socialized outside. Our hosts made two sets of appetizers so we could have food within easy reach while still giving us some distance. There was a fire in the pit near the table. I thought it was unneeded when we first arrived but as the evening flowed the temperatures dropped into the lower 60s and the fire was quite welcome.
I nearly always bring a camera with me to dinner and I like to play around with quick compositions and causal documentation. Sometimes I send along photos in an e-mail as a "thank you."
I played around yesterday with the same combination of camera and lens I used on my walk just before. It was the Leica SL2 and the Sigma 35mm Art lens. So much fun to shoot at wide apertures and still get sharp detail where the focus hits. 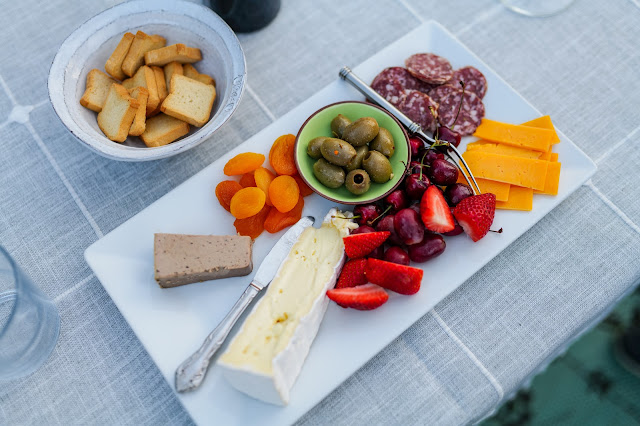 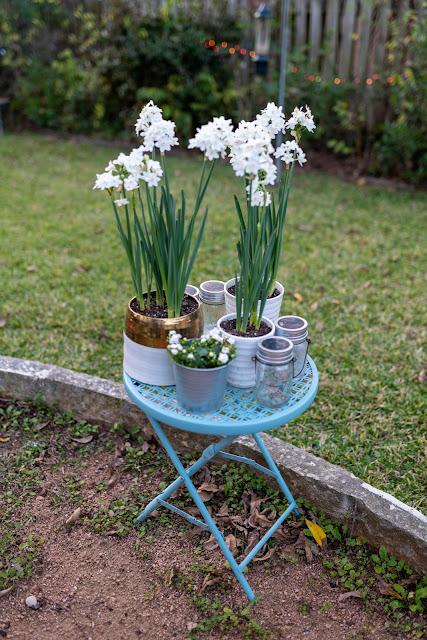 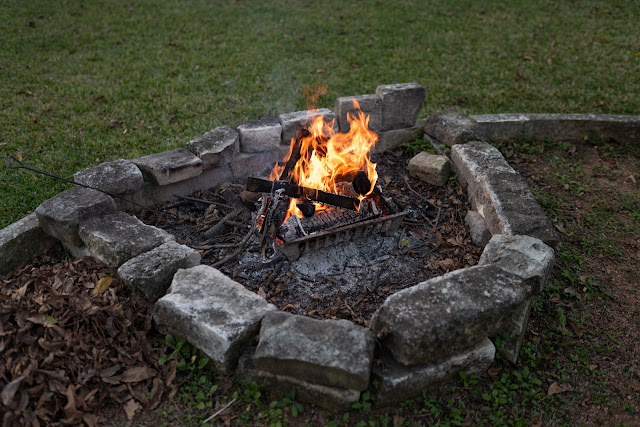 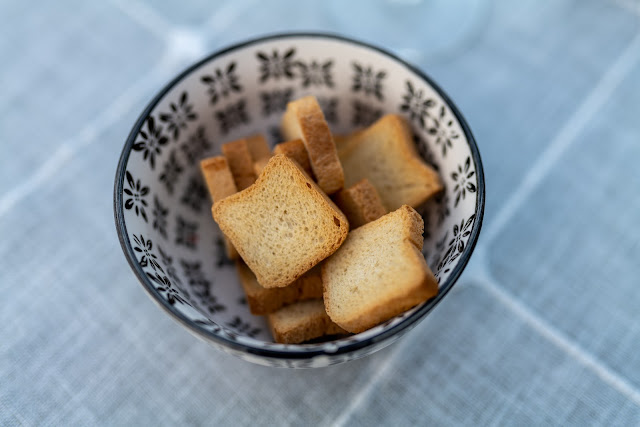 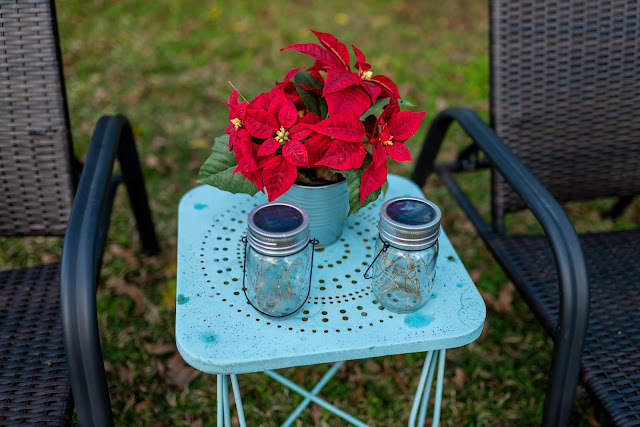 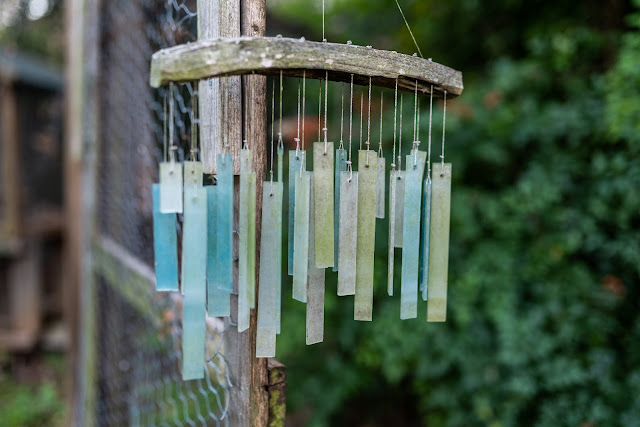 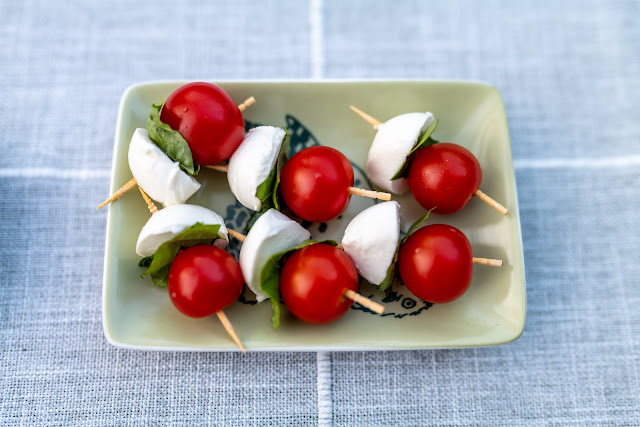 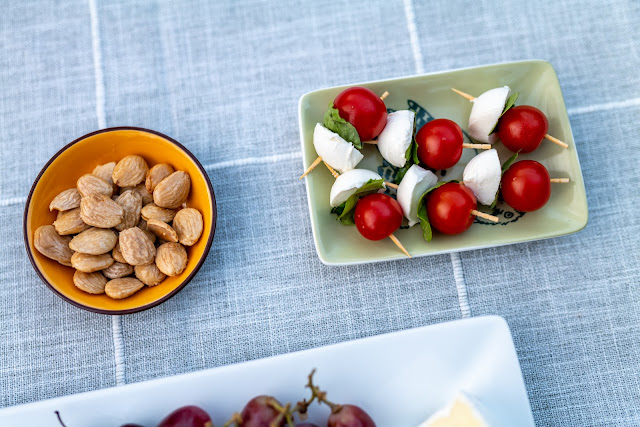 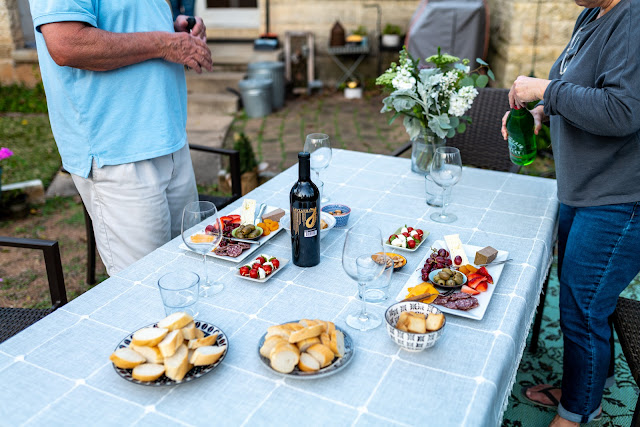 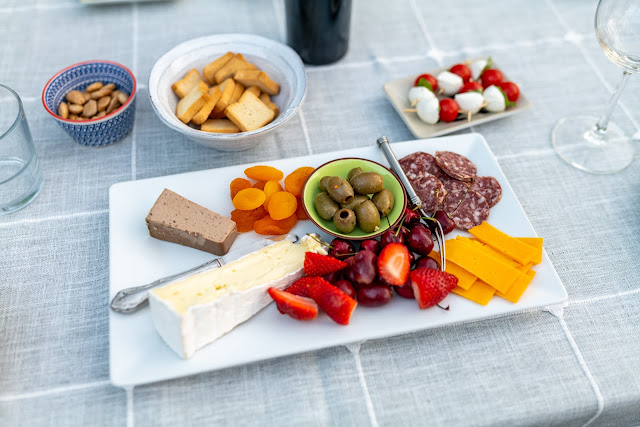 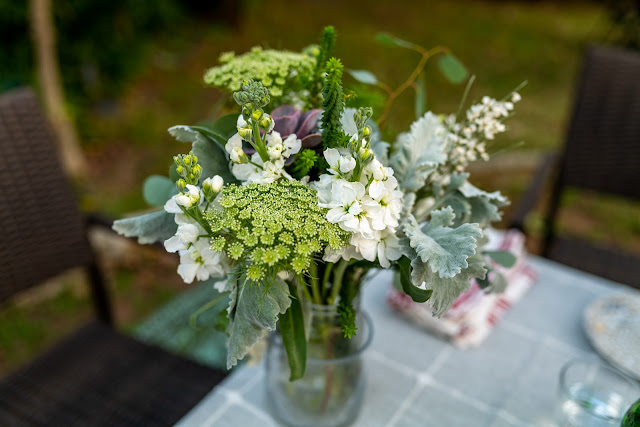 Such a relaxing way to spend part of the holidays.
Posted by Kirk Tuck, Photographer/Writer at 12:01 2 comments: 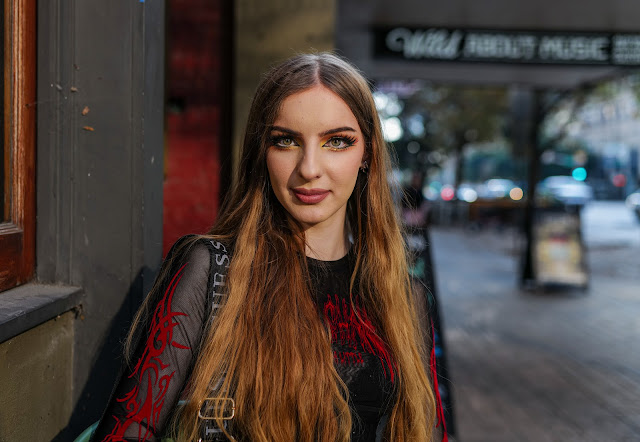 It was the day after Christmas. I was antsy. And I had read too much about lenses and photo stuff. We had a dinner date with old friends scheduled for later in the day (outside, distanced, all triple-vaxxxed) and I just felt the need to get out in the warm afternoon and stretch my legs. Since most of my reading was about companies designing lenses with greater resolution for denser sensors (nice rhyme ..) I reached for the Leica SL2 and the Sigma 35mm f1.4 Art lens. I hadn't used that lens in a while and wanted to walk around taking photographs at the optimum aperture of f4.0 to see just how much of a quality difference between the 35mm and other lenses I could see.
I walked through one of my favorite routes and when I hit Congress Ave. I stopped at "The Hideout" theater and coffee bar to grab a cup of the magic elixir of the gods (enjoyed black) and to take a few quiet moments to reflect about nothing in particular. The coffee was good and the weather complicit.
While I was sitting, sipping and staring off into the distance I noticed a young woman hovering nearby, talking to her phone, which was suspended at the end of a selfie stick. She smiled pleasantly and asked if she could join me for a moment. Sure. Why not?
She asked about my camera and I asked what she was up to. She had an accent. I asked where she was from. She told me "Lithuania" and asked if I knew where that was. I told her that I did and that I had traveled in that area on business a long time ago. Then the conversation turned to marketing, how to stay fresh in a career that centered around producing social media content, how do stay engaged. I told her what little I know and then asked if I could take her photo. After, we exchanged Instagram handles and I bid her goodbye. I needed to get home in time to dress for dinner.
There are several things about the image (above) that I wanted to point out. First is that this was done with the Leica's Jpeg engine; it's not a raw file. Reviewers seem to enjoy trashing Leica's color and saturation rendering when used in Jpeg mode but I think the un-retouched image refutes their claims. It's a nice file but a touch too warm. That's on me.
Next, I wanted to show off how sharp and snappy the lens it even though I am using it here at f2.0. The Sigma Art series certainly seems to have been designed to be useful and good or excellent even at or near its widest apertures. A bonus of being able to use the lens near its widest apertures is also on display in the form of a nicely out of focus background to the right of my subject.
By the time I left I was running behind schedule so I walked quickly in the direction of my car. As I was crossing the "Butterfly" bridge, near the library, someone called out to me. "Excuse me sir...." I didn't understand the person at first but as he and his companion got closer he repeated his question. It was, "Is that an SL or an SL2?" The person asking the question was a photographer from Nuremberg, Germany and he was accompanied by a lovely American woman. We chatted about cameras for a few minutes (he was a Q2 users) and then they asked if I could give them some direction to good location at which to photograph in downtown.
I think, sadly, that they picked just the right person because it's a subject I certainly enjoy. By the time I got back home I was more than a few minutes late. But it was such pleasant afternoon with a camera, and B is nothing if not patient with me. 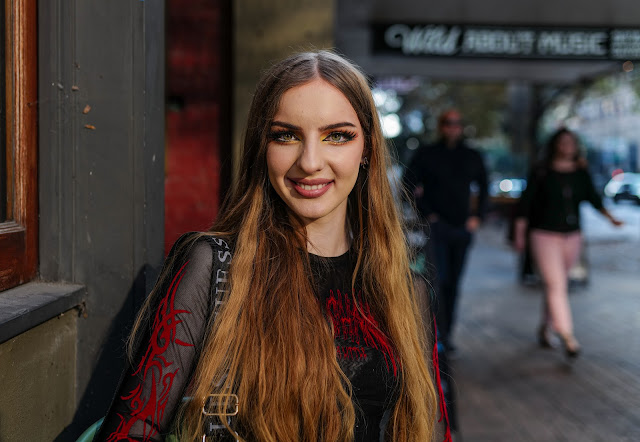 It doesn't seem so hard to me to meet strangers on the street and to photograph them. Right? 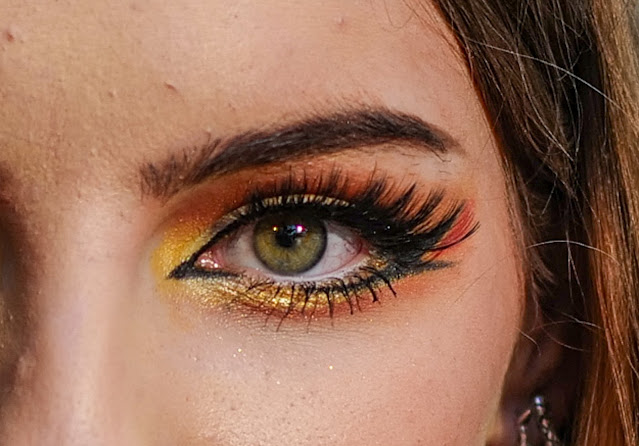 I think the camera did a passing/good job at nailing focus.
600%?
Posted by Kirk Tuck, Photographer/Writer at 11:36 3 comments: