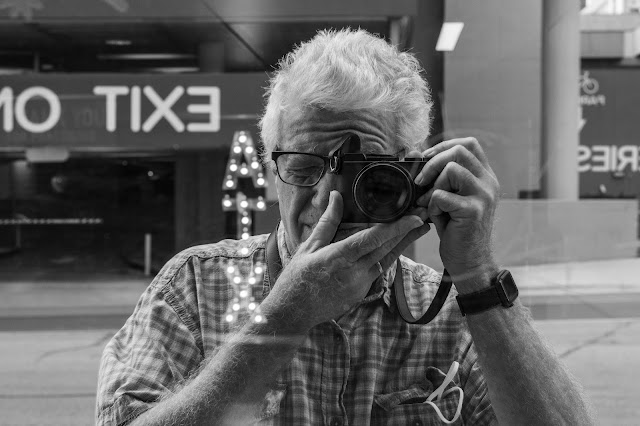 I discovered yesterday that when I'm using a smaller and lighter camera I don't let it hang over my left shoulder on a strap when it's not in use. Instead I do the "ultimate tourist" carry instead. I use the least over-engineered strap I can and I hang the camera around my neck and let it ride on my chest, or mid-torso. When I get ready to shoot I bring it up to my eye from chest position and it's a clean sweep.

Once I have the camera in front of my face I use my right hand more or less underneath the body of the camera to support it while using my thumb to stabilize the camera and to push it into my left hand. It's a hold I've practiced for years and I find that I'm able to hold the camera quite still that way.

Sometimes, when I'm out photographing, you'll notice that I shoot my own reflection in mirrored glass or in a convex mirror at the exit of a parking garage. Partly I like to see how I'm presenting myself to the world that day but mostly I'm anxious to later analyze my camera hold technique to see if there are things I could do to improve my stability or even my own comfort with the camera. For example, in the image above I can see that my arms are positioned out in front of my body; my elbows are extended out and my forearms are angled back in order to bring the camera to my face. In theory I could get a more stable hold if I brought my arms back toward my body more. Shooting with bad technique is unconscious while fixing bad technique must be done consciously. And reinforced through repetition. Posture in entropy continues to devolve unless you practice better form with awareness.

It's probably silly to dwell on because I'm not sure it makes enough of a difference to influence either the way you shoot or the way you approach your subject matter but there it is.

As swimmers get older they can no longer depend on brute strength to maintain their speed. Instead they have to renew their concentration on technique. Everything from hand placement to ankle flexibility while kicking contributes or detracts from speed and efficiency. Sometimes a coach can explain something but the swimmer doesn't get it. If that's the case the coach might resort to making a quick video of the swimmer's stroke mechanics and show it to them. Actually seeing the mistakes one is making goes a long way toward making things right. Getting the techniques locked down.

I think it's the same with photographers. And I think each camera, with it's weight distribution and overall volume, requires some modification of the basic handhold to make the camera feel more transparent and more aligned with the photographer. That's my assumption. But again, I'm not sure it really does much to improve the quality of images --- it's more a method of getting maximally comfortable with actually operating the camera. 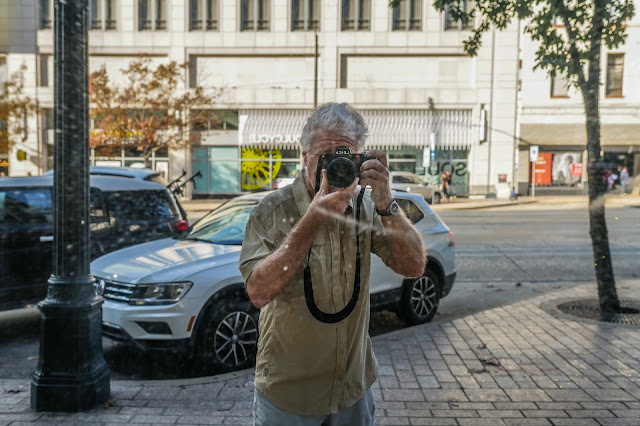 One aspect of camera design that seems to attract certain photographers is having a rangefinder or EVF window up on the top left hand side of the camera instead of centered (as in the Leica SL2 above). The position of the finder also modifies both the hold and your presentation to human subjects. With the top left finder position you don't have to worry about positioning your nose behind the camera and you have the advantage of being able to open that right eye and make contact with your subject that way.
I notice that my left arm is being held out to the side too much. It's apparent in both photos by exaggerated in the color image just above. I could work on relaxing my left arm a bit and it would probably bring a better overall balance to my stance and my own stability.
Given a choice, and all other technical aspects being equal, I will always prefer the off center finder because viewing that way makes the entire hold of the camera and its position in front of my face seem more open and flexible. It also seems to cure that feeling of eventually developing tunnel vision.
Finally, I think the smaller cameras, if they are sufficiently dense, are easier to hold better. I wish the CL would evolve. The same size body but a 35mm sized sensor. Maybe for next Christmas...?
Just a few things I thought about while at swim practice this morning.
And, by the way, five or six days out of the water, a too rich, holiday diet of too much pie, candy and other desserts, compounded by too many glasses of red wine or Champagne, is a fiendish recipe for making your first day back at a competitive workout seem like an aquatic hell-scape. I was so slow and sloppy. Exhausted by the end.  This calls for emergency measures! Bring on the blueberries, walnuts, kale and coffee. Add plenty of water, and sleep any time it's possible. I hope it doesn't take long to get back into shape but I find it usually takes training twice as long as the amount of time you've slacked off to regain your previous fitness.
Thank God I don't smoke....