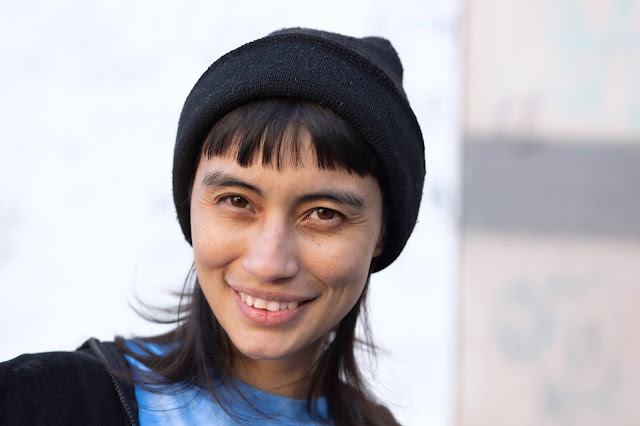 I had a fellow photographer ask me a few questions yesterday when I posted this image on Instagram (https://www.instagram.com/kirktuck/). Specifically he wanted to know: How long it took me to 'set up' this shot? Was this someone I knew well? What did I use to light the shot? How did I get the subject to smile "authentically"? Was this a full frame shot? How much post processing did I do to the shot back in the office? How do you approach someone in the street and convince them to pose? Do you use C-AF? How many frames did it take to get this one?

I guess I'll start by writing about how I was working that day and go from there. I went out with very minimal expectations so I only took a very basic camera and lens. The camera was the Leica CL, which I've been using in the raw/dng format. I generally always set the camera up to shoot in the aperture priority mode. I was being extra lazy yesterday so I left the camera in AWB and the ISO in Auto-ISO (choosing to use 1/125th as a minimum shutter speed). The lens I was using was the Sigma 56mm f1.4 Contemporary.

Halfway through my walk downtown I had an unplanned meetup with a photographer I'd met the previous week. He asked if he could follow along with me as long as he didn't slow me down. I agreed which made me think I'd end up with even fewer good shots... That's just me being an inveterate loner when shooting.

We'd been walking for a while and I noticed a profound difference in our shooting styles. He was working with a very wide lens (20mm) on a Sony camera and he would see a geometric confluence of buildings and reflections and spend three to five full minutes fine tuning and working his compositions. It was more of a process than I'm used to. It was involved and I lost patience and walked ahead from time to time and let him catch up after he finished. I was shooting with a cropped frame camera and a longer than normal lens and I shoot much faster. In fact, I think having the camera in front of my face for more than a few seconds at a time is largely counterproductive. But everyone's technique is different.

When I saw this young woman on the sidewalk with her friend they were looking at a wall of messages left by people responding to a big banner headline hung up above eye level. I walked right up to them and started a conversation, asking when the handwritten messages and the big banner showed up. What they thought about it. Where they were from. Then I asked the couple to pose together. Then I asked Veronica if I could photograph her solo.

All through our conversation I'd been semi-subconsciously figuring out what I wanted in the background. Which facial expressions I'd seen from Veronica were the ones I liked. What it was about her face that made me want photograph her. I brought the camera to life with a gentle tap on the button and immediately increase the exposure compensation 1.5 stops to compensate for the white wall behind her. I stepped forward about 18 inches, brought the camera to my eye, framed the shot and clicked the  shutter. Throughout the ensuing process I suggested expressions and poses.

I went through about fifteen or twenty frames, smiled back and thanked her very much. The whole photography process took less than 30 seconds. I was happy with six different shots from the mini-session. We exchanged Instagram info and then we gently and politely disengaged and moved on. Seemed normal to me but my companion later shared that in his culture people would be very reticent to talk to a stranger; much less to stop and suggest they collaborate on an impromptu portrait.

So, that was my process. And here are my answers to my reader's questions:

2. I had never met either of the two people before. This was my first encounter with them. We were starting from scratch.

3. I used open shade and the reflections from the buildings across the street to "light" the shot. No additional instruments or reflectors were used.

4. The subject smiled authentically at my camera because I was smiling authentically back at her. I was also minimizing the drama of the process, and insinuating through speed and a sense of sureness about what I wanted and I hoped that made the act of photographing seem as natural as saying, "hello."

5. I assume the reader was asking if this was a "full frame" shot because of the nice focus fall off and the pretty bokeh in the background. But it was just the effect of being close to the subject and using f2.2 with an APS-C format camera and a slightly long focal length.

6. When it comes to post processing I always want the subject to look good so I took off  two specks of what looked like black pepper from her two front teeth. I also whitened and lightened her front teeth and smoothed out her skin tone just a bit. I opened up the midrange via the level control in P.S., and did a tiny bit of global sharpening. I try not to do too much post processing because I never want one of my images to look obviously "worked." That includes rarely (if ever) using a canned profile.

7. I almost always use either S-AF, center focusing point or fully manual focusing. I've tried back button focusing and C-AF in the past but felt like, for me, they totally sucked as techniques. I learned to focus on a rangefinder camera and the center AF area always seems very natural to me.

8. I get people to pose by being happy, non-threatening and interested in learning more about them. I ask questions. I nod and smile at answers. I have no hidden agenda. I'm never sneaky. I don't try to "sexualize" photographs of people. They have to be interesting, as they are, for me to want to photograph them. Real connection, even if brief, is everything.

Were I bold enough to give advice to my companion of yesterday it would be along the lines of: Be more sure of your first impressions on the screen or through the EVF and work quickly. Images rarely improve if you scratch on them for too long. It only prolongs the discomfort and indecision. If you didn't get a shot because of a technical issue you might want to give up and move on because you'll rarely be able to get back to the same energy you first saw when you started making the images.

The CL and the Sigma 56mm f1.4 are a great combination.The 56mm may be the sharpest lens I've ever seen on a cropped sensor camera. Ever. Piques my interest in the 16mm from the same product line....

And so the merry-go-round revs up yet again.

Just thought I'd share my thoughts. The day ended nicely. The walk was good exercise and suprisingly productive. 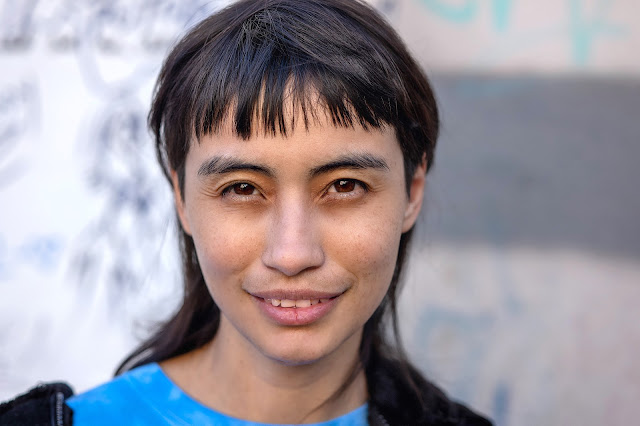 More mannequin art. Some naked. Not sure if naked mannequin posts need to be marked, "Not Safe For Work". Probably not. This was more a lens test than anything else. 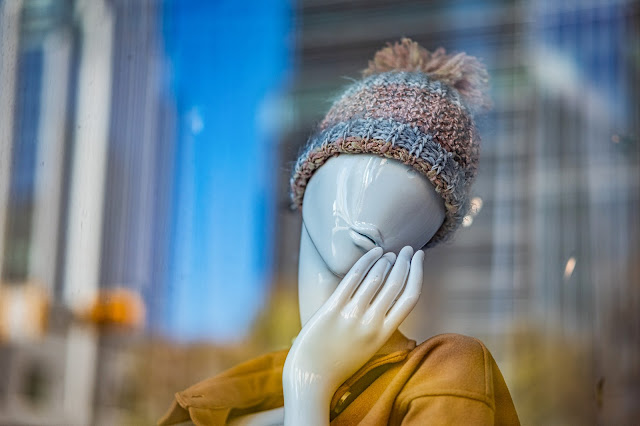 My mannequin girl friend. (Ala Weegee? -- don't get the reference? Look it up).
Newly re-costumed for Winter. Winter style bokeh.
It was such a beautiful day I wanted to have lunch out on the vast patio at the Cookbook Café. And since the day stayed nice I thought a good stroll was prudent. I'd brought along a Leica CL and small but fast lens and I thought I'd put it through its paces to evaluate the performance wide open at f1.4 and also stopped way, way down to....f2.2. The light was bright, clear and clean this afternoon and the vibe in the downtown space was downright cheery.
I know my visitors here are probably tired of mannequin photos but I find them charming because they don't move too much, are easy to work with and don't require lunch or payment. I had no intention when I left the café to photograph various mannequins but a few blocks east of the library, on Second Street, I found a funny store window that had naked mannequins with signs hung on them announcing, "inventory prep." I haven't got a clue what that meant. I thought it would be easy to inventory the clothes while they were on the delightful, white sculptures but there are parts of retail that elude me.
Once I found the naked, very still  models I decided to make a quick project of it. And so I padded along the street taking photos of various displays and presentations. I'm sure the shop clerks thought I was a crazy person but no one seemed to bat an eye. 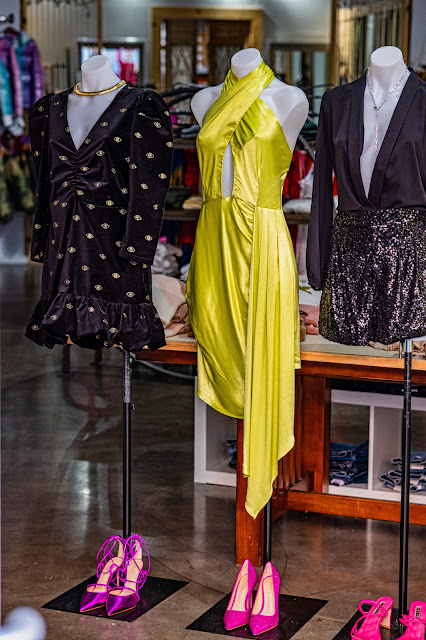 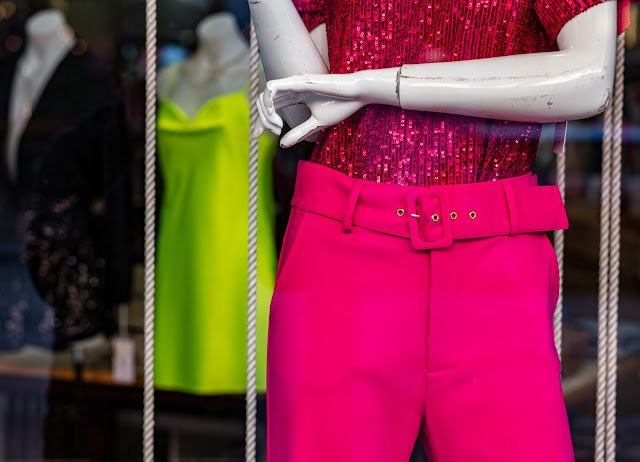 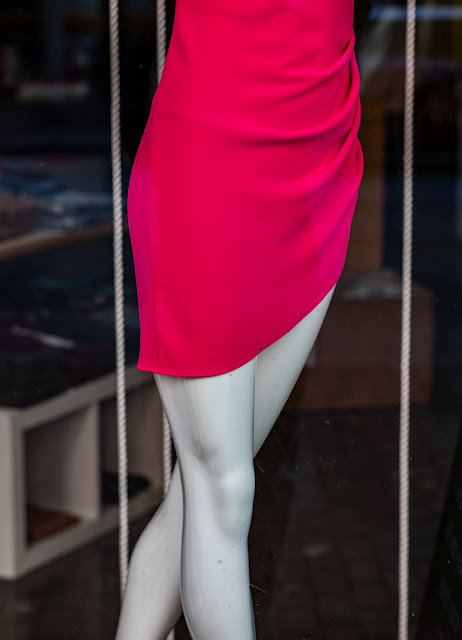 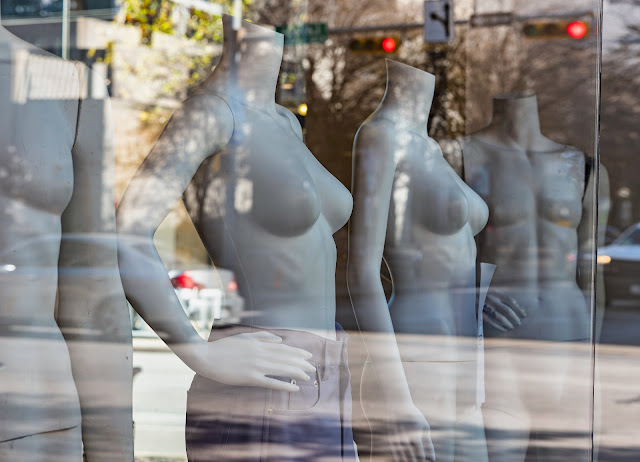 This one reminded me of a Helmut Newton photo of models in his book, "Big Nudes"
But without all the drama.... 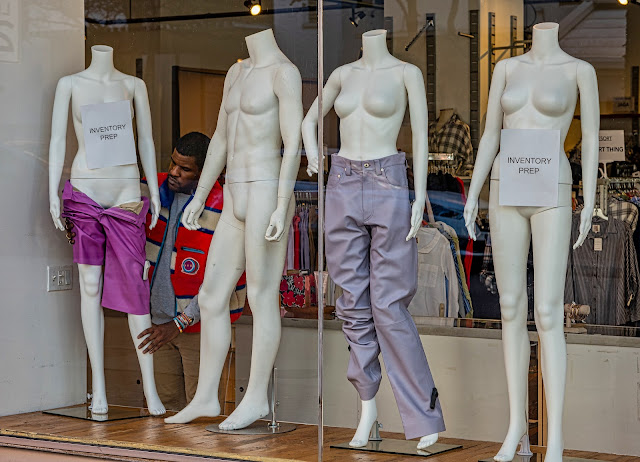 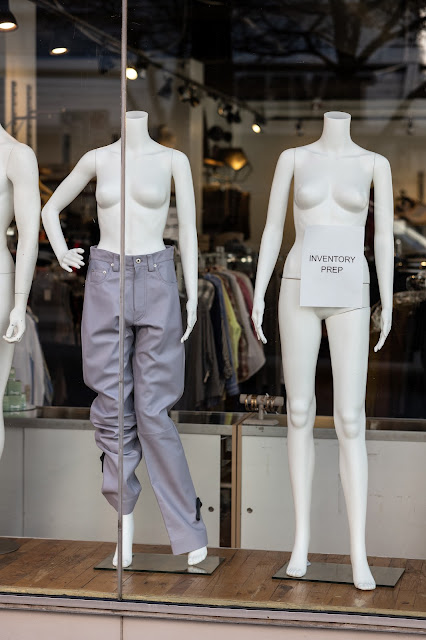 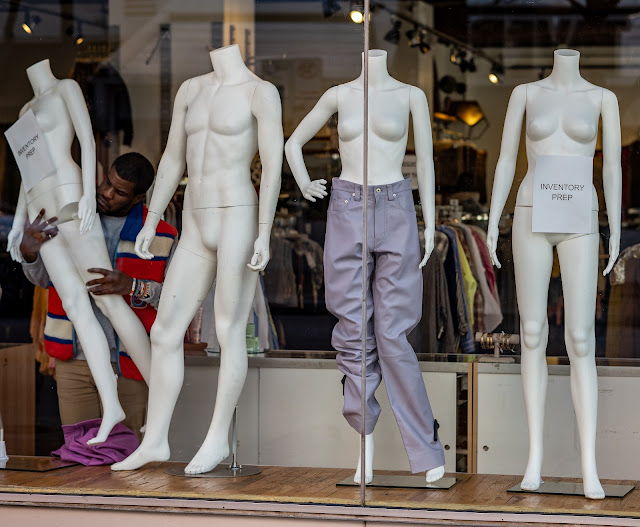 I'm coming to the conclusion that the Leica CL is a very, very good street shooting camera. I got lots of fun images with it this afternoon. And I love the photo of my favorite mannequin at the top of the post.

Hope everyone is staying happy and warm.