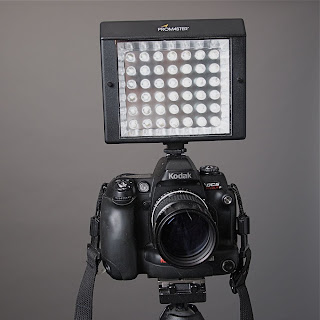 a one hundred dollar, dimmable, daylight balanced LED light source.
When I was writing my book on lighting equipment I wanted to touch on everything that was available to photographers without stepping into the insanely expensive and highly specialized gear.  I reviewed an LED light from a company called, LitePanels.  The product I reviewed is called a Micro and you can see it on there website, here.  It was designed, initially, for use on camcorders and even though the output isn't really high it does provide a nice kick of front light that helps most autofocus cameras provide faster and better focus lock on.  At the time the light was priced at $265 and had a run time of 1.5 hours.  At the time I was a bit conflicted.  I felt that it was important to mention the product and the category because it seems that LED lighting is destined to take over the continuous lighting crown from both florescent and tungsten fixtures.  The benefits of LED's are: consistency, low energy use and color matching.

So, fast forward to a couple of weeks ago.  I head over to Precision Camera to buy some memory cards and look at lenses.  I'm an addict.....what can I say?  Since I've recently redeveloped and interest in video I stroll over to the case that holds their video cameras, microphones, faux Steadicam rigs and portable audio recorders.  There on one shelf is the LitePanels Micro Pro LED

light.  Right next to it, in a bigger box is the ProMaster 42LED light

.  I have a sales person pull one off the shelf so I can check it out.  It's got more LED's than the LightPanels,  takes 4 double "A's",  comes with an A/C converter, has a control to reduce power and seems to work like a charm.  The kicker is the price tag.  It's $99.00.  It quickly became and impulse purchase and I'm glad it did.  The next week I did a job for a shelter magazine.  We were doing an article on shopping locally and we were shooting in a famous, local bookstore.  I was using my friend, Ann as a model (she's the ultimate quasi-urban, soccer mom, in shape, upscale, thirty to forty something woman) and we're shooting available light under ceiling mounted industrial florescent fixtures.  I think there's too much top light and that we're getting raccoon eyes.  I'm shooting wide open at ISO 400 and I reach into the camera bag and pull out the ProMaster 42LED.  At half power from six feet away it puts in just enough fill light to clean up the shadows and add a bit of pop to the scene.  I could have used it right on top of the camera and dialed it down until the fill was subtle and shadowless but I like just putting it on a neighboring table in the bookstore's cafe and letting it mix in.

Amazingly, the flo's and the LED weren't that far apart in color temp.  The RAW files cleaned right up in Capture One.  Since then I've tucked the light into my Domke bag just in case.  If I don't use it in the shoot I sometimes end up using it as a glorified flashlight.

The Pro's?  Cheap, light, bright, doesn't weigh much,  good battery life, A/C adapter, bigger light source than the competitors,  a shoe foot that lets you mount it directly on your camera,  and able to be powered by double "A's".

The Con's?  It's cheaply made.  All plastic.  The battery doors feel flimsy and uncertain.  The color match to daylight could be better.

The bonus points?  It comes with a plastic or resin filter that fits over the front of the light, diffuses it a bit and converts the light source from "daylight" to real tungsten. 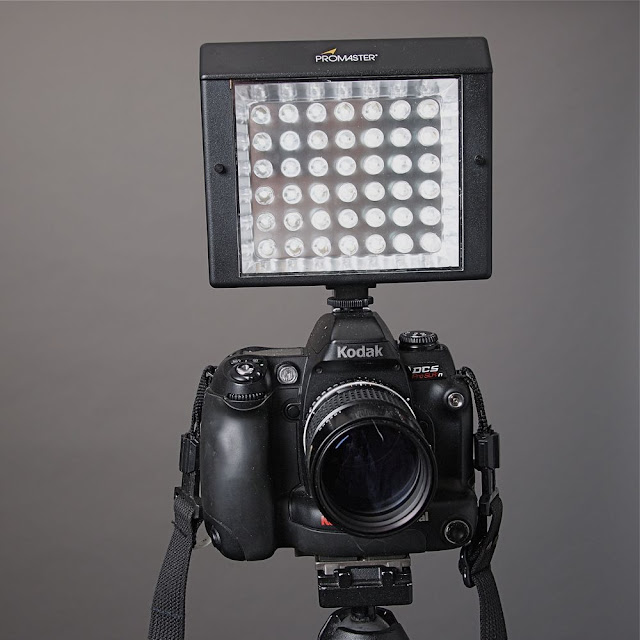 Mounted on top of a Kodak DCS SLR/n.  Shot in my studio with a little, Olympus EPL, Panasonic 20mm 1.7, lit with an Elinchrom Ranger RX Speed pack thru one head into a 60 inch Octabank.


What would I use if for?  A little kiss of fill light in an available light portrait just about anywhere.  Or even as just an "eyelight" to add some sparkle to a model's eyes. 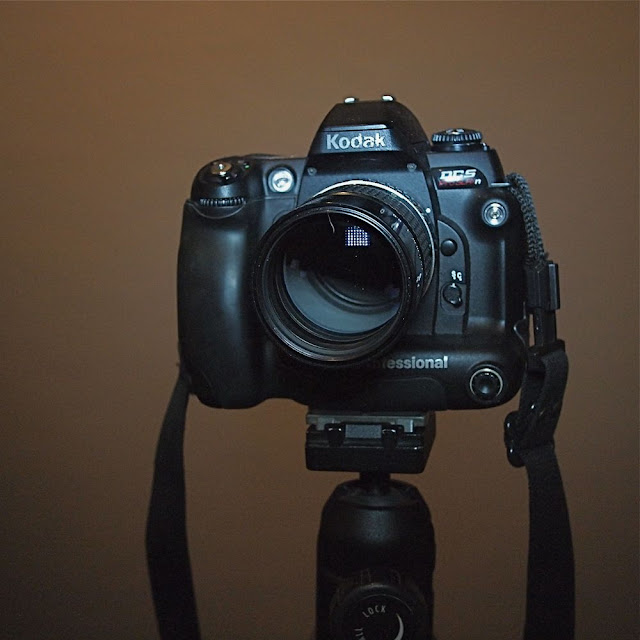 After I took the first shot with the panel on the Kodak camera I took the ProMaster LED42 off the Kodak and put it on the Olympus Pen EPL and used it as a direct light for this image.  ISO 800, f5.6 @ 1/60th (approx).  The little camera locked on quick.


If you are a Canon 5D mk2 or Nikon D3s user this may be all the light you need for Stygian weddings, breaking news and wacky studio shots.  It's so easy to set up, doesn't need to be sync'd and works at all shutter speeds.  If you own fast glass, this is your "gild the lily" light for available light situations that need a touch more control. 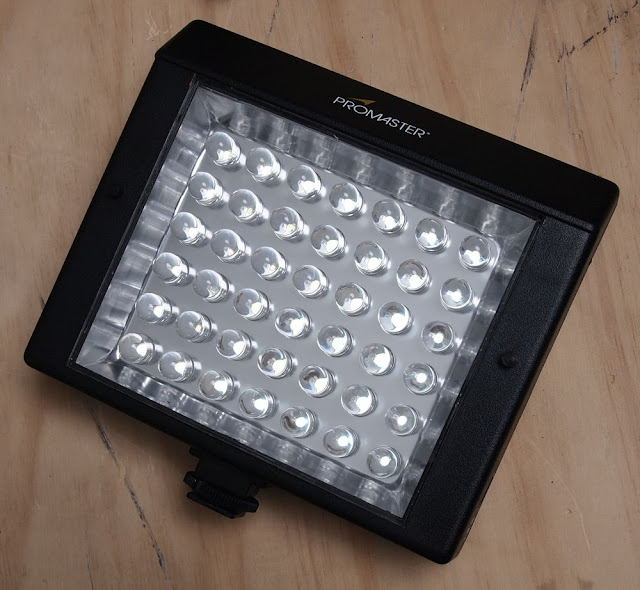 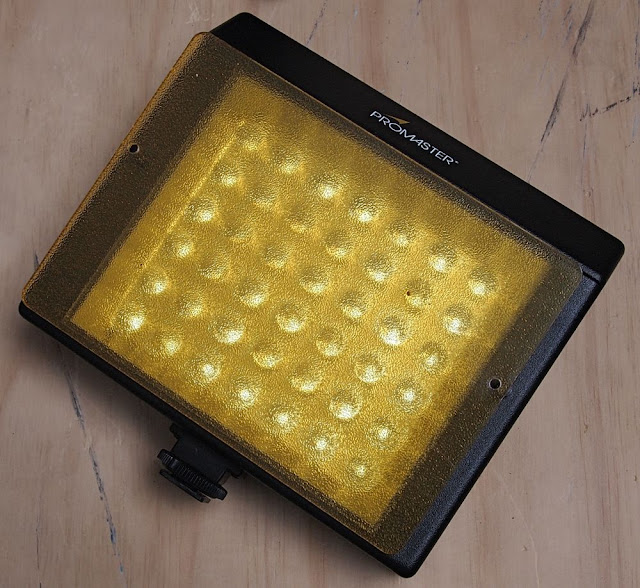 And here I've just laid the tungsten filter on top.  There are two screws that hold the filter in place on the front.  I just wanted you to see what the filter actually looked like so I didn't bother to engage the screws.


The bottom line?  I've spent more on a nice lunch with a client.  It's handy in the back of a camera bag and even handier when shooting quasi-available light video.  All lighting situations can use a helping hand.  I've been wishing for a light like this since the latter film days.  Now I have it and I can't wait to use it on more and more projects.

My next project is to shoot executives in a data center.  I'm scheduled to to it this coming tuesday.  We'll be in 60,000 square feet of florescent space.  All I really need is a little touch of fill.  I want the extensive square footage of the facility to show.  I'll go to ISO 800 on a camera with great high ISO (haven't decided which one yet.....) and then fill in with a couple of these behind a bit of Rosco diffusion material.  I'll be scouting on monday and I'll take one of these along as well as a few strengths of plus green filtration and try to work out a very slim filter pack to match up all the light sources.  If I can pull it off I may have found the "Holy Grail" of indoor fill light augmentation for a hundred bucks and a handful of alkaline batteries.  Now that is Minimalism.

Posted by Kirk, Photographer/Writer at 21:01 3 comments: