The best portraits aren't about photography. They're about connection. 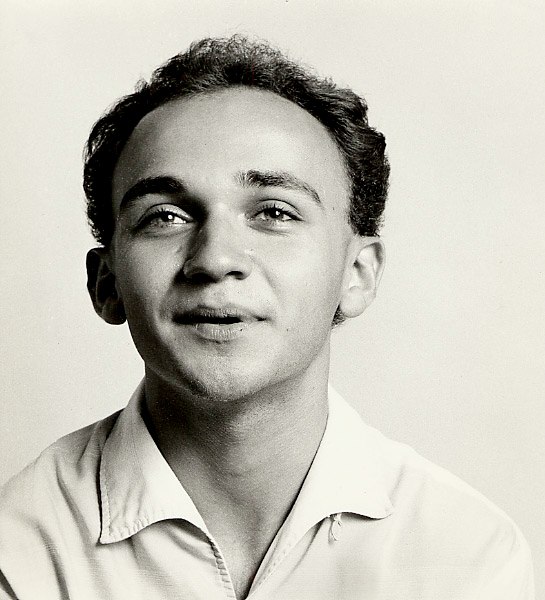 This is my brother in law, David.  He's bright, fun, super-smart, and twenty one years older than this image of him.
Shot with a tiny Novatron 220 flash in a tiny studio with a Yashica Mat 124G camera on medium speed black and white film.  I like this portrait of David better than most of the portraits I've subsequently shot on systems many multiples more expensive and sophisticated.  When did we re-aim our focus and our attention from the subject to the equipment?  How can we move it back?
I expect that the remedy is looking to our early work and finding the things in it that we like.  That's a good reason to sift thru stacks of old prints from time to time.
The outpouring of posts this evening isn't from any hypo-manic compulsion. (Well,  maybe just a little) Rather it is the result of sifting through an enormous number of old favorite photos in order to put together a presentation due up in June.  And of course there is always the five presentations I'll be giving at the Austin Photo Expo the weekend of the 15th and 16th of May.  Maybe it's also the presentation I'm giving to another group this Sunday.   It's fun to see the full circle.
Posted by Kirk, Photographer/Writer at 22:28 5 comments: 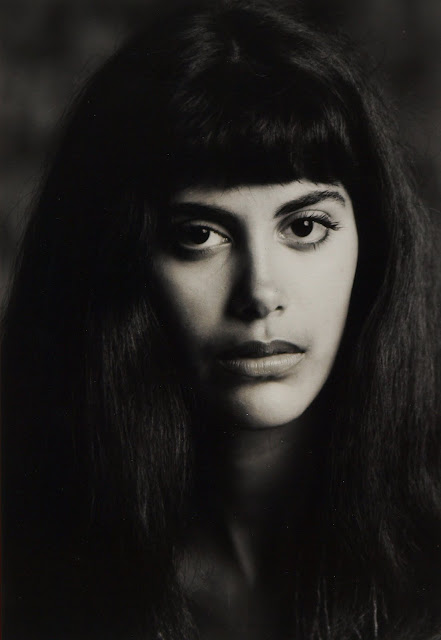 There's something about portraiture that makes it the only important part of photography for me.  I can photograph buildings and interiors and microchips if the pay is good.  I can shoot landscapes if there are interesting people in them.  (Who am I kidding?  Confronted with a nice, peopled landscape my first impulse is always to find a longer lens and to crop out all the useless background).  But the portrait is without a doubt the highest expression of photography and, indeed, of all the two dimensional arts.

I'm not sure why but I think it's the same reason why we are so intrigued by beauty.  We want to freeze it and understand it.  We are captured by our imaginations and by the vagaries of human mythos.  Our collective cultures are littered with stories of handsome princes, beautiful damsals, sirens, goddesses and fairies.  Anthropologist tell us that we are drawn to certain types for biological reasons.

I think it's more like a dance.  The better the partner the more thrilling the dance.  The greater the collaboration the more thrilling the portrait.  In the end we're all trying to understand beauty and our relation to it.  It's all proximate.  It's all ephemeral.  And it's the ephemeral and fleeting nature that makes capturing it on an individual basis so bitter sweet......
Posted by Kirk, Photographer/Writer at 21:52 4 comments:

Another Lens I Deeply Regret Selling. 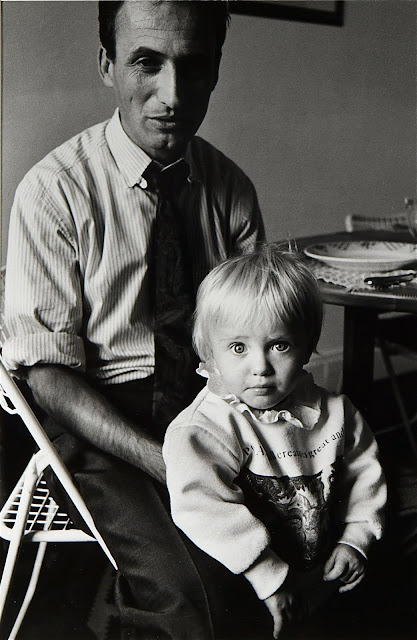 Sometime in the 1990's I was asked to go to Paris and do a two week job.  It was one of those photographer dream jobs in which a major manufacturer of a product you love using asks you to please take ooodles and ooodles of their product and use it up for free.  Afga was about to introduce their APX black and white films   (incredibly beautiful emulsions in 25, 100 and 400 ISO's) and they needed a bunch of samples showing off what the film could do.  We chose Paris for fun.  It was late October.

At the time I was shooting with the Canon EOS system.  Had I been on a personal shooting trip I would have left those heavy cameras at home and just taken my little Leica and a few small lenses.  But I knew I'd really have to produce a range of images so I shouldered the bag and headed over.  The two weeks were cold and grey and fun.  I have thousands of negatives I've never printed and hundreds that I have.

This is one of my personal favorites from the trip.  I was staying with a college friend of mine who, conveniently, is French and still lives in Paris.  I'd put him up and he puts me up and it all works out well.  One day we got invited to lunch at the apartment this family lived in.  I don't remember lunch nearly as well as I remember crouching on my knees with an EOS-1 and the original 85mm 1.1.2 lens in my hands, trying to catch the last grey wave of pre-winter light gliding liquidly through the a tall window.  Hoping my technique was sufficient to handhold the rig at 1/30th of a second.

The father is falling into the shadows of the window edges.  The child got more exposure.  It's a tricky negative to print.  But it was only possible to take it because of the speed of the lens.

When I got back home I decided that the 85 was too heavy and too slow to focus so I sold it or traded it for some other shiny object.  Only later, when I took the time to print this image as a large frame on a sheet of 16x20 inch fiber based paper did I realize my mistake.   Believe me,  it's the lenses you passed up or sold on a whim that you will pine for down the road.  Not the cameras.
Posted by Kirk, Photographer/Writer at 21:41 1 comment:

Moments Plucked Out Of Time. 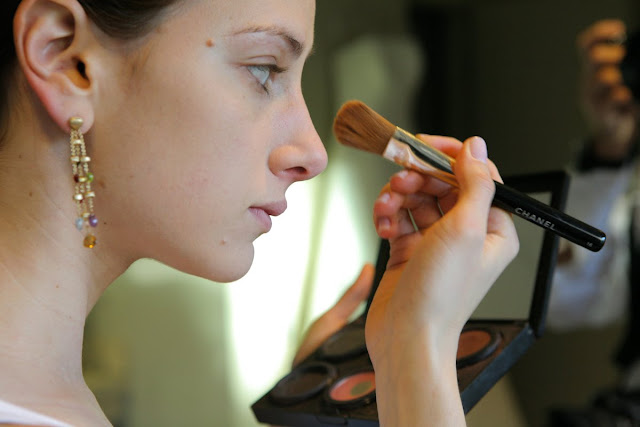 A Random shot at a wedding I did for some friends.


We think of the whole field of photography as something that moves forward with different styles but we feel that its basic nature doesn't change very much.  But I find that it isn't true.  In the past decades the core of photography seemed to be more about "discovering" truth and beauty in the world.  Now it seems more possessed with using the world as raw material.  A big canvas on which to paint with multiple flashes, filters and gimmicky techniques.  Once upon a time recognizing and capturing beauty or history sufficed.  Now that sensibility seems to have been relegated to the old box in the attic, filled with black and white prints and old flash bars.

I was photographing a wedding and I turned around to see this woman putting some powder on her face.  I tried to make a good composition.  I snapped the shot.  I'm pleased by her profile and her rapt attention to the tiny mirror in her powder case.  I love the shaft of light in the background.  Nothing needed to be lit.  Nothing needed to be post processed or HDR'd to death.  Multiple flashes would not have made the scene more tranquil and happy for me.

In fact, I liked it so much that I tried another angle and another version. 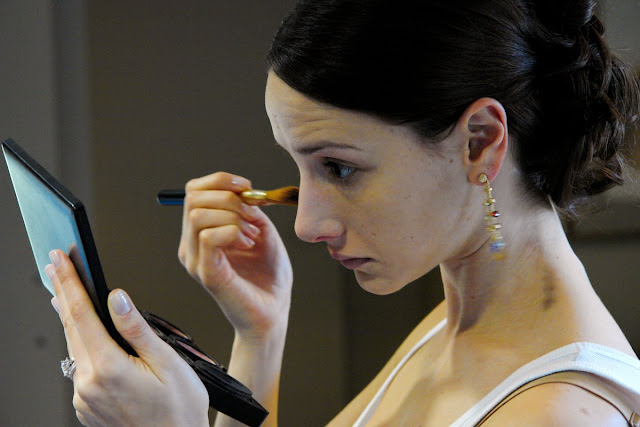 I had lunch with an art director today.  We talked about styles.  They all come back around.  I think, collectively, we've been through a visual period akin to the tequila drinking binges of college fraternity boys.  We might be ready to go back to sipping a cold beer on the back porch.    Just a thought.
Posted by Kirk, Photographer/Writer at 21:27 2 comments:

The Argument in Favor of Obscure Lenses. 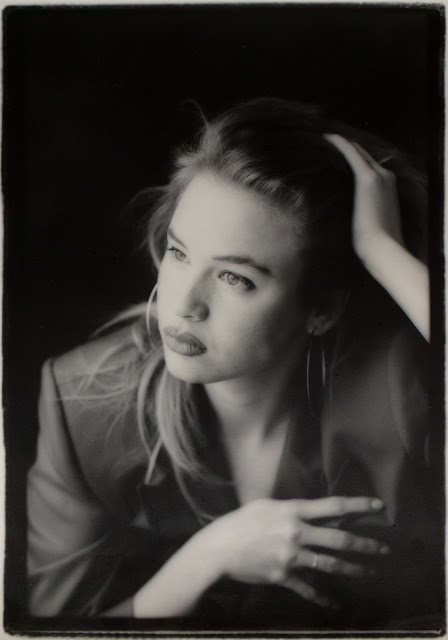 I've always loved this image.  It's of the actor, Rene Zellweger long before she acted in her first movie.  Probably shot in 1991 or 1992.
Of course I love the pose and the hands and the way the images falls off to black but I also love the look of the lens that was used to make the image.  These days everyone is obsessed with absolutely sharpness above all things.  Well, that's not entirely true......some amateurs are also obsessed by home many different focal lengths you can cram into a zoom lens.  But most photographers love the process of quantification and measurement (I know I do....) and so DXO test that "objectively" measure overall quality reign supreme.
But what if you don't want pathological sharpness?  What if you're looking for a softer portrait?  A more subdued landscape?  Are there other lenses that no one ever talks about.
I took this image nearly twenty years ago but it's important to understand that the EOS system was already on the market.  In fact, the same lens mount is still in use and the lenses designed for the EOS film cameras are still around.  I shot with some Canon EOS film cameras back then and in this instance I used a lens that I didn't appreciate as much as I should have.  It was Canon's 135mm f2.8 soft focus lens.  It had a setting ring on the front that would allow you to dial in three strengths of softness or use the lens as a very sharp optic with no "negative correction".  I'm pretty sure it worked by introducing aberrations or softness by putting the elements at the "wrong" distance to each other.
At any rate, Rene and I were just messing around in the studio on a Saturday morning.  Her right arm is draped over the back of an old wooden chair that I also neglected to appreciate enough.  To her right (camera's left) I was using a 250 watt incandescent light bulb shining through a tattered and stained 40 inch umbrella.  I had a stack of softboxes at the time but came to think of this umbrella as magic.  I think I still have it.......  The umbrella was as close to Rene as I could get the curved surface while the light was as placed to just evenly cover the edges of the umbrella.
I souped the ISO 50 Pan F film in Rodinal 1:100 for nearly 18 minutes and made the original print on a soft surfaced (G surface) Kodak paper.  I've reprinted it many times but it just wants to be printed on a matte surface.  The above image is a copy shot of the print.  It conveys what I want you to see better than a scan of the un-interpreted negative would and retains the lower contrast feel of the paper.
That lens is long gone from my equipment drawer but every time I see this image, and others from the same day,  I have a twinge of regret that stings just a bit.  I let the momentum of the market push me onto a different path and spent years chasing sharper, sharper, sharper  when I should have let the subject whisper to me just how it wanted to be portrayed.
There are other lenses that I regret selling.  I'll try not to make that mistake again.......
Posted by Kirk, Photographer/Writer at 21:13 7 comments: