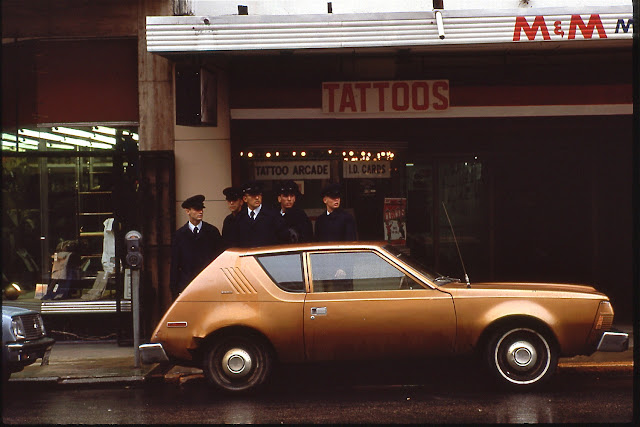 I'm working on an ad project where I need to drop an Italian street scene into the background of a photograph.  The client is wonderful and I wanted to make sure they had a range of options to choose from.  I've been to Italy a number of times on jobs and shooting for myself so I opened up the filing cabinet and started to go thru the thousands and thousands of slides and medium format transparencies I have accumulated over the years.

My eyes wandered over to a different part of the filing cabinet to a folder entitled, "Old Street Scenes."  I fumbled around in it and found this photograph.  That car, if I'm not mistaken, is an American Motors Corporation Gremlin.  The predecessor of the AMC Pacer, and other fine cars.

It was taken on the streets of San Antonio.  When I look at it I realize that it must have been taken about thirty years ago.  It was my pleasure to take dodge work, drive down to San Antonio in my old Volkswagen Beetle, and walk around in the streets taking photographs.  In those days the streets were teeming with air force recruits who would come to one of the three or four air force bases in the area for basic training.  Downtown was less savory then.  Tourism wasn't as vital.  Some streets were wall to wall tattoo parlors broken up by seedy bars and military surplus shops.  That made shooting in the streets a lot more fun.

I'm going to be this was taken with a Canon TX SLR camera and a 50mm lens.  Mostly because that's pretty much all I had back then.  Fun to see history.
Posted by Kirk, Photographer/Writer at 03:05 8 comments: