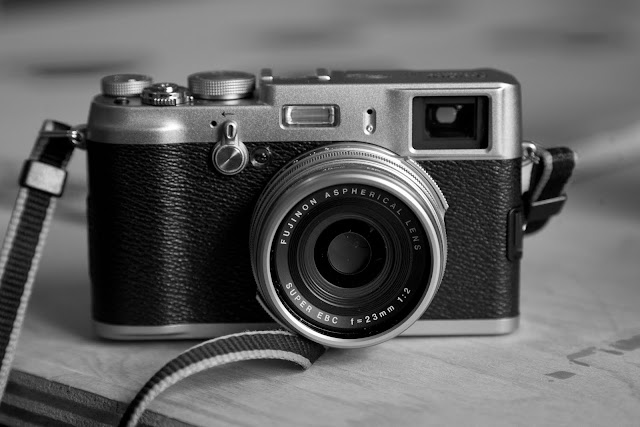 I was not as clear as I should have been about the optical finder on the camera.  In the past I've been a big proponent of EVF's but I glossed over how good I think the optical finder on this camera is so let's revisit it just for a moment.  You have a choice of viewing your taking image three different ways.  The first is like a tourist:  looking at the live view on the LCD on the back.  Not ergonomic unless you are on a tripod and using a loupe.  The second is live view in the eye level electronic viewfinder.  This is kinda cool because you can see a simulation of how the camera will handle the exposure you've set as well as the
color balance and any filter settings you might have engaged.  Pretty cool feedback if you are in the learning mode.  But supposed you are in the purist mode.  Here's where the camera shines, in my estimation.   Set the camera so that you are using the optical eye level viewfinder.  Turn of the record/review on the main, rear screen.

When you bring the camera to your eye and hit the shutter button to focus you'll see a white rectangle that serves as your frame for accurate composition.  Notice that the frame moves up and down and left and right as you focus near or far.  The camera is moving the frame to compensate for parallax.  Over the the left of the finder you'll see a scale that lets you know if you've dialed in exposure compensation.  You can also move the focusing point.

Now what you have is a camera that's removed many layers of distraction.  If you practice with it for a week you'll find the technical interface disappearing and being replaced by a more intuitive sensibility.

This is the charming part of the camera that "old-timers" keep referencing.  Jan says the camera styling is like putting an old phone dial on an iPhone but I disagree.  The design of the body is echoing the time honored ergonomics of the rangefinder genus.  Form is following function.

This is what makes the x-100 unique.  If don't value this feature then the camera is probably not a strong choice for you.  But as person who's extensively used rangefinder cameras I have experienced first hand how freeing it is artistically to have your camera become, for all intents and purposes, more transparent.

Note:  After I posted this my friend (and very able photographer), Jan Klier sent me a note pleasantly disagreeing with a few things I said previously about the camera.  I figured it would add to the discussion to append Jan's reply so I asked him if I could.  He obliged.  Here's his point of view:


I totally get your point about the camera ergonomics being such that the camera disappears. In fact that is why I just recently bought a rangefinder for my street shooting, because I didn’t want to carry my Canon 1N around. It’s not conducive to the type of photography you want to do on the street or when you’re just out and about and want a ready-to-shoot, not overly complex camera that doesn’t grab everyone’s attention. It allows you to interact with your environment and bring the camera in when desired. The one I bought recently is a Cannonet QL17. Can’t get the mercury batteries anymore, so no AE no AF. Just purely mechanical, simple 35mm film. Requires solid technique, but not much thinking. Just what you want.


But I’m also a stickler when it comes to product design. I hate products that have crappy, thoughtless, or confused design. My iPhone analogy actually had a specific point – the other day I was listening to NPR on a story about Steve Jobs, and the fact that the four most influential innovations of the computing age are all attributed to him. He’s obsessed with product design, and rightfully so. In fact the story recalled how they went back and forth on the material choice for the box the iPhone ships in and measured how long it takes for the iPhone to sink into the box when placed, to approx 4s. It’s all about the experience. There are many features that are missing on the iPhone, but those are conscious choices and saying ‘no’ as often as saying ‘yes’ in order to have a consistent design where every minute detail is thought about and has proper intent.


That’s the aspect that I find so jarring about the X-100. There’s no clear intent, it’s a compromise that’s pleasing too many. It’s like a Samsung phone instead of an iPhone. Here’s I think how that camera could have been designed (single choice, not multiple choice):


-          Focusing on retro – people that like the styling of the old range finders, but just don’t want to bother with film: Build a camera that looks and works just like a film camera, with the one exception being the medium. Use the classic elements and design of alloy chasis, etc. Even go as far as limited ISO choices to typical film (100, 400, maybe 1600). And then just insert an SD card where the film used to be. No LCD. You can see what you got when you download the card.
-          Focusing on rangefinder ergonomics – people that like a simple camera that disappears in the background but performs superbly. Build a range finder with great LCD, digital control, ideally may be a touch screen or other advanced control. Build it solid, but use modern product design standards, such as the iPhone. No dials and levers. Just buttons (unless touch screen). Make it best possible user interface that does what range finders do – intuitive, focused on the essentials. Don’t put stupid gimmicks like video in it.


PS: The review of the X-100 on Luminous Landscape made a similar observation about the design of the backplate: http://www.luminous-landscape.com/reviews/cameras/fujifilm_x100_test_report.shtml. He called it the ‘A-Team’ for the top controls, and the ‘B-Team’ for the backplate.